Accessibility links
Making Sense Of A Scandal-Fractured Family In 'Houses' Karen Olsson's novel follows a woman who returns home to care for her ailing father, but also in the hopes that she can get him to open up about how the Iran-Contra scandal ended his career.

Making Sense Of A Scandal-Fractured Family In 'Houses'

Making Sense Of A Scandal-Fractured Family In 'Houses' 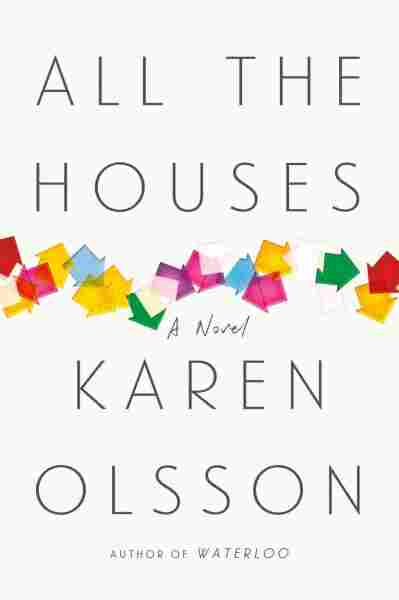 For the subset of Generation X Americans too young to remember Watergate or Abscam, the Iran-Contra affair was the first major political scandal to come across their radar. There was a period of time in 1987 and 1988 when you couldn't turn on a television set or open a magazine without seeing one of the familiar faces: Oliver North, Fawn Hall, Caspar Weinberger. After a while, it started to feel like, in a way, you knew them.

Of course, most of us didn't know them at all; we just heard their testimonies, speculated on their innocence or guilt. It's unlikely that many people gave much thought to what effect the scandal had on the families of the accused. But that's precisely the focus of the excellent All the Houses, the new novel from Waterloo author Karen Olsson.

The book follows Helen Atherton, who has tried, and mostly failed, to make a career for herself in Hollywood. When her father, Timothy, suffers a heart attack, she flies to Washington, D.C., to live with him while he recovers. Helen has begun to consider writing about Iran-Contra, the affair that ended her father's career in government, and she's hoping to get her dad to open up about the scandal that stressed their family to an eventual breaking point.

It's not easy. Timothy, who worked for the National Security Council when the arms sales occurred, is reluctant to discuss it. He and his then-wife tried in vain to shield their three daughters from the news when the scandal broke; of course, it didn't work. But Helen and her sisters still don't know the whole story: "To this day I don't know whether to think of him as a coconspirator or a complicit bystander or just someone who was in the wrong place at the wrong time," Helen thinks.

Helen isn't just forced to deal with her reticent father. Her older sister, Courtney, also lives in Washington, and her younger sister, Maggie, visits occasionally from New York. Helen gets along with Maggie, but no so much with Courtney; the two have, at best, a tenuous relationship. When they all get together, the results are less than ideal: "The trouble with sisters is this: any time you have more than one of them, the configuration is highly unstable."

All the Houses isn't a straightforward narrative. The final third of the book goes back and forth in time, and the reader learns the backstory of the family's slow collapse. Olsson never overplays her hand — while there's plenty of emotional tension, she never succumbs to melodrama; every character is remarkably real.

Novels about political scandals can often become mired in inside-baseball details, with cartoonish heroes and villains. But Olsson's take on Iran-Contra is measured and almost subtle. Helen is conflicted about her father's role in the affair, even expressing a grudging sympathy for Oliver North. She treats the scandal as almost an anticlimax, lacking in closure: "Nobody went to prison, and those few that were convicted were later pardoned by the first President Bush. The main figures in the scandal had gone on to well-paying jobs in the private sector, and Oliver North had almost been elected a U.S. senator! As for my dad, it was true that on paper he'd done fine. But there was more to it than that."

All the Houses isn't really about Iran-Contra; it's about a family trying to piece itself together after being broken in a public way. Olsson handles her subjects gently; she's not afraid to show her characters' flaws, but she treats them all with a real sense of sympathy. And she writes with a clear eye that's free from sentimental nostalgia, even though nostalgia is, in a way, a central subject of the book.

It's a funny, sweet and beautifully written novel about a young woman trying to make sense of both her family and her nation's history, which have become more intertwined for her than most people would be able to understand. Olsson makes a wonderful case for dealing with the past and trying to move on, even when it's painful. As Helen puts it, "More adversity was still more life. More adversity made more life happen."