Accessibility links
Need To Turn Buzz Into Votes? Trump And Carson Bank On Ground Games The political world long doubted that unorthodox candidates Donald Trump and Ben Carson were building traditional campaign infrastructure. But on the ground in Iowa, it sure looks that way. 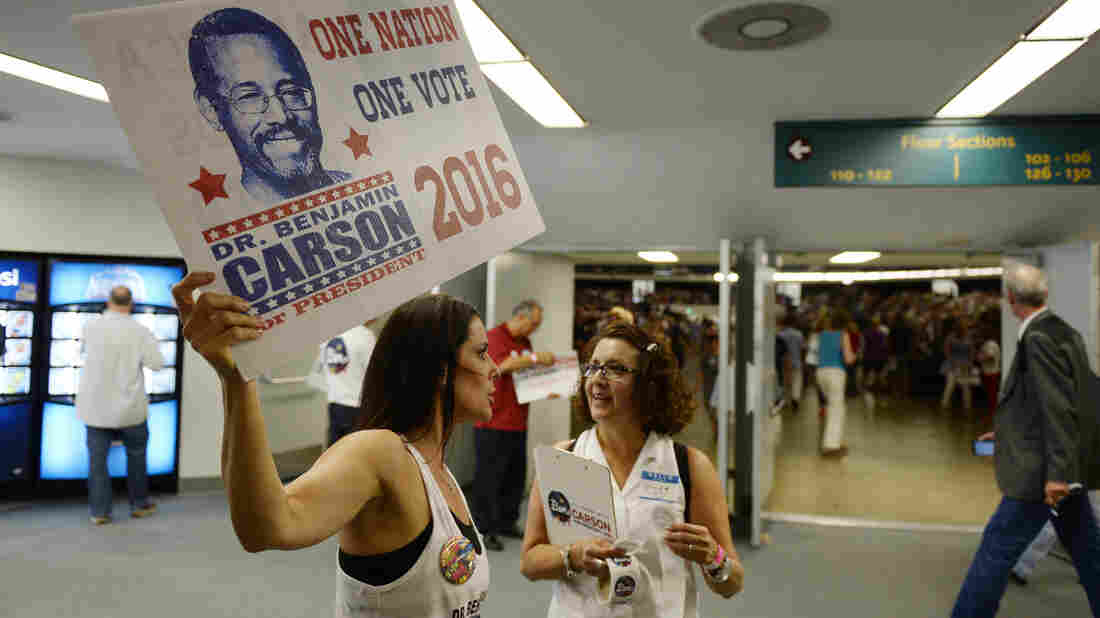 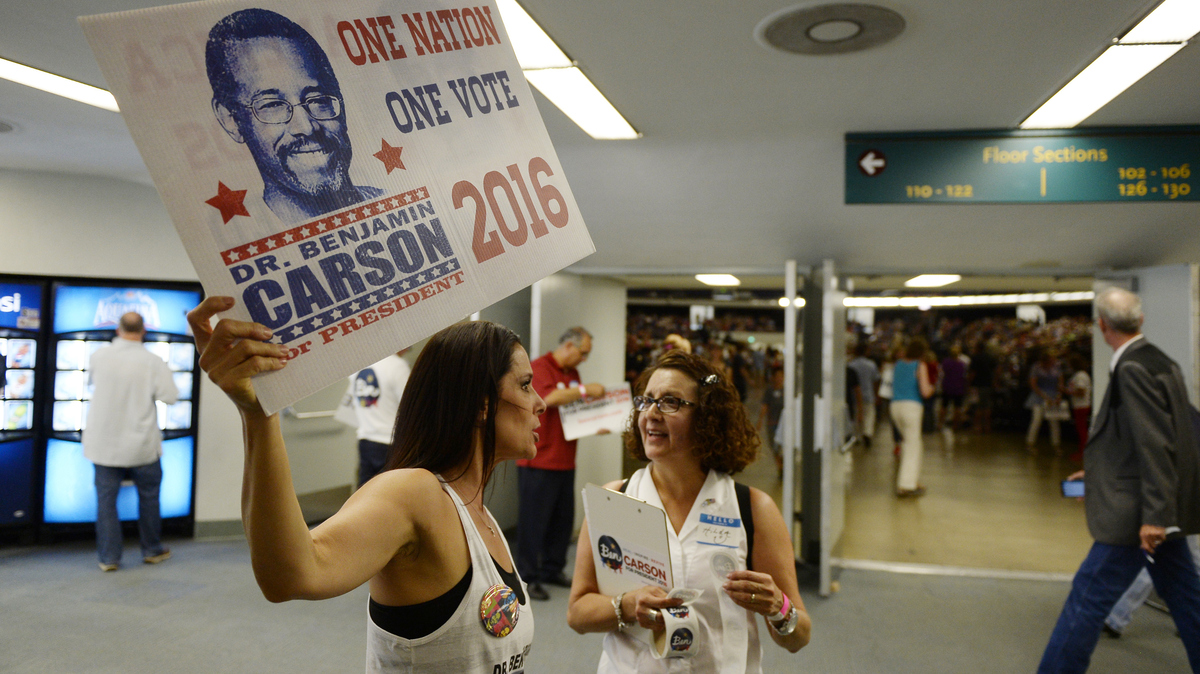 Ben Carson volunteers hold campaign banners and a clipboard as they direct supporters at a rally in Anaheim, Calif.

Ben Carson and Donald Trump have very different personalities — one is as low-key as the other is over-the-top bombastic. They currently lead the rest of the field in the GOP presidential race and, unlike many political newcomers, each is building an organized ground game in Iowa to make sure his supporters actually turn out for the Feb. 1 caucuses.

At a recent Trump rally at a Sioux City high school, loudspeakers blasted an unofficial head-banging campaign anthem by Twisted Sister, to pump up the crowd for the candidate who wouldn't speak for another hour.

If there's high winds, how's your grandma gonna get to the caucus? You better say you're taking her, right?

As people arrived, volunteers worked the parking lot and sidewalks asking attendees if they would "like to help with the caucus" and "help talk to your friends and neighbors about coming out on Feb. 1 to caucus for Donald Trump?"

"Not sure yet," one voter replied.

At this point, most Iowans haven't made a final decision either — but having their names in a campaign database is critical to a candidate who hopes to win them over.

Inside the rally, still awaiting Trump, the focus turns to caucus night, and getting ready for February weather.

"Are you prepared? Do you have a backup plan if there's a blizzard?" asks Tana Goertz, an Iowa native who starred on Trump's hit TV show The Apprentice. She's now his Iowa campaign co-chairwoman. 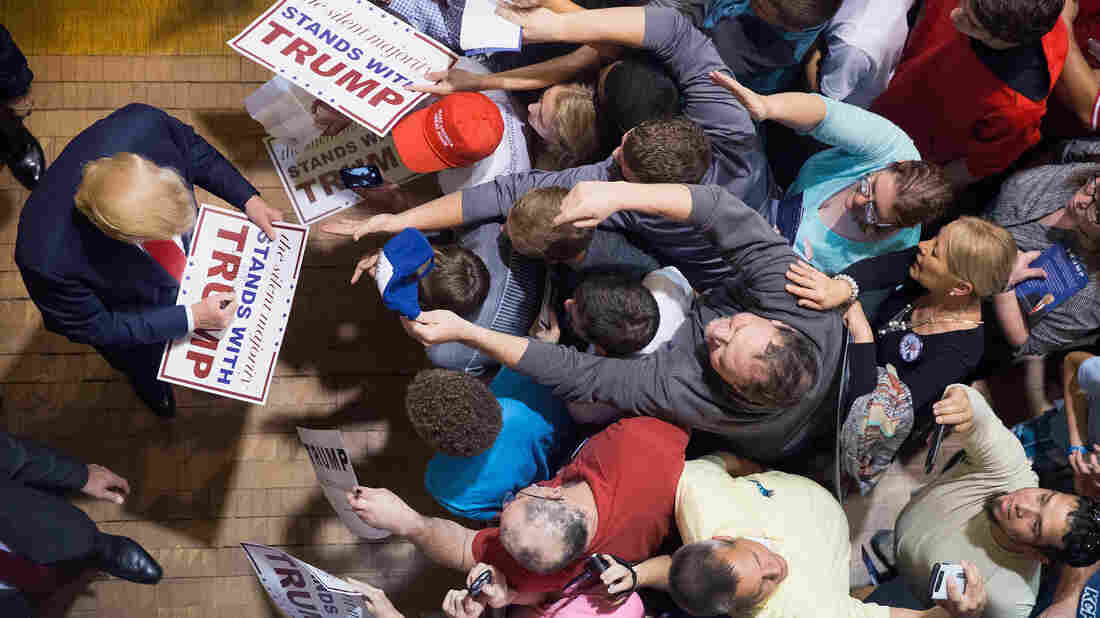 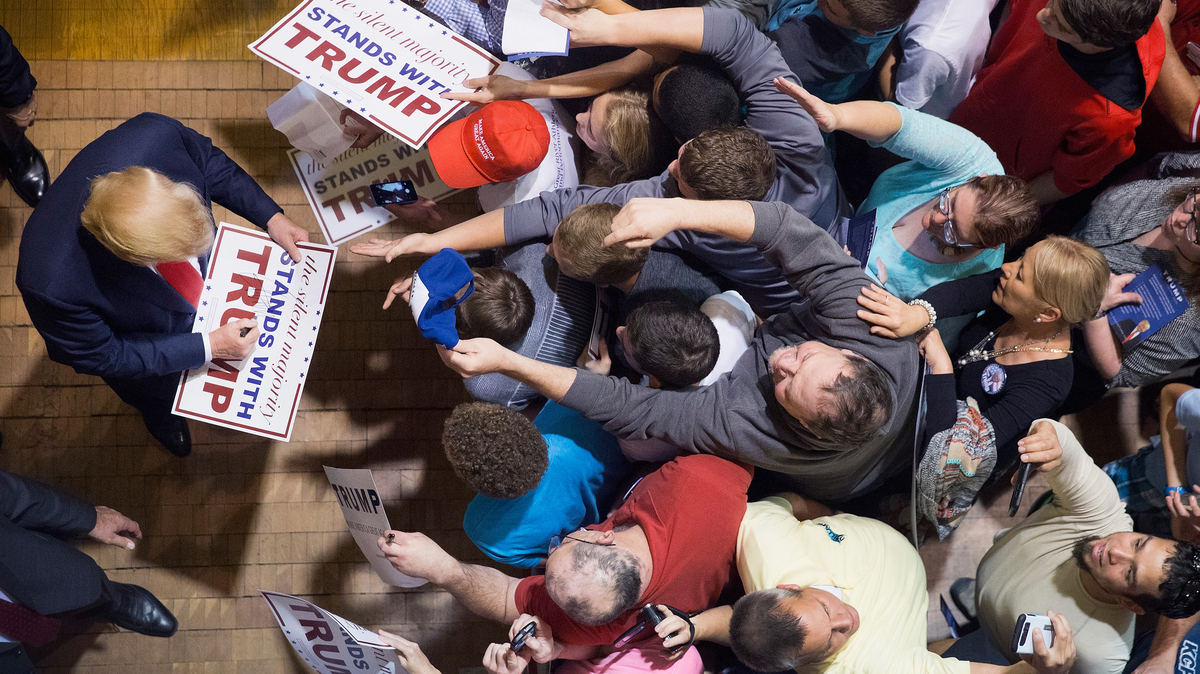 "If there's high winds, how's your grandma gonna get to the caucus? You better say you're taking her, right? Raise your hand if you're bringing somebody to the caucus," she continued.

The question about Trump from the beginning was whether this was a real campaign. But here in Iowa, he hired top staffers who know how to run a caucus. He's doing the things serious candidates do.

"The Trump campaign does have a real organization and they have really savvy operatives," said John Stineman, a veteran Iowa GOP strategist. "And my understanding is that they have a pretty robust data operation as well."

Like the candidate himself, Ben Carson's operation is low-key and less dynamic than Trump's. But he has tremendous appeal among evangelicals. That's important here.

"We have money, we have resources and we have people who are putting those resources to very good use," said Carson's Iowa director, Ryan Rhodes. He's a founder of the Iowa Tea Party and says they are organized in every Iowa county.

And Carson has another important weapon — Facebook. He has 4.5 million followers, more than any other candidate. He uses it to target Iowa voters.

Rhodes says it's about finding new backers, and connecting with those already on board.

"At the end of the day, nothing's firm until the vote's cast," he said.

For a candidate to succeed in Iowa, he needs both buzz and organization. Carson and Trump are both working hard now to lock in voters — especially because the buzz can be fleeting.