Accessibility links
Deep In The Amazon, An Unseen Battle Over The Most Valuable Trees For generations, the rubber tappers of the Amazon have gone about their business in a way that preserves the rain forest. Today, they are increasingly in conflict with criminal logging gangs.

In this part of the Amazon rain forest, they call it "the war over wood."

It has front lines.

One of them is here, in Machadinho d'Oeste in the western Brazilian state of Rondonia. 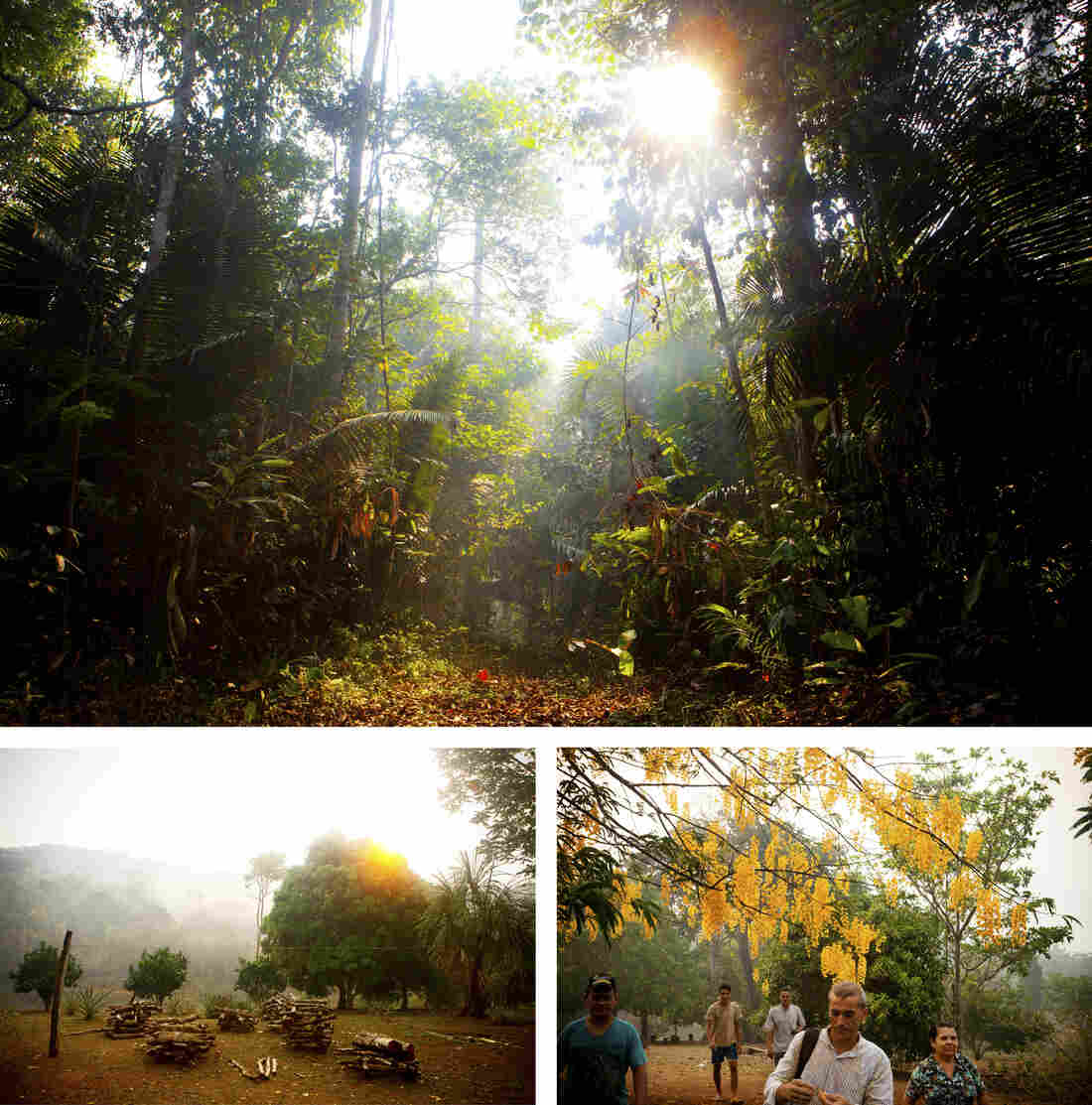 The self-described "Guardians of the Forest" defending the land don't look like fighters, at least when we first meet them. But they are pitting themselves against criminal logging gangs that have infiltrated their protected reserves.

In their everyday life, they are rubber tappers. They take us on a trail that leads to their rubber trees, which grow wild on the reserves where they live. These trees are native to the Amazon region, one of the most dangerous places in the world to be an environmental defender.

Tappers milk the trees for their sap by cutting them and collecting what comes out in small metal buckets. It's what natural rubber is made from, and it's completely sustainable. As long as the trees live, they can be used this way. 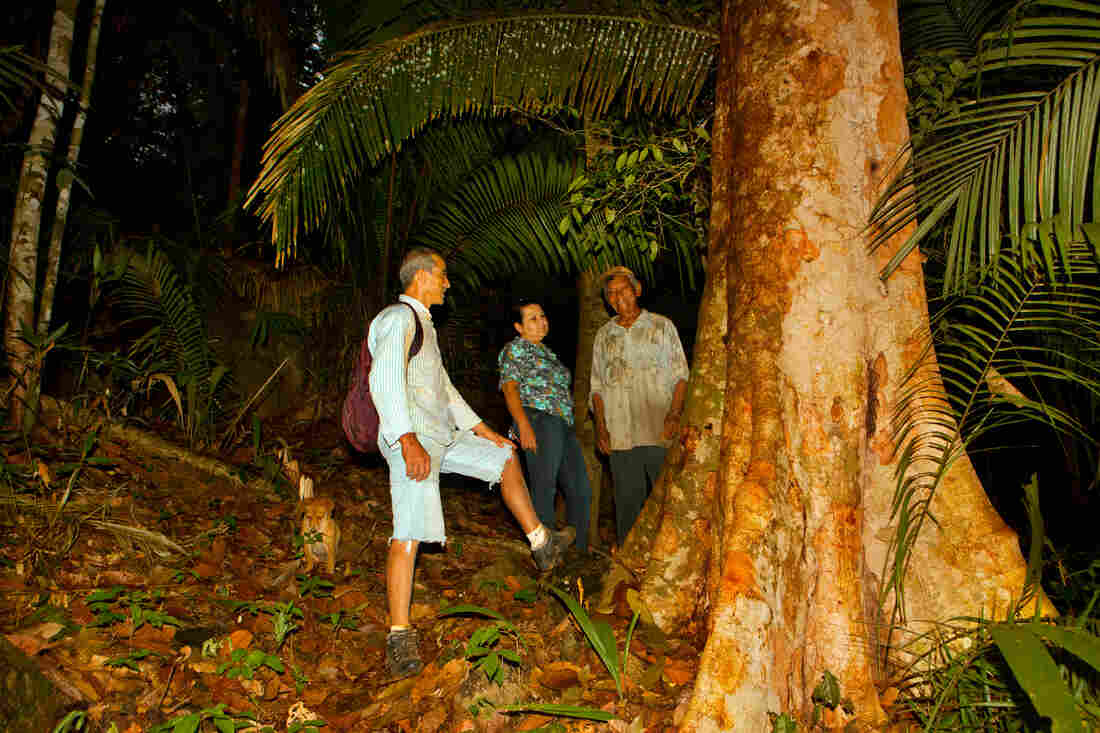 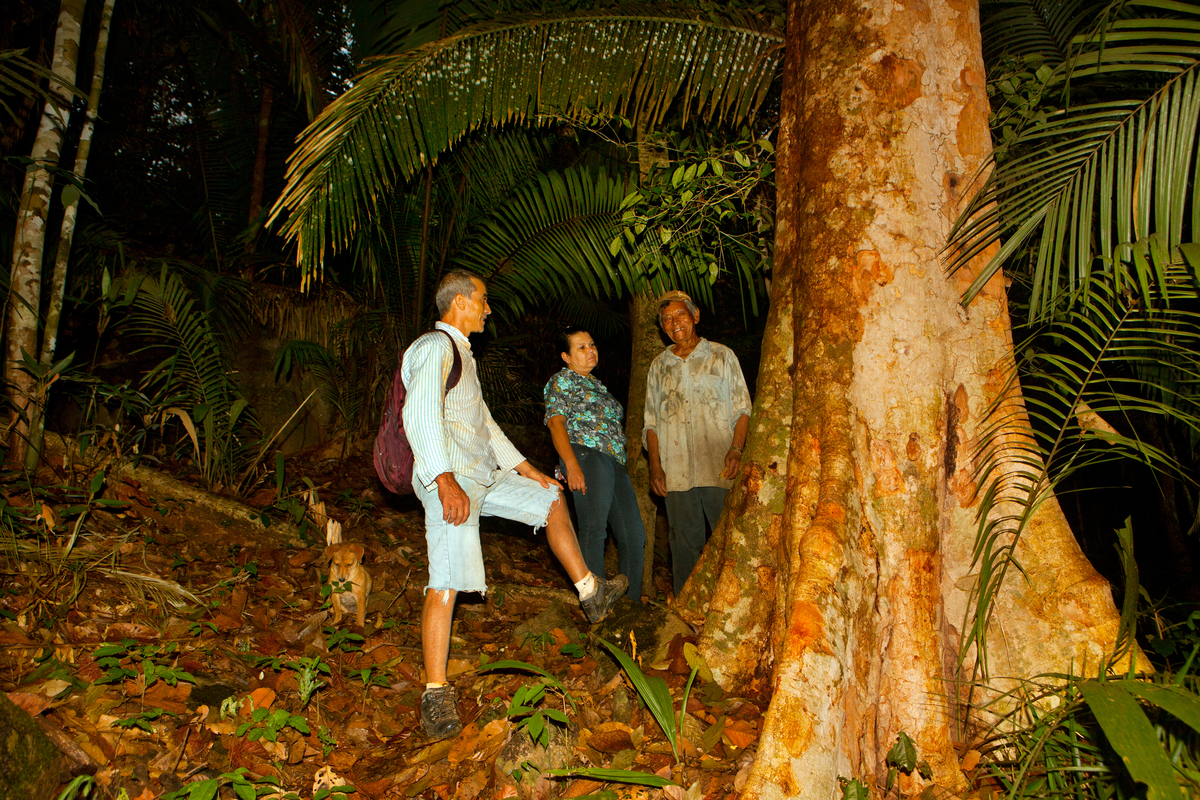 The rubber tappers use a whistle that mimics a local bird as they move from rubber tree to tree. They say they use it to disguise themselves in the forest so they won't startle the wildlife.

With us is tapper Antônio da Silva, age 88. He's been a tapper most of his life.

Antonio takes us up a steep, jungle-covered hill. I'm out of breath, but he pats his belly and quips that rubber tappers don't get fat because of daily workouts like these. 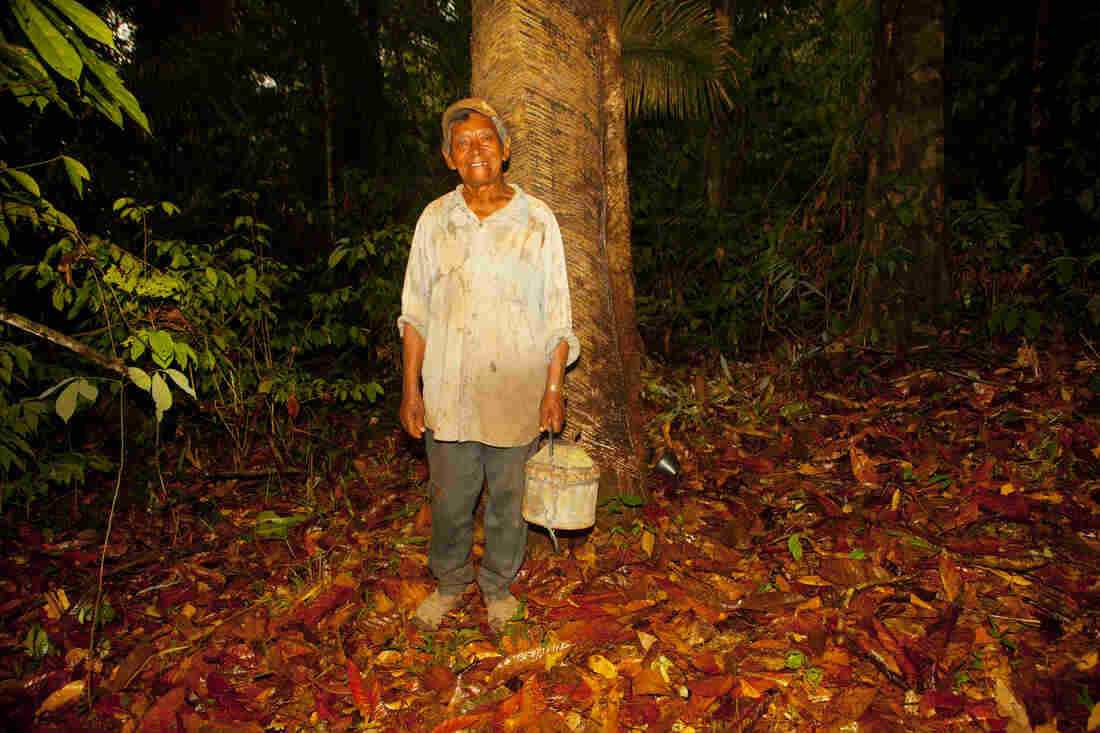 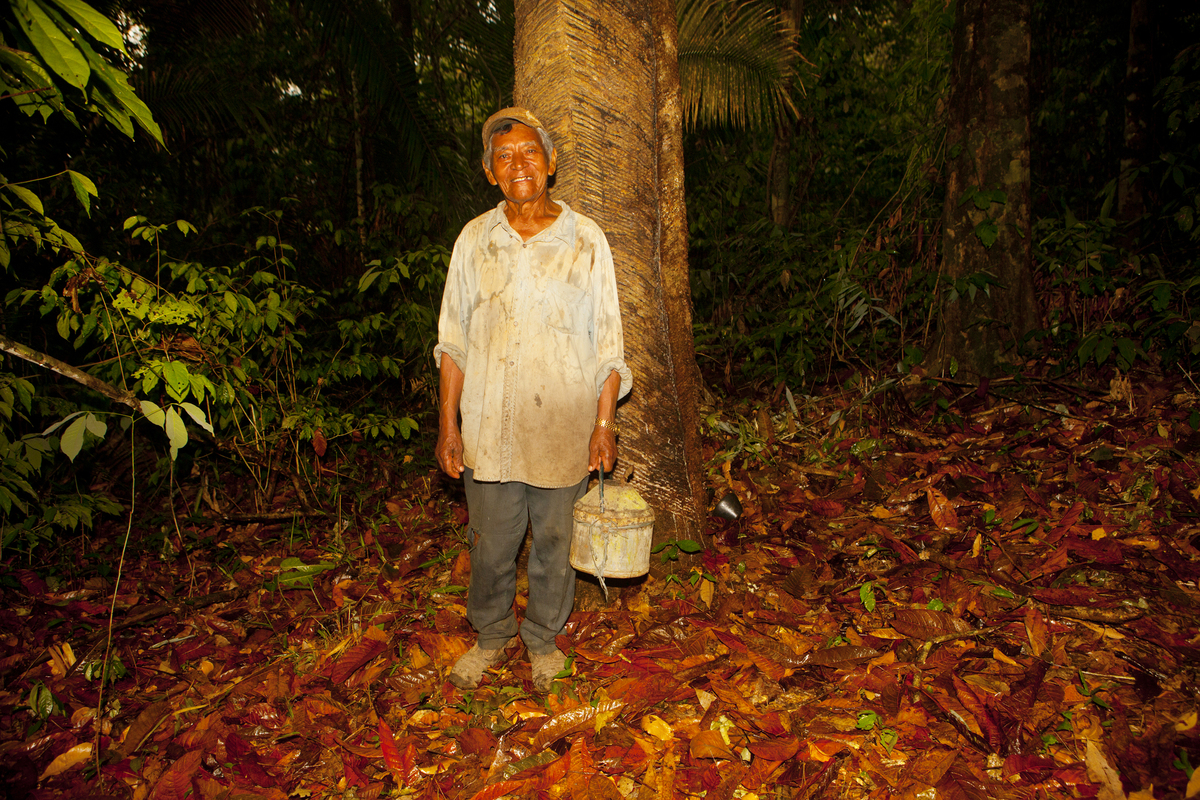 Back in the 19th century, Brazil's rubber trees were like gold — the only source of a precious commodity in a rapidly industrializing world. Brazil prospered on the back of them.

As da Silva recounts, a nefarious Englishman stole the seeds of the tree, and production moved to Asia, collapsing the industry in Brazil. Now, rubber tappers like him are granted the right to sustainably extract their livelihood from the forest. In return, they defend these protected areas from encroachment.

Tappers milk the trees for their sap by cutting into the bark and collecting the latex material in small metal buckets. In Brazil, rubber tappers are granted the right to sustainably extract their livelihood from forests like this protected reserve in Machadinho d'Oeste in the Brazilian state of Rondonia. Kainaz Amaria/NPR hide caption

The next day, the rubber tappers look very different.

We are heading into a part of the Amazon rain forest that the rubber tappers call enemy territory. We are the first journalists they've taken into this part of the forest.

Our guides include Elizeu Berçacola, one of the rubber-tapper leaders. He's 49 and has an intense, frenetic energy. He's got a pistol tucked into his belt and his great-grandfather's rifle from 1906. The other men also carry a motley assortment of weapons. 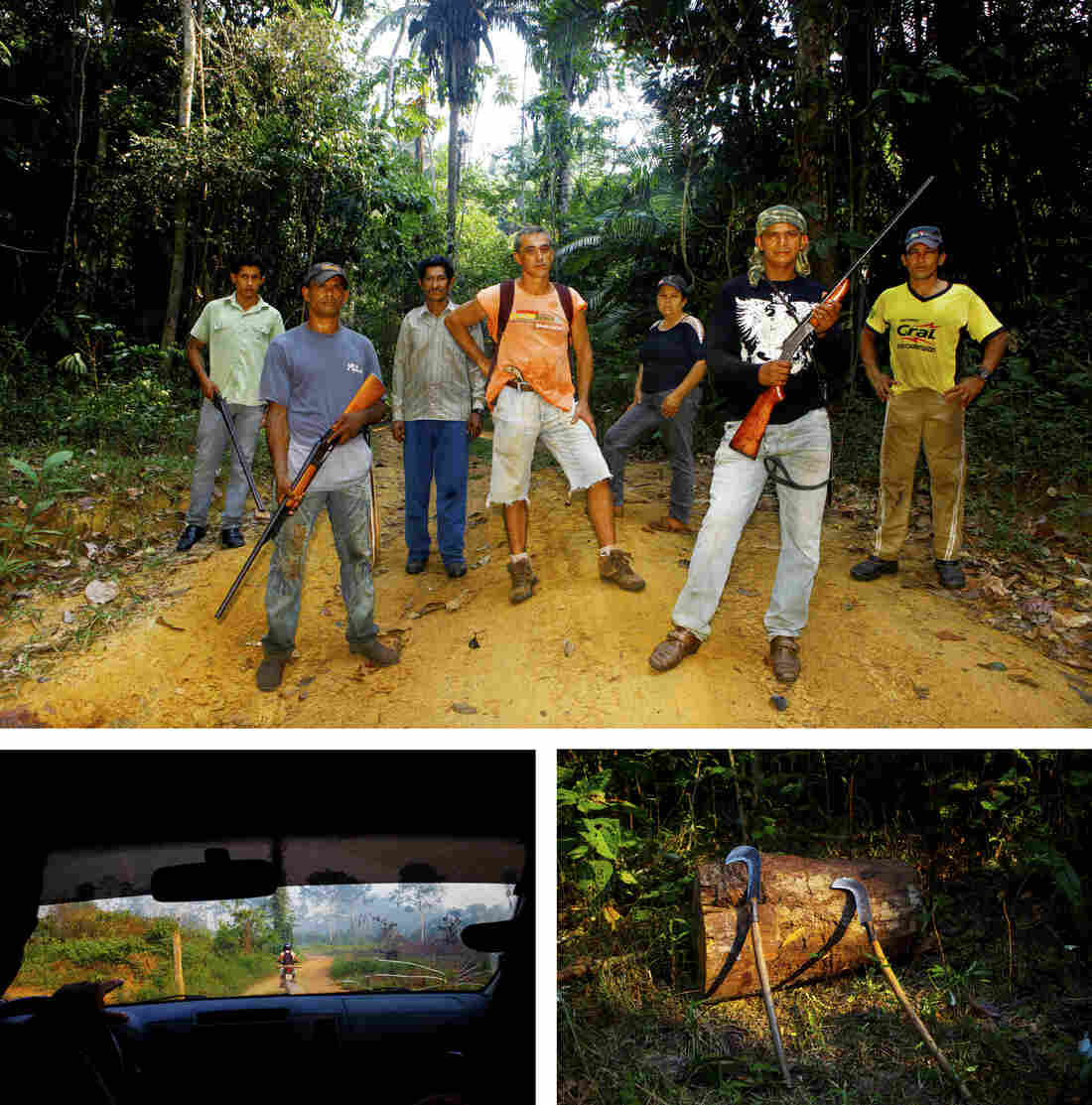 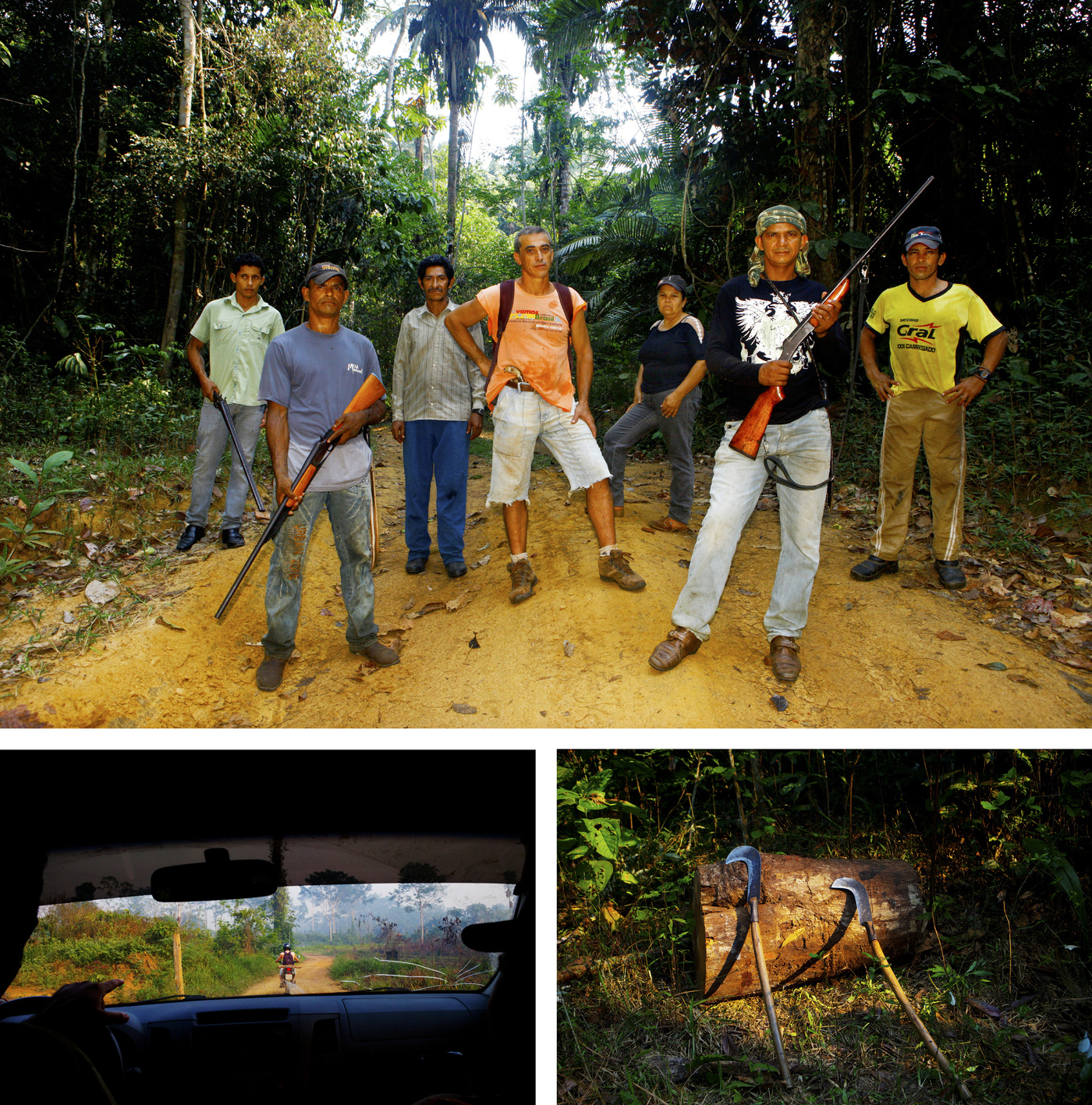 Giselda Pilker is the opposite — she's kind of the peace-loving mother of this group. Her son is named John Lennon, after the member of the Beatles.

The tappers — seven of them in all — signal to one another when it's OK to proceed. We are having to stop and start all the time to make sure we won't come into sudden contact with illegal loggers.

These are criminal gangs who steal protected wood from the forest. As we move deeper into the jungle, we see signs that they've been here, everywhere.

The rubber tappers are having to hack branches and fallen logs out of our way. 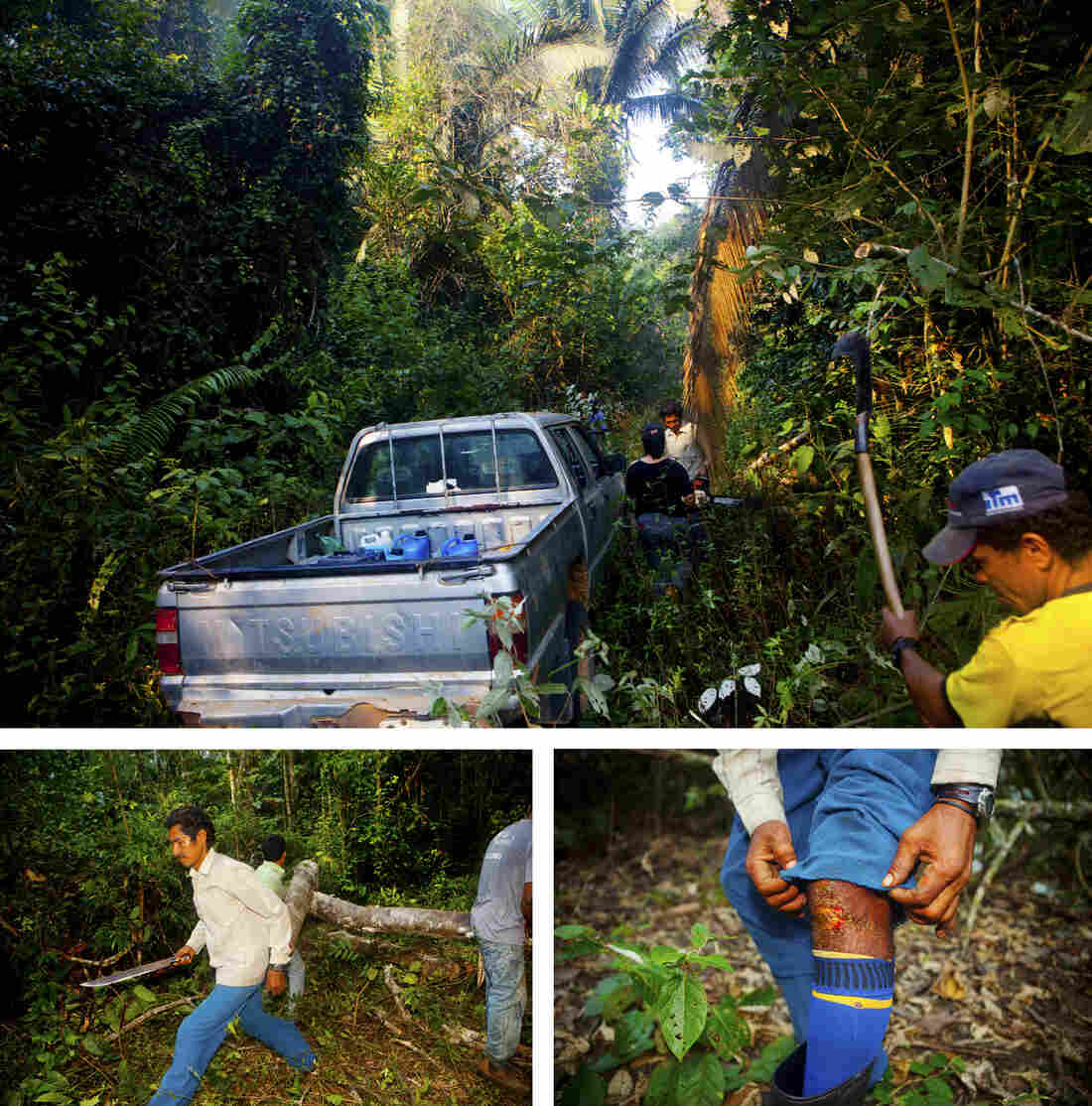 The rubber tappers point out some of the more valuable tree species — the ones that are older, therefore bigger, the hardwoods like mahogany or ipe, also known as Brazilian walnut.

Illegal loggers send teams into the forest to identify these trees, and then they come in stealthily later and cut them down.

This, Berçacola explains, is how illegal deforestation begins. The forest is thinned of its biodiversity, picked apart tree by tree. What's worse, the illegal logging gangs take the seed-bearing trees, what the rubber tappers call the "mothers of the forest."

What's driving this is demand. This wood is lucrative and sells for thousands of dollars internationally. America is the largest export market for Brazilian timber. 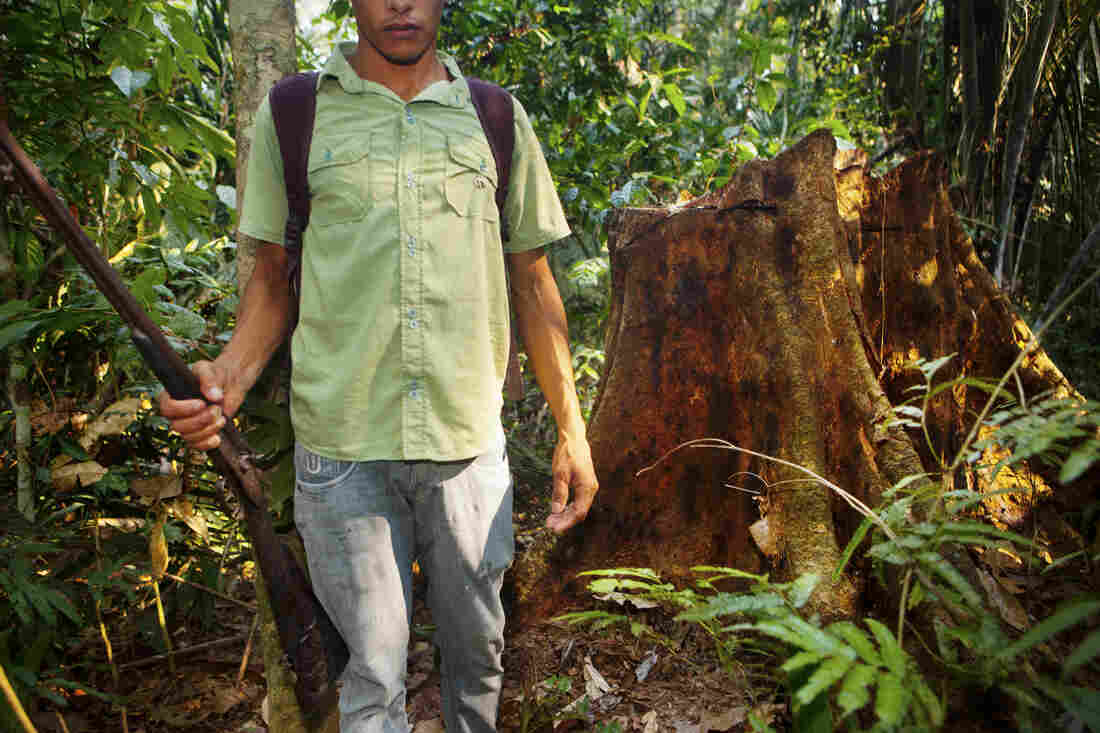 Rubber tapper Helenílson Felix stands near the stump of a tree that was felled by illegal logging. The tappers explained that this is how deforestation begins: The forest is thinned of its biodiversity, picked apart tree by tree. Kainaz Amaria/NPR hide caption 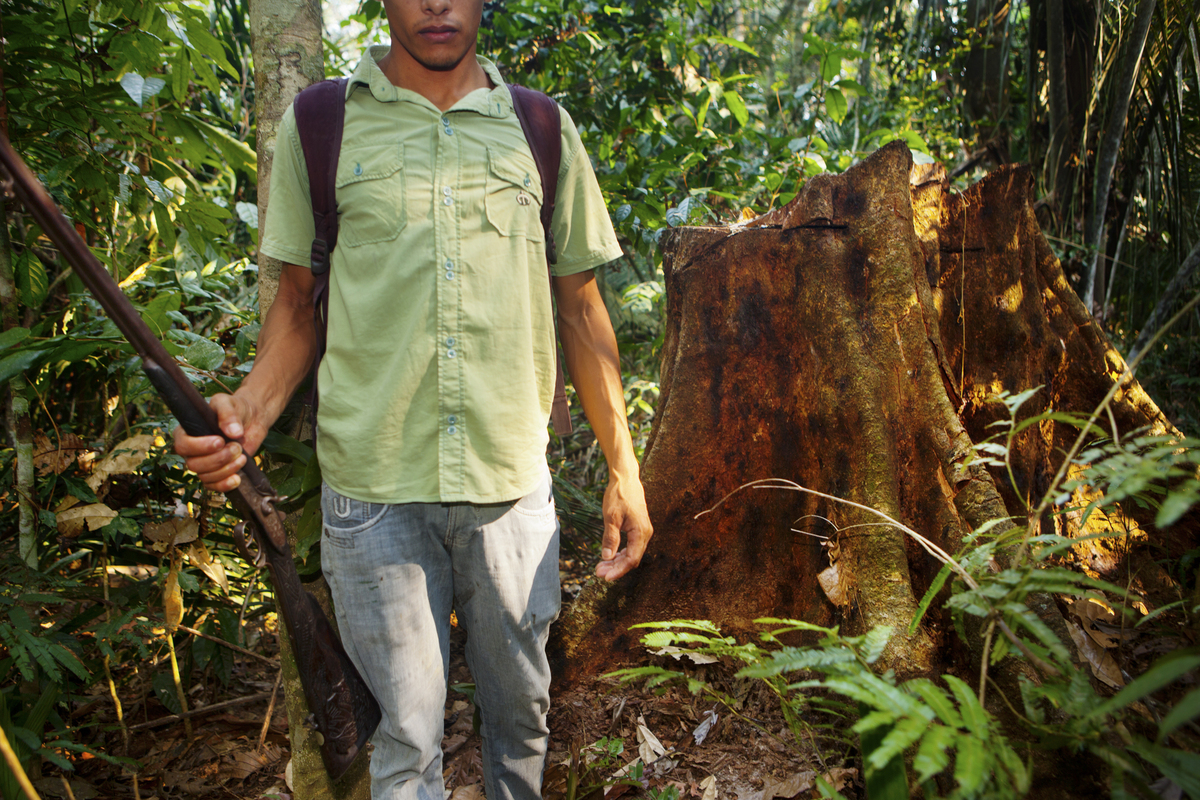 Rubber tapper Helenílson Felix stands near the stump of a tree that was felled by illegal logging. The tappers explained that this is how deforestation begins: The forest is thinned of its biodiversity, picked apart tree by tree.

The rubber tappers are trying to stop the illegal trade from happening, with patrols like the one we are on today. That's put them in direct conflict with what are essentially organized criminal groups.

As we move forward, Berçacola tells us — although we may not realize it — we are approaching the front lines.

"We rubber tappers are being hunted because we are trying to protect what you see around you," he tells me.

Sixteen rubber tappers in this area alone have been murdered in the past decade. One corpse was found stuffed into the burrow of a wild animal.

Berçacola is wearing a battered backpack that has three bullet holes in it. It's from a recent attempt on his life. His wife and children have left the state because of threats against them. 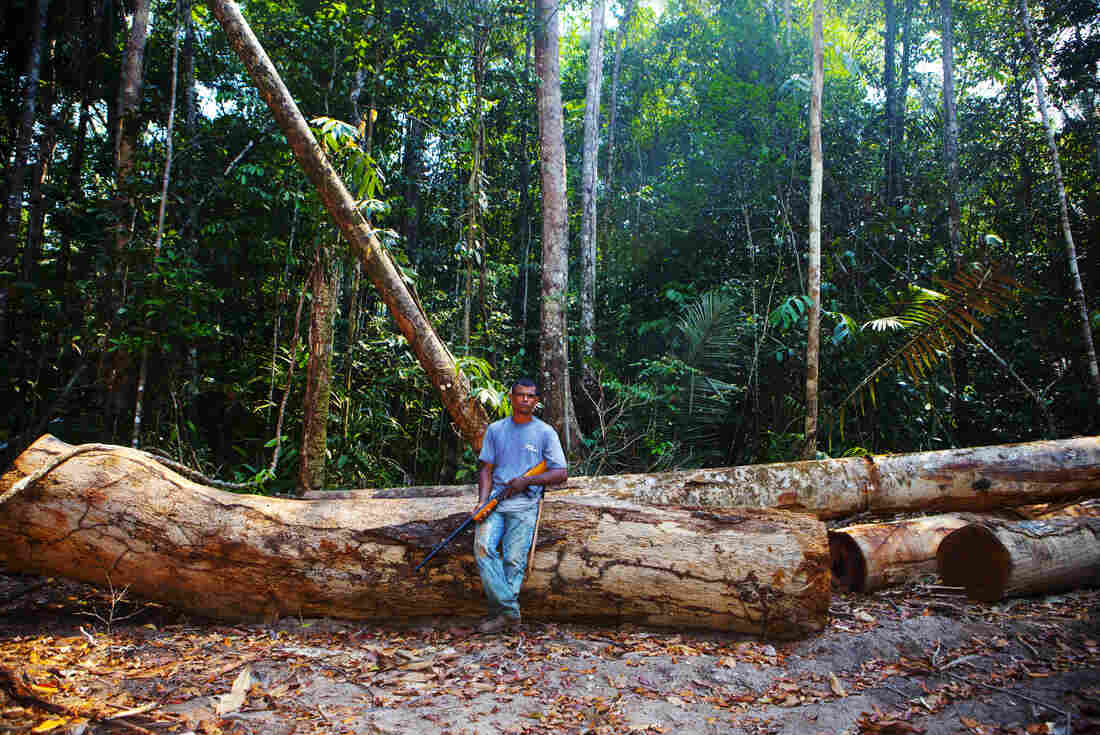 Edivaldo "Diva" de Souza, one of the tappers, stands in a clearing in the forest among trees that have been felled illegally. Kainaz Amaria/NPR hide caption

Giselda Pilker tells us how one rubber tapper was decapitated as a warning.

She says there isn't enough local law enforcement to protect the forest, so that's why they try to do it.

Technically, this kind of vigilantism is illegal, but the understaffed police turn a blind eye.

This area isn't the only one having armed conflicts. Indigenous groups have also been taking up arms in parts of the Amazon to fight for their ancestral lands.

We start moving again and we come across a wide dirt road that cuts through the green. The men tense up. They load their weapons in case of a confrontation.

Berçacola tells me what we've found is an illegal logging road — but unlike the other track we were on, this one is wide and smooth, an example of how well-used it is and how the illegal loggers operate with impunity. Berçacola tells us there are at least nine of these roads in this area alone. 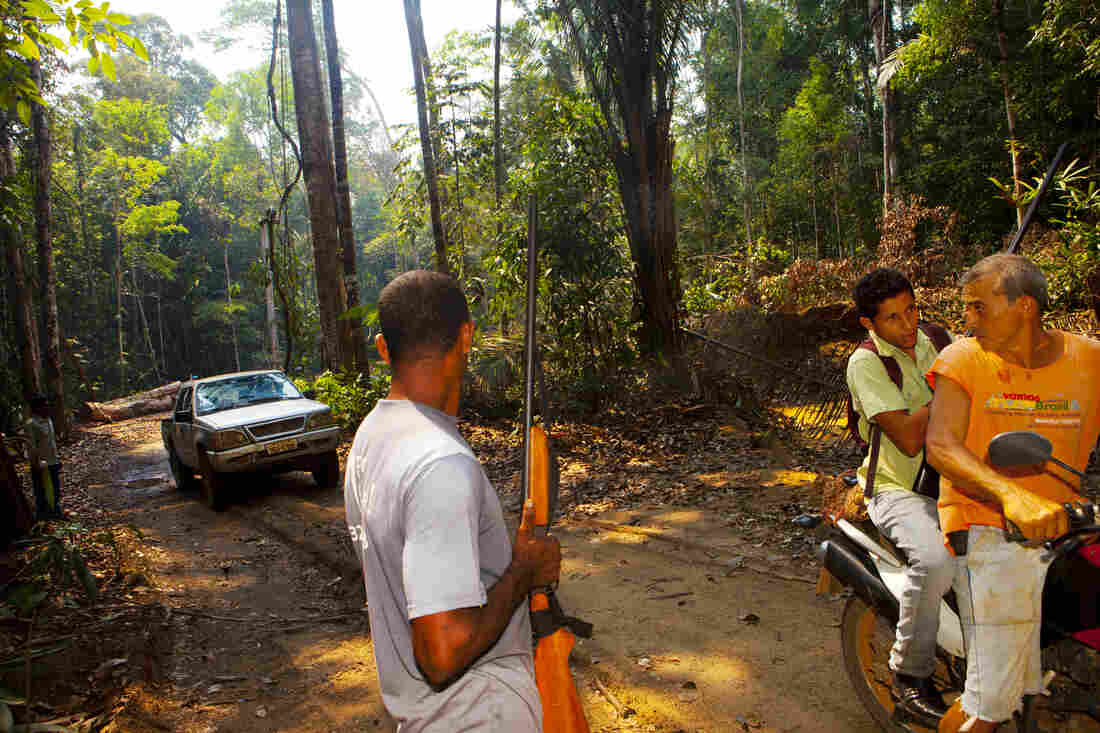 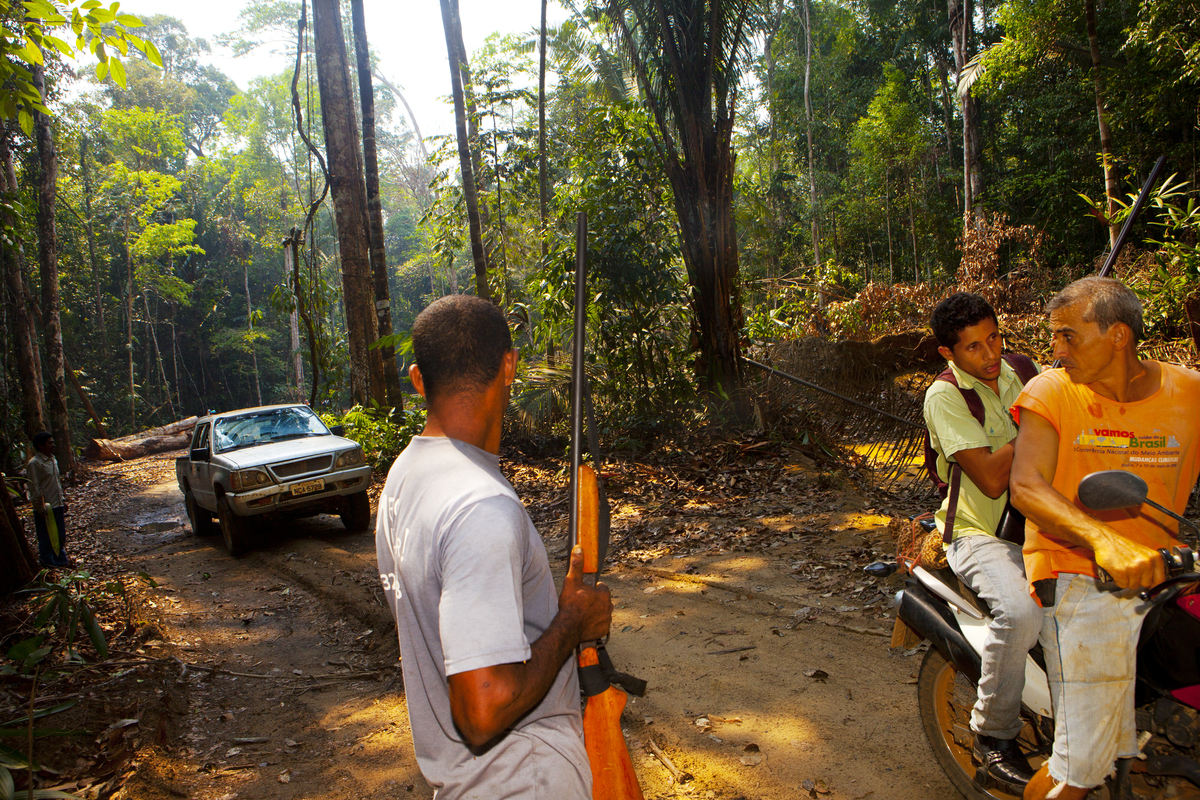 This is illegal deforestation's ground zero.

We see piles of stacked logs that have been illegally cut, waiting to be taken out of the forest.

We creep up on foot toward a clearing. We are whispering to one another because we are not sure what we will find.

In just this one tiny part of one forest reserve in the Amazon, we discover three illegal logging camps. They don't look like much, but they can house teams of men that strip the forest down. 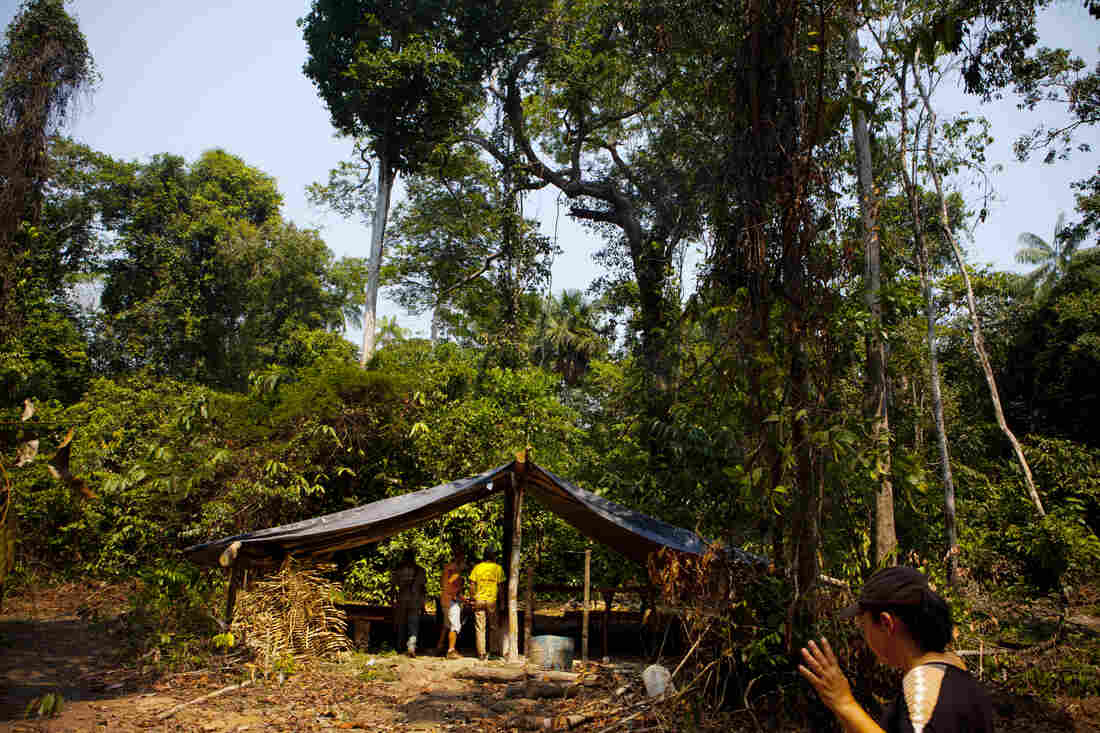 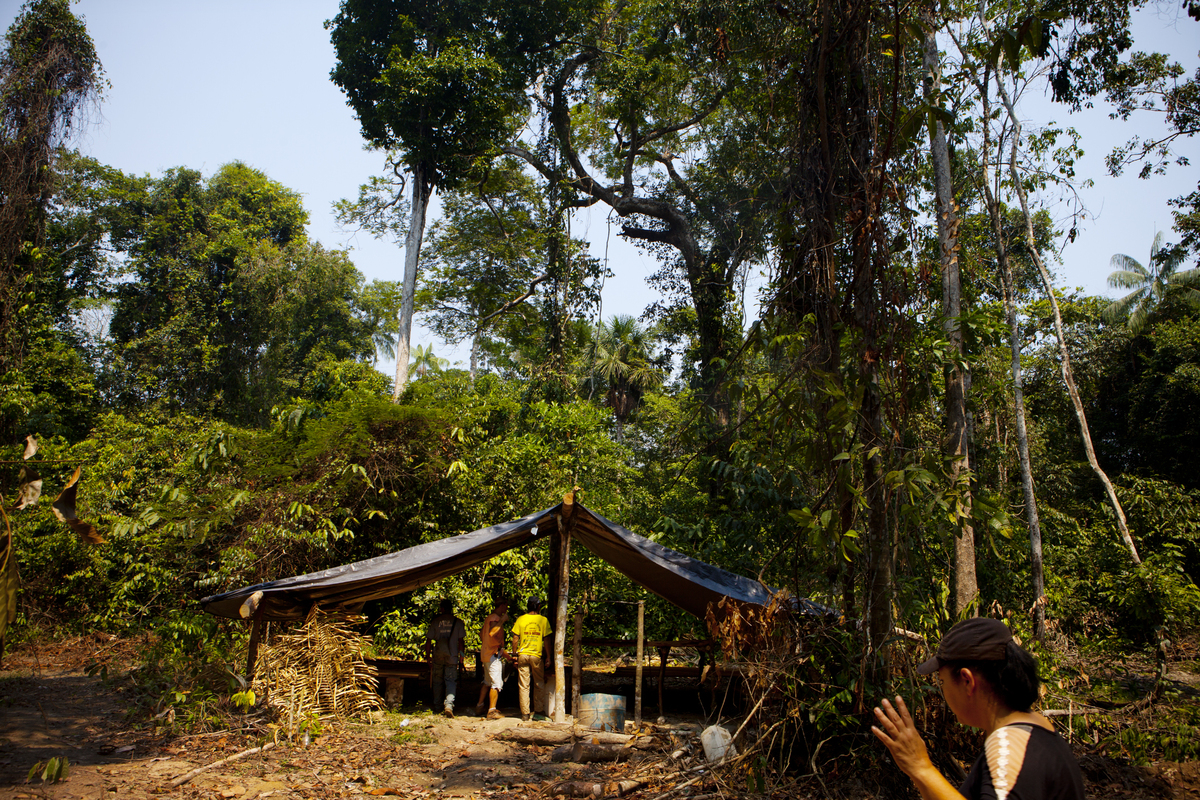 Most of the people who do the dirty work of illegal logging are actually the poorest of the poor. It's practically slave labor, backed up by shadowy gangs. The workers sleep out in the elements, and they are paid very little.

As we walk around one camp, we realize it's only been recently vacated. There are a few suitcases. We open them up, and inside we find very meager belongings: a couple of pairs of shorts, some toothpaste, a notebook and a few well-thumbed pornographic magazines.

Berçacola and his crew then set fire to the camps, to make sure they can't be used again. 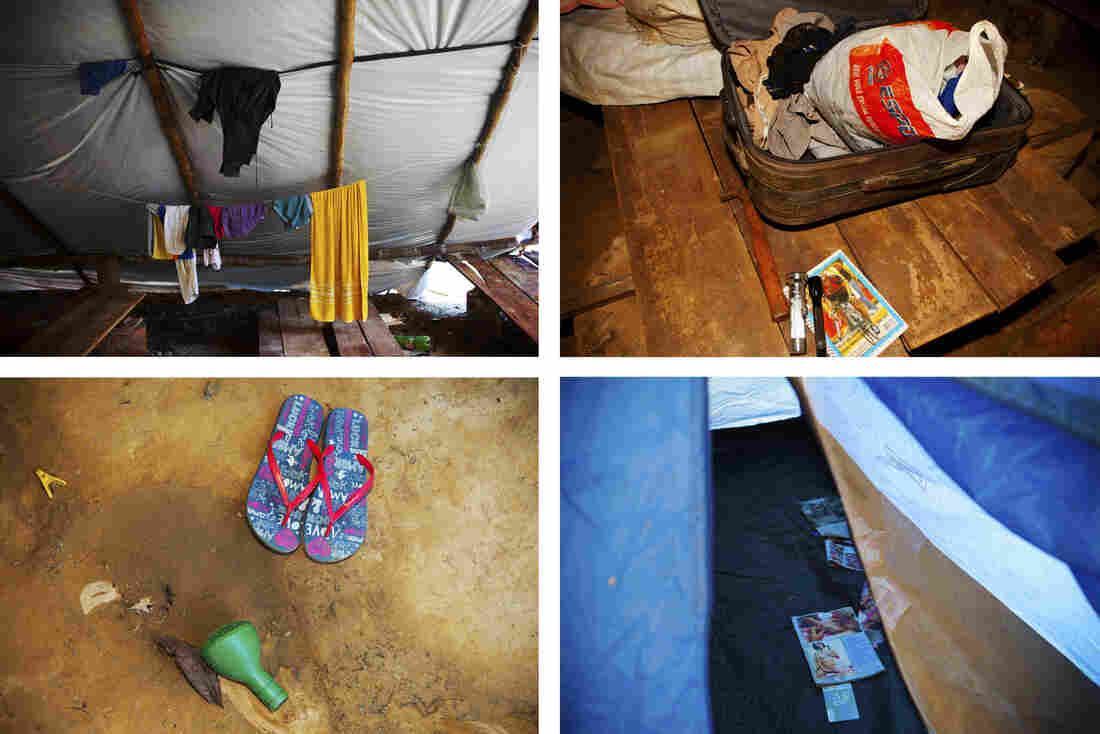 As the camps burn, we suddenly realize we are not alone.

Pilker shouts out that she has spotted a motorbike coming toward us. We've been warned that the illegal loggers have scouts watching their camps.

The rubber tappers are startled, but they charge after the biker. They kneel down and take aim and fire. The crack of gunfire breaks the heavy silence of the jungle. 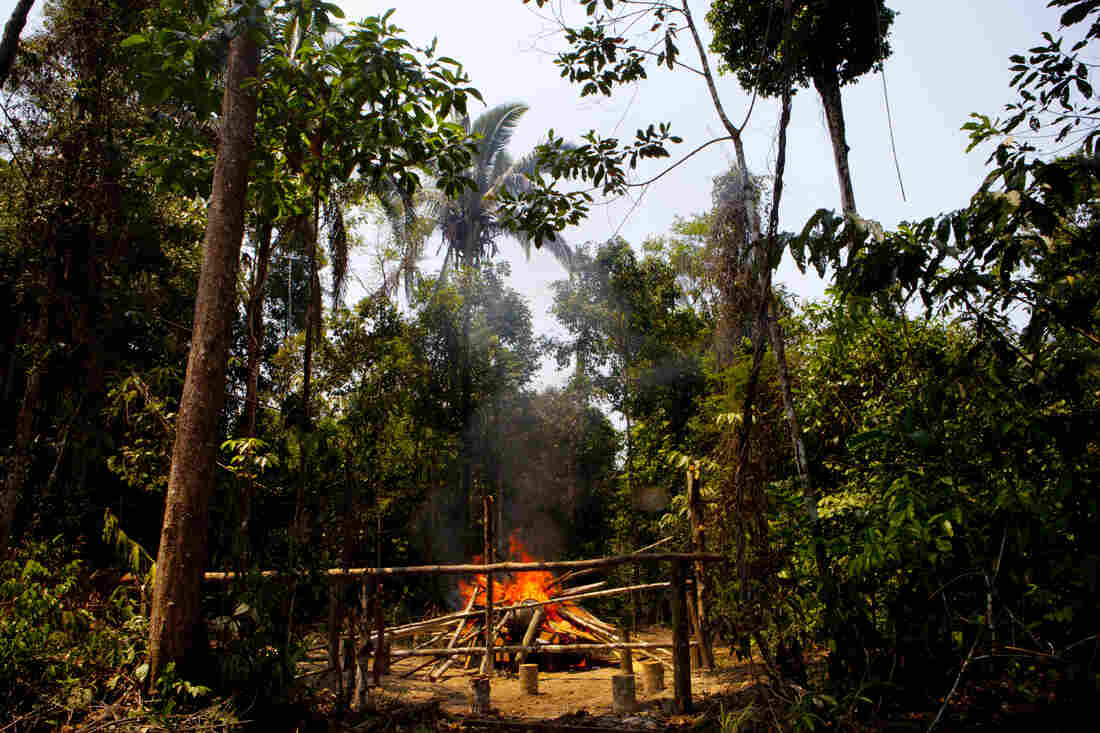 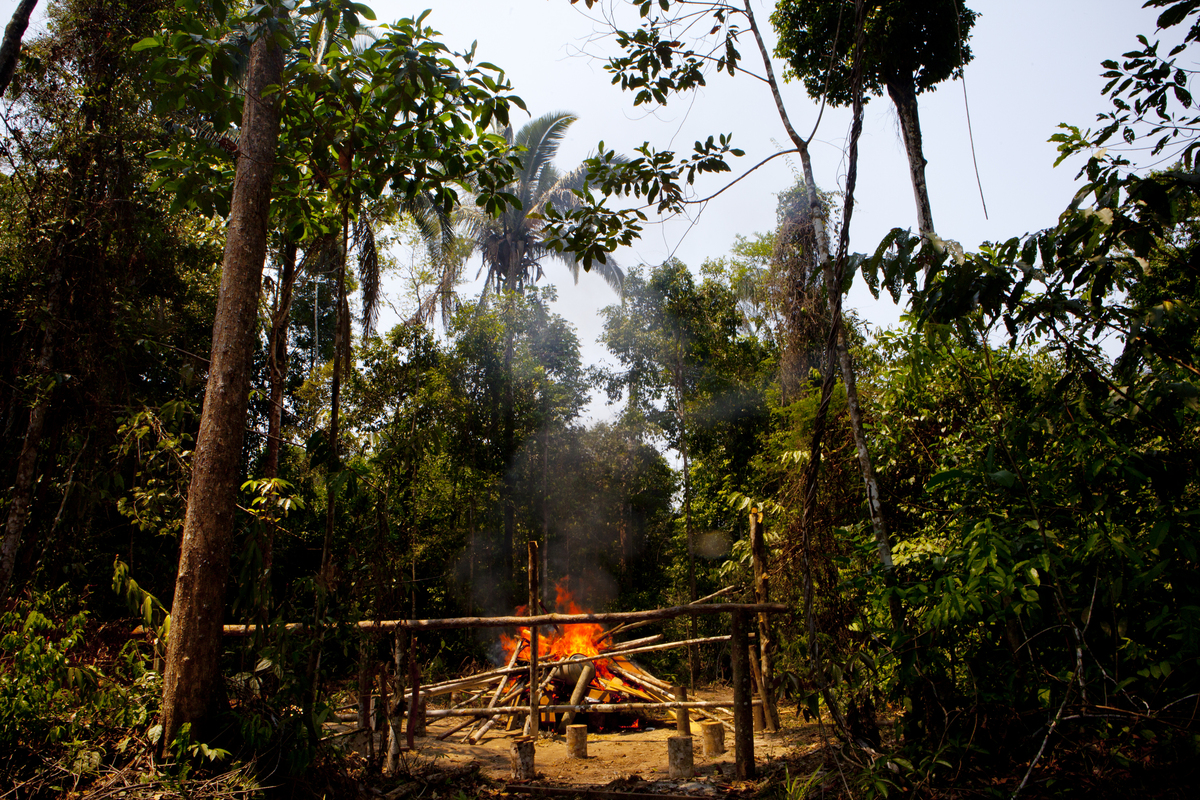 Luckily, it ends up being just the one scout on a motorcycle, and the tappers chase him off. Berçacola is pumped up and triumphant.

He explains it's been a good day and the group wants to continue their patrol. They say they are thrilled that they have managed to chase off people who are doing damage to the trees.

The euphoria, though, is fleeting. 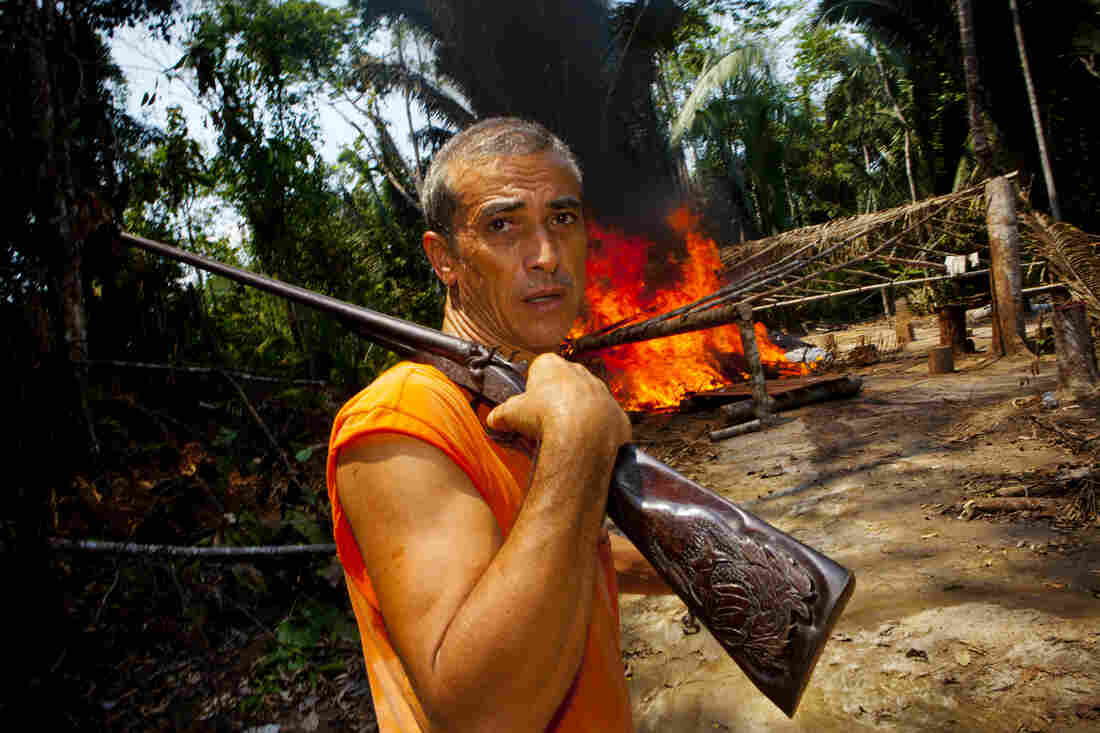 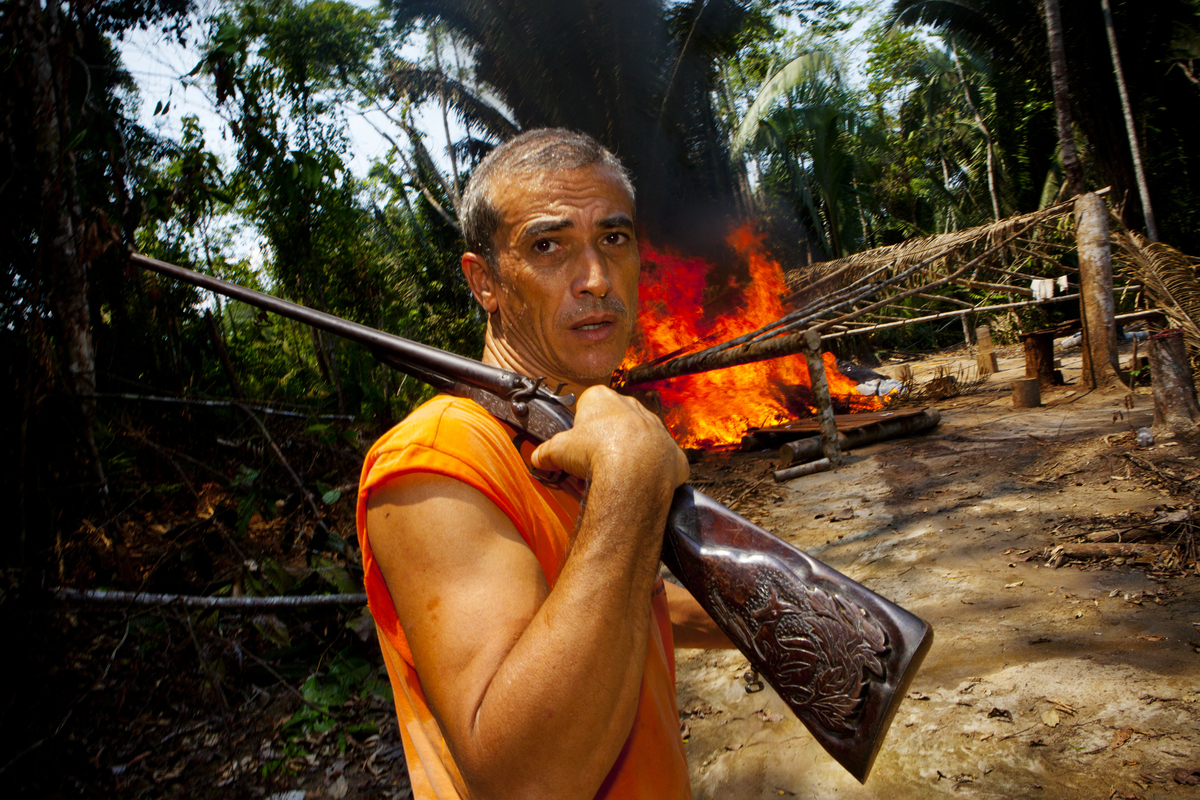 Elizeu Berçacola surveys the scene after he and his fellow rubber tappers set afire one of three illegal logging camps.

While we are standing next to an illegally chopped down tree that's the color of blood, I ask Pilker, the rubber-tapper leader, what the future of the rain forest is. Her whole family lives off forest reserves like these.

She breaks down sobbing, tears tracking down her face like rain.

"We struggle so much to defend the land, we fight so hard," she tells me. "We die, so many have died to defend what you see here."

She says, simply, they are losing the fight.

"To cut down a tree is like cutting out a piece of us. No one does anything to save us," she says. "We people of the forest are peaceful. We don't want this war."