Accessibility links
There's A 'Jeb Can Fix It' Website. Jeb Bush Doesn't Own It Jimmy Flannigan ran for city council in Austin in 2014, with the slogan "Flannigan Can Fix It." When he heard about Jeb Bush's new campaign slogan, he got mad.

There's A 'Jeb Can Fix It' Website. Jeb Bush Doesn't Own It

There's A 'Jeb Can Fix It' Website. Jeb Bush Doesn't Own It

Jeb Bush's presidential campaign is attempting a reset of sorts. Lackluster debate performances, low poll numbers, a mounting number of gaffes on the trail, and accusations — from Donald Trump specifically — that he's low-energy have left him in a rut.

Late last week, Bush introduced a new campaign slogan: "Jeb Can Fix It." He has started using it in stump speeches and in visuals at his campaign appearances. But there's one thing Bush and his team forgot as they rolled out the slogan: No one from his team bought the domain name.

NPR caught up with Jimmy Flannigan, a self-described community organizer, activist and Web developer in Northwest Austin. Flannigan adopted the campaign slogan "Flannigan Can Fix It" during his 2014 Austin City Council run. And when he heard of Bush's new slogan, he felt his idea had been stolen, in a way. So he got even. He bought jebcanfixit.com.

The site leads with the Jeb 2016 logo, but instead of an exclamation point after the name, there's a question mark. Below, this question: "Is Jeb running for President or City Council?" Below that, Flannigan embedded one of his campaign videos: a six-minute, single-shot opus, with Flannigan rescuing cats from trees, pouring old women wine and changing a baby's diaper — all while telling viewers why he deserves their vote.

NPR spoke with Flannigan about jebcanfixit.com. Highlights of the conversation are below.

(Note: Questions and answers have been lightly edited for clarity.) 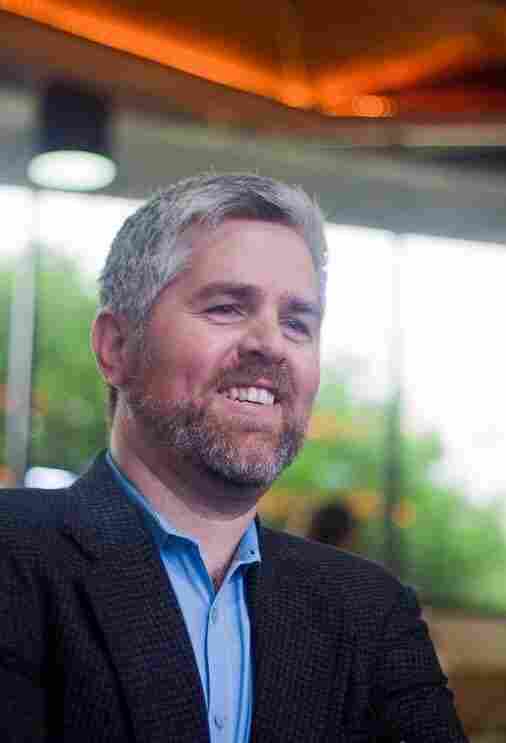 Well, I first heard that Jeb was intending to launch this slogan last week. It started to leak out through the media. And since I'm a Web developer by trade, my first instinct is to always check the domain name, and he hadn't purchased it. I bought it immediately, knowing what I was going to do.

Since it was so similar to my city council race slogan, I knew that I would have to poke fun at the governor for stealing my slogan for a presidential race, when it's way more appropriate for a race at the city council level than it is for president.

This slogan you mean?

Why is this slogan more appropriate for a city council race than a race for president?

(Note: Flannigan admitted elsewhere in our conversation that it's highly unlikely Bush actually got the idea for his slogan from Flannigan's council run. He says his use of the word "stealing" is more symbolic.)

So, talk us through this video. How did you think of it? How did you make it happen? How long did it take? How much money did it cost.

I wanted to have a slogan that addressed some of the particulars of that city council race. My opponent didn't have any experience with city issues. So I wanted to talk to the specifics of who my opponents were, and the needs of my constituents. So we developed the phrase "Flannigan Can Fix It," which makes way more sense with the name Flannigan than it does with Jeb, frankly. I workshopped it with a friend of mine who does local TV and film work. And the video was one component of it. In the video you see all the hammer graphics. We went back and put the hammers on all of our road signs and yard signs and started integrating that, frankly, not unlike what Jeb Bush is doing, rolling the slogan out halfway through. Except when we were doing it, we weren't trailing in the polls.

It's a single shot, tracking video. Some of my friends like to liken it to the West Wing, when he's walking through the hallways and the camera never breaks. And the intent, really, the video starts with me in a classic video shot. I'm sitting on a city street, and there's single-family homes behind me. And then I jump up, and I start taking off, and I'm walking through the house, and I'm jumping on a golf cart, and talking to the camera the entire time, and fixing things as I go along. And it starts out kind of simple, and it starts to get crazier and crazier as you get to the end of the video. 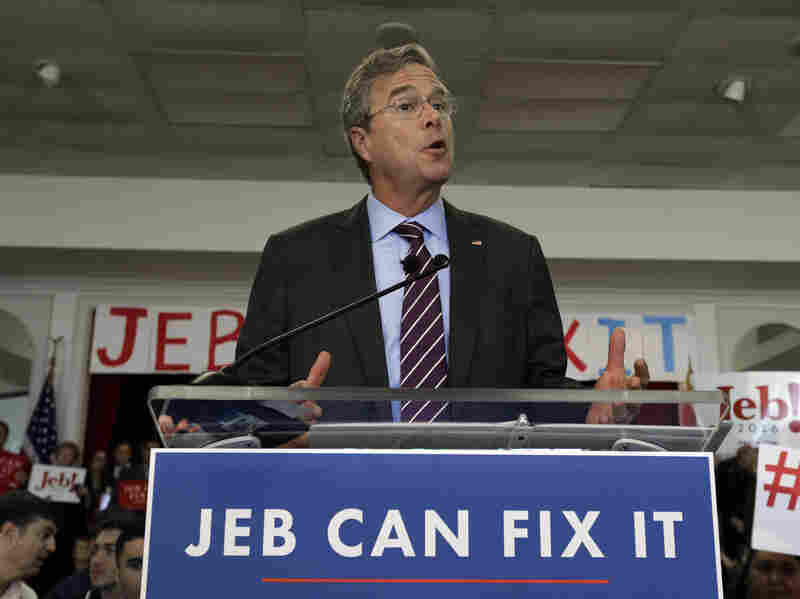 Republican presidential hopeful Jeb Bush speaks during a rally Monday in Tampa, Fla. He owns his new slogan, but jebcanfixit.com belongs to someone else. Chris O'Meara/AP hide caption 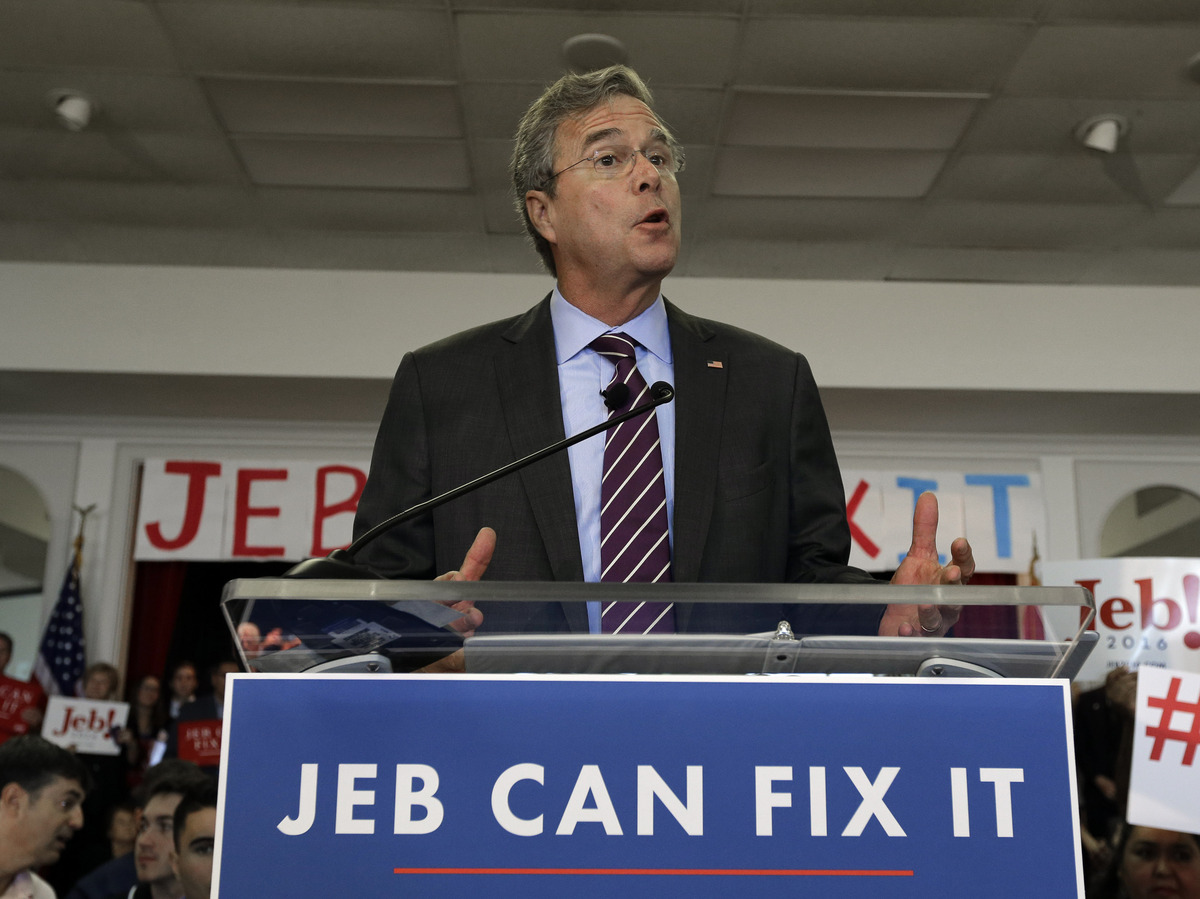 Republican presidential hopeful Jeb Bush speaks during a rally Monday in Tampa, Fla. He owns his new slogan, but jebcanfixit.com belongs to someone else.

How long did it take to shoot that video?

It took two weeks of rehearsal with me and my two assistants and the video and the audio crew. And then the actual filming was done in one afternoon. We did three takes, and ended up using the second one.

You did not win your election.

So did the video work?

It absolutely accomplished the goals that I had set out.

What would a better slogan for his [Jeb Bush's] campaign be? And what advice would you give him right now?

There's no way on earth someone who ran for city council and lost is going to give advice to a presidential campaign. My whole point of doing the "Jeb Can Fix It" website is to poke fun at the fact that Jeb Bush is using the techniques more appropriate to a city council race than one running for president.

What if Jeb Bush came to you and was like, "Hey, man, 10 grand, 20 grand, name your price: I wanna buy this website from you." What would you say?

Absolutely. In a heartbeat. That money would go a way to doing some great grass-roots organizing in Northwest Austin. It's not about being mean. I think the whole thing is absolutely hilarious. And if we all took that tone in our politics, then I think it would be a lot more enjoyable, and maybe a few more people would vote.

Note: There's also a jebcanfixit.org, which does not seem to be owned or sponsored by Bush's presidential campaign, either.