Accessibility links
Voters Rebuke Democrats At Polls In Another Blow To Obama A Republican will be governor of Kentucky for only the second time in 40 years. Democrats blamed "Trump-mania." Conservatives helped block pot legalization in Ohio and repealed an LGBT law in Houston.

Voters Rebuke Democrats At Polls In Another Blow To Obama

Voters Rebuke Democrats At Polls In Another Blow To Obama 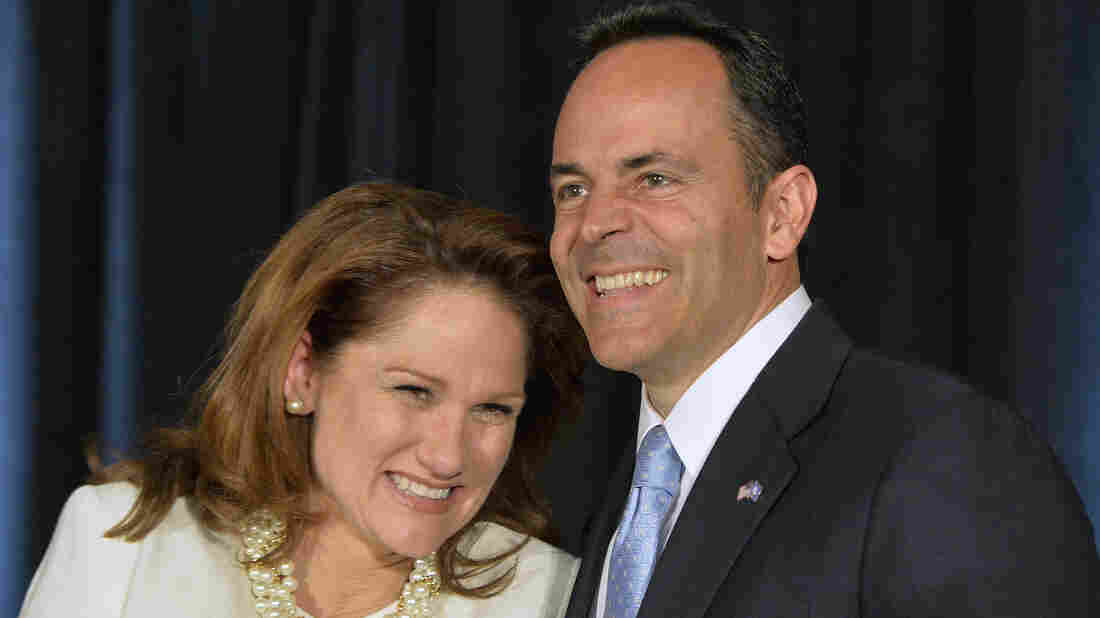 Kentucky Gov.-elect Matt Bevin and his wife, Glenna, react to the cheers of supporters during his introduction at the Republican Party victory celebration Tuesday. Timothy D. Easley/AP hide caption 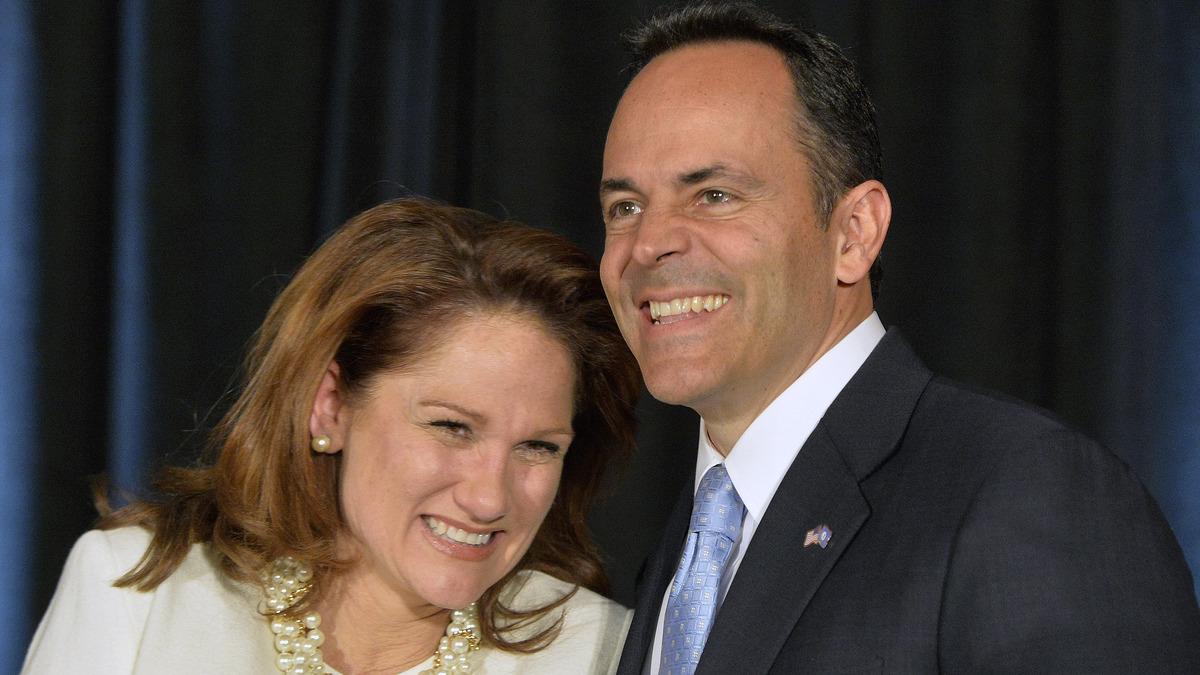 Kentucky Gov.-elect Matt Bevin and his wife, Glenna, react to the cheers of supporters during his introduction at the Republican Party victory celebration Tuesday.

Conservatives across the country issued a stinging rebuke to President Obama and the Democratic Party on Tuesday night.

In Kentucky, Republicans notched huge wins for governor and other statewide offices. In a race most believed leaned slightly to the Democrats, Tea Party favorite Matt Bevin pulled off the surprise easy victory despite several missteps. His win gives the Bluegrass State only its second Republican governor in the past 40 years.

But the blowback didn't stop there. In Houston, voters repealed a law to protect gay, lesbian and transgender people from discrimination with the slogan — "No men in women's bathrooms." In Ohio, they rejected a referendum to legalize marijuana in the state. And in Virginia, despite millions of dollars in ads pushing gun-control measures, Democrats still failed to take back the state Senate.

The results cap off yet another disappointing election cycle for Democrats since President Obama entered the White House. While they've managed to construct a strong coalition in presidential years, it's conservatives who have been more motivated to turn out to the polls during both midterm and off-year elections. Since 2010, Democrats have lost control of both the House and Senate. A dozen governorships have turned from blue to red, along with many state legislative chambers.

The troubling sign for Democrats is that Tuesday's rebuke didn't simply come from the South — it was against liberal policies in more Democratic-friendly areas like Ohio and Houston.

Here's a rundown of what happened on election night.

The victory of Bevin — a man despised just a year ago by the GOP establishment in the state after he tried to unseat Senate Majority Leader Mitch McConnell in the primary — shows Democrats' grip on their last remaining stronghold in the South has disappeared.

Democrats had still managed to cling to the Bluegrass State, and polls even showed that Attorney General Jack Conway had the edge going into Election Day. He had hoped to ride the coattails of popular term-limited Democratic Gov. Steve Beshear and the state's successful Obamacare exchange "Kynect" to victory. 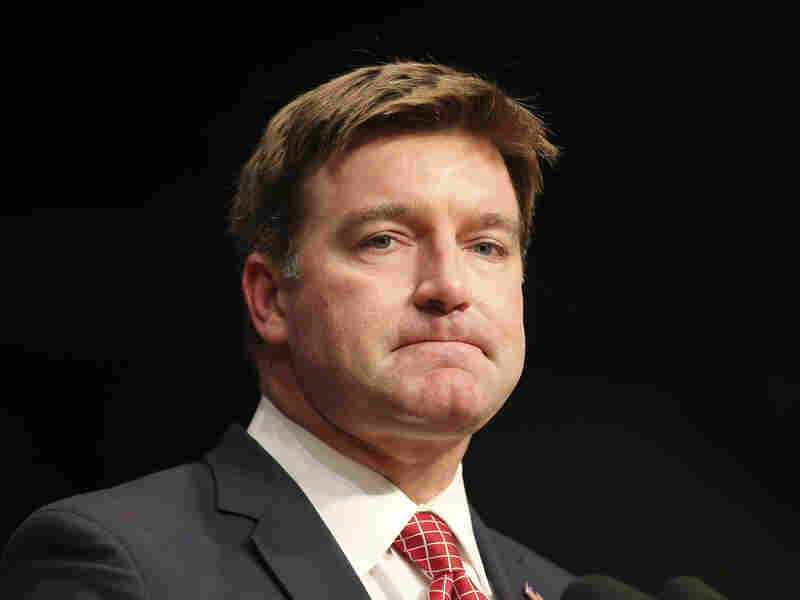 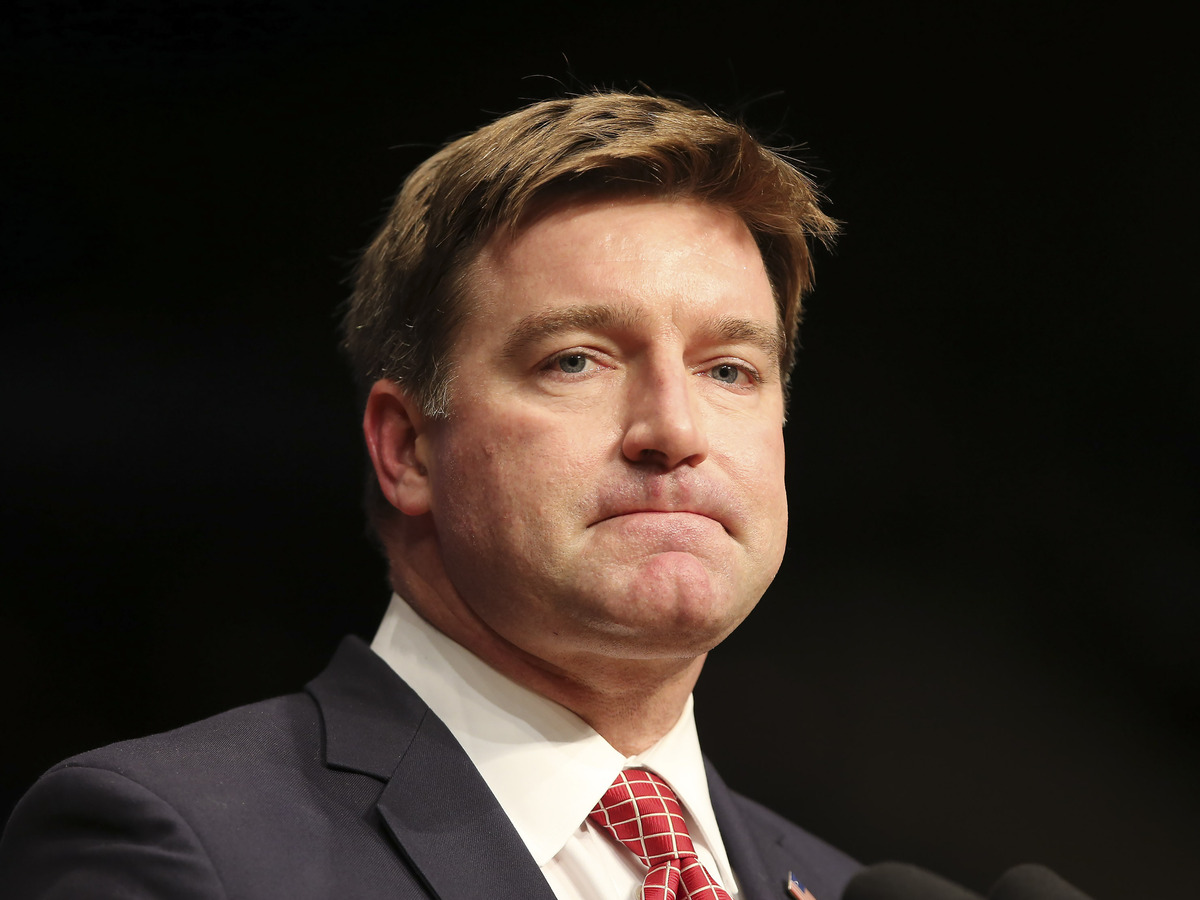 Democratic gubernatorial candidate Jack Conway thanks his supporters during a concession speech at the Kentucky Democratic Party election night watch party at the Frankfort Convention Center on Tuesday.

But the anti-Obama tide proved to be too much. The Republican Governors Association spent $2.5 million in the final weeks, mostly on ads and mailers tying Conway to Obama. Though local Democrats hoped voters would be able to differentiate state races from national ones, in Kentucky on Tuesday they did not.

The victory came despite poor reviews for Bevin on the trail and Democrats' arguments that he was too far right for the state. Democrats tried to spin the venture capitalist's win, somewhat bizarrely arguing that Conway "ran into the unexpected headwinds of Trump-mania, losing to an outsider candidate in the Year of the Outsider."

The loss had other reverberations, too — state Auditor Adam Edelen, who was seen as a possible challenger to Sen. Rand Paul next year — lost his re-election bid.

Bevin's win also puts the future of Kynect, the state's successful health care exchange, up in the air. As NBC's Perry Bacon noted, Bevin has said he would get rid of the exchange program, which could leave thousands without insurance coverage, but he has softened his stance on allowing Medicare expansion in the state.

Social conservatives were successful in repealing an anti-LGBT discrimination bill with a simple slogan: "No Men In Women's Bathrooms."

The bill extended to far more than which bathroom transgender people could use, also protecting them from employment discrimination and housing bias, among other civil rights protections, and is similar to many other measures across the country.

The bill's rejection is a blow to Mayor Annise Parker, who became the first openly gay mayor of a major city when she won in 2009. Parker rallied celebrities and corporations to her side, like Apple and actress Sally Field.

But opponents, who branded it the "bathroom bill," framed their argument as one of child safety and said it would enable sexual predators. With the backing of the faith community, Texas Gov. Greg Abbott and even a former Houston Astros star, the groups opposing it ran an effective campaign with persuasive ads like this one:

The law's repeal could have other reverberations — the Super Bowl is scheduled to be in Houston in 2017. "I don't think it's the straw that creates the imbalance where you don't get a Super Bowl or lose a Super Bowl, but it's definitely part of the equation when people make decisions," Ric Campo, who is chairing the city's Super Bowl host committee, told The New York Times.

To that, Lt. Gov. Dan Patrick, who is against the law, said, per the Times, "If Roger Goodell, the NFL commissioner, 'would even suggest that the Super Bowl not be played here because we don't want men in ladies' bathrooms, then we need a new commissioner.'" 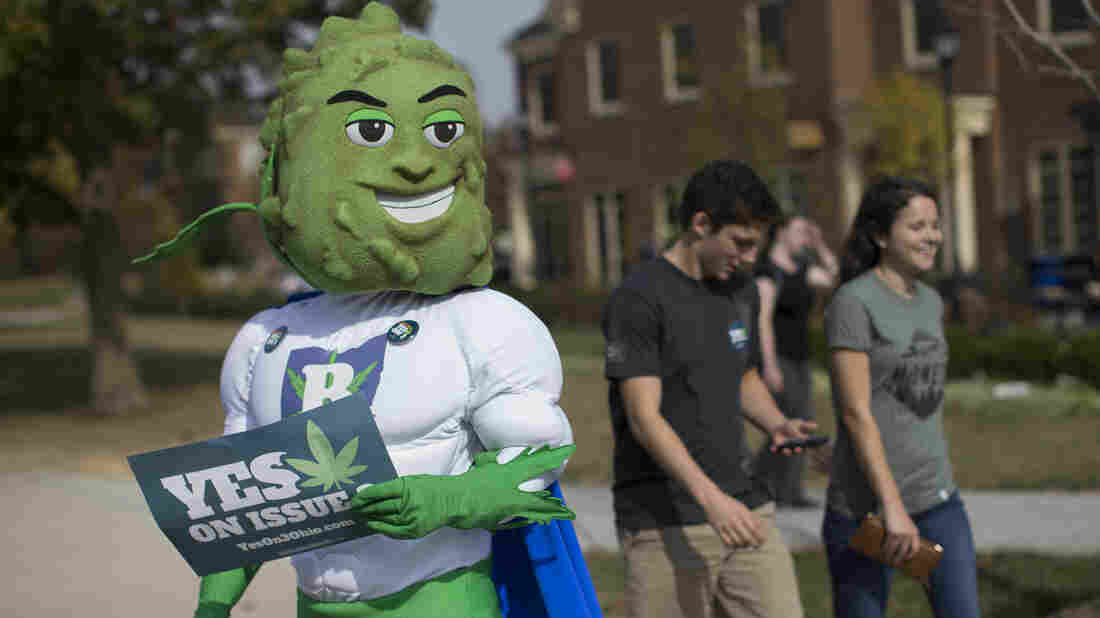 Buddie, the mascot for the pro-marijuana legalization group ResponsibleOhio, waits on a sidewalk to greet passing college students during a promotional tour at Miami University of Ohio last month. John Minchillo/AP hide caption 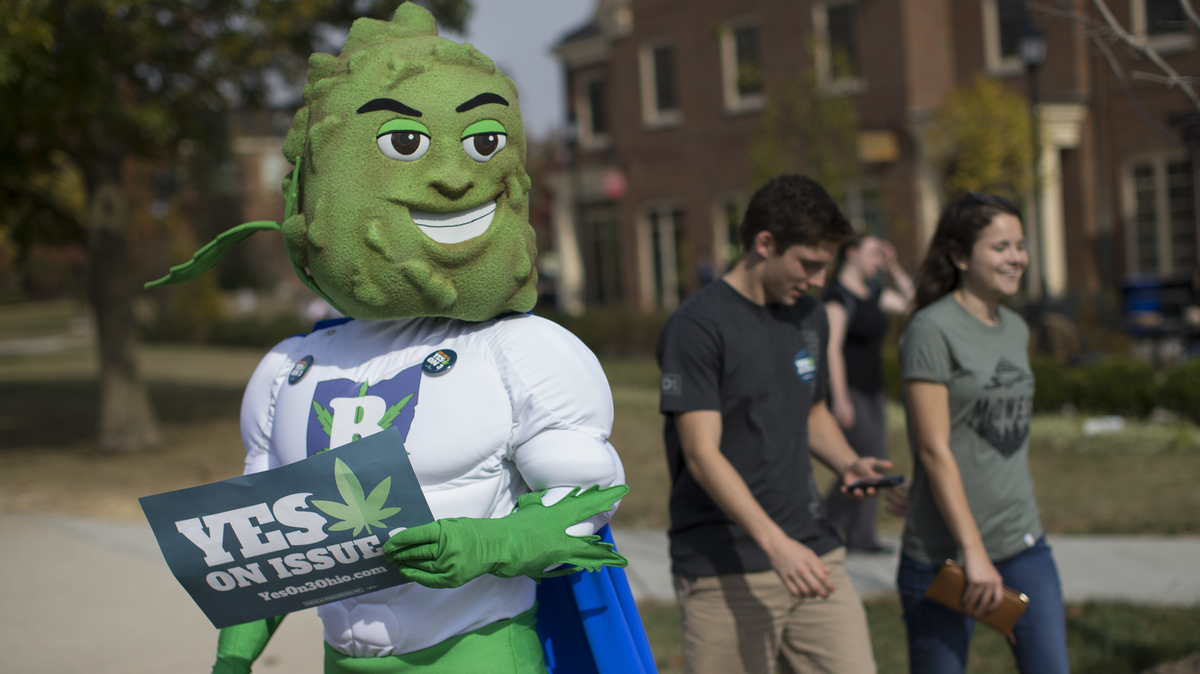 Buddie, the mascot for the pro-marijuana legalization group ResponsibleOhio, waits on a sidewalk to greet passing college students during a promotional tour at Miami University of Ohio last month.

A statewide referendum to legalize recreational and medical marijuana overwhelmingly failed in Ohio. Advocates had launched a $20 million campaign in favor of its passage, including the creation of "Buddie" the marijuana mascot. The subsequent marijuana farms the measure would have produced would have been big windfalls for its backers, including former 98 Degrees frontman Nick Lachey.

Opponents, however, successfully framed it as a danger to families and children. "At a time when too many families are being torn apart by drug abuse, Ohioans said no to easy access to drugs and instead chose a path that helps strengthen our families and communities," Republican Gov. John Kasich, a presidential candidate, said in a statement.

Democratic Gov. Terry McAuliffe's push to turn the state Senate blue was dashed Tuesday, despite crisscrossing the commonwealth for nearly the past month and a heavy push from outside groups over gun control. Instead, Republicans' slim one-vote advantage held in the upper chamber.

Former New York City Mayor Michael Bloomberg's gun-control group put $2.3 million into the state, running ads hitting two Republican candidates over the issue just weeks after two reporters had been gunned down on live TV at a Roanoke, Va., station. The National Rifle Association and other groups pushed back with their own ads.

It's a blow to the progressive agenda McAuliffe, who was elected in 2013, wants to push through on education, Medicaid expansion and more. But it also would have helped his push to deliver the critical swing state for his longtime friend and close ally Hillary Clinton in the 2016 presidential race, if she emerges as the nominee.