Accessibility links
'Spectre' Pleads The Case For Bond's Relevance In The Drone Age Playing James Bond for the fourth time, Daniel Craig loses much of the vulnerability and dimension he once gave the character, while director Sam Mendes provides too much metacommentary on 007.

'Spectre' Pleads The Case For Bond's Relevance In The Drone Age

'Spectre' Pleads The Case For Bond's Relevance In The Drone Age 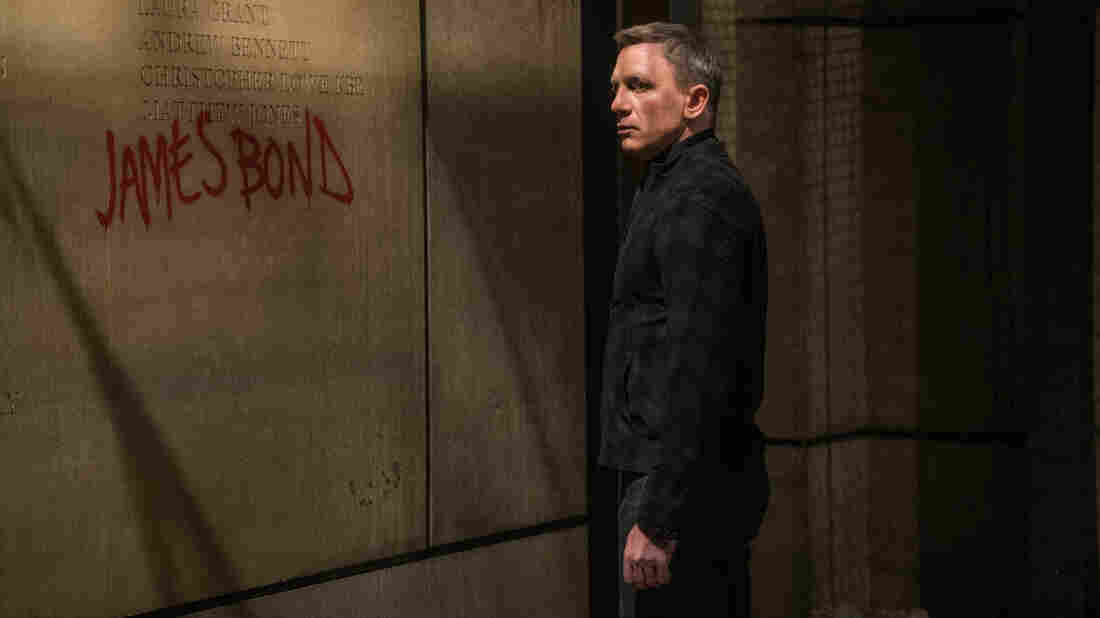 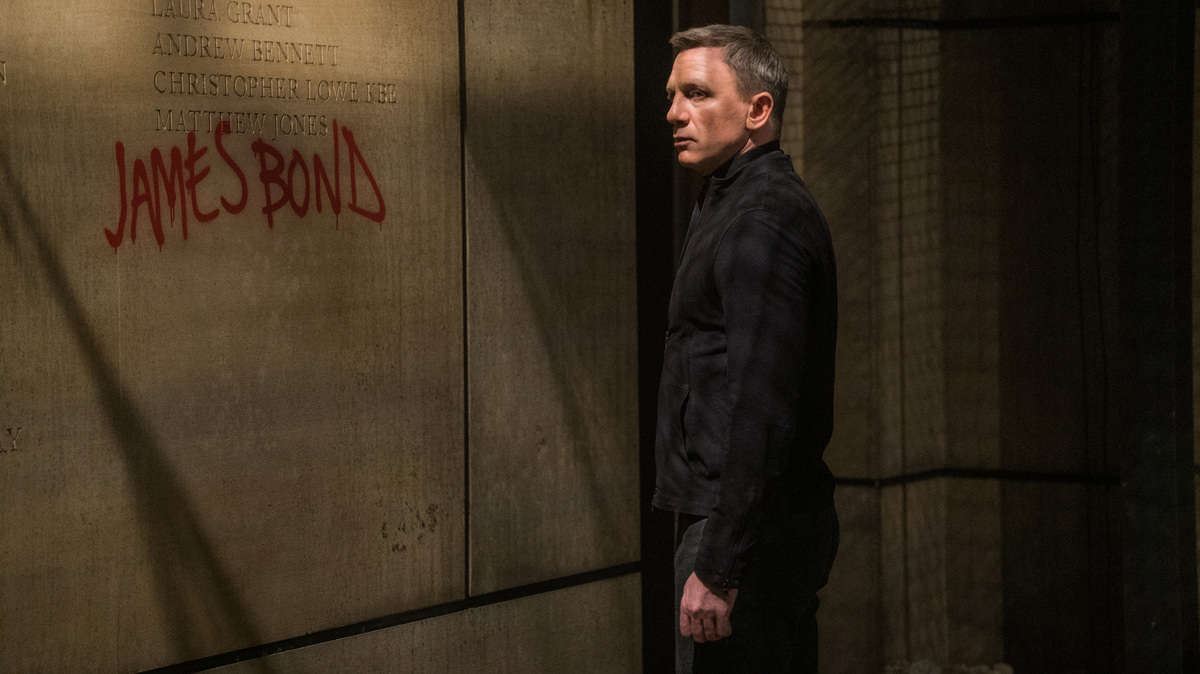 A million years ago in the 1960s, the only mandate for each new James Bond film was that it be grander, stranger and more exotic than the last. But in the hands of director Sam Mendes, who made 2012's Skyfall and the new Spectre, there's a troubling new mission requirement: Each 007 adventure must be progressively more nostalgic and reverential, too.

His new movie pleads the case for the hard-drinking spy's relevance in the era of drone assassinations and WikiLeaks even more loudly than Skyfall did (and with far less eloquence), while being paradoxically determined to reprise all of Bond's Greatest Hits. As with any aging rock band, the set list overwhelmingly favors the enterprise's first decade: There are echoes of Bond's train fight with a hulking Robert Shaw in From Russia with Love, his combat-optimized Aston Martin (and white dinner jacket) from Goldfinger, the spectacularly designed villain's lair from You Only Live Twice, and the stunning Swiss alpine outpost from On Her Majesty's Secret Service. There are also at least two too many callbacks to Casino Royale, the excellent 2006 reboot wherein newly minted 007 Daniel Craig gave the character a vulnerability and dimension he'd never had before — and, on the evidence of his granite-faced performance in Spectre, will probably never have again.

That friction between topicality and nostalgia makes for a gorgeous and dreamlike but ultimately frustrating Bond film. I blame Mendes. He did a great job with Skyfall, juggling modernity and sentiment in a manner befitting the franchise's 50th-anniversary installment. So potent was the nostalgia high it induced that not only did it become the series' all-time top earner, with $1.1 billion in receipts, but no one seemed especially troubled by the fact that in it, the bad guy won. Hey, it had to happen sometime.

Anyway, now would've been a fine time to drop all that baggage and back story and just send Craig's definitive Bond on a fabulous globetrotting adventure. Any of the journeymen directors responsible for the majority of the 23 previous Eon Productions Bond pictures could've handled this. (The ones who aren't dead are long retired, but you know what I mean.) But because Mendes is a fancy-pants artiste with an Oscar on his mantle (for the loathsome American Beauty), he feels obligated to proffer a sluggish metacommentary on the iconography of classic Bond. It's suffocating.

Where Spectre does break from the past, it's only to conform to the rigid rules of 21st century film-franchise governance, imposing a unconvincing and pointless interconnectedness onto the the events of the three previous Craig-era pictures. This insistence that all the varied trials his world-weary Bond has faced were the work of one man — Christoph Waltz, who may or may not be playing a certain oft-parodied international man of mystery who has long been absent from the series for exciting legal reasons — strains our suspension of disbelief more than any orbiting death ray or submarine-car ever did. And while no series has seen more obligatory romantic pairings than this one, Spectre's coupling of Craig with the substantially younger French actor Léa Seydoux (following a much publicized interlude with Monica Bellucci that lasts all of two scenes) rings particularly hollow after the palpable chemistry he shared with Eva Green in Casino Royale.

On the plus side, the likable trio that Mendes recruited to play Bond's MI6 allies — Ralph Fiennes' M (Bond's boss), Naomie Harris' Miss Moneypenny, and Ben Whishaw's Q — are all back, and given more to do than these characters ever have been. Mendes has borrowed a lot of tricks from the Christopher Nolan Dark Knight films for his Bonds; making the supporting cast more than just window dressing is one of the smarter ones. M is under pressure from a high-ranking official (Sherlock's Andrew Scott) to shut down the archaic double-0 section in favor of an omnipresent electronic surveillance regime. If this seems awfully similar to subplots in last year's Captain America: The Winter Soldier or this summer's Mission: Impossible — Rogue Nation (both more thrilling thrillers than Spectre, it pains me to say), we'll chalk that up to audiences' increasing discomfort at being asked to cheer for high-tech spy agencies with little oversight and limitless budgets.

The cold open, at least, is pretty spectacular. It's the kind of bravura shot rarely seen in this series, a Touch of Evil-inspired long steadicam take that follows a disguised 007 and his fetching plus-one through a Day of the Dead parade in Mexico City. (That he doffs his skeleton costume for an impeccable Tom Ford suit before springing into action has nothing to do with tactics and everything to do with optics.) A melee in a helicopter careening dangerously above the bystander-packed Zócalo leaves Bond in a possession of a laughably conspicuous jewelry-clue (one that must have seemed pretty dumb even in Thunderball, the 50-year-old Bond picture that spawned it).

After a typically ornate title sequence combining Sam Smith's earsplitting theme song with CGI octopus tentacles, we're off to the races. Disobeying orders to stand down for the umpteenth time, Bond lights out for Rome, Austria and Tangier to follow a posthumous lead bequeathed to him by Judi Dench's M, who was assassinated in Skyfall. A theater director by training, Mendes must've appreciated that 007, like Prince Hamlet, is doing the bloody bidding of a ghost.

These pictures have endured several cycles of decay and renewal in the 53 years since Dr. No. hit the screen. Craig is the fourth actor to to play James Bond a fourth time, and Mission 004 in each 007's run is historically where the films begin to go slack: 1965's Thunderball, 1979's Moonraker and 2002's Die Another Day were all divisive fourth installments immediately followed by necessary course corrections. (Despite the moaning they inspired among diehards, they were also huge hits — indeed, Thunderball stood for 47 years as the series' most successful entry until Skyfall beat it.) However Spectre is received, and regardless of whether Craig makes good on his threats to depart after this installment (for Bond actors to complain about the role is yet another well-established tradition), 007 should expect new orders after this. It's deep into the 148-minute move when the half-drunk, sleepless secret agent trains his Walther PPK on a rodent that's scurried into his Moroccan bungalow. "Who sent you?" he asks softly. "Who are you working for?"

It may seem like a silly question, but to paraphrase another immortal son of the 1960s, one Bob Dylan: Everybody's gotta serve somebody.

A previous version of this story misspelled Ben Whishaw's last name as Wishaw.