Accessibility links
Oil Boom Means Sky Watchers Hoping for Starlight Just Get Stars, Lite Light pollution has increased by 500 percent at Theodore Roosevelt National Park in North Dakota, thanks to nearby oil fields. Stargazers and oilmen are working together to find a solution. 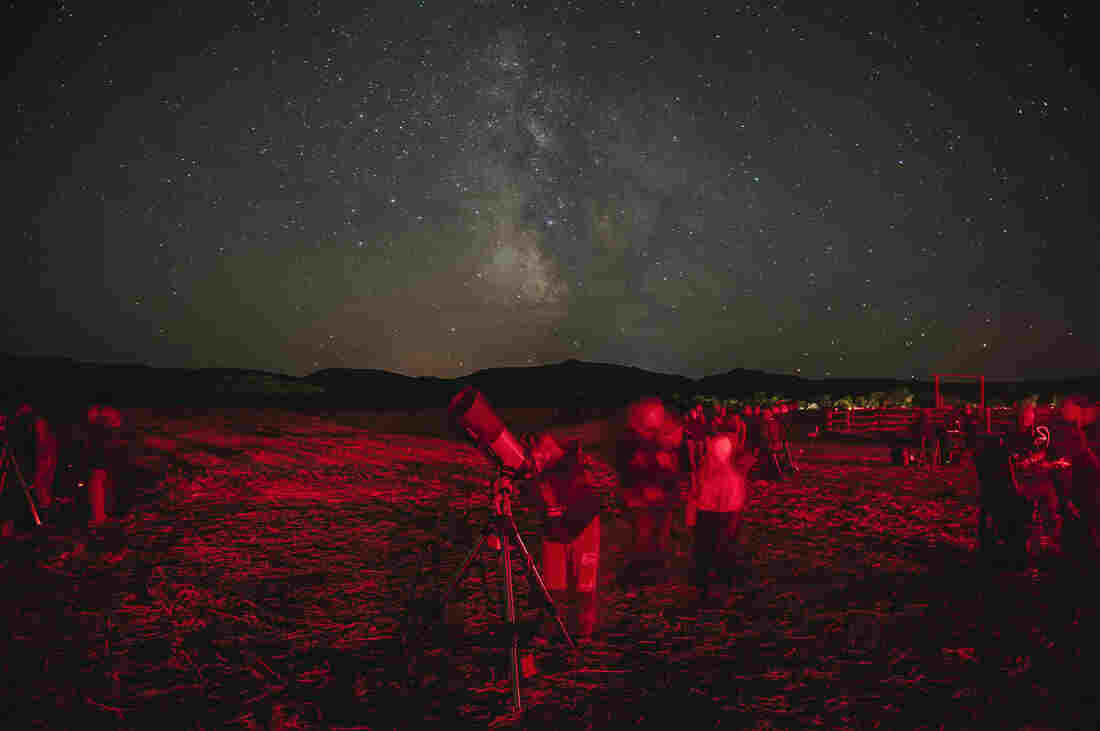 Star gazers flock to the south unit of Theodore Roosevelt National Park in western North Dakota for the annual Dakota Nights Astronomy Festival. Red lights were used during the event to help people move between telescopes without ruining their night vision. Between 2010 and 2013, the amount of non-natural light visible from the park increased by 500 percent, more than in any other national park. Andrew Cullen hide caption 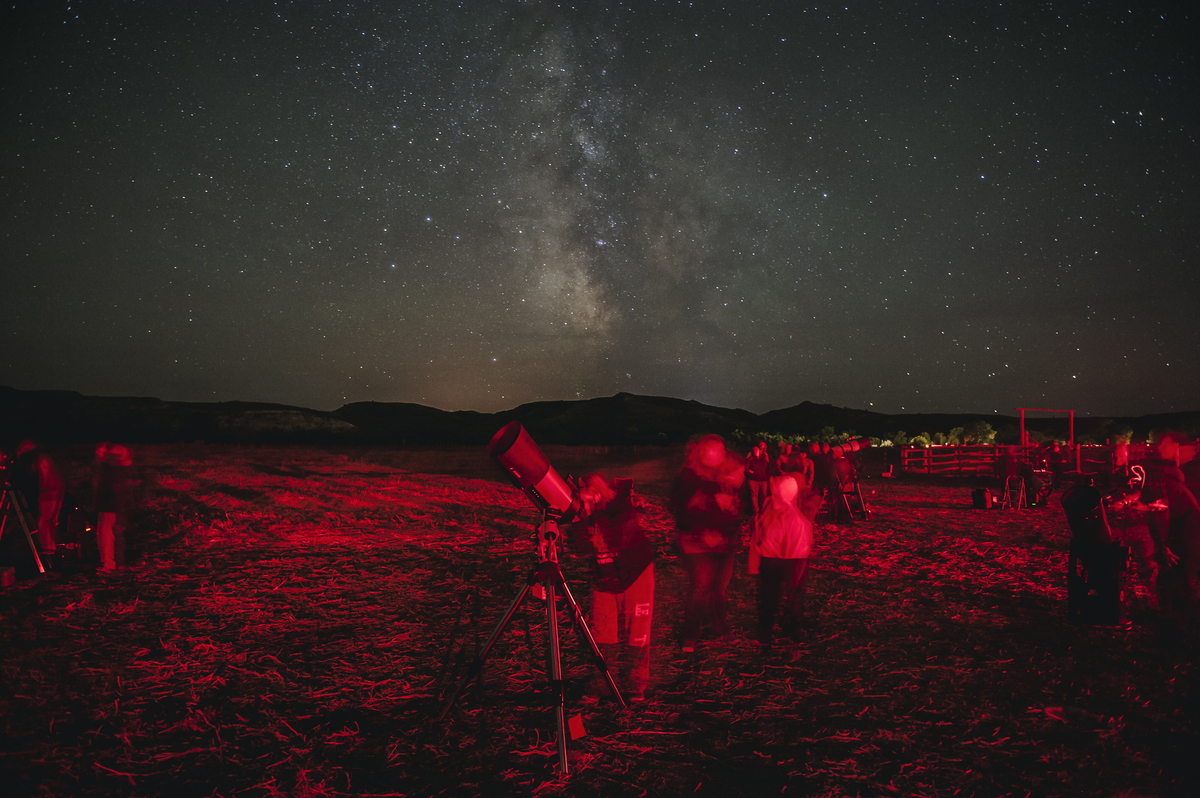 Star gazers flock to the south unit of Theodore Roosevelt National Park in western North Dakota for the annual Dakota Nights Astronomy Festival. Red lights were used during the event to help people move between telescopes without ruining their night vision. Between 2010 and 2013, the amount of non-natural light visible from the park increased by 500 percent, more than in any other national park.

It's getting harder to see the stars in North Dakota's Theodore Roosevelt National Park, and it's due to flares, drilling rigs and all the lights from the Bakken oilfield.

Since 2010, scientists with the National Park Service have measured a 500 percent increase in the amount of anthropogenic light there — no other national park in America has seen such a rapid increase in light pollution.

Kent Friesen is standing in a dark field in the North Dakota Badlands, peering into a huge telescope.

"You've gotta see this," he says to his wife, referring to the Andromeda Galaxy framed in the viewfinder.

They're from Denver, and are rarely in places as dark as Theodore Roosevelt National Park, which is holding a star gazing festival in September.

"I can easily look up, and there's the Milky Way. That's so easy to see. And you can't see that in Denver," he says.

If you live in a city, the night sky in western North Dakota will blow your mind. The stars are bright and there are so many more that you can see. But astronomy buff Jay Bjerke notices something's missing.

"Over there, you can't see stars between the horizon and 20 degrees up. That's the oilfields," he says, pointing at a butte that's silhouetted by a soft glow.

Half a dozen natural gas flares are blazing just outside the park fence. Park Ranger Jeff Zylland knows because he spent many nights this summer driving gravel roads in the dark, trying to find the sources of light pollution.

"Yeah there's light coming from the flares, but there's all of these trucking facilities, gas stations, and even cities that are just growing," Zylland says.

The National Park Service actually measures light pollution with a special camera. It found that between 2010 and 2013, light pollution in the park's north unit increased by 500 percent — faster than at any other national park in the country.

"It's really hard to get in front of something that is moving that fast and that is that big," Park Ranger Eileen Andes says.

She says they've been in triage mode here since the oil boom began. They're just now getting to light pollution. 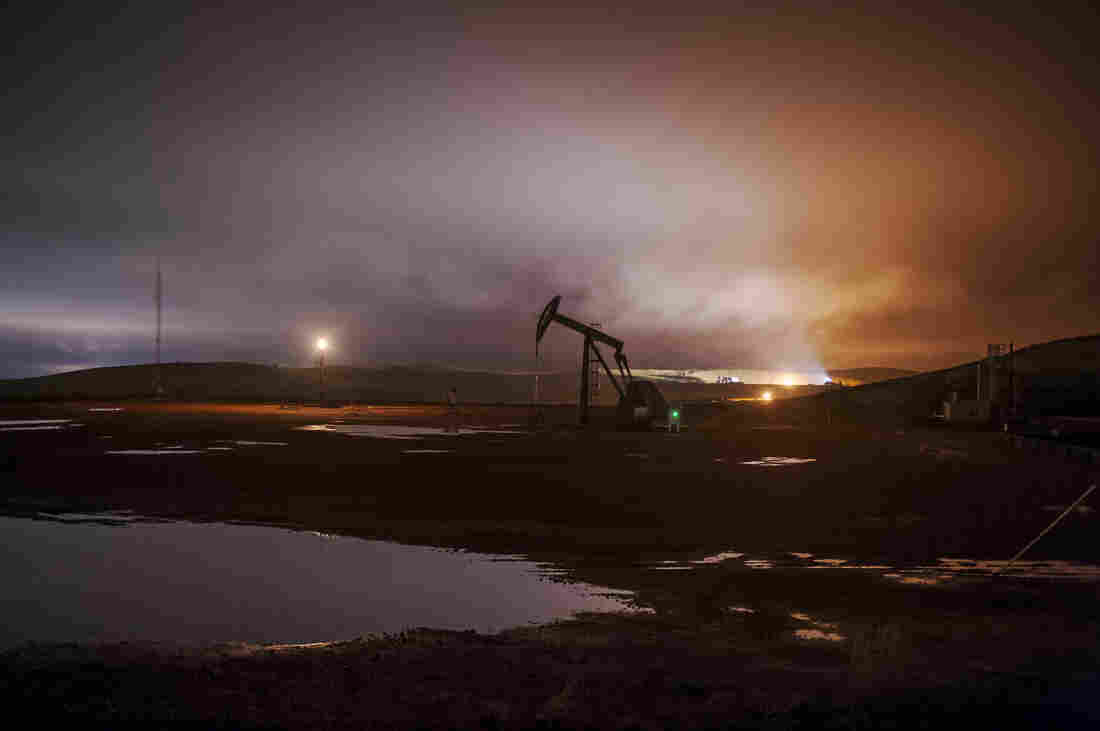 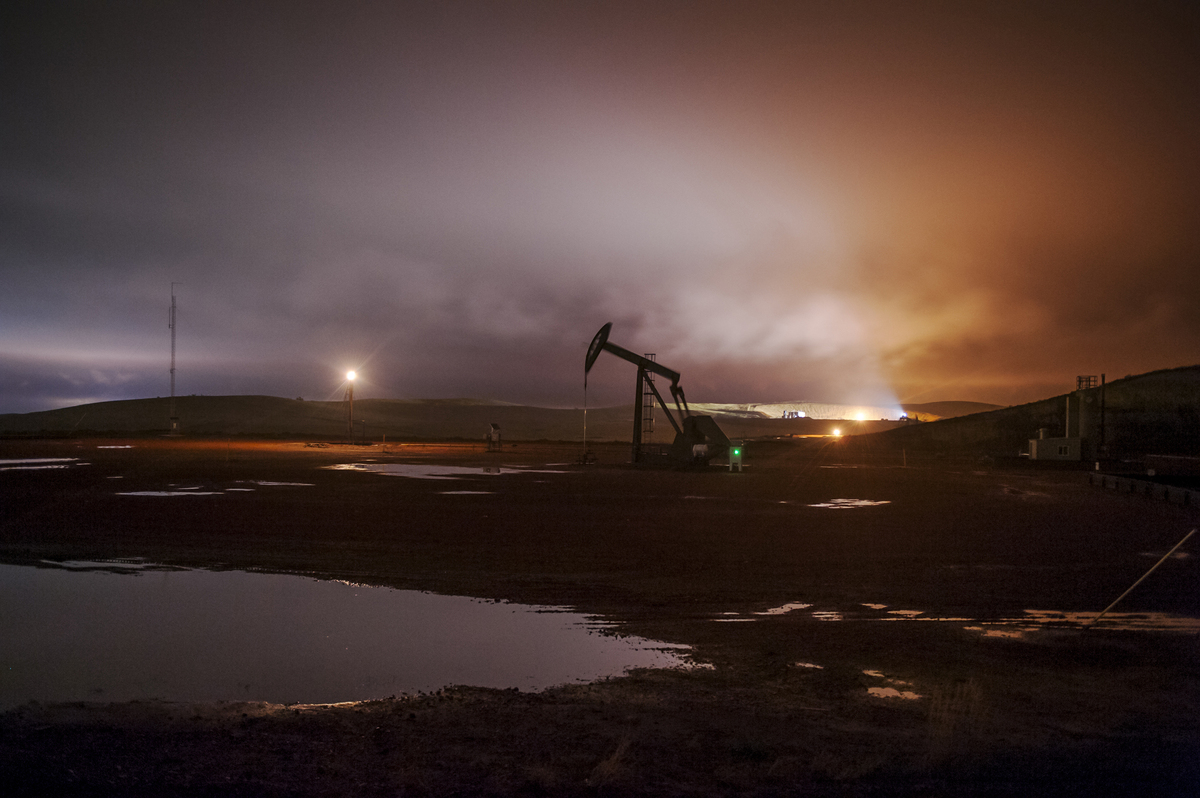 Even though the NPS has no control over what happens outside its boundaries, there are models of how to work with the oilfield to address light pollution. At the McDonald Observatory in West Texas' Permian oilfield, researchers are successfully working with two different oil companies to design more night-sky friendly lighting, and they're hoping to export their solutions to oilfields around the country.

"Our goal is nothing short of changing the way oil and gas industry lights their night time activities," Bill Wren says.

Wren is on a mission to keep west Texas dark. His colleagues are already straining to see faint light from distant stars.

"If the sky gets brighter than the faint source we're trying to see, then it's lost," Wren says.

When oil and gas development in the nearby Permian Basin took off a few years ago, Wren got worried and looked into enforcing some of the existing lighting ordinances passed decades ago to protect the observatory.

"I've had one person in the industry comment to me, if you start writing tickets, we're going to aim lights up in the sky just to piss you off," he says.

So Wren changed his approach, instead reaching out to some of the oilmen to explain the problem. Most of them had never thought about lighting before.

"Not at all," Stacy Locke, CEO of Pioneer Energy Services, says. He's also a man with a soft spot for the starry west Texas sky.

"It's just one of the great assets of that area, you just have dark skies, you can see stars from horizon to horizon," Locke says.

He wanted to help. The fixes were pretty simple: point lights down not up and switch to warmer-colored bulbs. Locke and Wren have written a paper about best practices. The key, Locke says, is getting the companies that own the well sites on board.

"They hire all of the service providers, so they can mandate, hey, if you wanna work for me, your equipment has to be dark sky compliant," Locke says.

As this is all happening, oil field light pollution may be decreasing. There's recently been a major slowdown in drilling activity, and that means fewer lights blocking out the stars — for now.