Accessibility links
Trump's New Book Doesn't Say Much, But Neither Do Lots Of Political Books The billionaire real-estate mogul's Crippled America, like any presidential campaigner's book, might be about publicity more than substance.

Trump's New Book Doesn't Say Much, But Neither Do Lots Of Political Books

Trump's New Book Doesn't Say Much, But Neither Do Lots Of Political Books 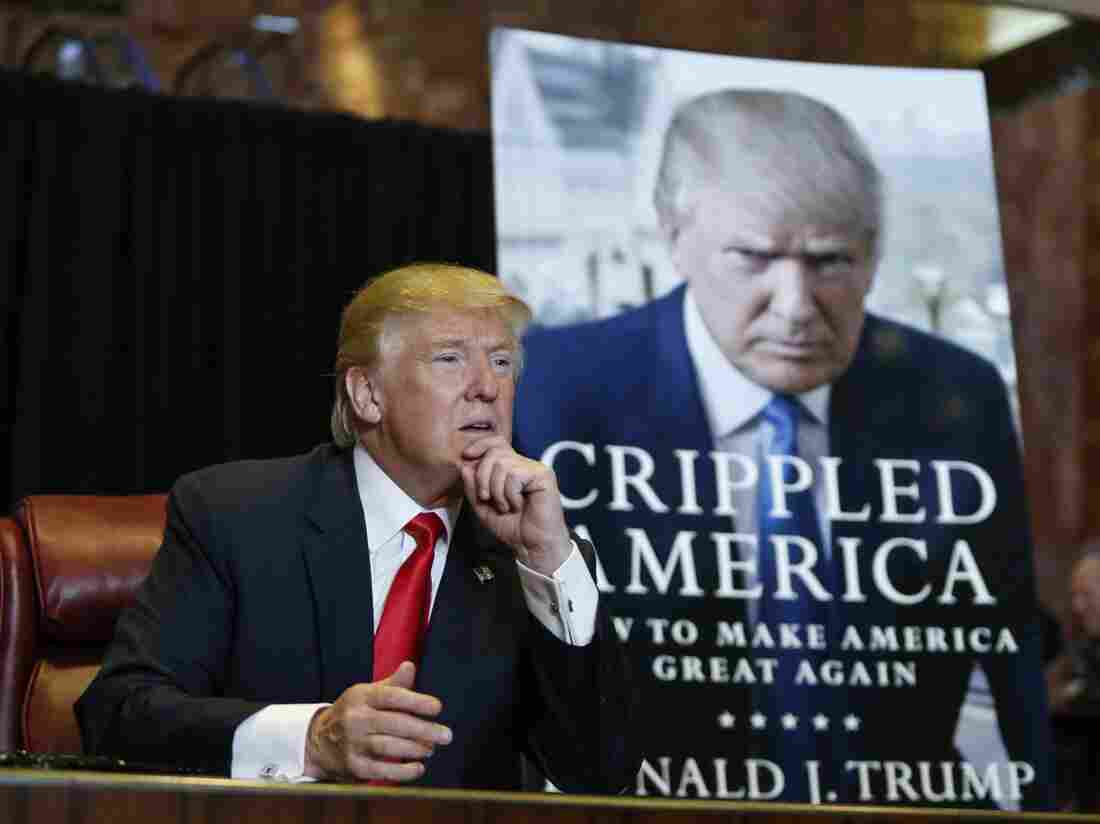 As with many campaign books, Trump's Crippled America functions in part as a supersized resume. KENA BETANCUR/AFP/Getty Images hide caption 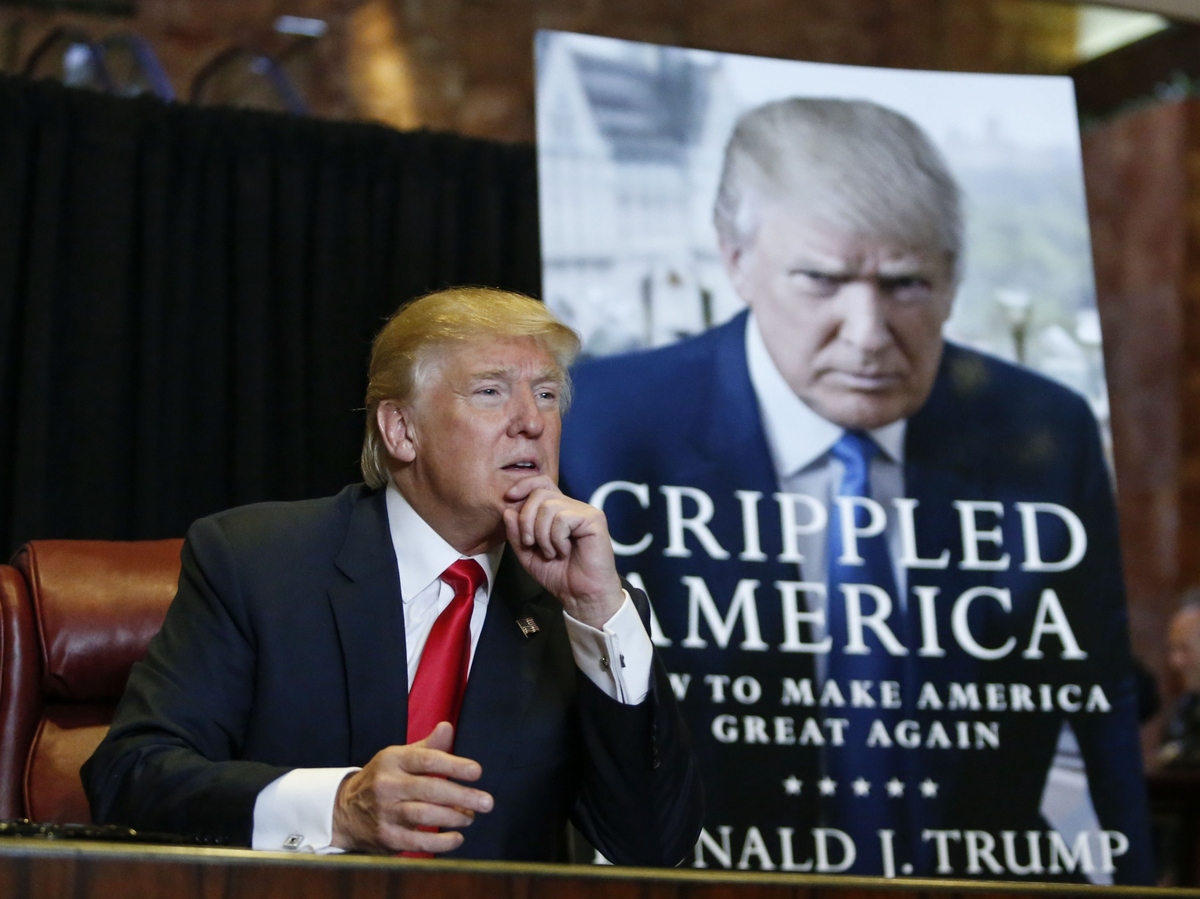 As with many campaign books, Trump's Crippled America functions in part as a supersized resume.

If you've paid attention to Donald Trump's speeches, you probably don't have to read his new book.

That's because Crippled America doesn't exactly break new ground. It reads like one of his teleprompter-free campaign speeches: loose, casual, disjointed and full of grandiose adjectives. You can almost hear him dictating it as you read his greatest-hits lines about "real Americans" and the economic threats that China poses to the U.S., mishmashed with a rundown of his main policy ideas and a few anecdotes from his past.

So what's the point of even writing it? He gets at a likely factor just a few pages in. 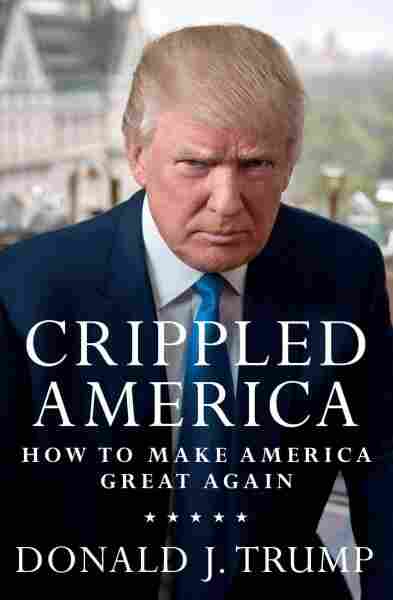 How to Make America Great Again

"The cost of a full-page ad in the New York Times can be more than $100,000. But when they write a story about one of my deals, it doesn't cost me a cent, and I get more important publicity," he writes. Crippled America isn't exactly a real estate deal, but it had a similar effect — Trump did a moderately newsy thing, and his face ended up on news channels and websites.

But then, here we are, writing about Trump's book. Indeed, lots of people took notice — cable news networks played his Tuesday-morning book press conference live. The book gave Trump another excuse to get behind a microphone, and the news media gamely paid attention.

Not all campaign books are so blunt ("Either we're fighting to win or we're going to continue to be big losers.") or as willing to go all-caps ("I have proven everybody wrong. EVERYBODY."), but on a basic level, lots of them do the same thing — they're publicity vehicles.

"It's incredible free publicity," says Matt Dallek, assistant professor of political management at George Washington University. "You're going to have free earned media because people will cover it. It becomes an event. And even if it's a bad book, it's still an event."

What's between the covers doesn't have to be Pulitzer material. The campaign book — published just before or during a candidate's run — is for many candidates less a literary work and more a political tool, functioning as a resume or a lengthy rundown of policy positions, often wrapped in an inspiring story (or, at least, an attempt at one).

It has a long history, too. The campaign-trail biography of a president was once upon a time an important introduction between candidates and voters.

"It grew out of the campaign biography tradition in the 19th century, when you had writers create a really good campaign biography and introduce the public to this person, because no one knew who he was," said Aaron Crawford, postdoctoral fellow at Southern Methodist University, where he studies presidential biographies.

Today, many of the candidates are already household names, with stump-speech YouTube videos a click away. A book hardly seems necessary, in the information-dissemination sense.

(Or, as Crawford added, "I've often wondered who buys these things.")

However, while the media challenges are different today, the goal today is similar: to get attention.

The campaign-trail book is another weapon in the arms race of media attention. Hillary Clinton's Hard Choices book tour got her a long line of TV interviews as she prepared to launch her campaign. And Ben Carson has been using his book tour for A More Perfect Union as an extension of his campaign, as NPR's Sam Sanders has reported. With the superPAC bus close behind the book tour bus, it's a great way for Carson to recruit more people to his cause.

" 'Would you like a book signing? Would you like to volunteer for the campaign?' It makes perfect sense," says Candice Nelson, academic director of the Campaign Management Institute at American University.

The campaign-trail book can also be an attempt at reframing a campaign. Case in point: Jeb Bush released a book this week — an e-book called Reply All, told using his emails written as governor of Florida.

As with Trump's book, there have been no major revelations from Bush's book just yet (admittedly, I haven't read it all). Rather, it's widely viewed as a part of his campaign revamp — a way for the flagging candidate to tout his record as governor and recast himself as the "joyful" campaign-trail warrior he once said he wanted to be. After all, his book opens with a chapter called "This is Exhilarating" and ends with one titled "This Job Gives Me Great Joy!", as The Associated Press points out.

When a book is a campaign book, the compelling-narrative bar seems to lower a few notches. As the New York Times' Peter Baker wrote in a review of Clinton's 2014 Hard Choices: "perhaps it's more fitting to compare her memoir not with the diplomatic histories of other secretaries of state but with the pre-campaign books of other would-be presidents."

Baker characterized Clinton's book as a "safe and unchallenging volume, full of bromides and talking points." It was simply no match for Dean Acheson's 1969 book about his years as secretary of state, Present at the Creation. Other major reviewers also panned the book as "careful" and news-free. (Still, compared with other campaign books, Baker also called Clinton's "a cut above.")

Similarly, President Obama's 2006 The Audacity of Hope paled in comparison with his 1995 Dreams from My Father for some reviewers. Despite giving Audacity a generally positive review, the Times' Michiko Kakutani called it a "political document," adding, "portions of the volume read like outtakes from a stump speech, and the bulk of it is devoted to laying out Mr. Obama's policy positions on a host of issues."

As for Trump, the timing of his book release may be more a strategic decision than an attempt to get his policies into voters' hands; his poll numbers are slipping, while Ben Carson has taken center stage.

Still, while Crippled America may fill the same purpose as any other presidential candidate's campaign-trail book, Trump probably wins the award for frankness.

Just as he talks about the joys of free publicity, he admits to inflating his rhetoric for political gain: "[S]ometimes I make outrageous comments and give them what they want — viewers and readers — in order to make a point. I'm a businessman with a brand to sell. When was the last time you saw a sign hanging outside a pizzeria claiming 'The fourth best pizza in the world'?!"

Outrageous comments get attention, and they might even sell a few books. Whether they can send Trump to the White House is a different question entirely.