Accessibility links
'Ballad For Americans' Sent 'Message Of Unity' In 1940 Presidential Race In the 1940 presidential campaign, one song reached across party lines and had everyone cheering. It was an unlikely hit: "The Ballad for Americans," an operatic folk cantata that ran 10 minutes. 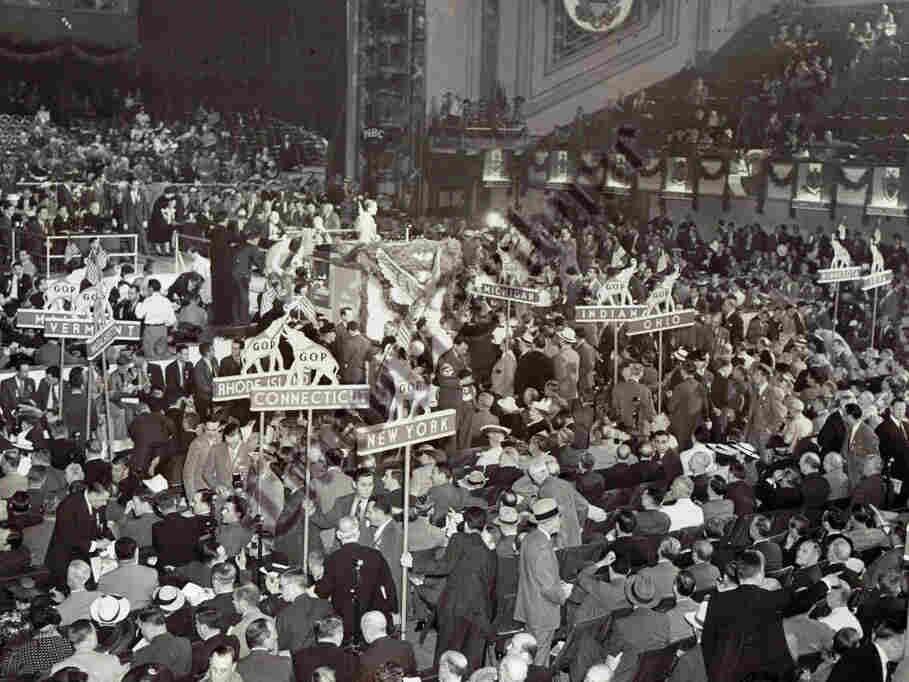 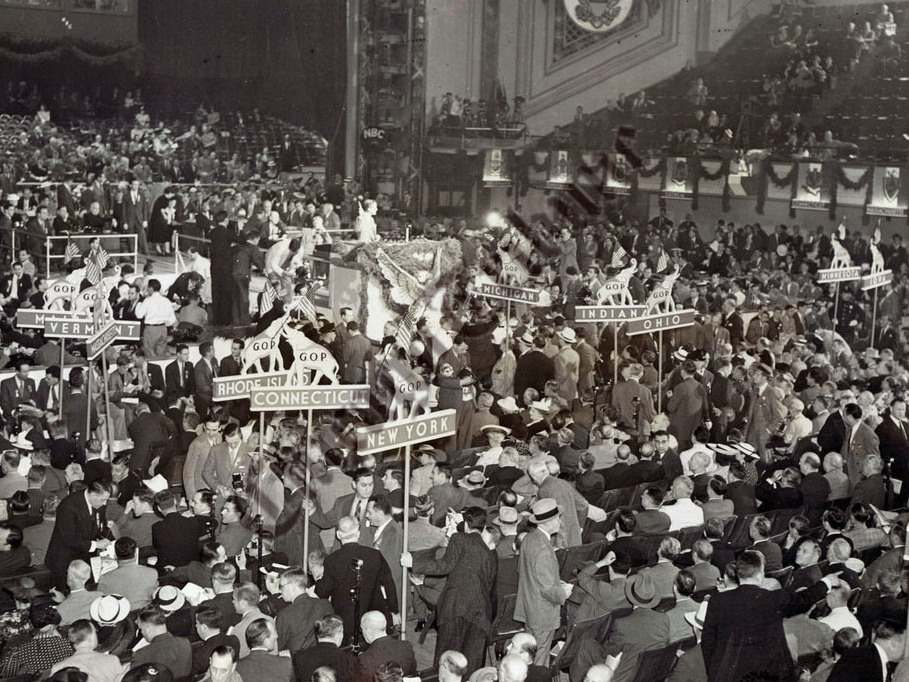 Delegates gather for the 1940 Republican National Convention in Philadelphia, Penn.

Political campaigns today are choreographed down to songs played at campaign stops.

Sometimes those songs can be controversial: Republicans Ronald Reagan and Chris Christie both used Bruce Springsteen anthems, and "The Boss" himself objected.

But in the presidential campaign of 1940, one song reached across party lines and had everyone cheering. It was unlikely hit: "The Ballad for Americans" was an operatic folk cantata that ran 10 minutes.

Use the audio player above to hear the full story.

This story was produced by Ben Shapiro and edited by Deborah George, with help from Joe Richman, Sarah Kate Kramer, and Nellie Gilles of Radio Diaries. You can find more of their stories on the Radio Diaries Podcast, which is part of Radiotopia from PRX.

Political campaigns today are choreographed down to the songs played at campaign stops. Sometimes the songs get politicians in trouble. Ronald Reagan and Chris Christie both used Springsteen anthems. The boss himself objected. But in the presidential campaign of 1940, one song reached across party lines and was an unlikely hit - an operatic folk cantata that ran 10 minutes. The song debuted 76 years ago today - from producer Ben Shapiro and Radio Diaries, the story of "Ballad For Americans."

JACK TULL: My name is Jack Tull (ph). I grew up in Southern Michigan, a little town - Jonesville. It was a pretty small world with bigoted attitudes about, for example, people from Ohio and Indiana.

NATHAN: I remembered hearing "Ballad For Americans" at my aunt and uncle's.

NATHAN: We were all gathered. It was a big moment that we were going to hear this. That's why I remember it.

UNIDENTIFIED MAN #2: One aim of this program is to discover and perform new American music. Today, we offer our first effort in that direction, "Ballad For Americans" and the singer Paul Robeson.

PAUL ROBESON: (Singing) In '76, the sky was red, thunder rumbling overhead. That King George couldn't sleep in his bed. And on that stormy morn, old Uncle Sam was born.

LISA BARG: My name is Lisa Barg. I teach music history at McGill University. "Ballad For Americans" is sort of a musical pageant of American history. There's an ominous narrator sung by Paul Robeson, and the chorus is always asking, who are you, Mister?

UNIDENTIFIED CHOIR: Hey. Would you please tell us who you are?

UNIDENTIFIED MAN #4: Where you going?

UNIDENTIFIED MAN #5: Who are you?

ROBESON: Well, I'm everybody who's nobody. I'm the nobody who's everybody.

NATHAN: I think he was talking about the little person, the guy in the street, the social worker, the guy who pushed the pushcart.

MORRIS DICKSTEIN: My name is Morris Dickstein. My most recent book is a cultural history of the 1930s called "Dancing In The Dark." "Ballad For Americans" presented a kind of overview of American society at a time when there were serious problems, such as lynching and racial segregation and anti-immigrant feeling.

UNIDENTIFIED WOMAN #1: It felt very good that somebody was talking about all of America and not just a few people.

UNIDENTIFIED WOMAN #2: And then in the final passage of the piece, he reveals his true identity.

ROBESON: (Singing) And you know who I am.

UNIDENTIFIED CHOIR: Who are you?

UNIDENTIFIED MAN #6: The people stamped and whistled and shouted bravo. And the telephone switchboards were jammed, and bales of lettuce came in.

UNIDENTIFIED MAN #1: This is the Columbia Broadcasting System.

DICKSTEIN: The song went into orbit and, by the following year, was a very popular concert item.

BARG: We would say today the work went viral.

UNIDENTIFIED MAN #7: Welcome to the thousands of people here gathered in the auditorium of Hunter College in the city of New York. We open with a work which, in one short year, has been accepted as the musical expression of America and the American way of life.

DICKSTEIN: Well, you have to remember that between the time that "Ballad For Americans" was put on the radio in November 1939 and the spring of 1940, there was a tremendous change in world history.

SUSAN DUNN: My name is Susan Dunn, and I'm the author of "1940: FDR, Willkie, Lindbergh, Hitler - The Election Amid The Storm." On June 22, France surrenders to Nazi Germany. It was a difficult time, and "Ballad For Americans" had a message of unity a time when the nation desperately needs unity to face this Nazi menace.

UNIDENTIFIED WOMAN #1: And 1940 was the year of the national elections.

DICKSTEIN: "Ballad For Americans" was sung at the various political conventions of that year, including, very famously, the Communist convention...

DICKSTEIN: ...As well as the Republican convention.

UNIDENTIFIED MAN #9: We will now hear a musical selection for this evening's session.

DICKSTEIN: The vague patriotism and Americanism of the song was appealing across the political spectrum.

UNIDENTIFIED MAN #9: A song which has created a sensation since it was first heard over the radio just a few months ago, "Ballad For Americans."

DUNN: One of FDR's final campaign speeches in 1940 was at Boston, and this is what he said. In our own American community, we have sought to submerge all the old hatreds, all the old fears of the old world.

FRANKLIN D. ROOSEVELT: ...Of the old world. We are Anglo-Saxon and Latin. We're Irish and Teuton and...

DUNN: His speechwriters weren't afraid to borrow from pop culture.

ROOSEVELT: We are Americans.

UNIDENTIFIED MAN #10: "Ballad For Americans" had quite an extensive life until the postwar period when people like Robeson were blacklisted and treated as being subversive.

UNIDENTIFIED WOMAN #3: It was literally ripped out from the school music books because of the blacklist.

UNIDENTIFIED MAN #10: And this was pretty much the end of the popularity of the song.

NATHAN: Well, looking back, it spoke to everybody and anybody who was anybody. I think that's even in the lyrics. I don't think it's that way anymore. But I have gone around singing the first few lines to my kids since they were born. When we would have thunderstorms, I would - my kids would get nervous. I'd sing, (singing) in '76, the sky was red. Thunder rumbled overhead. And they would get hysterical laughing. But they weren't afraid of thunder after that.

ROBESON: (Singing) In '76 the sky was red, thunder rumbling overhead.

SIEGEL: Thanks to Rita Post, Rita Post and the late Norman Corwin who produced the original broadcast of "Ballad For Americans." Our story was produced by Ben Shapiro and edited by Deborah George for the series Radio Diaries. You can hear more of their stories on the Radio Diaries podcast.