There's Method To The Mad Satire Of 'Censorship Now!!'

There's Method To The Mad Satire Of 'Censorship Now!!' 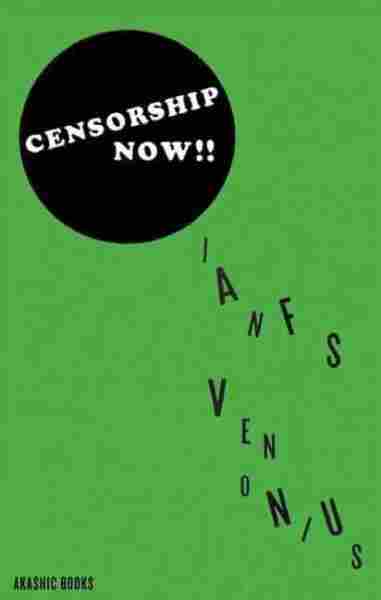 Ian Svenonius is a strange man. Anyone who's followed his career over the past 25 years knows he has a knack for incendiary sloganeering that often borders on the surreal, first as the singer in the legendary Washington, D.C. punk band The Nation of Ulysses (he currently leads the "crime rock" group Chain and the Gang) then as the author of the nonfiction books The Psychic Soviet and Supernatural Strategies for Making a Rock 'n' Roll Group. In his stylish, suit-and-tie persona as a pop-culture gadfly and revolutionary rhetorician — which may or may not be a self-caricature; part of his appeal is his Andy Kaufman-like commitment to character — he's put forth ideas as bizarre as comparing Fidel Castro to The Velvet Underground. Favorably, of course.

Svenonius' new book is Censorship Now!!, and the title alone shows just how provocative the author can be. A collection of essays previously published by Vice, Jacobin, and others, it sets up numerous enemies — both real and straw — for Svenonius to knock down. "The Historic Role of Sugar in Empire Building" comes across as a mini-parody of Mark Kurlansky's Salt: A World History; "The Documentary Crisis," which decries the truthiness of today's documentarians, is an uneven mix of undergrad opinion paper and Old-Man-Yells-At-Cloud rant. It's all couched in a style that's part anarchist tirade, part postmodern critique, and part punk-rock snottiness — yet it's addictively ridiculous.

Svenonius has many targets, but he saves most of his wit, grace, and savagery for mass media and pop culture. In "The Artist and Immortality," he sends up the entire pseudo-intellectual discourse surrounding rock culture (cutely citing his own former band The Nation of Ulysses as if he were a detached observer); in "The Rise and Fall of College Rock," he rails against the media outlets he feels have helped gentrify the radio dial (including, ahem NPR).

It's as though the front and back covers of 'Censorship Now!!' are two mirrors placed on either side of Svenonius, infinitely reflecting his prankish screeds and paradoxical theories.

He slips earnestness inside the cartooniness, even when Censorship Now!!'s title essay lays out his most modest proposal — a universal censorship that will free humanity from all oppression. Swiftian and Stalinist in equal measure, it's a piece of logic-twisting polemic that serves what may be Svenonius' ultimate purpose: To jar us, like some Zen riddler, from our accepted ways of thinking.

The crazy talk just keeps on coming — except when it isn't. Here's his conspiracy theory behind the hard-to-read instruction manuals that come with cheap furniture, which he says sow discord between otherwise happy romantic partners: "Ikea wants couples to break up. Each breakup results in more bachelors and bachelorettes, which results in more Ikea products sold." And his reasons why people shouldn't tip service industry workers: Gratuity is "an exploitative business model," "an act of dominance," and "a guilt fee." The Ikea idea is gleefully ridiculous; the anti-tipping sentiment, on the other hand, is one that's actually gaining ground in places like New York City, where there's a trend of restaurateurs abolishing gratuity in favor of raising the hourly wages of their employees.

This is why it's difficult to tag Censorship Now!! as a wholesale work of satire — and why the book, for all its entertaining lunacy, sometimes muddles its own voice. For every burst of inspired argumentum ad absurdum such as "Music and the Struggle Against Sanity," there are maddeningly reflexive statements such as "For many poor souls, there is no alternative to the alternative."

It's as though the front and back covers of Censorship Now!! are two mirrors placed on either side of Svenonius, infinitely reflecting his prankish screeds and paradoxical theories. The greatest paradox of all, of course, is that Censorship Now!! itself would be banned under the outlandish plan proposed in its title, a clear shot at the arbitrary way we view and apply the ideals we hold most dear. It's Svenonius' strangest punch line — and his most playfully profound message.