Accessibility links
'Tiffany Girl' Is A Jeweled Window Into The Past Deeanne Gist's Tiffany Girl blends a charming romance with an overlooked bit of history — the women recruited by Louis Comfort Tiffany to complete his stained glass chapel at the 1893 World's Fair.

'Tiffany Girl' Is A Jeweled Window Into The Past

'Tiffany Girl' Is A Jeweled Window Into The Past 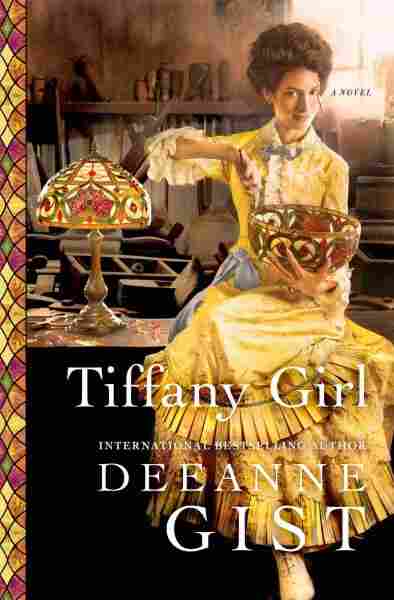 We've just bid farewell to October — which made me think of a simply charming romance novel that takes place during the Chicago World's Fair, which lasted over a year and ended at the end of October, 1893.

Deeanne Gist's Tiffany Girl revolves around the glassworkers' strike that threatened Louis Comfort Tiffany's commitment to provide stained glass for the Fair's chapel. Rather than capitulating to the workers' terms, Tiffany hired women to do most of the staging, which included almost every step of the process (including cutting the glass) before soldering — a job considered 'mannish.'

The book follows Flossie, a young Tiffany Girl just spreading wings of independence at a time when such things were frowned upon; and Reeve, a journalist who tells himself he disapproves of everything about Flossie, but winds up falling under her spell anyway.

Gist does an amazing job of telling a complex love story against a backdrop of social and personal change; Flossie starts out in her parents' home, practically a slave to her father's gambling, as she and her mother sew morning to night to try to make enough to overcome his losses. Flossie's one pleasure is art — and she's outraged when her father's losses force her to abandon her studies. But a chance meeting with Louis Comfort Tiffany at her last class lands her a job with his glass company, and she leaves home for a boarding house, much to her parents' chagrin.

Flossie is a fascinating character; she's determined to make her own way in the world, but convinced it's a benevolent place where people ought to like each other. She starts out as likable yet immature, then grows into a stronger, more seasoned version of herself — an interesting juxtaposition against Reeve's growing understanding that his ideas about New Girls — modern working women — are flawed and simplistic.

'Tiffany Girl' isn't short, topping just over 500 pages, but goes as quickly as a much shorter book, and it it casts a bright light on an era when women were struggling to find a place in the world that did not begin and end with marriage.

Tiffany Girl isn't short, topping just over 500 pages, but goes as quickly as a much shorter book, and it casts a bright light on an era when women were struggling to find a place in the world that did not begin and end with marriage. And, just as importantly, struggling with the social problems caused by their progress — men's fear and fascination, and their reactions to the striving New Girls.

This peek into Tiffany's glass empire is vibrant and textured, and Gist's notes at the beginning and the end of the book sift through fact and fiction for even more appealing details. Her choice to use occasional illustrations adds another compelling artistic layer.

There are many reasons women read romance novels, just as there infinite versions of what a romance novel is. I enjoyed Gist's literary stroll through a near-forgotten time, and her celebration of the triumph of the Tiffany Girls. I love the reminder of what came before — in a professional sense, in a fashion sense; regarding propriety and society.

Romance novels explore every aspect of history and continually offer windows on the past — and sometimes we discover those windows are brilliant, colorful, exquisite stained glass masterpieces, created by women.