Accessibility links
Gotcha! Can't Politicians Handle Tough Questions? Most politicians can agree on at least one thing: "Gotcha" questions have got to go. But "gotcha" journalism isn't new — the idea and the accusation gained traction during the '90s. 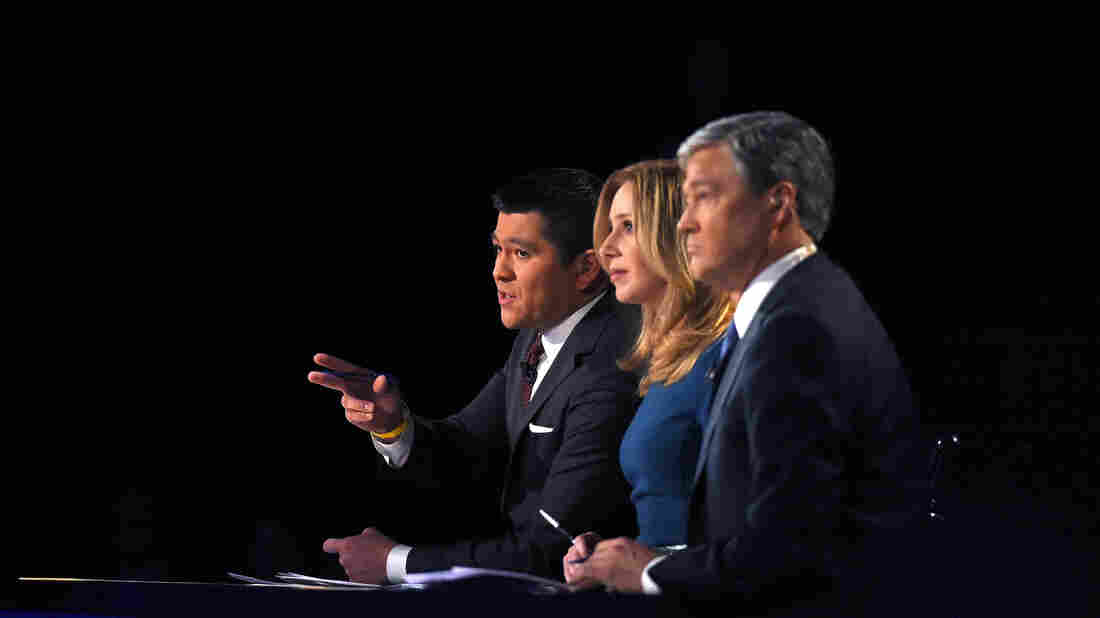 Debate moderators Carl Quintanilla (from left), Becky Quick and John Harwood appear during the CNBC Republican presidential debate on Oct. 28. Most Republican candidates agreed on at least one thing following the debate: "Gotcha" questions have got to go. Mark J. Terrill/AP hide caption 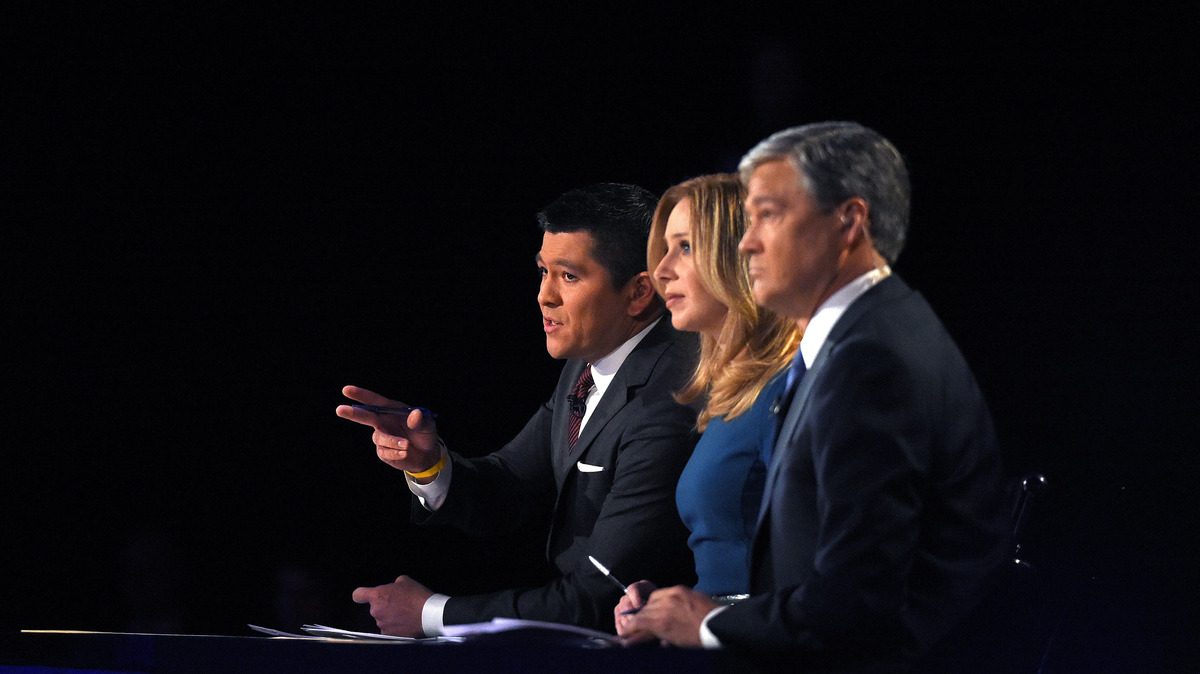 Debate moderators Carl Quintanilla (from left), Becky Quick and John Harwood appear during the CNBC Republican presidential debate on Oct. 28. Most Republican candidates agreed on at least one thing following the debate: "Gotcha" questions have got to go.

Democrat, Republican, independent — it doesn't matter. They all love griping about the "gotcha" question.

Politicians of all stars and stripes say "gotcha" has got to go. And with the fervor of attacks against "gotcha" questions, you might think the term, or the accusation, was new. Not so fast.

Merriam-Webster defines "gotcha" as "an unexpected problem or usually unpleasant surprise." It's often paired with an exclamation mark for emphasis on its ambush-like nature.

The meaning of "gotcha" in a political context is hotly debated — and it usually depends whom you're asking.

"Gotcha" journalism is "what politicians frequently accuse reporters of when doing their jobs of trying to uncover information," Chuck McCutcheon and David Mark wrote in Dog Whistles, Walk-Backs and Washington Handshakes. The two journalists wrote the book in an effort to decode the political jargon tossed around in our nation's capital.

Politicians would probably fire back with a different definition, one that mentions catching them off guard with the goal of making them look bad.

'We Know You're A Fraud Somehow'

When did the wordplay begin?

Although the expression "gotcha" can be found as early as the 1930s, its relationship with journalism came into vogue in the late 1980s and early '90s.

American presidential candidates were never directly questioned about their marriage tomfoolery until 1987, when Paul Taylor broke journalist tradition by asking Gary Hart a question that had never been asked before: "Have you ever committed adultery?"

Ask a question that's 1) accusatory by inference and 2) might cut at a candidate's character? Gotcha!

What Do Cheating And Cocaine Have In Common? Gotcha!

In 1992, NBC News correspondent Stone Phillips asked President George H.W. Bush if he'd ever had an affair, another example of so-called "gotcha" journalism.

Bill Clinton called similar questions about his own marital infidelity "a game of gotcha" during his presidential run in 1992.

George W. Bush complained that reporters asking him about cocaine use were asking "gotcha" questions in 1999.

After the first accusation of "gotcha" journalism in the early '90s, the term quickly cemented itself in candidates' lexicons. It became known as "campaign coverage dominated by attempts to reveal youthful misbehavior," writes Calvin Trillin in a 1999 issue of Time magazine.

This observation gets at the root of candidates' discontent with "gotcha" journalism: the perceived intent to personally embarrass them and destroy their carefully curated public image.

The idea of a "gotcha" question rose to further prominence in 2007, when Chris Matthews of MSNBC said, "The gotcha politics will begin, each side trying to catch the other" and accused the press corps of wanting to "play gotcha!"

GOP Says No To 'Gotcha'

Listen to the radio, read a newspaper or scroll through Twitter — there was no shortage of complaints following the CNBC-hosted Republican debate on Oct. 28.

Texas Sen. Ted Cruz went off on a passionate soliloquy during the broadcast, saying, "The questions that have been asked so far in this debate illustrate why the American people don't trust the media."

In a rare moment of agreement among the candidates, he was joined by Donald Trump, who said the questions weren't asked nicely enough. And that's even by New Jersey standards.

It didn't end there.

Afterward, Republican front-runner Ben Carson called "gotcha" questions silly and, when asked to define the term, pointed to a specific inquiry into his involvement with a controversial health-supplement company, Mannatech.

In a letter to NBC Chairman Andrew Lack, RNC Chairman Reince Priebus called the questions "inaccurate or downright offensive" in addition to being "petty and mean-spirited in tone, and designed to embarrass our candidates," and the GOP suspended their debate partnership with NBC News.

If you don't like the question, does that automatically make it a "gotcha"?

The vehement answer from most journalists is no.

"I don't set out to injure a candidate or embarrasses them but to elicit from them key information on the most important issues of the day, which involves their specific race. I aim to illumine," writes radio talk-show host Hugh Hewitt.

He says it is journalists' duty to make candidates answer tough questions.

Some journalists, like Congressional Quarterly's Jeff Stein, acknowledge that some questions are crafted to be a "gotcha" but shine light on important issues.

He drew flack in 2006 for asking members of Congress if they could explain the difference between a Shiite and a Sunni in relation to the Iraq War. Most couldn't.

Domenico Montanaro, formerly from PBS NewsHour and now an editor on NPR's politics team, has said that, "Even these 'gotcha' questions — designed as a litmus test of rationality — can be revealing of their mindset, their depth and their mettle as a candidate."

Are politicians really that afraid of a tough question?

As Time magazine observes: If you don't like the question, attacking the person who said it — and their intentions — is a much-used tactic. We won't be saying goodbye to the "gotcha" debate anytime soon.

In honor of all the ruckus surrounding "gotcha" questions today, here are some of the most well-known "gotcha" moments for your viewing pleasure. Keep an eye out for more during the next GOP debate Tuesday.

Kylie Mohr is a digital news intern at NPR.org.