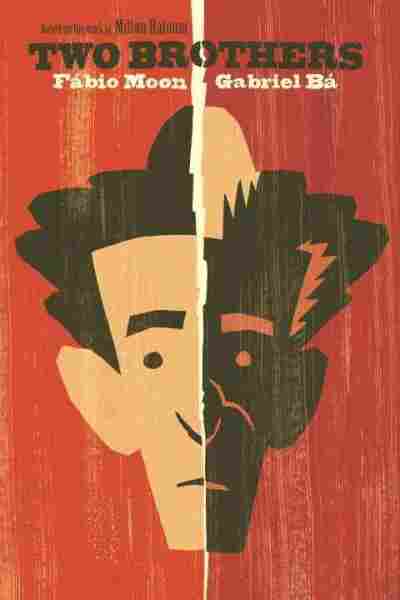 by Fabio Moon and Gabriel Ba

Wild foliage, the cries of fishmongers, near-crazed love, musty rooms and forbidden sex overspill Brazilian author Milton Hatoum's 2000 novel The Brothers. For Fábio Moon and Gabriel Bá, adapting this book into comic form must have seemed both scary and inevitable. The second novel from the multiple-award-winning Hatoum, it concerns two men who are twins — just like the Brazilian artists, who have themselves won multiple awards. Set in a Lebanese immigrant community in the Amazonian port city of Manaus, The Brothers is fairly short — 245 pages — and sensually dense, every paragraph offering manna for an illustrator. Moon and Bá scoop up the tasty stuff with both hands.

That's not to say they haven't exercised careful judgment with this surfeit of material. In fact, one key act of restraint provides the graphically defining feature of Two Brothers: Moon and Bá dispense with color illustration and even forego gray tones, drawing entirely in black and white. They use some crosshatching and other textures here and there, but mostly they rely on stark planes and broad, graffiti-brush swipes of ebony to capture Hatoum's world and the larger-than-life family that inhabits it. Ironically, while this family's members imagine themselves in terms of stark contrasts, both the narrator and the reader come to see them in shades of gray.

In Hatoum's book, this is conveyed through the looping repetition of certain stories and the tantalizing muddying of others. Different characters recall different versions of the day when Halim snared his bride Zana by declaiming stanzas of Arabic poetry in a crowded restaurant. But nobody in the family thinks much about Domingas, the Indian maid, or about her son Nael, whose patriarchy is a mystery.

"I was allowed inside the house," Nael recalls of his childhood. "I could sit on the gray sofa in the living room, and I could eat their food. The family didn't mind. ... Zana invented thousands of tasks every day. With my uniform on and ready to go, an order from Zana would put an end to my morning in school. I missed classes two or three times a week."

Halim, Zana and their daughter Rânia are insensible of judgment. They're far too absorbed with the epic rivalry between the twins, Yaqub and Omar. But it's Nael who will come to know both men as fathers, witness the family's eventual downfall and take ownership of its story as narrator.

They don't seem to be interpreting Hatoum so much as carrying his tale forward into a new realm of understanding. It's a realm that's anything but black-and-white.

Moon and Bá's chiaroscuro lends itself naturally to the book's big set pieces. Most involve the twins, who clearly represent Old and New Brazil. Yaqub, in military-style uniform, marches in the Independence Day parade; Omar's paramour, the Silver Woman, dances for a mesmerized crowd; Halim beats up a drunken, naked Omar and chains him to the family safe. And virtually every panel featuring the people and boats of the town is compelling all on its own. Moon and Bá make black and white do seemingly impossible things. Even mid-century Manaus' smells seem to fill these pages: fish, engine exhaust, garbage, flowers, roasting meat, mud, mold, perfume.

The duo is particularly deft in handling scale. Crowd scenes can seem almost minimalist, with detail abandoned in favor of pattern and motion. Close-ups of characters, meanwhile, pulse with specificity, but the two types of panels mesh effortlessly.

They stumble a bit in their depictions of Zana, whose fixation on Omar is the heart of the book. Moon and Bá just don't quite do Zana's hysteria justice. When she's in the grip of her love, her face should be wracked, near-bestial. Instead it's pathetic.

Maybe the illustrators want to give Zana shades of gray that aren't there. Certainly, they manage to capture many such shades throughout the rest of the narrative — as well as a world of implied color, scent and sound. They don't seem to be interpreting Hatoum so much as carrying his tale forward into a new realm of understanding. It's a realm that's anything but black-and-white.