Accessibility links
What To Watch At Tonight's Debate: Could Be 'Make Or Break' For Jeb Bush The former Florida governor will again be feeling the heat. Marco Rubio will try to capitalize on his breakout performance from last time. And Ben Carson could fend off questions about his biography.

What To Watch At Tonight's Debate: Could Be 'Make Or Break' For Jeb Bush

What To Watch At Tonight's Debate: Could Be 'Make Or Break' For Jeb Bush 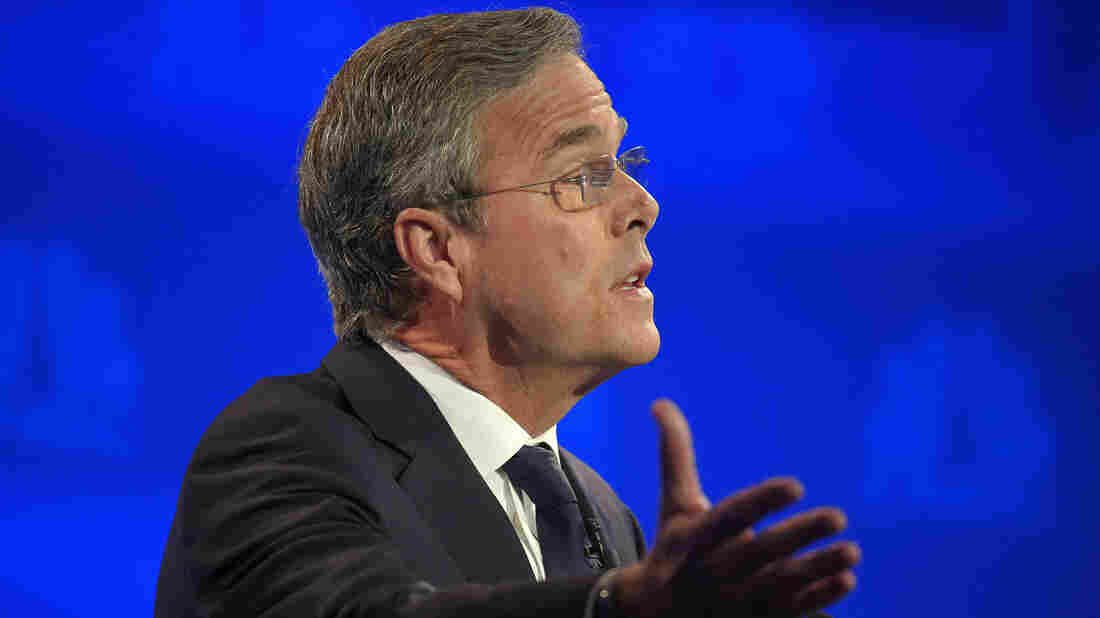 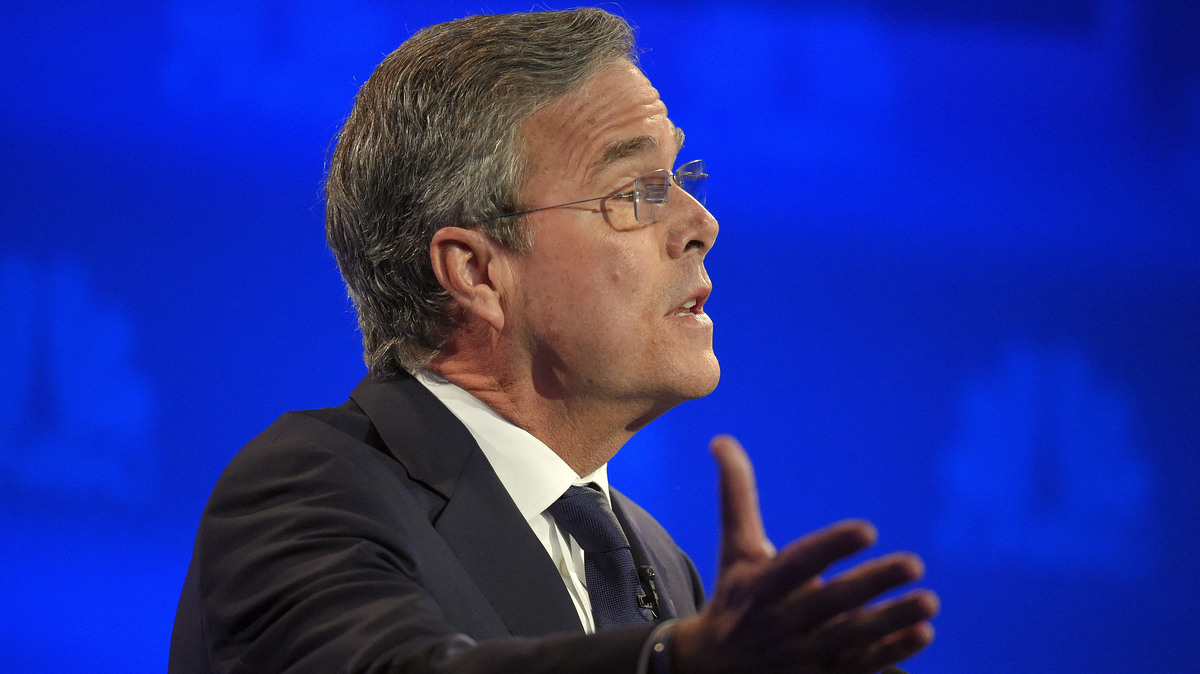 Former Florida Gov. Jeb Bush will be feeling the heat again in Tuesday evening's debate as he tries to rebound from a disappointing performance last month that renewed questions about his viability.

"I think there's going to be a lot of pressure on Jeb," predicted Katie Packer Gage, who was Mitt Romney's deputy campaign manager in 2012. "He put some pressure on himself by telling people he's going to get better and work on his debate performance. I think this is kind of a make-or-break moment for him to really step up what he's been able to do in previous debates."

The one-time favorite is now fifth on stage and is again beside fellow Floridian Marco Rubio. The young senator came out on top of a scuffle with Bush in the last debate, and Rubio will again be looking to capitalize.

The fourth Republican debate also comes as the current leaders of the pack, Donald Trump and Ben Carson, have been under new pressures. The wealthy real-estate magnate has slipped in early state and national polls, ceding first place to the retired neurosurgeon with a loyal conservative following. And key parts of Carson's biography and past have gotten the kind of scrutiny expected for someone leading in the polls. Carson is generally mild-mannered but grew animated as questions mounted in a news conference Friday. Which Carson will show up when questions are asked at this debate?

The debate, taking place in Milwaukee, Wis., is also the smallest so far. Just eight candidates made the cut for the main stage, the first time there will be fewer than 10 candidates in a prime-time GOP debate this year. Four hopefuls are relegated to the earlier undercard debate, demotions for both New Jersey Gov. Chris Christie and former Arkansas Gov. Mike Huckabee.

Fox Business Channel moderators Neil Cavuto and Maria Bartiromo have pledged to keep the debate on track, unlike last month's much-panned CNBC debate. The main topic is supposed to be the economy, but in debates, other topics always come up. The main debate will take place from 9 to 11 p.m. ET, while the undercard debate begins at 7 p.m. ET.

Here's a look at what each candidate needs to do and to avoid on Tuesday evening:

Need: Show the kind of energy he had in the summer to regain the spotlight, and stand out from rivals to reassert himself; he also needs to show a grasp of economic issues, which should be his strongest policy point

Avoid: Fading into the background and being overshadowed by someone like Rubio

At last month's debate, the boisterous former reality TV star was almost a nonfactor. After dominating previous meetings, he talked the fourth most and was completely absent from long stretches. It was the second debate in which Trump didn't seem to be having the kind of fun he had earlier in the campaign.

Fox Business's promise that candidates will get more equal time should help some. But with Trump starting to taper off, he has to show why he's the best candidate to jump-start the economy. It should be in his wheelhouse with a GOP audience.

"You're beginning to see the first cracks in the veneer," said Bruce Haynes, a GOP strategist and president of the bipartisan firm Purple Strategies. "It feels like his campaign has lost its momentum, and people are wondering if this is the beginning of the inevitable backslide."

Need: Be at ease on the stage and show a policy depth, especially on economic problems, that so far he has lacked

Avoid: Getting rattled and defensive, especially when it comes to his biography 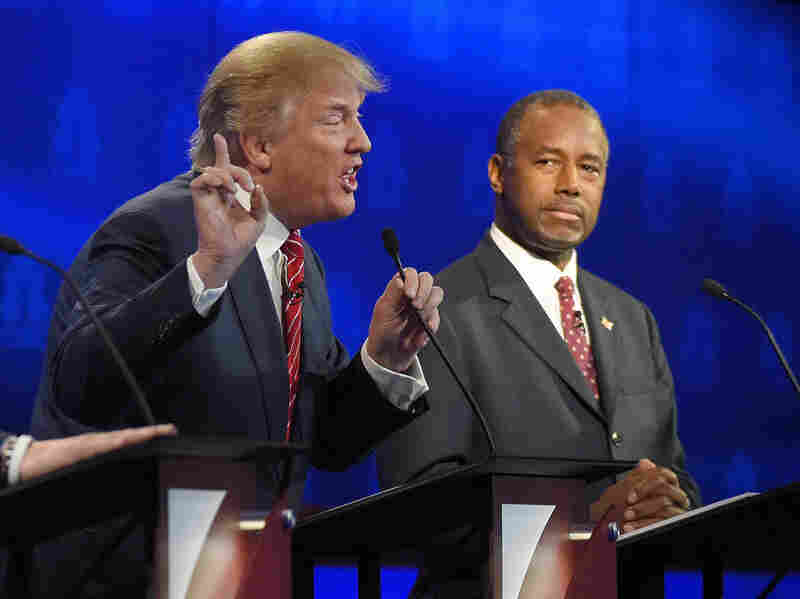 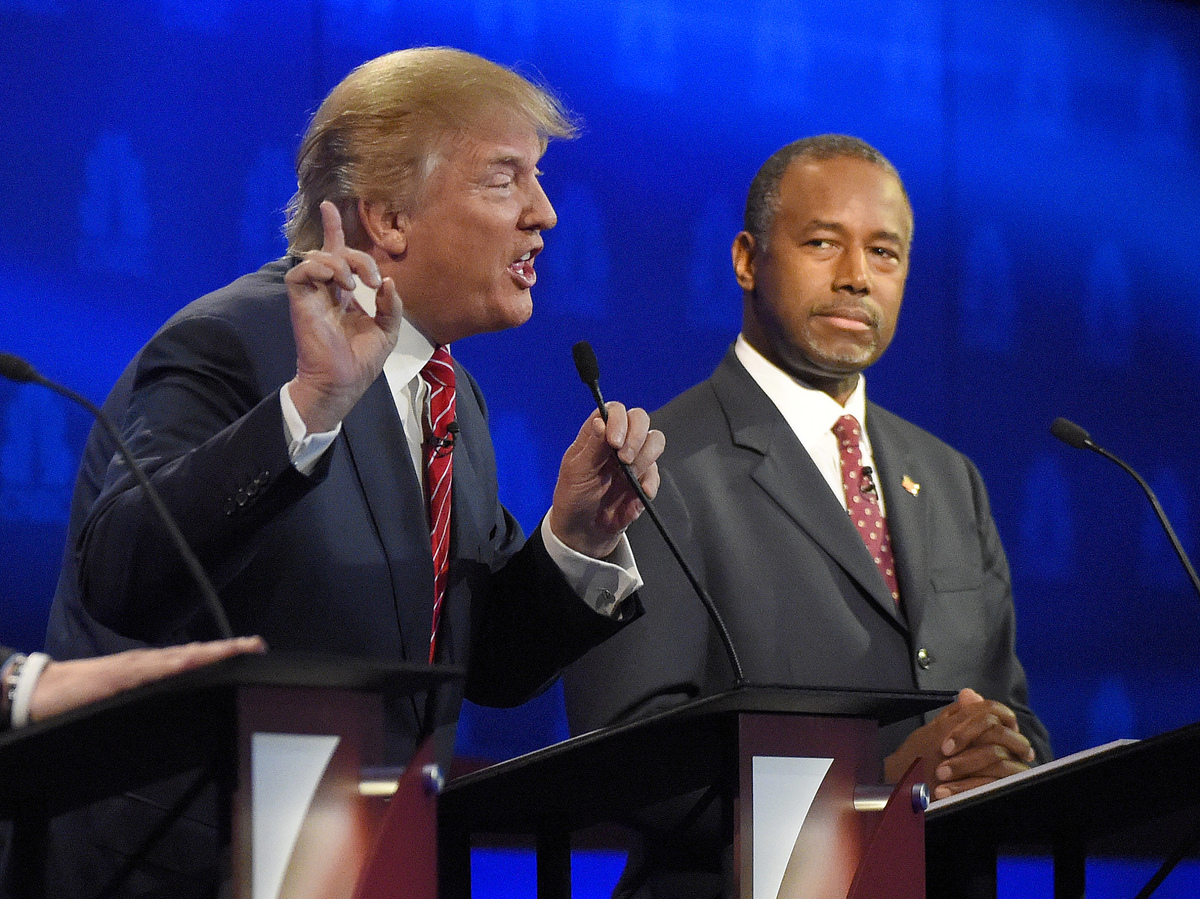 Carson didn't have a memorable debate last time, either, but it didn't seem to matter. He's overtaken Trump in some polls, largely thanks to conservative, evangelical voters. But the political novice is learning the hard way that with that new spotlight comes new pressures. Both the media and his fellow rivals, mainly Trump, have tried to poke holes in critical pieces of his biography. A weekend story raised questions about his claim that he had gotten a scholarship to West Point, and there are inconsistencies in other parts of his background.

"I sense that there's a little bit of blood in the water in terms of his biographical story," Gage said. "So far, his modus operandi has been to just blame the media, but there are some legitimate questions there."

Carson will likely be helped by the fact that Christie and Huckabee are off the stage. In addition to Trump, they have been the most critical of Carson's biographical explanations.

Need: Build on his last strong debate performance; handle questions about his personal finances and credit cards in a credible, nondefensive way

Avoid: Looking overconfident, dismissive or defensive; any stumbles that could cast doubt about his ability

Expectations are high for Rubio after his last performance. Another strong showing could help catapult him even farther.

"This is Marco Rubio's moment," Haynes said. "He's passed Jeb in the traditional candidate lane, and as Trump has seemed to stall and Carson is losing control of his narrative, this is Marco's time to go on offense and demonstrate why he should be the front-runner."

His use of state Republican Party credit cards for personal expenses during his time in the Florida Legislature has come under a microscope, but there was no smoking gun once he released the records over the weekend. And after Rubio came out on top when Bush tried to criticize him last time, Haynes warned, "I'd think twice about attacking Marco Rubio on something he can see coming."

All that said, when the bar is that high, it's easy to stumble.

Need: Show up and look like a candidate who could win the nomination; claim the conservative mantle on the economy

Avoid: Ceding the stage again to Trump, Carson and Rubio

If Carson or Trump fade, Cruz is seen as the next likely to rise. He's got the message discipline, and is well-liked by evangelicals, Tea Party supporters and libertarians. He has the organization in early states. He has also seen his stock rise after last month's debate, in which he took the lead in criticizing CNBC moderators over their line of questioning.

But the Texas senator has yet to close the gap to either Trump or Carson. He's also been hesitant to go on the attack against either, but may need to get more forceful soon in order to draw contrasts. He's the only one of them with legislative and political experience, but can still viably claim an outsider mantra.

"Politics is about choices, and it's about comparison," Haynes said. "We'll see if he's ready to draw some comparisons yet."

Need: Look like the candidate establishment donors thought they were getting; he also needs to explain why his Florida record is the best on the economy

Avoid: Getting into fights with rivals he can't win; if he swings, he had better land it

No one has more at stake at this debate. If he turns in a strong performance, it could go a long way to quieting nervous donors, whom he called "nervous nellies" who need to "chill out." He needs to quell concerns about his campaign's viability. Bush himself has acknowledged that debating isn't his strong suit and said "performance" isn't what matters. But in politics, performance very much matters.

The economy has been Bush's central campaign message, but it's one he has struggled to convey to GOP primary voters because of missteps and missed hits. He unveiled a new campaign slogan — "Jeb Can Fix It." He had better fix it tonight if he wants to continue.

Need: Show some energy and spontaneity and remind GOP voters why she was a breakout star of earlier debates

Avoid: Rote talking points in responses; any missteps over her time at Hewlett-Packard

The former CEO's political stock rose after she turned in two strong performances, first in the undercard debate that catapulted her to the main stage. But she didn't fully capitalize on those performances. Even though she spoke the most at the last debate, she didn't have the kind of memorable moments she'd had previously. Her campaign was unable to convert that early momentum into better numbers.

"She needs to have another performance like the last couple," Gage said, "and she and her team need to figure out how to capitalize on it — or she does risk getting lost in the shuffle."

Need: Show why they belong in the top tier

Kentucky Sen. Paul and Ohio Gov. Kasich survived the first purge of the debate stage. Now, they've got to prove they belong there. Fewer candidates may give them more of an opportunity to go toe-to-toe with their top-tier rivals. They'll need to capitalize on every opportunity, or next time they may not be in prime-time.

Kasich seemed to be on his way to a good debate last time, but he faded after a Donald Trump comeback on Ohio's record and Kasich's tenure at Lehman Brothers.

Paul's politics, especially when it comes to foreign policy and surveillance, appear out of the GOP mainstream. He has struggled with his minimal-intervention message regarding the rise of the Islamic State militant group. At this point, he not only doesn't look like a plausible nominee, he doesn't even look like he can live up to what his father, Ron, did as a presidential candidate. 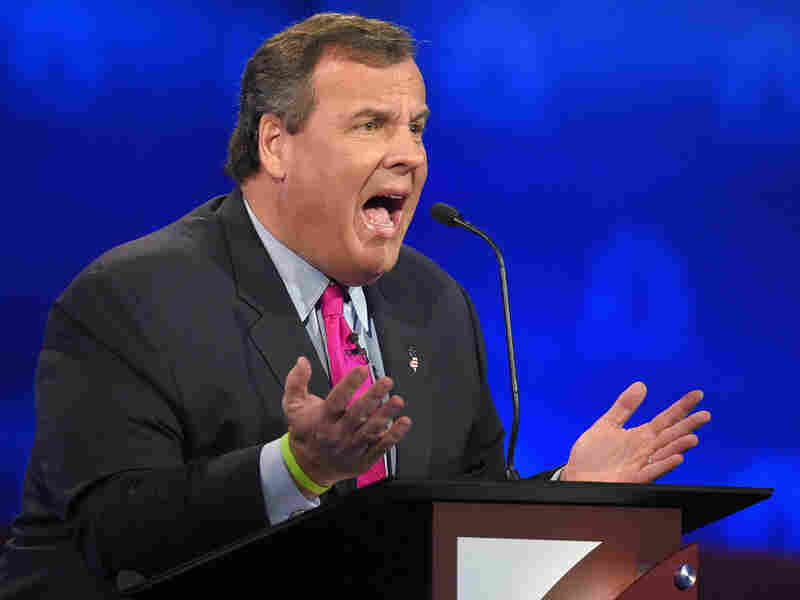 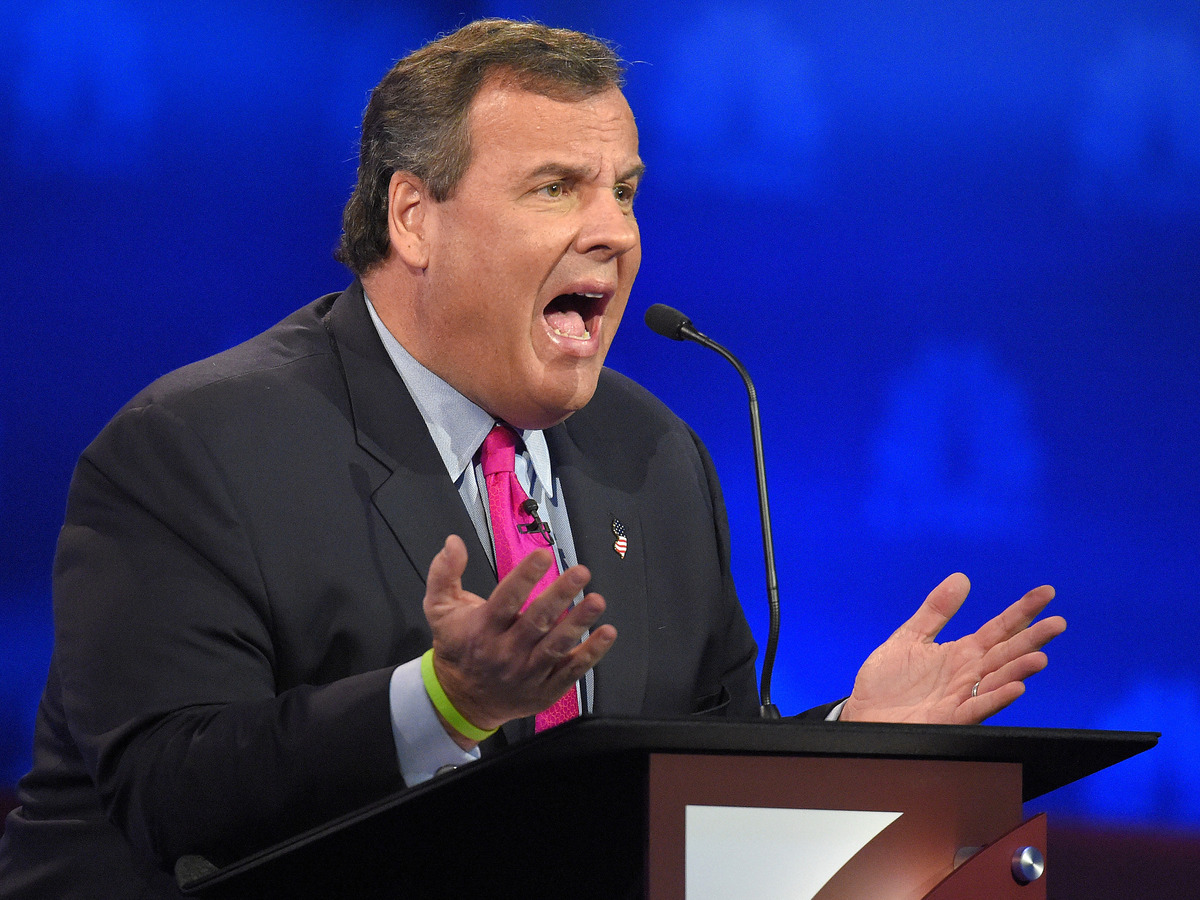 New Jersey Gov. Chris Christie will try to have a breakout moment from the undercard debate stage on Tuesday night.

For Christie, who was just starting to get some momentum after the last debate, the exclusion was particularly hard, and some of his rivals have even said he should have been on the main stage. The potential silver lining: Gage said the exclusion could be a blessing in disguise, if he seizes the opportunity.

"Christie is going to be looking to have a breakout performance and use the undercard debate that has a lot fewer participation — and a little less drama — to shine and get some attention that he hasn't really been able to get in the later debates," she predicted.

At least, he hopes so. "Christie should be a force of nature in that crowd," Haynes said, "and done properly it could be a real springboard for him."

That said, if he doesn't stand out, that could be a major problem for his candidacy.

The other candidates haven't been able to break out of the lower debate. And for Santorum, who has always been a good debater, it could be even harder to be heard — he said Monday he's battling a case of "severe laryngitis."