Accessibility links
Before Bright Lights And Rapid Fire, There Was 1948 And One Question The first presidential debate broadcast lasted one hour, and was broadcast without commercial interruption. Dewey and Stassen debated whether the Communist Party in the U.S. should be outlawed. 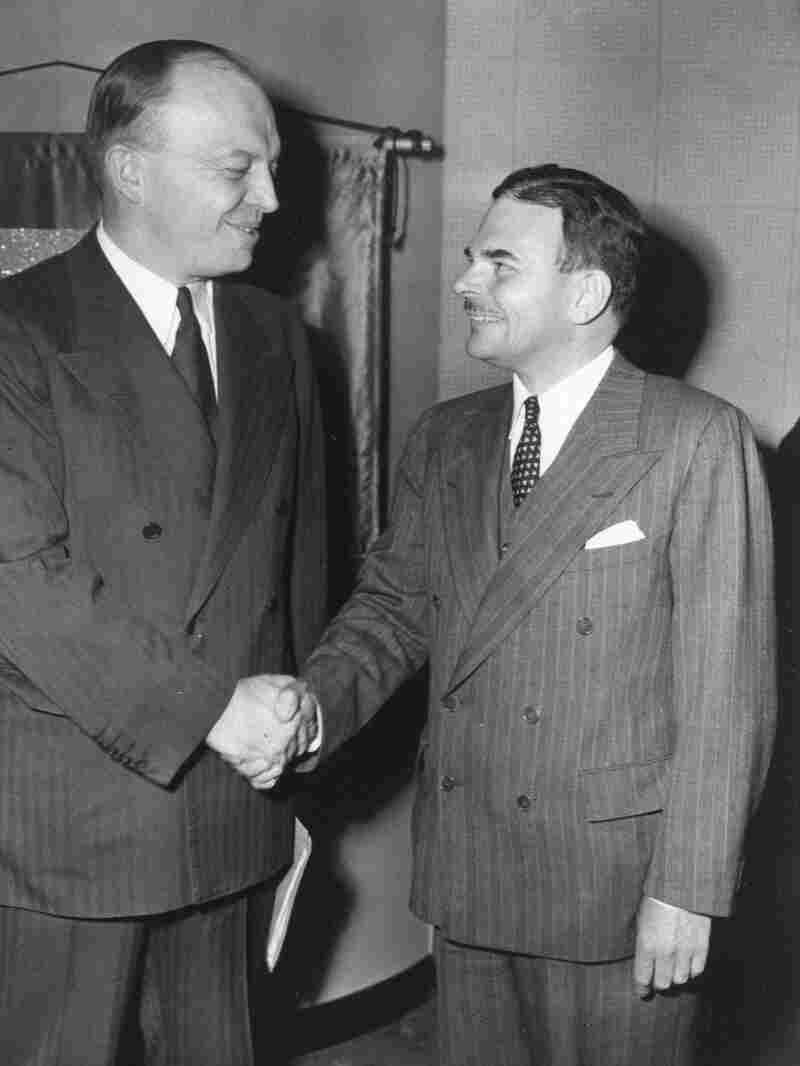 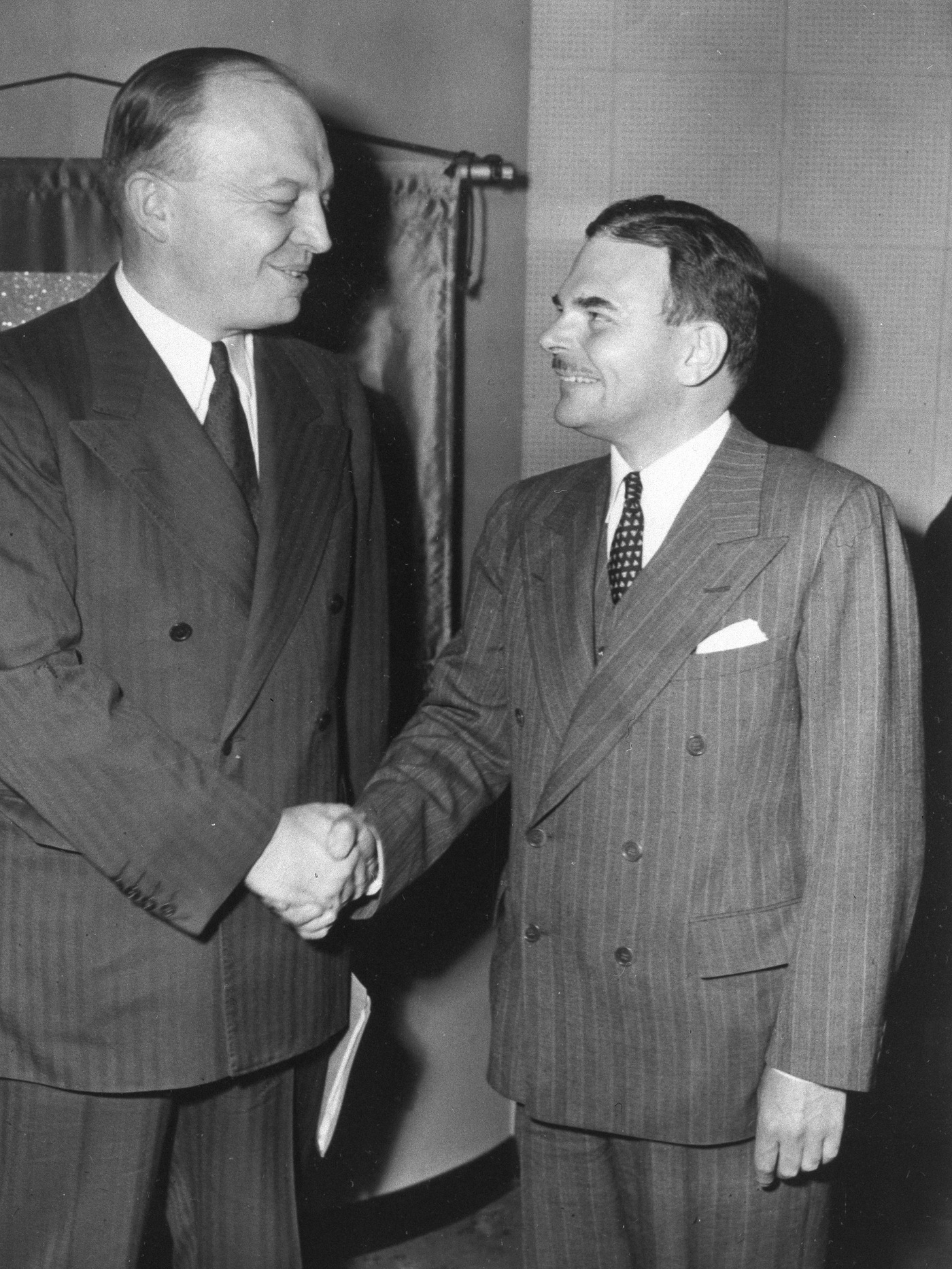 It is common knowledge that televised debates between presidential candidates began with Richard Nixon and John F. Kennedy in the fall of 1960. But few remember that the very first debate to be broadcast featuring White House hopefuls happened a dozen years earlier, and it happened on radio.

The year was 1948, and the candidates were seeking the Republican nomination against incumbent President Harry Truman: Thomas Dewey, governor of New York, and Harold Stassen, the former governor of Minnesota who had left office for Navy duty in World War II.

Dewey had been the GOP nominee four years earlier, but Stassen had been winning primaries — Pennsylvania, West Virginia, Wisconsin and Nebraska — and was leading in some polls. Dewey needed to win the late primary in Oregon to show he had voter appeal in the West.

The topic was one of compelling interest in the postwar years — one that still has relevance in America today: the best way to deal with a foreign and threatening ideology. In 1948, that ideology was communism. It was the year the Communist Party took over in China, and in Czechoslovakia, as it already had in the rest of Eastern Europe. The Soviet Union cast a long shadow across much of the world. In America, leftists of all kinds were being accused of being agents of Moscow.

Both Dewey and Stassen were both traditional Republicans and staunch anti-communists. But they disagreed on the proper response to communist activity inside the U.S. So on this night they debated this question: Should the Communist Party in the United States be outlawed?

The debate took place on May 17 at Portland, Ore., radio station KEX. More than 50 reporters were present, watching from behind a glass wall. But far more importantly, the debate was carried by three of the four national radio networks, and the audience was estimated at 40 million. That would be the equivalent of 80 million or more today. And the hour aired without commercial interruption.

If we are to have the best chance to win through for freedom without the horror of a third world war, the free countries must take action to protect themselves in this unsettled period that has become a Cold War.

Just as notable as the single-issue subject matter was the debate format. Each man spoke for 20 minutes, then each had about eight minutes for a rebuttal. That was it. No cross-examination. No questions from the moderator or the journalists. And, needless to say, no questions from Twitter or Skype.

Stassen kicked off for the affirmative side, making the case for outlawing the party: "If we are to have the best chance to win ... for freedom without the horror of a third world war, the free countries must take action to protect themselves in this unsettled period that has become a Cold War."

Americans were just getting used to the phrase "Cold War" at that time.

My interest is in preserving this country from being destroyed by the development of an underground organization which would grow so colossally in strength — were it outlawed — that it might easily destroy our country and cause us to draft all of the young men in the nation.

"There is now no law in America to prevent these Communist organizations from secretly developing organizations of hidden members, from carrying on secret conspiracies to promote strikes, to stir up hatred between races and religions in America, and from following their directions from Moscow," he said.

Anticipating the argument that the government should not attempt to regulate ideologies, Stassen drew a distinction between thoughts and deeds: "Such a law would not outlaw ideas or thoughts, it would be make illegal conspiracies of this kind."

Twenty minutes' worth of argument on one side of a question can construct a case all but impervious to attack. But Dewey was well-prepared. He had made the case many times before that the best way to kill the communist idea was with better ideas — not with suppression. Letting the communists take part in normal politics would force them out into the open, Dewey said, where they could be discredited. Outlawing communists would send them into the shadows and make them far more dangerous.

"My interest," Dewey intoned, his voice rising with urgency, "is in preserving this country from being destroyed by the development of an underground organization which would grow so colossally in strength — were it outlawed — that it might easily destroy our country and cause us to draft all of the young men in the nation."

But Dewey also had a tactical advantage that would turn the debate in his favor, converting much of Stassen's case to Dewey's own advantage.

Stassen had endorsed a bill then before Congress sponsored by Rep. Richard Nixon of California and Rep. Karl Mundt of South Dakota. Stassen wanted to support the bill, which was popular among the hard-liners he was trying to court. Stassen said it would effectively make communist participation in politics impossible by banning anyone favoring the overthrow of the U.S. government on behalf of a foreign power.

But the bill did not actually ban the communists by name. And its authors and supporters, sensitive to the Constitutional issues at stake, had said many times that it was not meant to outlaw the Communist Party.

Stassen struggled on the point. In his rebuttal period he cast the Mundt-Nixon bill as being tantamount to outlawing what the communists were actually up to. "Obviously," he said, "you cannot and should not draft your law in such form that a mere name results in an outlawing."

Stassen said the key point was to ban conspiracy or activity "being directed by a foreign power, for the purpose of undermining American liberty and overthrowing our government."

Dewey allowed that the two men were both willing to accept the Mundt-Nixon bill, and were only disagreeing about its effect.

"The authors of the bill say that the bill does not outlaw Communist Party, so now if Mr. Stassen says [this bill] is all he wants, then he's completely surrendered. He's willing to settle for a law that the authors say doesn't outlaw the party, which of course it doesn't."

Dewey then ticked off 27 laws already on the books that he said could be used to fight any plots or conspiracies aimed at forceful overthrow of the government or covert service for a foreign government. It was a list of anti-sedition and anti-dissent statutes certain to raise the hair on civil libertarians. But it also made the point that there were already laws on the books.

"The Mundt bill is probably harmless," said Dewey near the debate's conclusion. "It may have the virtue of keeping [communists] out in the open. That is a very good provision of law. The other parts of it, if they're constitutional, are probably swell." 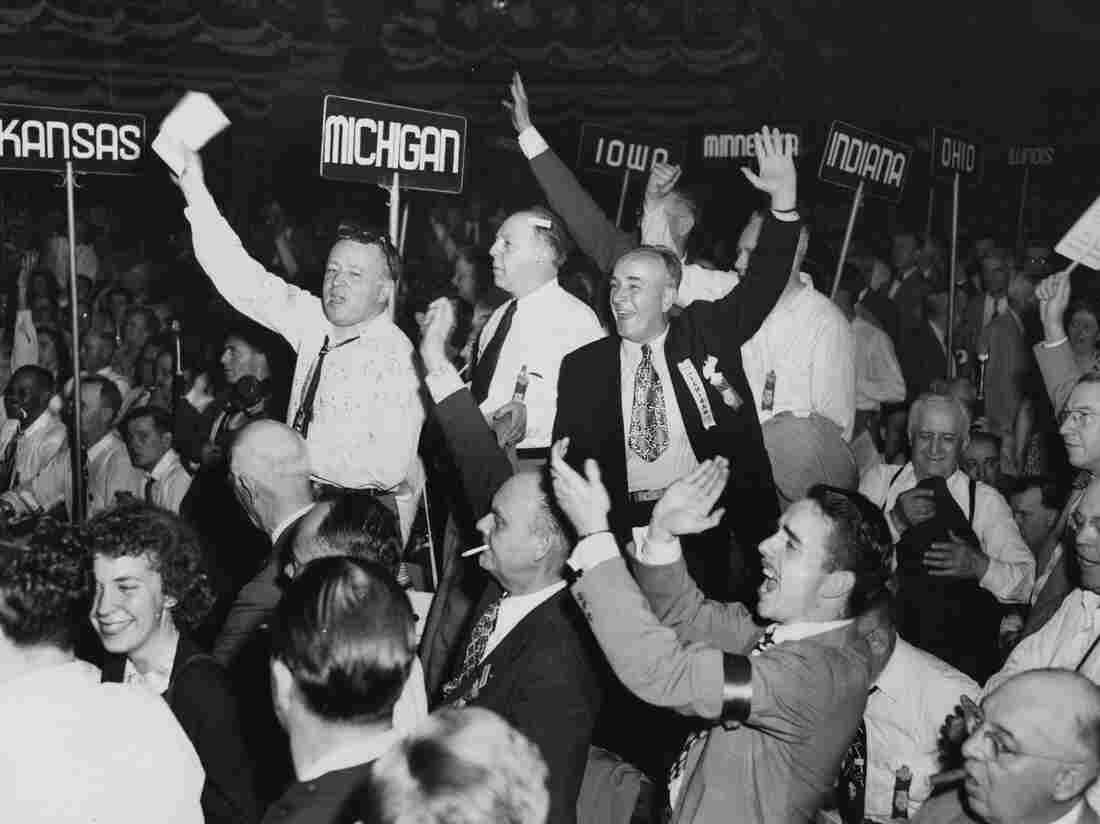 Members of the Michigan delegation at the Republican National Convention in Philadelphia jump to their feet and cheer as Thomas Dewey's landslide victory as Republican nominee for president is announced. Al Gretz/Getty Images hide caption 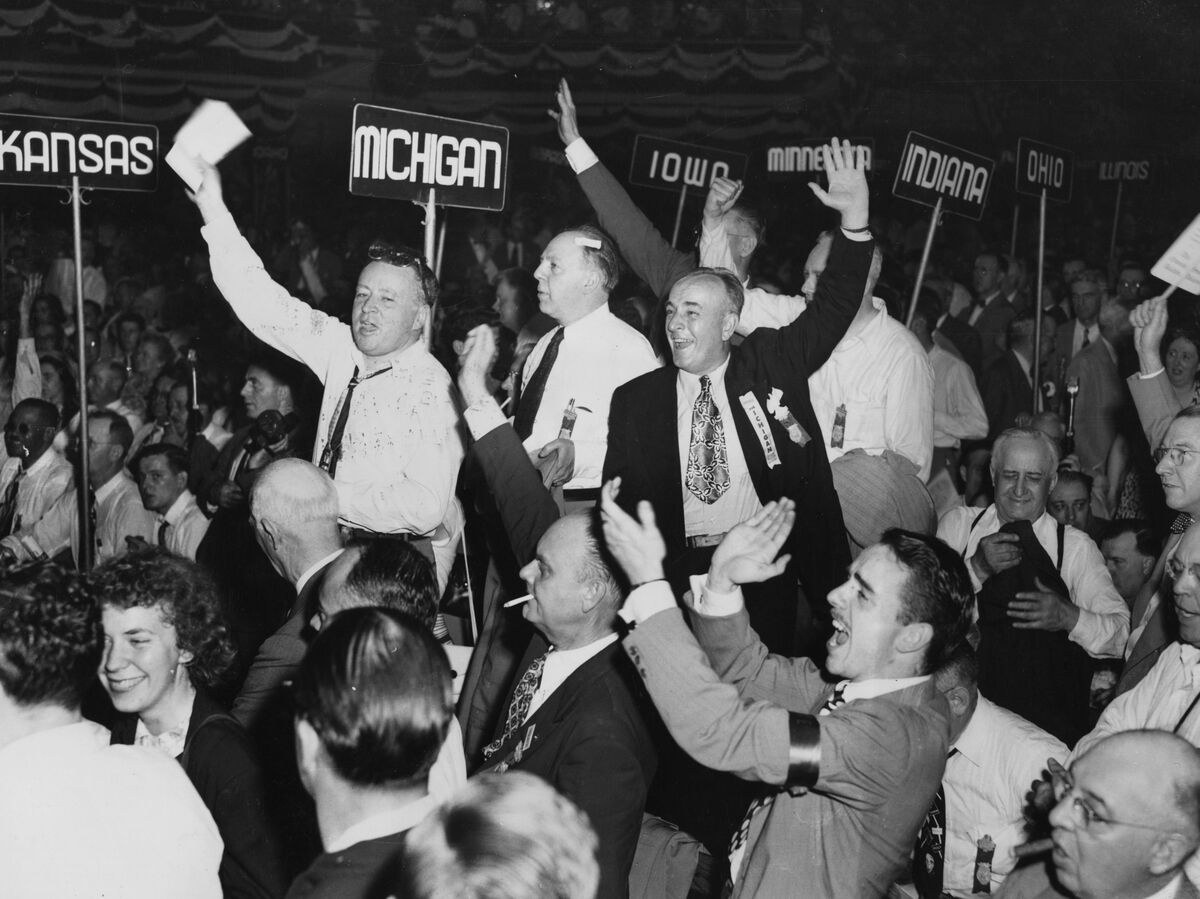 Members of the Michigan delegation at the Republican National Convention in Philadelphia jump to their feet and cheer as Thomas Dewey's landslide victory as Republican nominee for president is announced.

In the aftermath, the governor of New York was widely viewed as having had the better of the exchange. Not coincidentally, he won the Oregon primary four days later with 52 percent of the vote over Stassen's 48 percent. That was enough to stop Stassen's spring boomlet and deliver the nomination to Dewey at that summer's GOP convention.

The national audience for the debate may also have contributed to the general sense of Dewey as the man of the hour, all but certain to reclaim the presidency for the GOP after 16 years of Democratic control.

It did not work out that way, of course, and Dewey is remembered today largely for a famous picture of Truman laughing at a newspaper with the mistaken headline "DEWEY DEFEATS TRUMAN."

The New Yorker did carry Oregon that fall, one of just five states he won west of the Mississippi River. He won a third term as governor of New York in 1950, then retired from public life to practice law and participate in politics as an adviser and power broker. He was said to have declined the offer of a seat on the U.S. Supreme Court. He died in 1971 at age 68.

Stassen, who had been elected governor of Minnesota at the age of 31, was still just 41 at the time of his debate with Dewey. He became president of the University of Pennsylvania later that same year and subsequently served in the administration of Dwight Eisenhower. He would officially enter the lists as a candidate for president again in 1952 and six times thereafter — including in 1992 at the age of 84. He died in 2001 at age 93.