Accessibility links
Push For $15 Minimum Wage Becoming Part Of Presidential Politics In dozens of cities, low-wage workers, backed by a key union, held demonstrations demanding a minimum wage of $15. They planned to protest in Milwaukee outside the Republican presidential debate. 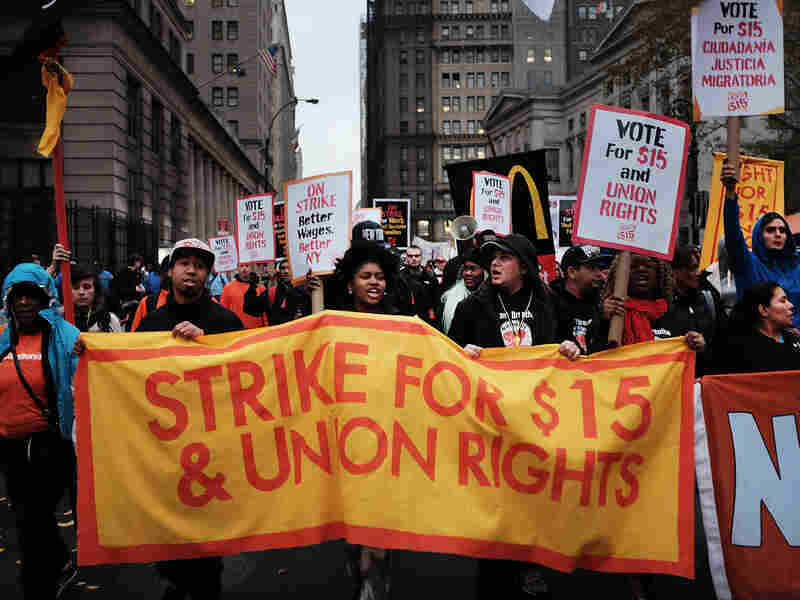 Low-wage workers and supporters protest for a $15 an hour minimum wage Tuesday in New York City as part of what organizers called a National Day of Action. Spencer Platt/Getty Images hide caption 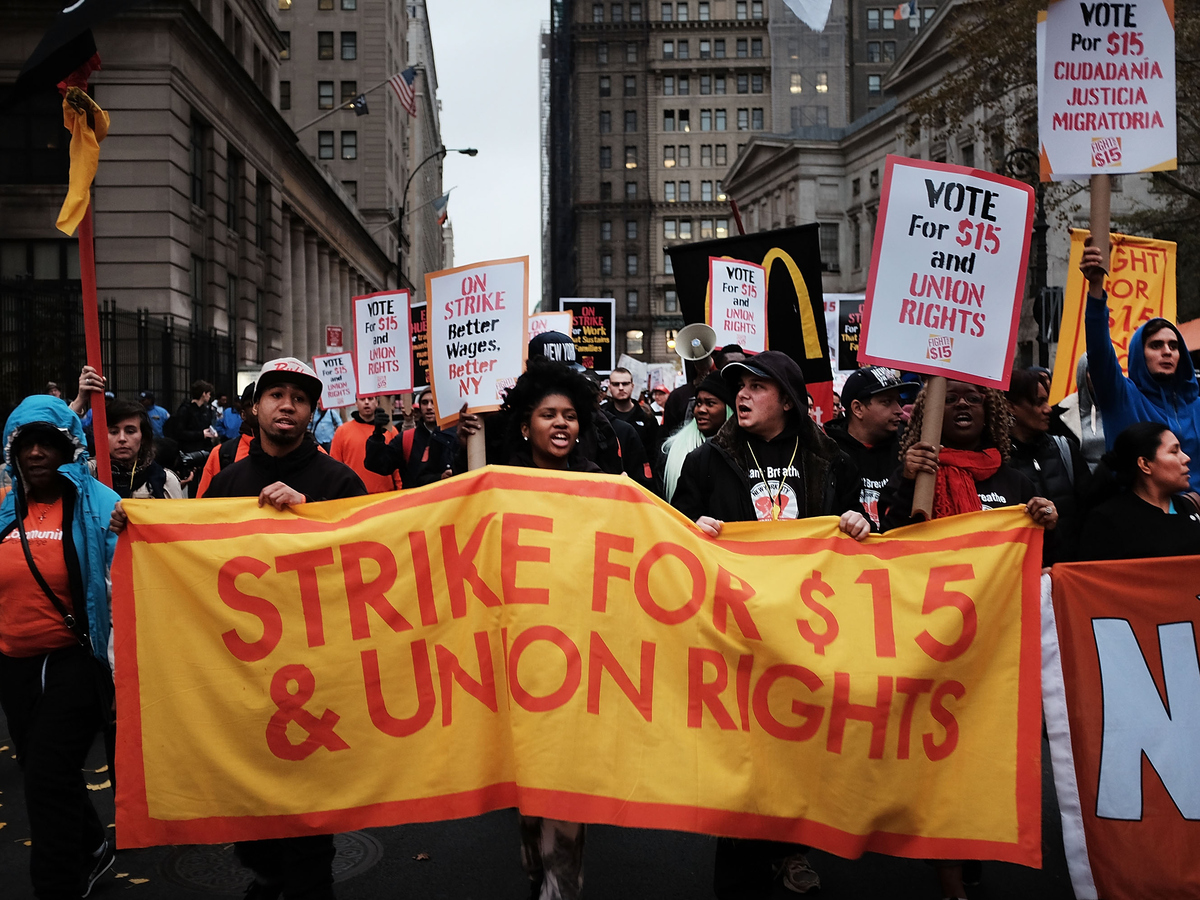 Low-wage workers and supporters protest for a $15 an hour minimum wage Tuesday in New York City as part of what organizers called a National Day of Action.

Others are simple, like the federal minimum wage. A bill to raise the $7.25 hourly wage covers a few paragraphs.

The congressional response is simple, too: Democrats are for it; Republicans against.

Tonight, that political contrast will be highlighted by fast-food workers who plan to protest at the Republican presidential debate in Milwaukee. They want the federal minimum wage boosted to $15.

Spurred on by the Service Employees International Union, the Milwaukee demonstrators will wrap up a day of protests held around the country. Over the past three years, fast-food workers have held walkouts and rallies, directing their wage demands at employers. This time, much of the focus was on city halls and other political sites, such as the Republican debate.

"Candidates gearing up for the 2016 elections across the country should take note," Christine Owens, executive director of the National Employment Law Project, said in a statement supporting the "Fight for $15" protests.

In response to the protests, the Employment Policies Institute, backed by the restaurant industry, ran a full-page ad in the New York Post. The ad highlighted results from a survey, conducted for the group by the University of New Hampshire Survey Center, which showed that three-fourths of the surveyed economists say a $15 minimum wage would reduce the number of jobs available, particularly for younger and less experienced workers.

Congress last raised the federal minimum wage in 2009. Since then, 29 states, plus the District of Columbia, have approved minimums above $7.25. State laws have typically pushed up wages to between $8 and $9 an hour. But some cities have gone much further. For example, Seattle and San Francisco have put wages on track to hit $15 an hour.

For years, President Obama has been calling for a phased-in higher federal minimum, but congressional Republicans have been fiercely opposed to such a move.

Now, as the fight moves into the presidential election cycle, candidates generally have been falling into line with their party's position.

I stand with the thousands of workers on strike today to demand $15 and a union. #FightFor15

New York Gov. Andrew Cuomo, a Democrat, is pushing the matter, with plans to use his executive authority to raise the minimum wage to $15 by the end of 2018 for all state workers. That would mark the first time a state has set such a high wage for so many public employees.

In Congress, Republicans have presented a nearly solid wall of opposition to federal involvement in wage hikes. Overwhelmingly, Republican presidential candidates have agreed.

GOP presidential candidate Donald Trump, when asked recently on MSNBC's Morning Joe if he supported a higher minimum wage, said: "It's such a nasty question, because the answer has to be nasty."

Trump said that because the United States must compete with low-wage countries, "I think having a low minimum wage is not a bad thing for this country."

Perhaps the greatest divergence from the party line has come from Ben Carson, a retired neurosurgeon who has led in recent polls. In a CNBC interview last spring, he said of the minimum wage, "I think, probably, it should be higher than now."

Justin Murden, 20, a low-wage worker in Philadelphia, said in a phone interview that he is protesting at a McDonald's restaurant Tuesday evening — and planning to pay more attention to politics in the coming year.

He makes less than $9 an hour as a cleaner and a security guard — and got involved with the demonstrations after a canvasser told him about it.

"This motivates me to actually listen to who is saying what when they run for mayor or city council or president," he said. "Now, I understand more."