Accessibility links
In Los Angeles, Piecing Together The Numbers On Police Shootings Reliable data has been missing from the national debate. That's changing. An analysis by NPR member station KPCC found that from 2010 to 2014, 375 people were shot — and no officers were prosecuted. 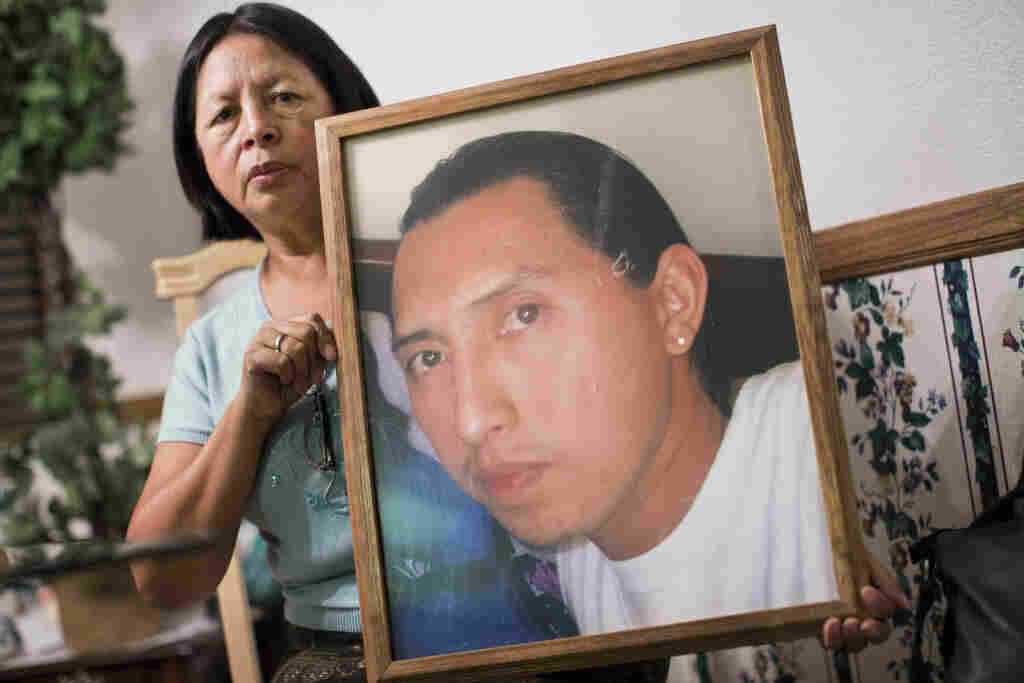 Carmen Cobian holds a photograph of her son, 26-year-old Christian Cobian, who was shot and killed by Los Angeles County Sheriff's deputies in January 2012. Cobian is among the 375 people shot by on-duty police officers between 2010 and 2014 in Los Angeles County. Maya Sugarman/KPCC hide caption 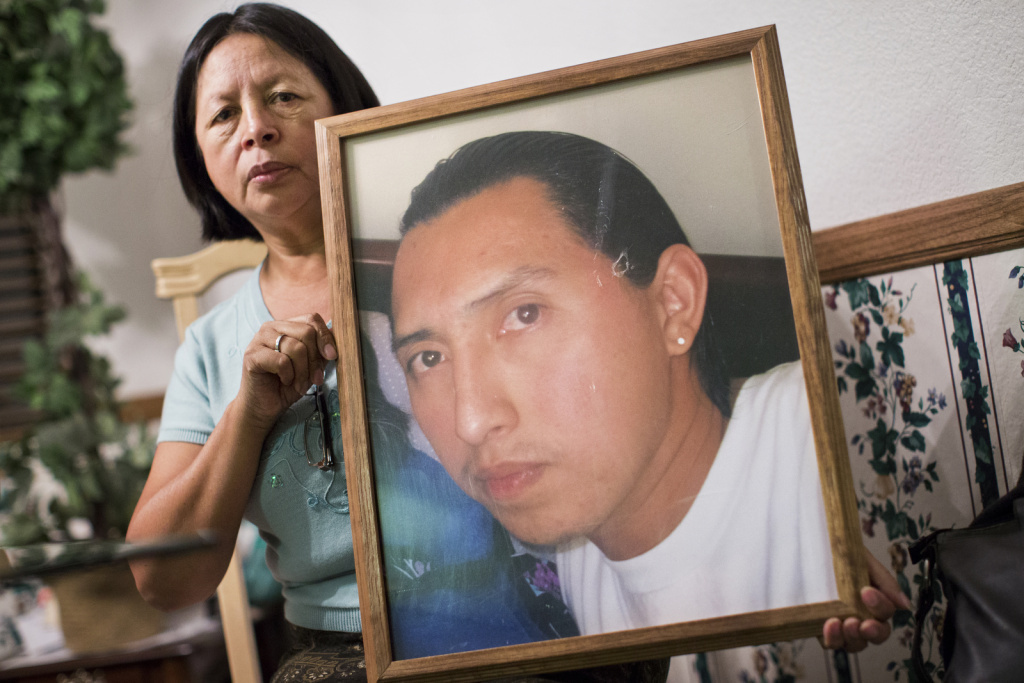 Carmen Cobian holds a photograph of her son, 26-year-old Christian Cobian, who was shot and killed by Los Angeles County Sheriff's deputies in January 2012. Cobian is among the 375 people shot by on-duty police officers between 2010 and 2014 in Los Angeles County.

The official statistics for shootings by police in America are bad to non-existent. The totals are under-reported, and the Justice Department admits it doesn't have crucial details such as the race of people shot, and whether they were armed.

Since the 2014 protests in Ferguson, Mo., after the police killing of Michael Brown, this lack has become an embarrassment. But that's slowly beginning to change. 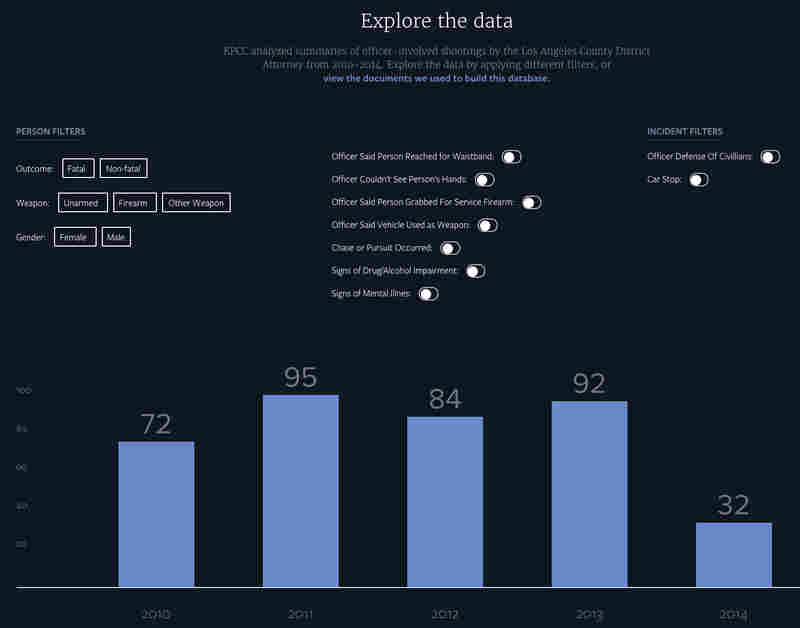 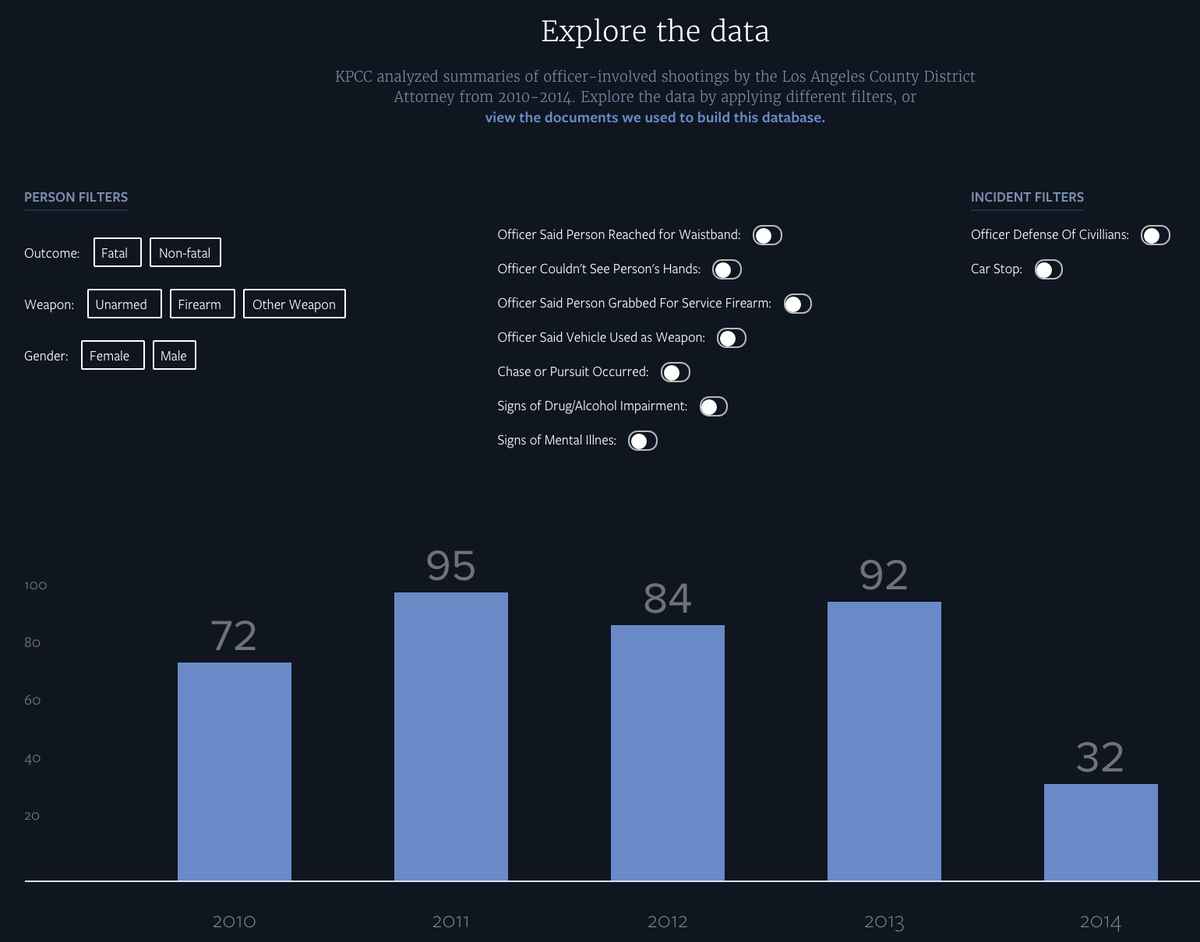 Take, for instance, the nation's second-largest metro area, where NPR member station KPCC in Pasadena, Calif., has created a database of shootings by law enforcement officers in Los Angeles County from 2010 to 2014.

During those five years, KPCC found, police shot 375 people; no officers were prosecuted. Of the people shot, about one in four was unarmed. And 24 percent of those shot and killed were black, while African-Americans make up 8 percent of the L.A. County population.

The dataset also includes a breakdown of factors such as the justifications given by police who shoot suspects.

For instance, 148 people were shot for moving their hands out of sight or reaching for their waistbands; of those, 47 turned out to be unarmed.

When Is Use Of Force Justified?

Whether that proportion seems high is up for debate. As KPCC's reporting about those shootings puts it:

'If they were shooting all the suspects that reach or don't show their hands when the officer wants them to,' he said, 'I can't imagine the number of police shootings – if the public thinks there's a high number now – I can't imagine what there would be.'

'There is nothing that requires us to actually wait and see the gun or wait to see the knife,' he said. Deputies' 'background, training and experience' with armed suspects triggers a self-protection response when a suspect's hands disappear, he said."

American police have considerable leeway in these situations because of two Supreme Court rulings in the late 1980s. In essence, the court held that officers may use deadly force if they have a reasonable belief that the suspect poses imminent danger of bodily harm to them or someone else. In addition, officers may not be judged based on information they didn't have at the moment they employed deadly force.

In fact, on Monday, the Supreme Court bolstered the protections for officers, when it ruled that an officer in Texas could not be sued for shooting into a fleeing car from a highway overpass.

Police say these standards are only fair, and without them they would live in constant fear of being second-guessed after the fact. They say if they had to worry about being prosecuted for honest mistakes or for misreading a threat, they wouldn't be able to do their job.

On the other side, groups such as Black Lives Matter say this benefit of the doubt has gone too far. They say prosecutors are too deferential to police, and overly aggressive use of force routinely gets a pass.

Missing from this debate are good numbers. The federal government has tried — and failed — to get police agencies to report details about the use of deadly force. FBI Director James Comey often complains about how little data Americans have to work with, when debating policing and race.

Even some police organizations say it's a problem; they say the current national discussion relies too much on anecdotes and high-profile incidents caught on video, and they say better statistics would create a more sympathetic view of how police use force.

The federal government isn't about to require police agencies to start reporting these numbers, but it is experimenting with the next best thing. The Bureau of Justice Statistics has a pilot program to gather detailed information about "arrest-related deaths" in America — and they're going to use "open-source data" as a basis for their statistics.

In other words, they'll draw on information that media organizations such as KPCC are collecting on police shootings. Equipped with these numbers, the BJS will then ask police agencies directly for more information on the cases that have been identified.