Accessibility links
Trump's Tirade: Comparing Carson To A Child Molester, 'Stupid' Iowans And More The real estate magnate was exasperated and unfiltered during at 95-minute speech in Iowa on Thursday evening, going hard against his main GOP rival and others. 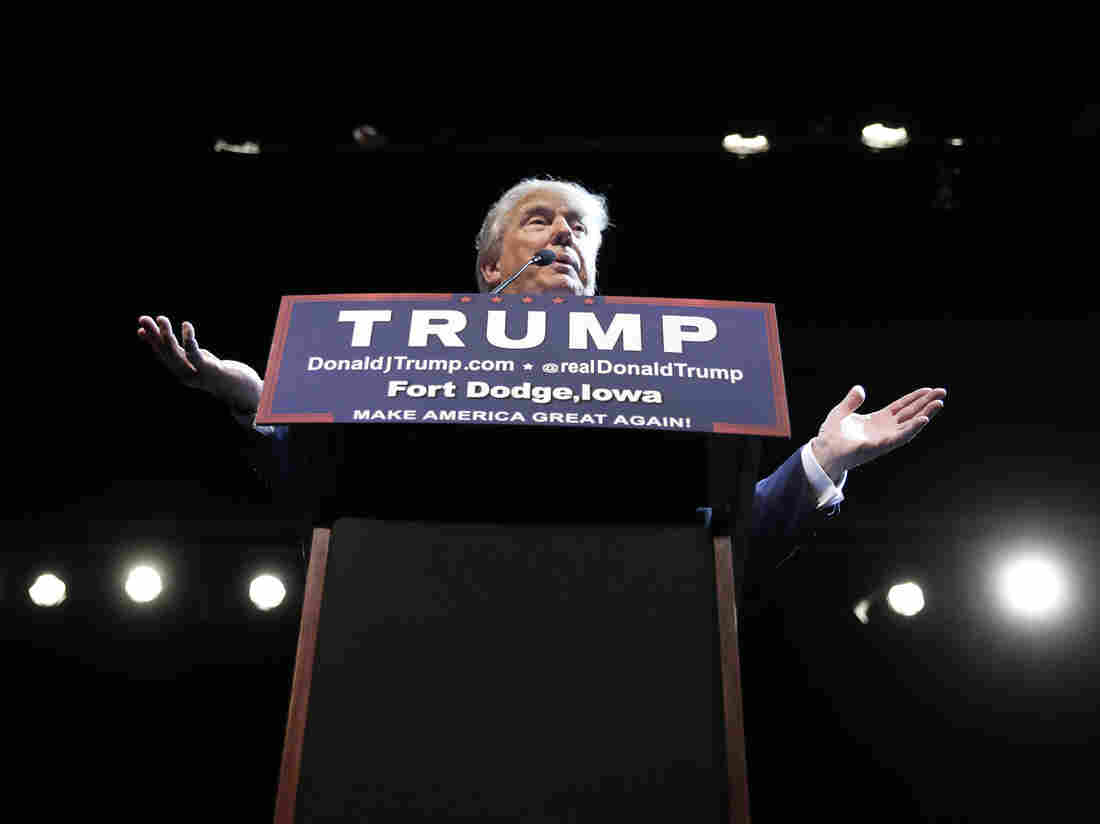 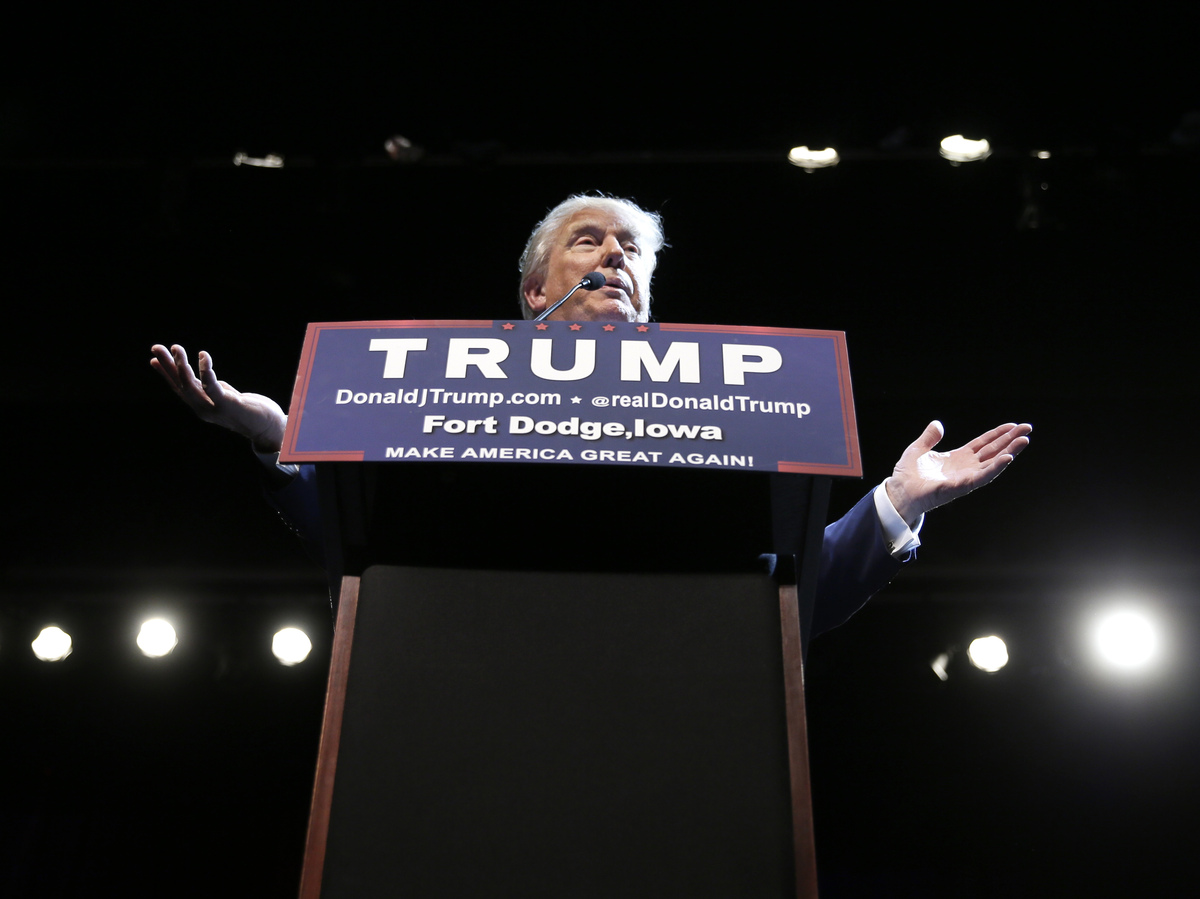 Donald Trump has had it, and he's making sure everyone knows it.

Slipping in the polls and facing an increasing threat from neurosurgeon Ben Carson and other rivals, the real estate magnate delivered a raucous speech in Fort Dodge, Iowa, on Thursday night that took plenty of pot shots but had little policy substance.

Nary a target was spared in his 95-minute tirade, described by the Washington Post — from Carson to Florida Sen. Marco Rubio to ISIS to Iowa voters themselves. He'd taken the same tack earlier that day in a combative interview with CNN's Erin Burnett.

The tenor is a change for Trump, who was mostly polite at Tuesday evening's GOP debate. While he took some jabs to belittle fellow competitors like Ohio Gov. John Kasich and former Hewlett-Packard CEO Carly Fiorina, he treated Carson, Rubio and others with kid gloves and never criticized them to their face.

But by Thursday, showing signs of weariness and growing frustration after a long day on the campaign trail, the gloves came off.

Here's who Trump jabbed at on Thursday:

The soft-spoken famous neurosurgeon has been defending key elements of his biography recently, including a story that his temper when he was young had caused him to try to stab a friend, an attempt that was stopped only by a large belt buckle.

Trump mocked that assertion Thursday night, even "stepping away from the podium to demonstrate how such an attack might happen and how his own belt buckle wouldn't stay in place long enough to stop a knife," according to the Post.

But Trump seized on Carson's own words in his autobiography that such episodes were brought on by a "pathological temper." He likened it to a pathological disease that couldn't be changed.

"If you're a child molester, there's no cure. They can't stop you. Pathological? There's no cure," Trump said.

Donald, sorry, I've got to interrupt again. You would know something about pathological. How was that meeting with...

Fiorina — whom Trump criticized for "interrupting everybody" during this week's debate, and dismissed on Thursday as "Carly whatever-the-hell-her-name-is" — came to Carson's defense.

Iowans: "How stupid" are you?

Carson's rise over Trump has been the most pronounced in Iowa, where the first votes will be held in 2 1/2 months.

And as Trump attacked his red-hot rival, he had another question for the good people of the Hawkeye State:

By the end of the speech, he appeared to have a different idea, though, floating the idea of moving to Iowa himself and buying a farm.

"I've really enjoyed being with you," Trump said. "It's sad in many ways because we're talking about so many negative topics, but in certain ways it's beautiful. It's beautiful."

It's not the first time Trump has shown exasperation with the state in which he was once the heavy front-runner. Last month, he retweeted a tweet insinuating that pesticides on corn had caused voters to go crazy; he blamed the tweet on an intern.

Even though foreign policy has never been one of Trump's strengths, he continued to boast he would be the best qualified to take on the increasing terrorist threat of ISIS.

"I would bomb the s**** out of them," Trump said of the terrorist group. "I would just bomb those suckers. And that's right: I'd blow up the pipes, I'd blow up the refineries. I would blow up every single inch. There would be nothing left."

And, never one to be humble, Trump bragged that he knows more about ISIS "than the generals do."

Trump's Iowa speech zeroed in mostly on Carson, but earlier that day in an interview with CNN he had some accusations for the rising Rubio.

Pointing back to Rubio's work on the Senate's bipartisan immigration reform bill, Trump said the senator was in favor of "amnesty" for undocumented immigrants because he is of Hispanic heritage.

What was the reaction?

Carson responded Friday, calling Trump's speech a "gratuitous attack. "Americans are concerned with "real issues," he said, not "politics of personal destruction. That's what people are sick and tired of. I'm hopeful that at some point we reach a level of maturity that we can actually deal with the issues that are facing us right now and stop getting into the mud and doing thing that really don't matter."

Even for Trump, this speech was over the top and even more unpredictable than usual. The Post described the audience reaction:

"At first, the audience was quick to laugh at Trump's sharp insults and applaud his calls to better care for veterans, replace the Affordable Care Act and construct a wall along the Mexican border. But as the speech dragged on, the applause came less often and grew softer. As Trump attacked Carson using deeply personal language, the audience grew quiet, a few shaking their heads. A man sitting in the back of the auditorium loudly gasped."

And NBC captured this moment:

"As they left, one woman said of the evening, and specifically the Carson comments: 'I'm still processing it.' "