Accessibility links
If Twyla Tharp Is Dracula, Dance Is Her Lifeblood Since her 20s, the dancer and choreographer has been rewriting the rules for what dance can be. Now she's on her 50th anniversary tour, premiering new works with longtime collaborators. 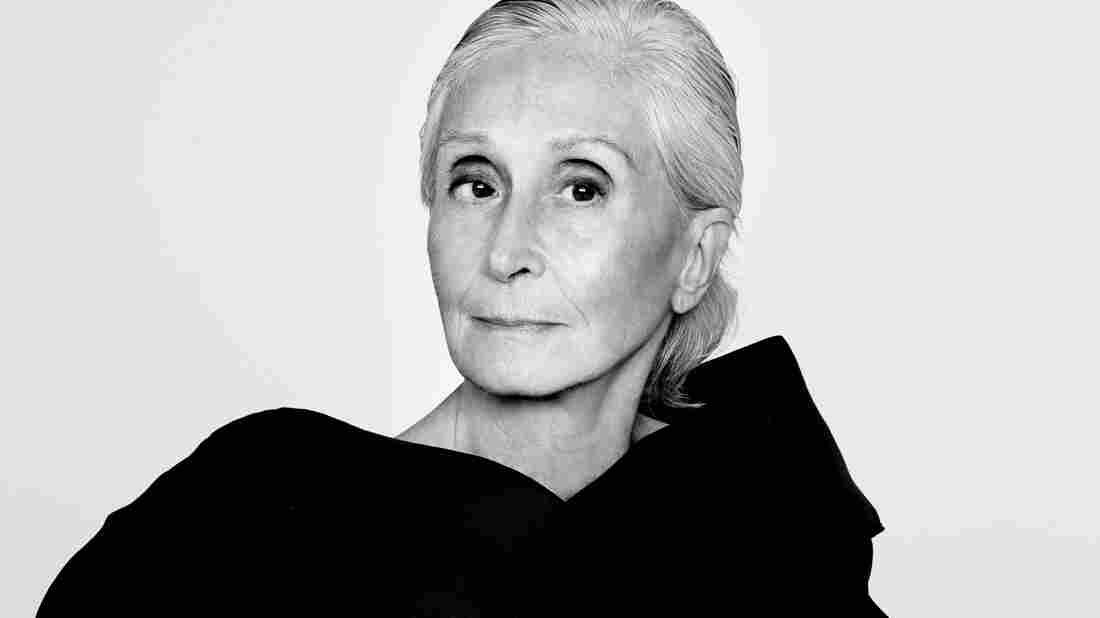 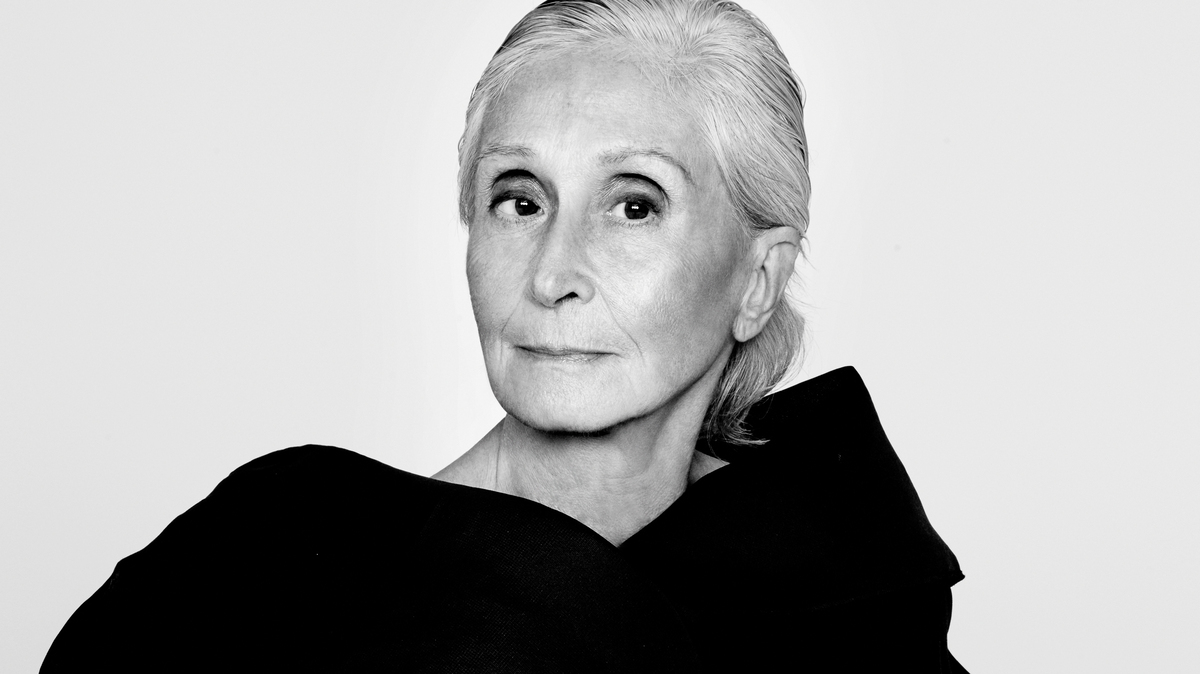 Dancer and choreographer Twyla Tharp celebrates her 50th year in professional dance by taking two new shows on the road: Preludes and Fugues and Yowzie.

Instead of marking a half century with a few of her greatest hits from the ballet, Broadway or modern dance, the woman who has transformed dance in our time is on the road with two new pieces. Twyla Tharp says Preludes and Fugues, set to music by Bach, is "the world as it ought to be," and a jazz piece called Yowzie shows "the world as it is."

At 74 years old, Tharp is lean, limber and silver as a greyhound, with unblinking brown eyes behind round, owlish glasses.

When she thinks a question is wrong, silly or just obvious, she corrects it.

"How did I start to dance? I never did; I always have," she says.

Tharp and her company have played 16 cities in three months. She also writes books and makes films, but dance is her lifeblood. She talked to NPR's Scott Simon about her career and artistry.

On becoming a dancer

As a career I made the choice, consciously, to become a dancer. I could've become an art historian, I could've maybe become a writer, I could've become a painter. But I looked at the world politically and I thought, "Well, here's an even playing field — dance. It's an even playing field. We have women pioneers here. This could work." So I knew I was a very good dancer so I figured I had a foot up on that, as it were. And so I determined to go into that field. It was a very rational choice.

On recently writing the phrase, "Human movement is the basis of all art"

Oh, good for me. Yes. Yes, I say that all the time. Dance is really the only art form without an artifact, which is why it lacks a deep history. It has no commodity to sell. Get real. Anything that can be scored, can be graded, can become industrialized, can become an event. Dance as — that sort of mysterious word, an art form — is not gradable. It's your own determination that evaluates what you do. 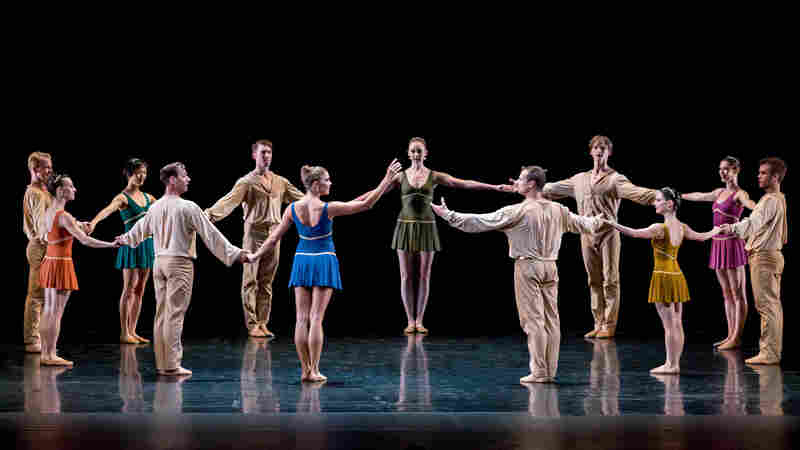 Preludes and Fugues is one of two shows on Tharp's 50th anniversary tour. Sharen Bradford/Courtesy of The John F. Kennedy Center for the Performing Arts hide caption 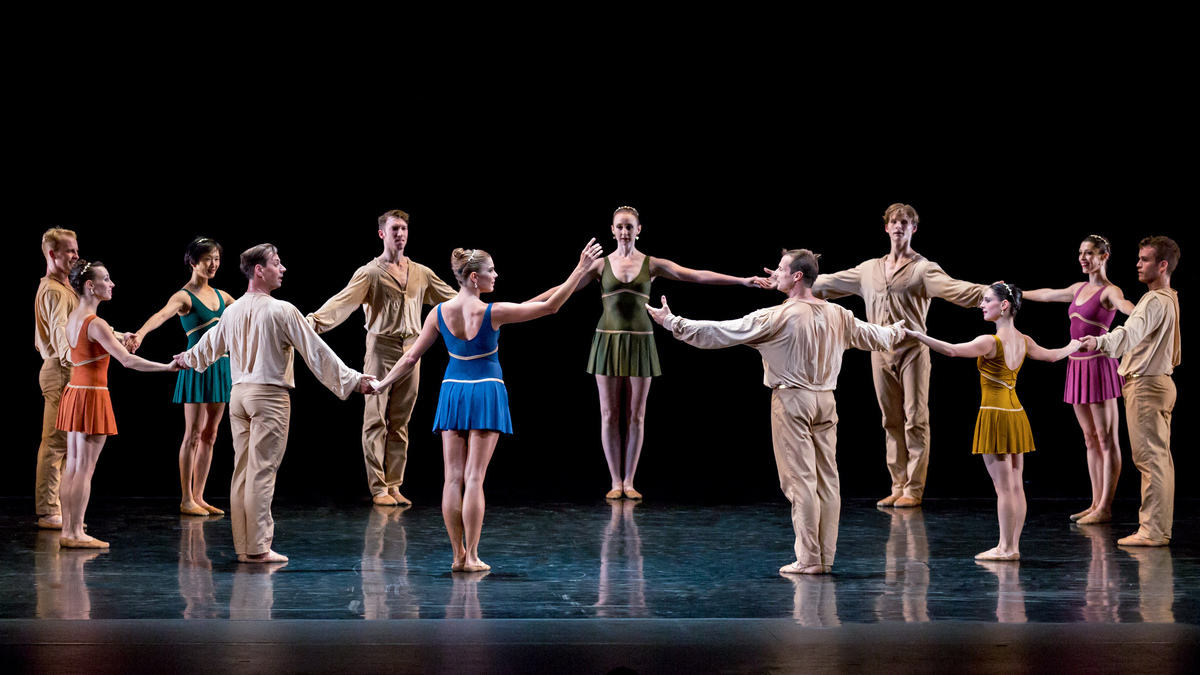 Preludes and Fugues is one of two shows on Tharp's 50th anniversary tour.

Sharen Bradford/Courtesy of The John F. Kennedy Center for the Performing Arts

I have to evaluate every dancer's every performance and address it in terms of the whole. But I do have, in a way, a goal. There's something that it's going towards. But I don't make it the point of the venture. The ultimate work is the point of the venture, rather than the individual performance. ... That's an important point because one of the things that's always been very, very important to me is a group that works well together and that is a really good team, is a really good ensemble, is an entity, is a welded unity. And you don't get that by grading people.

On putting together a dance company

Well, slowly with time. Same way any other functioning group you build slow piece by slow piece. I mean I've had of my own probably three major groups. The very first was all women and we were all basically the same age and we'd just gotten out of college. And that one was relatively easy because we did it because we wanted to, end of story. No one made any money for five years. Nothing. There was no rehearsal space; we used to work in condemned buildings. One of us was very bright. She was from Radcliffe. She got a, you know, condemned buildings list from the city and that's where we would rehearse. Rats, blood dripping through ceilings. It was strange. Not probably salutary.

So that was the first group. The next group built itself into a sort of institution over the course of about 20 years. And one of two, actually, of the women from the original group carried over. Now, it's that kind of thing that is the beginning, because those who hold genetically, as it were, the sum total of your experiences are invaluable.

On her dancers being the native soil to her vampire

Guy had his ways. And in a way it's not a bad analogy because what I do is, you know — can I dance? Sort of. Am I in condition to do much of anything right now? Absolutely not. I don't obviously have the instrument now to evolve really demanding physical movement. For that I need — hello — younger bodies.

I'm Dracula, [the dancers] are the soil and the dance is the coffin.

On where she was when the Sept. 11 attacks happened

We were rehearsing Movin' Out, which is the Billy Joel musical, and we were asked by the World Trade Center to perform. There was a platform between the two towers and we danced on a Saturday night ... so we are the last group to perform at the World Trade Center. And I was in the studio Wednesday morning working early, because I always do, and I'm thinking, "What am I doing here, doing a commercial project when the world's falling apart? How does this track?" And I fixated on WTC I/II and I suddenly realized that that's also the nomenclature for The Well-Tempered Clavier, which is in two volumes — WTC I and II. Any keyboard artist who's a serious musician studies that work. And I thought about it and I thought, "Oh well, look at that, look what's survived." And what is it? It's a message of containment, because Bach was an incredibly educated and profoundly thorough and very religious man who believed there was purpose to his work and that it evolved and that it developed. And in The Well-Tempered Clavier he creates this cycle of study. Some of them are very light, they're little street tunes, and some of them are very profound. So he really goes from a good time to death. And so I recognized in this incredible grab-bag of moments, this overarching proposition that his work could contain every aspect of music. And that what was my responsibility was unity, was to find a way of unifying as many elements as I could and to make this a statement.

On her "responsibility" as an artist

You think of your work as a bridge: You start it here, you get there. That's it. That's the responsibility to yourself as an artist. There's the responsibility to the culture. What do you bring to the culture? Bach obviously brought the sacred music that gives hope in times of despair. I often say if an audience doesn't leave our performances feeling literally better, lighter, freer, we've somehow not succeeded here. And my best, you know, fan letters, if you will, always have something to the effect of, "You give me hope."

On her new performance, Yowzie 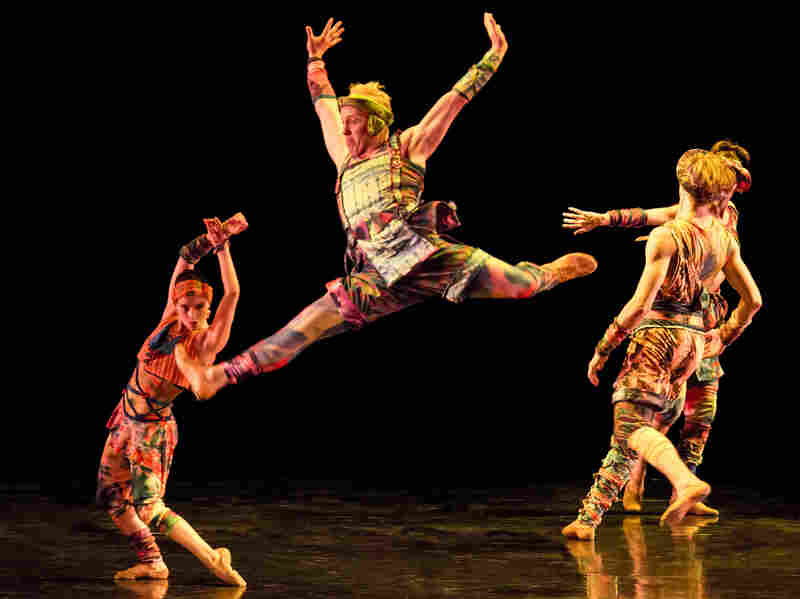 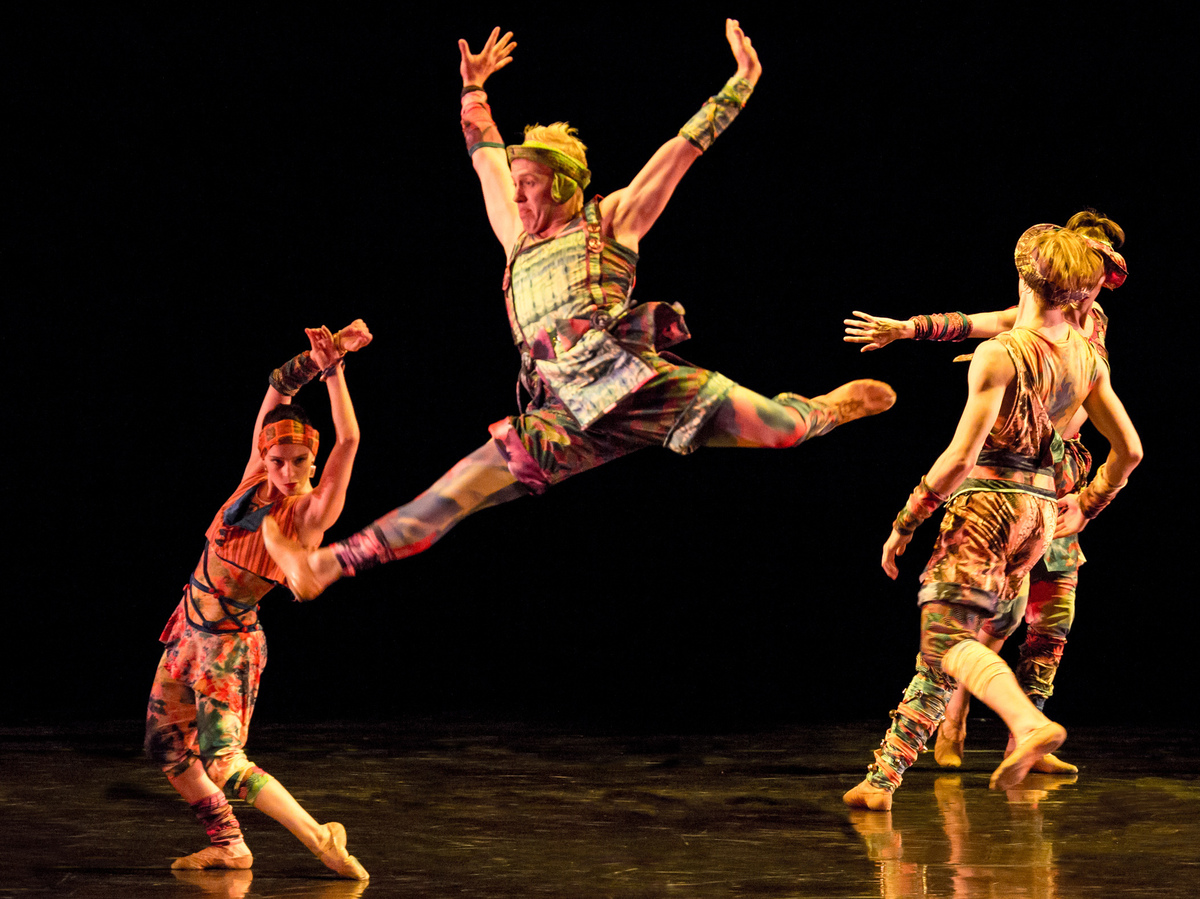 Dancers perform Yowzie at the Kennedy Center in Washington, D.C.

Sharen Bradford/Courtesy of The John F. Kennedy Center for the Performing Arts

Yowzie is an American jazz and it begins with three songs by Jelly Roll Morton, who was the first composer whose music I actually performed to in '70 I think. I'd worked for five years in silence, because as a musician I know that people hear better than they see, they hear emotionally, and so I needed to learn what could movement do. So I did only movement, no music. After five years of that, I decided this is a hard way to go. I think we could use a little reinforcement here. So I started with Jelly Roll Morton. ... Rats and blood to silence. Finding our own heartbeat, which works. You need to know your own independent heartbeat. You need to know who you are regardless of anybody around you.

Each of the dancers has their own requirements and their own necessities and that's their business, not mine. When we're together working, that's my business. So during that period of time, I'm responsible for constructing a vision that will hopefully communicate to an audience a common purpose here. And so that is, we like to think, a world as it ought to be, because it's not real. The world as it is is the outside world. It's the world that we pass through to get to this other place.