Accessibility links
'This Old Man' Looks Back On A Full Life Roger Angell's latest book is a collection of his writings from The New Yorker, centered on "This Old Man," his memorable essay about the pains and pleasures of living into your 90s. 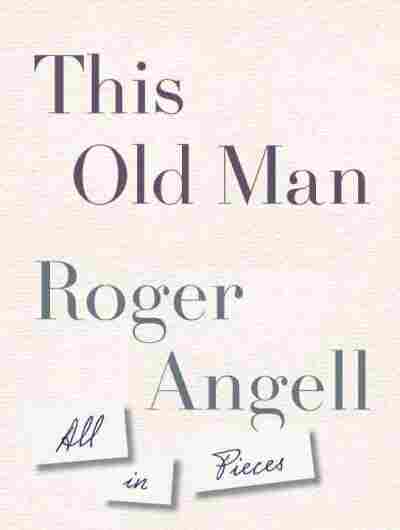 Saying that someone writes like an angel is a well-intentioned cliché. But Roger Angell writes like no one else. His eye and style are utterly clear, compelling, often funny, frequently moving. He's the only writer to be inducted into both the Baseball Hall of Fame and the American Academy of Arts and Letters.
His latest collection, This Old Man: Roger Angell All in Pieces includes articles, profiles, reviews and verse from The New Yorker that range from Vladimir Nabokov to Derek Jeter, recollections of beloved dogs and summer movies and baseball legends. It's a nuts and bolts — or maybe that should be flesh, blood and bones — summing up the indignities and the glories of growing old. Angell tells NPR's Scott Simon that as he read back through his work, he was "surprised that some of the old stuff still held up — or just about."

On whether his stepfather, famed essayist and grammar expert E.B. White, was a stickler about words with his stepson

He was extremely informal at all times. And I don't think he ever corrected me about anything except once when I tried to stand up in a canoe ... He was a terrific step-father. Easy going. He really was the model for my writing, which is a pretty good model, and watching him when I was fairly young, I saw him write the "Comment" page of The New Yorker, the first page of The New Yorker, every week ... he would close his door in his study and sounds of typing would be hesitant, would go on all morning. And he would come out at lunch and look pale and silent. And then mail it off in the afternoon mail and always, almost always, say, "It isn't good enough. It isn't good enough." And a few days later the copy would come back, and he'd see it in the magazine and he would say, "Well, not bad." Writing is hard. Writing is hard for everybody, and I mistrust writers who find it easy. And it's still hard for me after all these years, but that's probably a good sign that it is.

On the book's centerpiece essay, "This Old Man"

And they're wound in and out. And I don't think in a gloomy way. Just as they seem to me in recollection, and often interrupting with change of tone. There are jokes. Jokes about death, even. I think it sounds like me — I love good jokes.

And the piece has had a remarkable reception. I think a lot of it is because, near the end of the piece, there's a lot about old people and their need for love and for sexual affection and intimacy, which comes as such a shock to our children. But it is true and I'm not the first person's who's said this. And I think I do that lightly as well. But I think a lot of old people liked reading this because it said something that they had been feeling about themselves.

It's a surprising thing. I found myself — I say at some point, "How come this accumulation of loss, of pain and the arrival of a certain amount of loneliness doesn't crush us? How come it's not something we think about all the time?" But that doesn't happen. And happiness does occur. The day-to-day seems remarkable in many ways. It's something quite moving and surprising. Almost every day this occurs to you.

On the World Series

I thought it was a surprising meeting of two really very attractive teams, and it was over much too quickly. The Mets didn't play very well, but on the other hand, the Royals did. I saw this Royals team first last year, as we all did, we hardly knew about them, and they played in the World Series and almost won against the Giants. And they would have won except for the great Giants pitcher Madison Bumgarner, who won two games and beat everybody, he was untouchable last fall. Baseball breaks your heart, as Bart Giamatti kept telling us ... I said in one of my blogs, it breaks your heart, but it doesn't tell you what to do with the pieces.