Accessibility links
U.S. Political Reaction To Paris Attacks Split Along Party Lines Politics is never far from controversy — be it Supreme Court rulings, guns or terrorist attacks, like the one in Paris. President Obama — and the candidates trying to replace him — all weighed in. 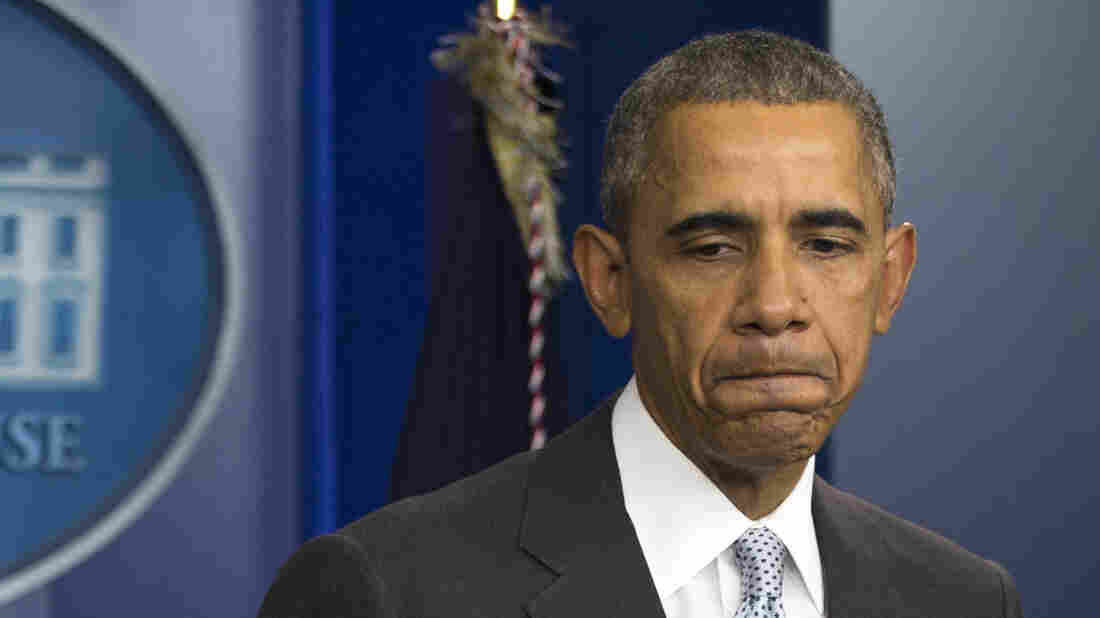 President Obama pauses as he speaks about attacks in Paris from the briefing room of the White House on Friday. Evan Vucci/AP hide caption 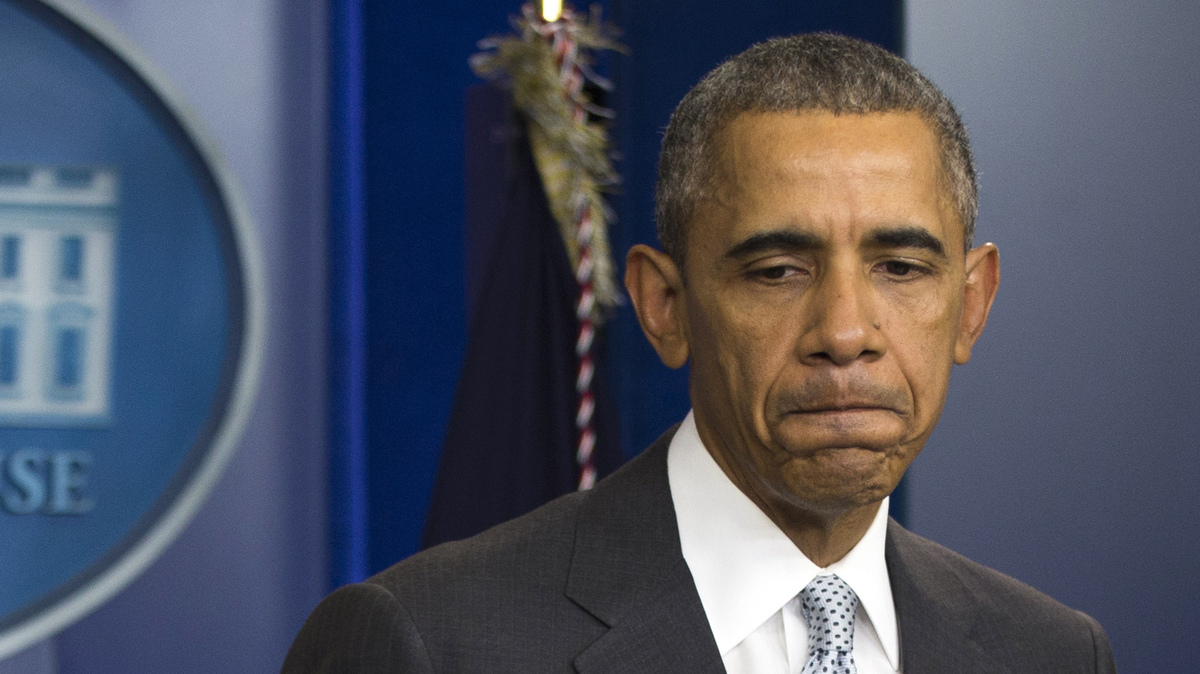 President Obama pauses as he speaks about attacks in Paris from the briefing room of the White House on Friday.

In the wake of controversy of any kind, even terrorist attacks, U.S. politics is never far behind. The American political response — from President Obama to the candidates vying to replace him — in the hours following the Paris attacks has been unsurprisingly split along party lines.

What is interesting, however, is that Democrats, who are set to debate Saturday night, have kept their responses generally to thoughts and prayers — with little in the way of policy prescriptions.

That's understandable, given that a Democrat currently controls the White House and the candidates wouldn't want to appear to undermine the current president of their own party, especially on matters of foreign affairs. But they will be pressed on foreign policy and national security as a result of the attacks at the outset of Saturday night's debate, according to a source with knowledge of debate preparations.

Republicans, on the other hand, are issuing lots of policy specifics and ratcheting up rhetoric, intimating that what's being done — and been done in the past seven years by President Obama — to keep the country safe is not enough. They are calling for an increased U.S. footprint in the Middle East, including "boots on the ground," a halting of plans to increase the numbers of Syrian refugees to the U.S., and an increase in the role of the National Security Agency in surveillance and intelligence-gathering capabilities.

Here's a roundup of reaction.

The Democratic candidates largely stuck to expressing sympathy, thoughts and prayers. Former Secretary of State Clinton, however, did stress that the U.S. and its allies had to "wage and win the struggle" against ISIS.

President Obama: "Once again, we've seen an outrageous attempt to terrorize innocent civilians. This is an attack not just on Paris, it's an attack not just on the people of France, but this is an attack on all of humanity and the universal values that we share. We stand prepared and ready to provide whatever assistance that the government and the people of France need to respond. France is our oldest ally. The French people have stood shoulder to shoulder with the United States time and again. And we want to be very clear that we stand together with them in the fight against terrorism and extremism."

Vice President Biden: "I join President Obama in offering my deepest condolences to all those wounded and to the families who lost loved ones in today's terrorist attacks in Paris. It's heartbreaking. Outrageous. ... Such savagery can never threaten who we are. We will respond. We will overcome. We will endure."

Hillary Clinton: Just an hour after Clinton's Twitter handle sent out a tweet about how to follow her campaign staff's efforts during the debate, she tweeted her sympathies and prayers for Paris (which was personally signed "H"):

The reports from Paris are harrowing. Praying for the city and families of the victims. -H

Follow #Hillary2016 campaign staff to stay in the know during tomorrow’s #DemDebate: https://t.co/Ab57ZumWw9

She later said in a statement, "We must stand side-by-side every step of the way with France and our allies around the world to wage and win the struggle against terrorism and violent extremism."

Clinton has always been seen as more hawkish than President Obama, and that's something that hurt her in 2008, especially in a state like Iowa, which has its caucus roots in the anti-war movement. Saturday's debate is in Des Moines, Iowa.

Sen. Bernie Sanders: The Vermont independent, running for the Democratic presidential nomination, tweeted about debate watch parties, mentioned a former Clinton supporter's endorsement, retweeted that he'd be on CBS' Face The Nation to react to the debate, and outlined what could be potential debate topics — student debt and the Supreme Court's decision to hear the Texas abortion case.

And then, two hours later, his horror about Paris:

Horrified by the attacks in Paris tonight. My thoughts are with the victims and their loved ones.

Gov. Martin O'Malley: The former Maryland governor also seemed to be laying the groundwork for a debate point with his own tweet about the Texas abortion case. He warned that it could "destroy Roe v. Wade" and noted, "As POTUS, I'll fight to defend a woman's right to choose."

Again, two hours later, heartbreak and prayer about Paris (with his personal "O'M").

For Republicans, a different story. The hawks are back in town since the rise of ISIS. National security this year, unlike in 2011 and 2012, ranks as a top issue for Republican primary voters. And the candidates are talking about foreign policy specifics now, even as developments in Paris continue to emerge.

Ted Cruz: Calling for an immediate halt to any plans to bring more Syrian refugees to the U.S. He added that messing with the U.S. and saddling up with ISIS is "in effect, signing your own death warrant."

We must make it clear that affiliation w/ ISIS & related terrorist groups brings w/ it the undying enmity of America https://t.co/oM9GFyPift

Jeb Bush: Wants to bolster counterintelligence, not weaken it. He intimated in an interview on conservative talk radio with Hugh Hewitt that under Obama, the U.S. has "diminished our capabilities at the wrong time."

"The conversation on the periphery of the presidential debate needs to be upgraded as well about what the role of the NSA is," Bush said. "What is our counterintelligence capabilities? How do we identify attacks before they happen? What's the balance between our own civil liberties and keeping us safe? That— we need to have another conversation about that, because I think we have diminished our capabilities at the wrong time."

Marco Rubio: He rattled off six tweets, including that the U.S. needs to "increase our efforts at home and abroad, to improve our defenses, destroy terrorist networks, and deprive them of the space from which to operate."

Rand Paul: For Paul, who picked a fight with Rubio over one of the three legs of the GOP stool — fiscal conservatism — the rise of ISIS has hamstrung his message and, thereby, his candidacy. It's much harder for him to make a case that resonates with the Republican base for limited U.S. intervention and civil liberties when ISIS has emerged as such a threat.

My thoughts & prayers are with the people of Paris. America must stand united with France as they face this truly horrific act of terrorism

Ben Carson: The retired neurosurgeon opened his remarks at the Sunshine Summit in Orlando on Friday night expressing his "heartfelt sympathy" for the victims, NPR's Asma Khalid, who is at the event, reports. "And, it reminds us that there are those out there who have a thirst for innocent blood in an attempt to spread their philosophy and their will across this globe," he said. "And, we must redouble our efforts and our resolve to resist them, not only to contain them, but to eliminate that kind of hatred in the world."

Asked what he'd do about it as president, Carson called for working with allies "using every resource known to man" — economic, covert and overt, and, military, including that "boots on the ground would probably be important." He noted, "I think America's involvement should be trying to eliminate them, completely destroy them."

He blamed the lack of a broader coalition in the Middle East to fight ISIS on the ground on a lack of leadership on the part of President Obama.

"[T]hat's because there's no leadership," Carson said. "You can't really call for something like that and just think it's gonna magically form, it has to form behind a leader. And, once we demonstrate our resolve to defeat not only ISIS, but the entire global jihadist movement I think we will find that there will be adequate people who will join, but bear in mind, they don't want to get involved in something if we're gonna turn, tail and run, or if we're not gonna be reliable, because it leaves them in a very vulnerable position."

John Kasich: He led an impromptu prayer at an event Friday night in New Hampshire, per the Washington Post. He then noted for the crowd that an Ohioan believed to have posted messages in support of ISIS was in custody, something that had been revealed Thursday. "The way you prevent these kind of things from happening is that you know they're going to happen. ... Look, it can really happen anywhere with some of these people who despise our way of life. Look, this is a war on our way of life. This is a war with people who can't be reasoned or negotiated with."

Paris came up again toward the end of Kasich's town hall, and he noted that Europe was bringing in more immigrants. "The root cause is this: People have to assimilate," Kasich said. "And what are we doing to create a situation where they must assimilate."

Later, he tweeted: "We can't wait any longer. ISIS must be wiped out."

We can't wait any longer. ISIS must be wiped out. #Paris pic.twitter.com/q26Bbn9gOA

Lindsey Graham: He called it an attack on "human decency," adding, "There's a sickness in the world that has to be dealt with & we must come together to confront it. America should lead that unity."

There's a sickness in the world that has to be dealt with & we must come together to confront it. America should lead that unity.

It's worth noting that earlier in the day, when Graham spoke before a largely empty room at the Sunshine Summit, he corrected a woman who yelled this out about Obama: "He's a traitor!" Per The Daily Beast, Graham, shot back: "No, ma'am. He's not a traitor. He just doesn't know what he's doing."

Tonight we pray for and mourn with our French brothers and sisters. Today's horror is another reminder that we must be vigilant against evil

Donald Trump: He tweeted his thoughts and prayers:

Earlier, he boasted, apparently in response to a CNN segment, that he was right to propose bombing ISIS-controlled oil fields. That tweet published right around the very first news alerts about Paris were hitting smartphones: