Accessibility links
Barred From Baptism, Mormon Kids Of Same-Sex Couples Face A Fraught Choice The Mormon church recently made a policy preventing children of same-sex couples from getting baptized. The move has exposed a rift among Mormons — and made for some difficult decisions. 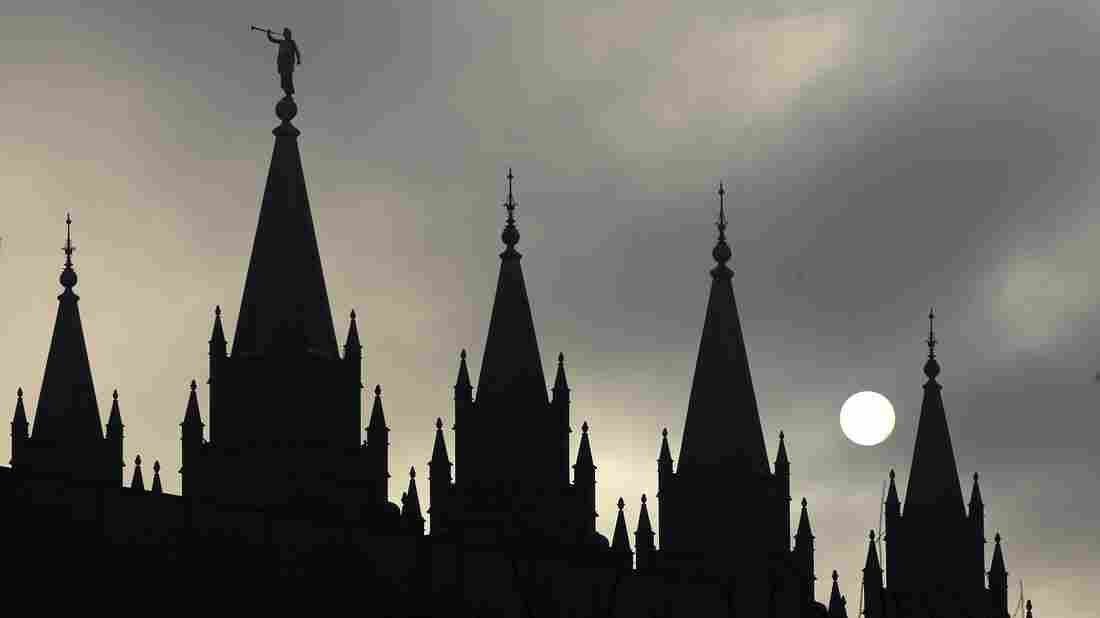 In this February 2013 photo, the statue of the angel Moroni sits atop the Salt Lake Temple, in Salt Lake City. Hundreds of Mormons have resigned their memberships in the church in protest of a new policy aimed at children of same-sex couples. Rick Bowmer/AP hide caption 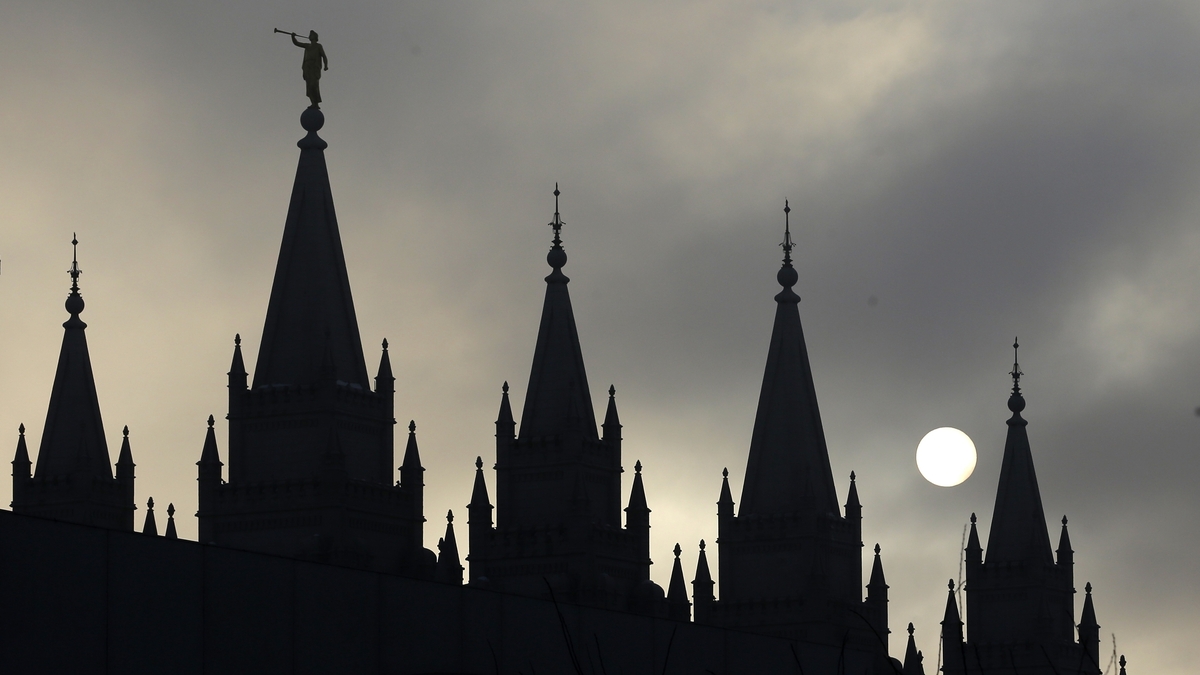 In this February 2013 photo, the statue of the angel Moroni sits atop the Salt Lake Temple, in Salt Lake City. Hundreds of Mormons have resigned their memberships in the church in protest of a new policy aimed at children of same-sex couples.

Janice Unsicker slurps hot chocolate out of a spoon at an IHOP in North Salt Lake City, utterly unaware of the controversy that surrounds her. When asked what she's been learning at her Mormon church, the 6-year-old smiles, simply saying, "About Heavenly Father and Jesus."

Her father, however, has to figure out how to explain that things have changed.

"Her grandparents have been preparing her to get baptized, and she's been excited about it," Todd Unsicker-Montoya says. "I still haven't even told her that now she can't. I don't know how."

Under a new policy from the Church of Jesus Christ of Latter-day Saints, children of same-sex couples are barred from being baptized. That includes Janice and her 3-year-old brother, Trevor, because they live with two dads who are married to each other. After they turn 18 years old, Janice and Trevor will have the chance to be baptized — but only if they disavow the practice of same-sex relationships and marriage.

Hundreds of Mormons resigned their membership in the church Saturday in protest of the policy.

The two children would be eligible for baptism if they lived with their heterosexual mother, but Unsicker-Montoya doesn't think his children should have to choose between him and the church.

"I never had anything bad to say about the church until they did that," Unsicker-Montoya says. "It feels like a direct attack towards them. It doesn't feel fair to punish my kids for the lifestyle I'm choosing to live."

Unsicker-Montoya is resigning from the Mormon church, and many members of his family are joining him, including his mother, Laurie Sheldon.

"Where they say my grandchildren ain't gonna be welcome to be baptized, that kind of breaks my heart — I mean, really bad," says Sheldon. "I mean, you're not supposed to judge anybody, but I feel like now they're judging the kids and that's what hurts. To me, my son and his husband are the best parents ever." 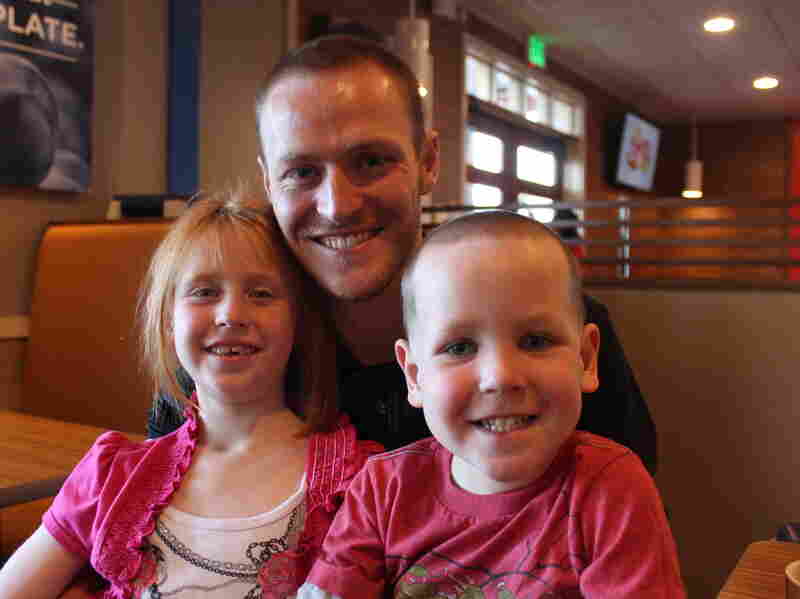 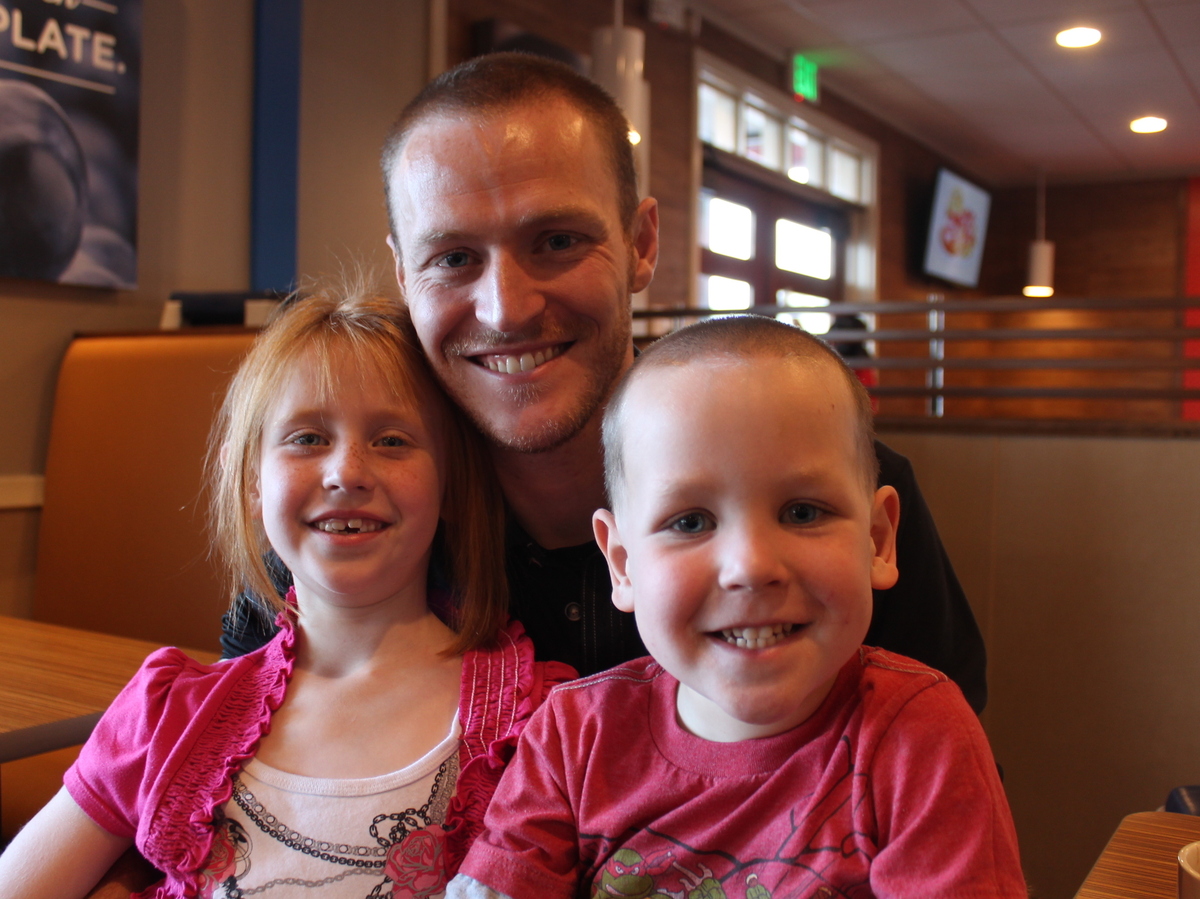 Todd Unsicker-Montoya, with his children, Janice and Trevor Unsicker.

Three of Unsicker-Montoya's siblings are resigning, as well as his ex-wife, who has been going to church with her parents and the kids.

Church officials declined an interview, but in a recently released video, church leader Todd Christofferson explained that the intention is to leave no room for doubt. Same-sex marriage may be legal, but it's still a serious sin in the eyes of the church.

"There's no kindness in misdirecting people and leading them into any misunderstanding about what is true, what is right, what is wrong, what leads to Christ and what leads away from Christ," Christofferson said.

He said the policy was made out of concern and compassion for the children in households with same-sex parents.

"We don't want the child to have to deal with issues that might arise where the parents feel one way and the expectations of the church are very different."

"It felt like a gut punch," says Kendall Wilcox, a faithful member of the church, who says these policy updates go against everything he's been working for.

He's openly gay, but he tries to abide by doctrine. The church teaches that same-sex attraction is not a sin but acting on it is. Wilcox is part of a growing group that has been working within the church to try to build acceptance of lesbian, gay, bisexual and transgender people, but this announcement brings all that into question.

"And in fact," Wilcox says, "we took it very personally, in terms of immediate self-doubt that we had been leading people down a false path."

Still, Wilcox says the fact that the Mormon community is so torn on this issue shows that the empathy that church members feel for LGBT people is colliding with church doctrine.