Accessibility links
Fact Check: Hillary Clinton On Using Force Against ISIS In Saturday's Democratic debate, Clinton said the U.S. has the authority to fight ISIS. But not everyone agrees on that. 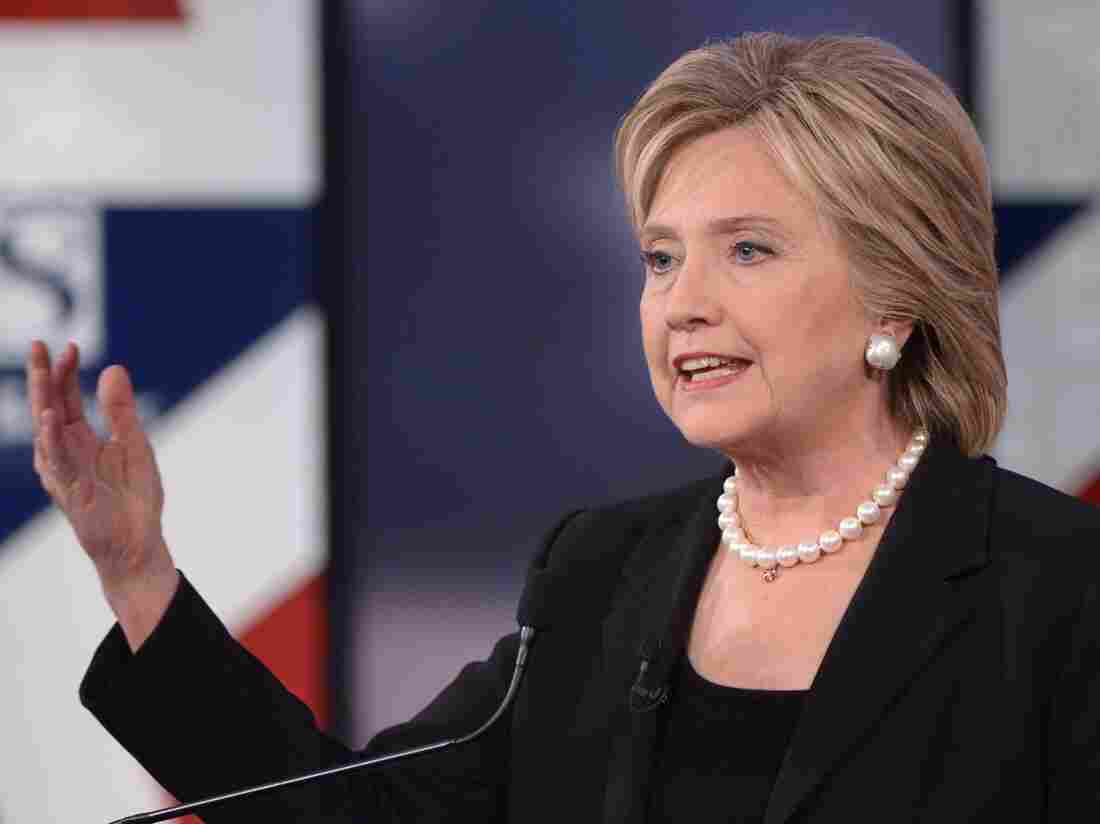 Some legal scholars disagree with former Secretary of State Hillary Clinton's claim that the U.S. has the power to fight ISIS under a 2001 military authorization. Mandel Ngan/AFP/Getty Images hide caption 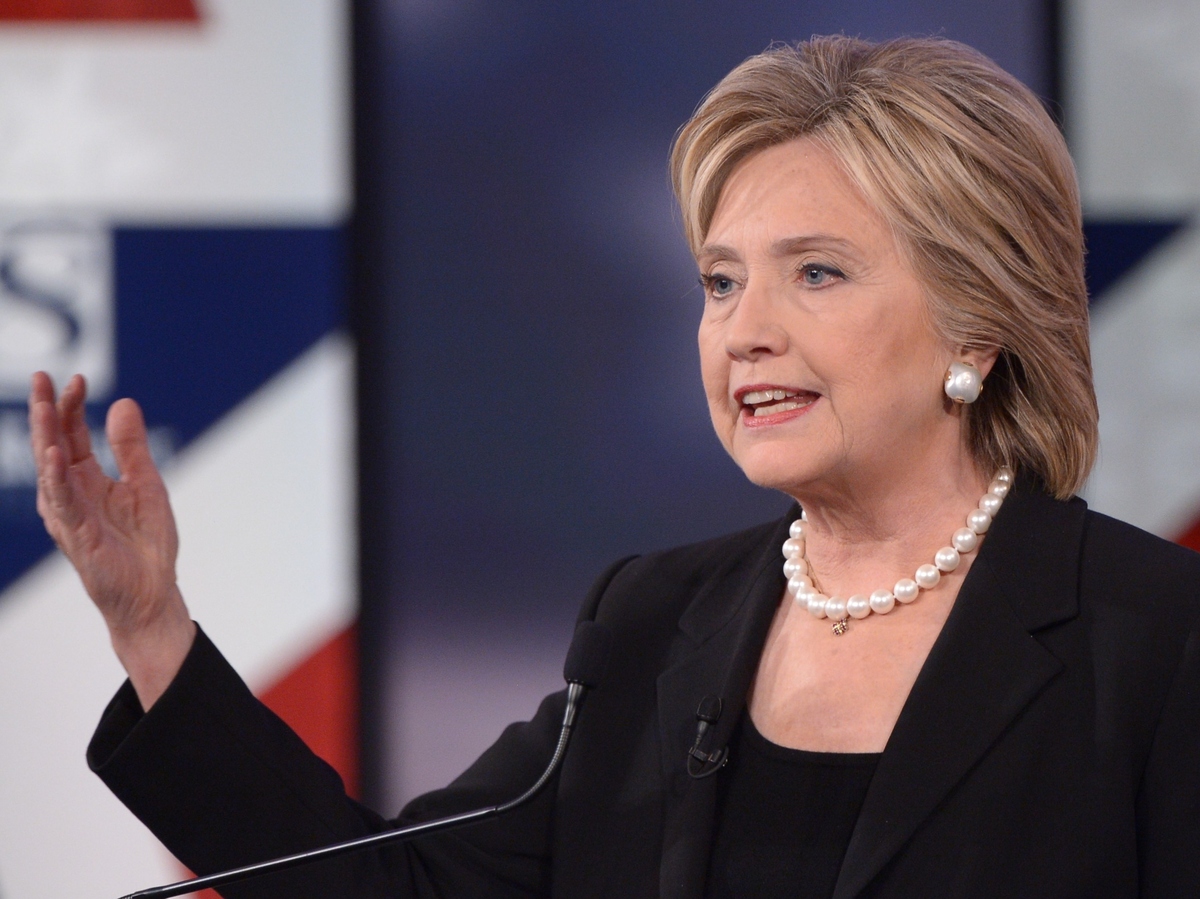 Some legal scholars disagree with former Secretary of State Hillary Clinton's claim that the U.S. has the power to fight ISIS under a 2001 military authorization.

With the brutal terrorist attacks in Paris only one day old, moderators decided to ask U.S. Democratic presidential candidates about issues of national security and terrorism in Saturday night's debate. When CBS' John Dickerson asked former Secretary of State Hillary Clinton whether she would declare war on ISIS, she made a controversial claim: that the U.S. is already authorized to fight ISIS.

That claim sparked some debate on Twitter, as Bloomberg View's Josh Rogin and others attacked Clinton's claims. So we decided to dig into this question: what is the U.S. authorized to do in fighting ISIS?

The claim: "We have an authorization to use military force against terrorists. We passed it after 9/11. ... It certainly does cover it. I would like to see it updated."

The big question: Did that authorization give the Obama administration the power to fight ISIS?

The long answer: When you look at Clinton's specific words, she's not exactly right. When she says the U.S. has "authorization to use military force against terrorists," that's too broad; it's not terrorists writ large.

Rather, the president has a slightly more specific array of people or groups he can go after.

He has that authority through something called an authorization to use military force (AUMF) passed days after the Sept. 11 attacks. Though Congress has the authority to declare war, it hasn't done so since the 1940s. Instead, AUMFs are often used now to authorize combat operations.

The 2001 AUMF authorized military action against people or groups who "planned, authorized, committed, or aided the terrorist attacks that occurred on September 11, 2001, or harbored such organizations or persons."

So, no, it didn't authorize action against "terrorists." However, beyond that word-by-word fact check, Clinton's statement raises the more important (and controversial) question of whom the U.S. has the authority to fight.

That question persists because the AUMF has been interpreted by both the Bush and the Obama administrations as giving broad authority. And it's done a lot of work since then. As of 2013, the authorization had been used to justify actions in 10 countries (not counting Syria at that time).

"What's unusual about the AUMF of 2001 is that it's ambiguous about who the enemy is," said Benjamin Wittes, senior fellow in governance studies at the Brookings Institution and an expert on ISIS and AUMFs.

Indeed, the AUMF doesn't mention any group by name — not ISIS, and not even al-Qaida.

And after the administration ordered airstrikes in Syria last year, this AUMF became one of the primary reasons for why the administration was authorized to do so. (The White House also claimed it could use a 2002 AUMF more specifically focused on Iraq to make its case, but the administration has tried to repeal that AUMF in favor of a more explicit authorization from Congress.)

That "associated forces" phrase, though it doesn't appear in the AUMF itself, has become a big justification for many U.S. counterterrorism actions in the wake of the Sept. 11 attacks and the ensuing wars.

And there is an argument for calling ISIS an associated force. There are definite connections between al-Qaida and ISIS. Indeed, ISIS was at one point Al-Qaida in Iraq.

But you can poke a few holes in this. For one, there was no ISIS in 2001. And if you read the AUMF literally, it looks like it wouldn't cover ISIS — after all, ISIS itself didn't commit the terrorist attacks in 2001.

In addition, in 2014, al-Qaida and ISIS split (which the administration acknowledged in that 2014 statement).

So let's get back to Clinton. In her answer, she appears to agree with the Obama administration on a basic level: that is, that the White House has authority already by extension of the 2001 AUMF, but that Congress also should pass explicit authorization to fight ISIS.

For his part, Wittes believes the administration does have the legal authority under the 2001 AUMF: "Hillary Clinton is solidly within the realm of reasonable opinion here," he said. But he admits that it's an imperfect legal foundation.

"A lot of people, and I am one of them, think that the current administration's view has some legal problems and is not optimal," Wittes said. "It's not a clean argument. It's not an ideal argument. For this reason, the administration has sought a new AUMF to sort of clarify, and that's what Hillary is saying when she says it needs to be updated."

That gives one answer to a puzzling question embedded in Clinton's answer: Why does she (and the Obama administration) want to "see it updated" if the 2001 AUMF and the 2002 AUMF both provide legal cover anyway? It could be to provide a "cleaner" argument, in Wittes' terms. And as NPR's Mara Liasson reported earlier this year, the Obama administration would also like congressional buy-in.

Wittes has also pointed out that Congress has had the opportunity to challenge the president or pass a new authorization, but has not done so, a (non-)move that could be read as "acquiescence" (though some individual members have been loud advocates for a new authorization).

However, some legal experts are much less forgiving than Wittes on the administration's AUMF rationale, as Vox's Amanda Taub wrote last year (full disclosure: I used to work with Amanda at Vox). In a 2014 Time article, Harvard University law professor Jack Goldsmith calls the Obama administration's rationale surrounding the 2001 AUMF "unconvincing," worrying that the AUMF could allow a president "to use force endlessly against practically any ambitious jihadist terrorist group that fights against the United States."

The short answer: Clinton is wrong on a literal level — the AUMF doesn't authorize the U.S. to fight "terrorists." The more important question of authorization for the current fight against ISIS has a hazier answer. The Obama administration's ISIS argument has its backers (Wittes among them), though there is not a clear consensus among experts on this question.

Obama administration statement to New York Times on use of military force.