Accessibility links
Dear Mary-Louise Parker, You've Written A Great Book The actor's new memoir is disguised as a collection of letters to the men in her life. Critic Jean Zimmerman praises Parker's willingness to show vulnerability and her excellent, stylish writing. 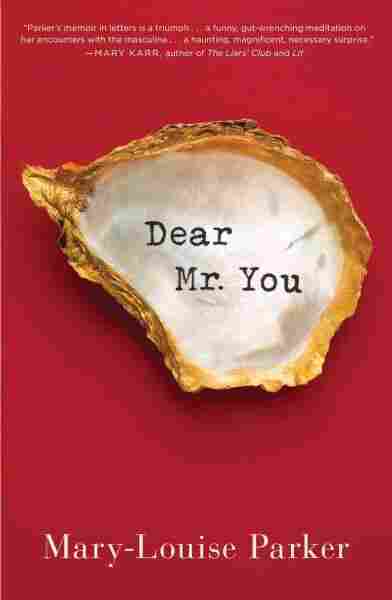 Hey, Mary-Louise Parker, you're a killer actress, you've hit 50, and you've written a funny, clever, genuinely moving book, Dear Mr. You. You took a form, the epistolary novel, mashed it up with another form, the celebrity memoir, and turned them both on their heads. Thirty-four intimate letters to various "Mr. You's" collectively demonstrate you've lived many lives. All the letters are to men, but of course they really serve to reveal ... Mary-Louise Parker.

"I don't believe in endings, happy or sad," you address your correspondents, "so my relationships with you continue to this day." You have terrific recall of the past, the great expanse of it, and it is bracingly present for you. You make it come alive for the reader, too.

Some of your most powerful, soulful writing is about your father, a war veteran who once bought you a diamond ring, ate oysters on his death bed and was apparently the greatest guy in the world. "To convey in any existing language how I miss you isn't possible," you write. "It would be like blue trying to describe the ocean." You tell of his death: "I rotated in a broken waltz in that hateful sunlight which clearly had no idea what it would never shine on again."

In another engaging missive you write to a young man named Blue, a barefoot, loincloth-wearing fruitarian coworker at a food coop who pelts you with flowers and teaches you a thing or two about sweetness. "You were right there and I was afraid of how real you were, which made me question my own level of authenticity." Again, it is about you, not Blue, about your own adolescent struggle. Blue is just the medium. You are the message.

What could have been merely a trope or a trick becomes more than that by virtue of your sheer perspicacity, your willingness to wear your vulnerability on your sleeve, and some excellent, stylish writing.

Letters go out to your accountant, a priest, an anonymous boy you see dying in a hospital, a theater director, a beekeeping neighbor, a 9/11 firefighter, even a billygoat named Gem. And NASA. Is NASA a man? (Just a quibble: Do you ever write to women, say, a female astronaut?) One letter is to a hospital orderly who wants to take your infant son away to a nursery. "You tried to take my baby, dissolving before my eyes when I said no."

Some of this material is so lightweight that it floats off the page. In your theater program, where students learned to enunciate with corks gripped between their teeth, you were supposed to practice "neutrality" but "couldn't even fake it. It's a speed I don't offer on my gearshift." You get probation when the teacher files comments such as, "She asks inappropriate questions that disrupt class," and "Her use of sexuality is offensive."

And yes, you've had your share of stand-out sex. In "To Popeye," you tell us your lover "bolted from work that morning and took a cab sixty blocks for a ..." well, for a very good time. He kissed Coca-Cola into your mouth. In "To Former Boyfriend" you write of a Harley rider with a hog between his legs: "We kissed until our lips were swollen."

Writing a letter, of course, is itself a venerable art form. What could have been merely a trope or a trick becomes more than that by virtue of your sheer perspicacity, your willingness to wear your vulnerability on your sleeve, and some excellent, stylish writing. You can add to your resume, alongside outstanding actress, accomplished author.