Accessibility links
'Target In The Night' Scores A Solid Hit Ricardo Piglia's new novel is a brainy, postmodern, sometimes funny take on the classic detective novel. Critic Michael Schaub says it has echoes of DeLillo and Pynchon, but is wholly original.

'Target In The Night' Scores A Solid Hit

'Target In The Night' Scores A Solid Hit

Nothing in' Target in the Night' is anything less than original. 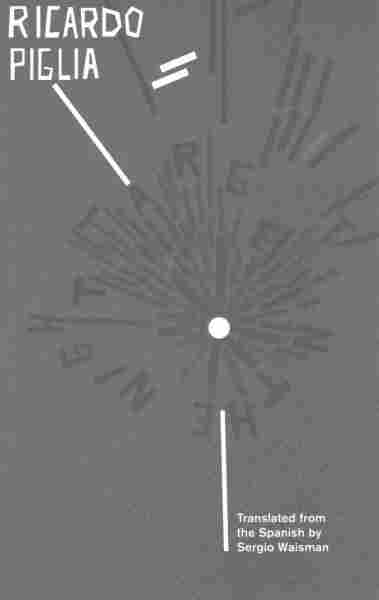 Target in the Night

by Ricardo Piglia and Sergio Waisman

The American writer Edgar Allan Poe might have invented detective fiction, but it's been a long time since the United States has had a monopoly on the genre. In the past few decades, Americans have fallen in love with mystery writers from as far away as Iceland and Japan.

It would be a mistake, though, to call Ricardo Piglia's Target in the Night just a detective novel, although a murder mystery is at its heart. The Argentine author's book, released in Spanish five years ago and newly translated by Sergio Waisman, is much more than that. It's Piglia's postmodern, brainy and sometimes funny take on the detective thriller, and it's an absolute joy to read.

The dead man at the center of Target in the Night is Tony Durán; half black, half Puerto Rican, raised in New Jersey. Durán met twin sisters from Argentina when they visited America, and in short order, entered into an affair with both of them. Later, he showed up in the sisters' small town in the province of Buenos Aires with a briefcase full of American money; his motive for visiting was unclear to the town's residents.

Durán made an impression on the townspeople, but not for long. He's stabbed to death in his hotel room, and nobody can quite figure out why. Inspector Croce, the detective in charge of the case, slowly begins to form a theory. "He wasn't one of us, though, he was different, but that's not why they killed him," he muses. "They killed him because he looked like what we imagined that he had to be."

Croce isn't the only person on the case. Emilio Renzi, a Buenos Aires reporter, comes to the town to write about the murder, interviewing the twin sisters about their troubled family, which includes an oddball inventor brother and an ailing patriarch. (Renzi appears in a lot of Piglia's fiction; he's widely regarded as a stand-in for Piglia himself.)

It obviously wouldn't be fair to reveal too much about how Target in the Night plays out, but it's safe to say that most readers won't see the ending coming. The true joy of Piglia's novel, though, isn't in the revelation at the end; it's in the author's captivating storytelling and his extremely memorable characters.

Chief among these is Croce, one of the more unusual detectives in recent mystery fiction. Croce is an odd figure in the town, riding a one-horse cart around town, and prone to philosophizing and going off on weird tangents. "He was legendary, much loved by all," Piglia writes. "Everyone thought Inspector Croce had a screw loose ... His style sometimes provoked scandals and grumbling, but he got such great results that everyone ended up thinking that his was the way every country Inspector should behave."

The mysterious Durán, and the twin sisters who loved them, also prove to be fascinating characters, if not especially helpful to the investigation. "What's wrong with you?" one sister tells Renzi. "They picked him out on purpose and killed him, on the exact day, at the exact hour. They didn't have that many opportunities. Don't you understand? You don't get that many chances to kill a man like that."

Piglia's characters typically speak obliquely, giving the reader the impression that they all know more than they're letting on (and they do). The author has an incredible gift for dialogue; there's nothing hackneyed or stilted in the novel, and Waisman deserves a large amount of credit for his excellent translation.

It's tempting to compare Piglia to any number of like-minded authors — he has the skewed but perceptive vision of Don DeLillo and Thomas Pynchon, and the novel clearly owes a debt to the American noir authors of last century. But nothing in Target in the Night is anything less than original — it works both as a clever detective novel and a surprising meditation on the complications of families and the way justice works in the modern world.