Accessibility links
'Misery,' 'Misery' And 'Misery,' From Page To Screen To Stage A new stage play finds Bruce Willis and Laurie Metcalf at the controls of an oddly horror-free version of the Stephen King novel.

'Misery,' 'Misery' And 'Misery,' From Page To Screen To Stage

'Misery,' 'Misery' And 'Misery,' From Page To Screen To Stage 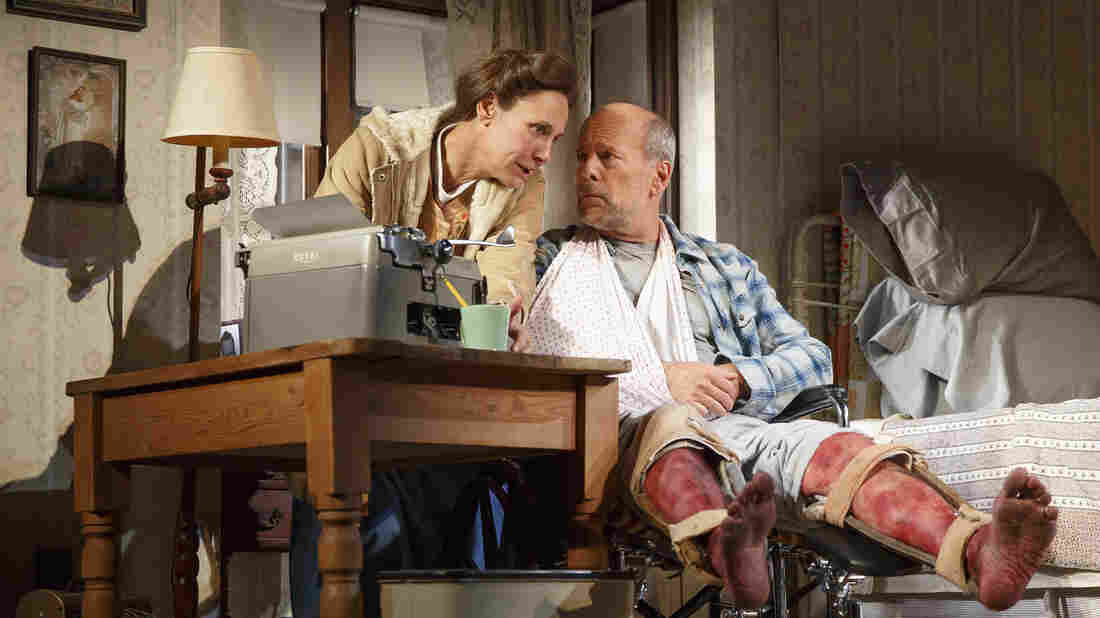 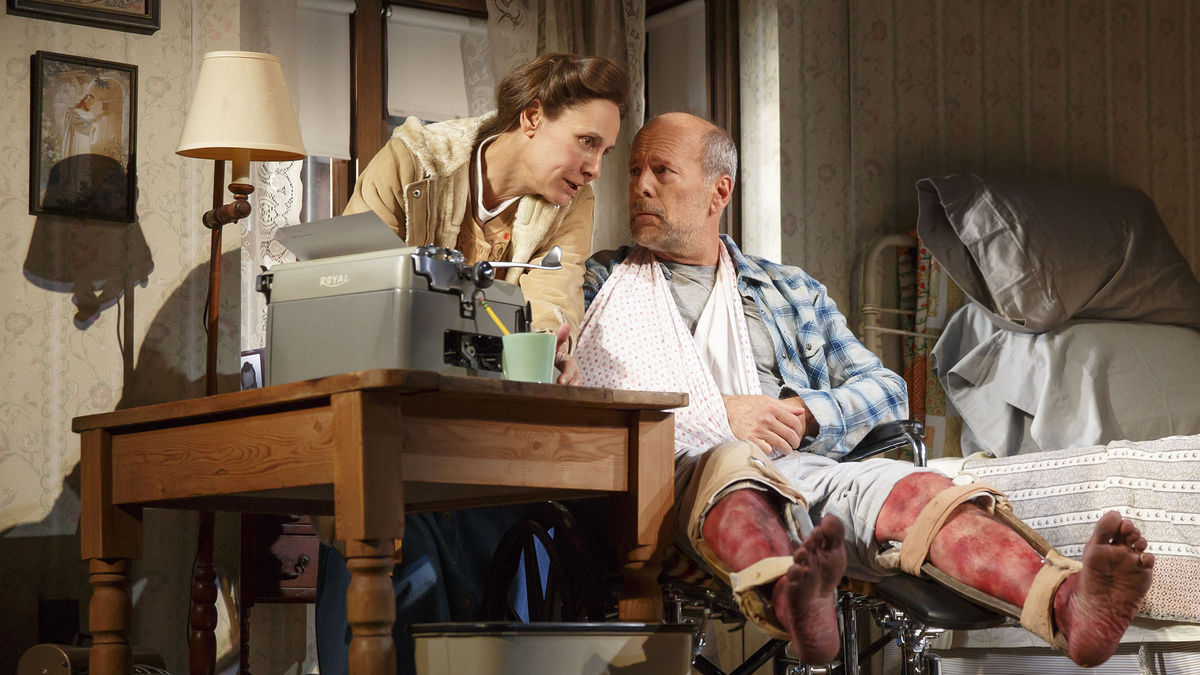 [This piece describes plot elements of Misery stretching back to the novel that was published in 1987. Hopefully, you've read it by now, or maybe seen the movie, which is also quite good and is 25 years old. The age of both will hopefully earn a bit of indulgence when it comes to talking about plot.]

The 1990 film, directed by Rob Reiner and adapted for the screen by William Goldman, instead begins with Paul (James Caan) finishing his novel and setting out on the snowy drive that ends in a car wreck from which we watch Annie (Kathy Bates, who won an Oscar) rescue him. Only then do we enter the fog from which he first sees her emerge. We even exit Paul's world from time to time to visit with the kindly sheriff (Richard Farnsworth) who's trying to figure out what's happened to him.

The Broadway play that just opened this week, directed by Will Frears and also written by Goldman, retains quite a few of the changes made for the movie but opens more the way the novel does. Paul (Bruce Willis) is already suffering in a bed in the isolated house where Annie (Laurie Metcalf) has brought him and is hiding him. All the action takes place inside the house, with Paul in bed or in his wheelchair as Annie flits in and out of the room, bringing pain pills, food, a typewriter, a sledgehammer.

But although the film was received as a successful adaptation of the book and the play hews fairly closely to the film in many ways, by the time it reaches the stage, the fundamentals of Misery are gone, and a truly frightening, psychologically complicated exercise in elemental horror has become a flatter black comedy in which the cringing dread that Paul is going to be brutally murdered or worse — which never leaves the book for a moment — is barely perceptible. It is almost literally drained of blood and, more important, it is drained of urgency.

Part of the reason for that has to do with the way Willis struggles to give Paul any shape, compared to what exists in the original story. The novel contains the plot fundamentals, of course: Annie's discovery that Paul has killed the main character of her beloved Misery Chastain novels, her insistence that he write a new book to bring Misery back to life, his attempts to escape, her brutal responses. But for the most part, it's the story of Paul's terror and despair and his decision-making about what is worth doing in order to remain alive.

On stage, Willis squints and grunts, but neither the pain of his injuries nor his fear of Annie ever seems quite real. In the film, this problem of moving from an internal view of Paul to an external one was solved in part by using frequent shots of Annie from distorted low angles, which both made her more menacing and emphasized that the view was from Paul's chair, Paul's bed, Paul's cold sweat and racing heart. The staging of the play, on the other hand, is resolutely objective, and with Annie so mobile and interesting and Metcalf so bleakly funny and strangely sympathetic, it's hard for the center of gravity to be anywhere near Paul. He seems to only be an axis for her to rotate around, and most of the psychological depths of the book, including Paul's addiction to the pain medication Annie provides and his baffling discovery that he can find satisfaction in writing even under threat of death, are left to fizzle. In fact, most of what is truly upsetting and haunting in the book is gone, traded in for an almost kitschy cat-and-mouse game.

Readers of the novel know that the body horror in it is significantly more pronounced than what shows up in either the film or the play: rather than the well-known scene in which Annie breaks Paul's ankles with a sledgehammer, the novel has her cut off his foot with an axe and his thumb with an electric knife. The novel describes her amateur job of patching up his broken legs in a way that makes his predicament — and the pain that's driving him to take refuge in pills — much more pronounced than the play can reveal. It takes Paul a while to even look at his legs, but when he does: "The legs themselves meandered strangely up to his knees, turning outward here, jagging inward there. His left knee — a throbbing focus of pain — no longer seemed to exist at all. There was a calf, and a thigh, and then a sickening bunch in the middle that looked like a salt-dome." He describes his legs as "pulverized."

But maybe most damaging to the tone of the novel is the fact that in the play, there is no sign of the sequence in which Paul realizes that Annie has a long history of murder, and specifically of murdering people in her care. The theatrical audience is asked to believe that Paul reaches the conclusion that Annie intends to kill him, but can easily assume he might be wrong, because it's spared his perusal of the scrapbook that reveals that she's been finding diabolically undetectable ways to kill people since she was a child and through her career as a nurse. She's killed infants. She's killed old people. It's not just that there's every reason to believe she intends to kill him once he finishes the task she's given him: it would be absurd to believe anything else. This scene made it into the movie, but in the play, Annie's history is more one of loss and suffering than of serial murder.

Laurie Metcalf is very good at the task she's been given here, which is to present Annie as pitiful, injured, lost, and maybe even fundamentally sweet in what is admittedly a very, very strange way. She's a nightmare vision of an overenthusiastic fan, but she's fundamentally comedic in presentation (after the end of her interaction with local law enforcement, she delivers a regrettable punch line that would not have fit either the book or the film). Willis, perhaps understandably, only seems comfortable when he's reacting to her with wise-guy frustration that matches that tone. It doesn't help that once the physical action that's inevitable from the opening finally arrives, it's not at all convincing, particularly in the case of a heavy blow that can't be sold with blood when it never seems to involve a collision to begin with.

There are structural ways in which Misery seems like a natural for the stage. It takes place in a chokingly confined space, almost entirely between two people. And in fact, the construction of the rotating set of Annie's house is clever and allows a good recreation of a tense scene in the film in which Paul, having sneaked out of his room while Annie was out, tries to get back before she does. But without energy coming from Paul and without the willingness to commit to the horror elements of the book or the backstory of Annie's character, it becomes a sort of pitying portrait of a pitiable person who almost seems to do harm only by accident. Moreover, King's career-long preoccupation with the monsters he associates with writing is largely lost as well, with Paul's forced burning of his treasured new manuscript feeling nowhere near as devastating as it should.

Monsters in Stephen King stories are typically not there to be studied or gawked at in and of themselves, as monsters. They are only there for someone else to meet and fight. Very often, they turn out to be either metaphorically or literally invented by whatever person encounters them. Kathy Bates' presentation of Annie so thoroughly dominates the public memory of Misery that it's easy to feel like it's a story about her, but it's not. It's about Paul, a conflicted writer and newly minted drug addict full of self-loathing, loathing of his own readers, and ambivalence about his own experience of fame despite his need for the validation it provides. He can't write these books, but he can't not write these books. He can't stand not to be adored, but now the manifestation of that adoration wants to literally tear off pieces of him until there's nothing left.

That's what's a bit sad about seeing the story knocked around until this is what people see: a funny little thriller about a guy trying to poison or burn or whack this cartoonishly nutty lady who has him tied up. The source material is a much worse story, a more interesting story about bone-deep fear. They've perhaps succeeded in making the story they set out to make, but it seems like an unfortunate choice.