Accessibility links
In 'Good Dinosaur,' Director Peter Sohn Helps An Herbivore Conquer His Fears Arlo the dinosaur is scared of a lot things, and that's something Sohn says he can relate to. "That test has been with me my whole life — trying to find ways to get through these little fears." 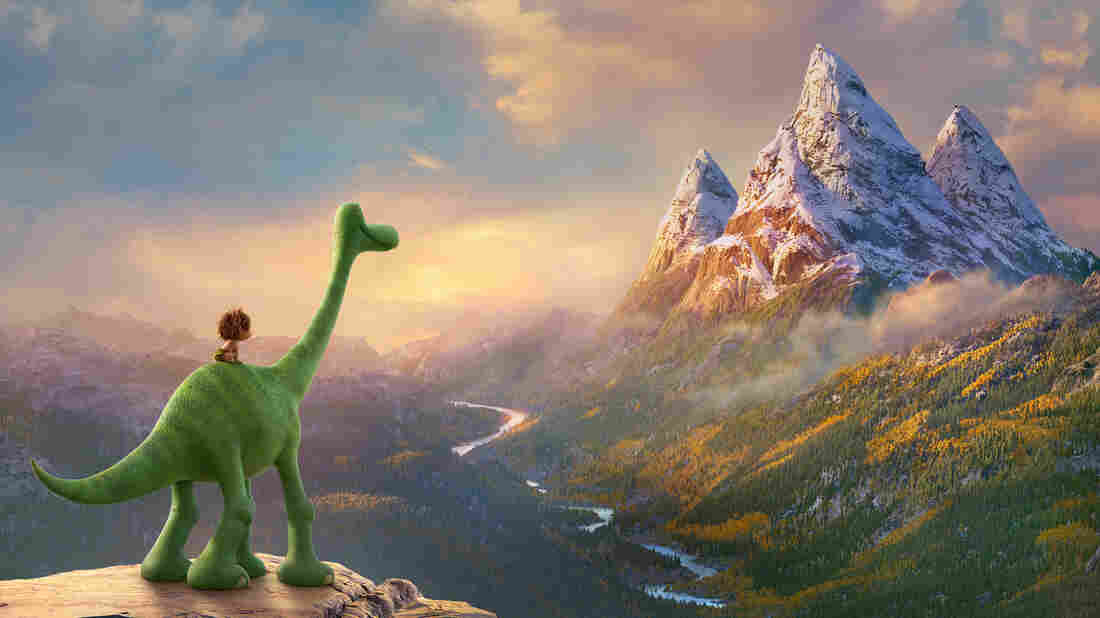 Arlo the dinosaur befriends Spot, a feral boy, on his journey to find his way home in The Good Dinosaur. Pixar hide caption 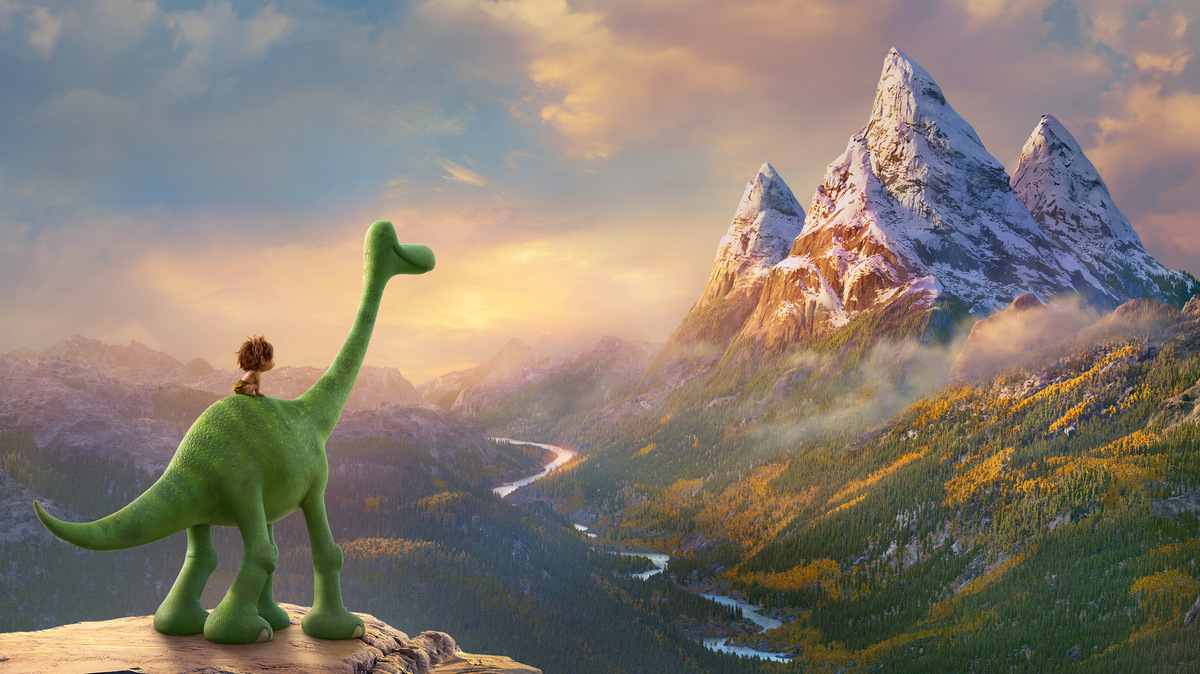 Arlo the dinosaur befriends Spot, a feral boy, on his journey to find his way home in The Good Dinosaur.

Growing up in New York City, film director and animator Peter Sohn remembers visiting the American Museum of Natural History as a kid and being awed by the dinosaurs on display there.

"There was a barosaurus in the atrium," Sohn tells Fresh Air's Terry Gross. "It was kind of standing on two legs, and it blew me away, that thing. ... It ignites the imagination to think that something that large could've roamed around New York."

Decades later, dinosaurs continue to spark Sohn's imagination. His new Disney/Pixar animated film, The Good Dinosaur, imagines a world in which the dinosaurs did not go extinct and people and dinosaurs now live together. At the center of the movie is Arlo, an 11-year-old dinosaur who becomes separated from his family during a flash flood and must find his way home with the help of a feral boy named Spot.

Together they confront predators and dangerous storms, which is especially difficult for Arlo because of his myriad fears. Sohn says that Arlo's tentative nature reflects his own disposition growing up. "I remember not having a lot of confidence because of the way I looked and being kind of a minority in New York," he says. "Trying to learn to be more confident and trusting yourself was a big deal for me. ... I feel like that test has been with me my whole life — trying to find ways to get through these little fears or big ones."

On coming up with the concept for The Good Dinosaur

When you make a "what if" like that, you could really go anywhere. It could be dinosaurs driving in cars and stuck in traffic or dinosaurs in space or whatever it was. In the early development, I was just doing some drawings and I started this one drawing of a long-neck type of an apatosaurus with his head in the ground plowing the earth, and there was something really kind of interesting about a dinosaur almost like a giant tractor and farming. ... [I thought,] "What if they evolved to become almost agrarian if they're herbivores?" And that started opening up other doors. If you're a carnivore maybe you're a rancher? There was something really sincere about this farming dinosaur.

On choosing to pursue a career in art 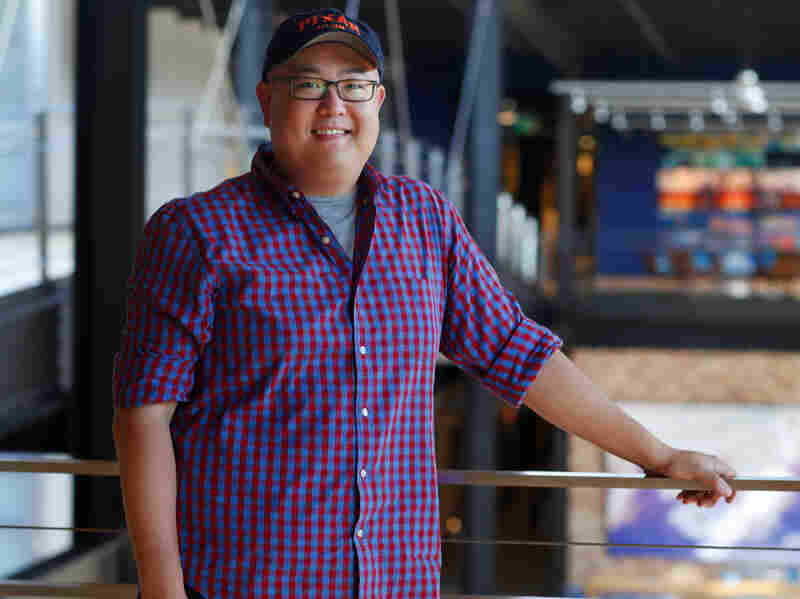 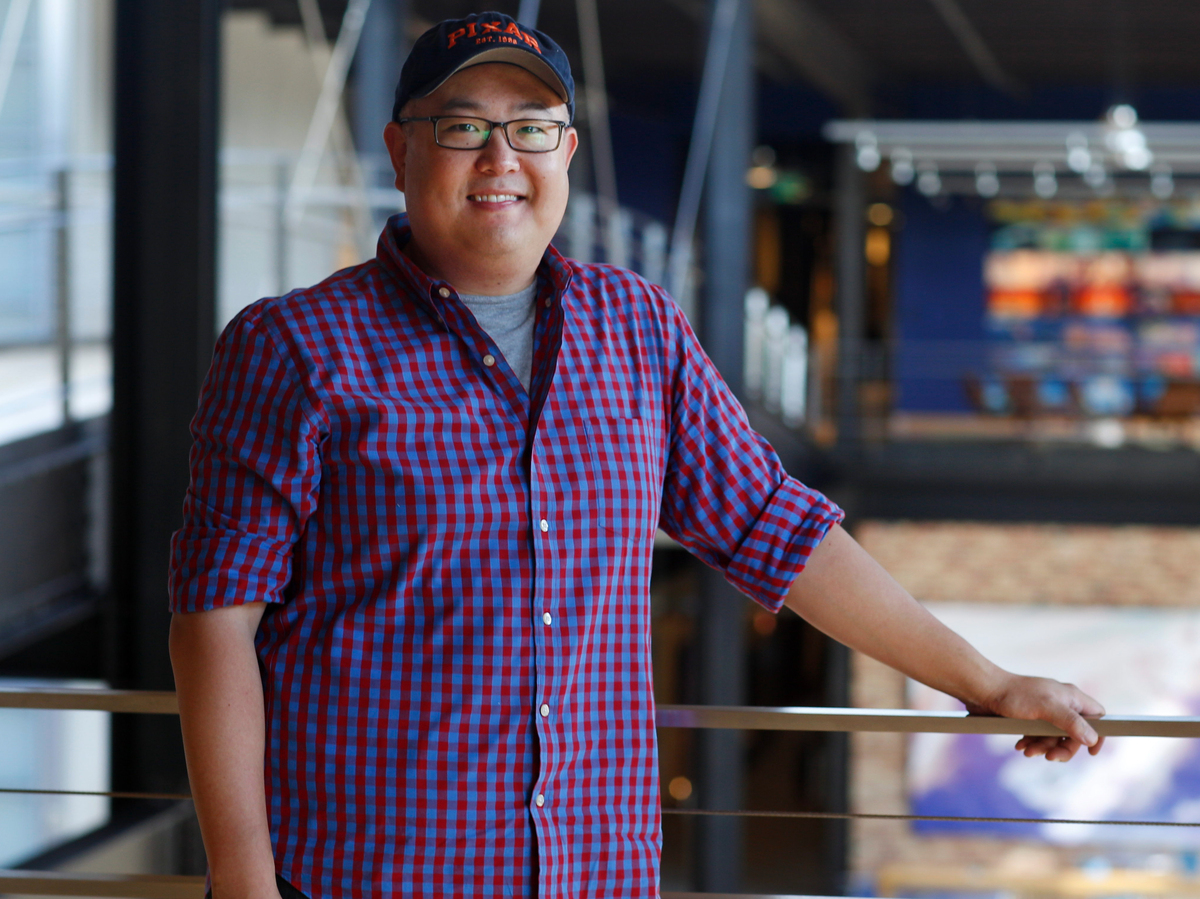 I was born in New York, and my parents were born in Korea, and they came here during the '70s and they would work very hard to create a life for us. So the life, I think, that was going to be made for me was that I was going to take over the [family grocery] store. And by the time I got into junior high, I found this love for animation. It was a really sincere love for it, and I began to try to fight for this world of art, if that makes sense, knowing that culturally my parents didn't understand how you could have a career drawing cartoons. ... I don't even think they really understand what computer animation is today. So they would really push for me not to go to that world of art, and the more I drew, the more confidence I found in trying to fight for that.

On going to the movies with his mother as a kid

[At] our parents' grocery store there would be a kind of weekly ritual where at the end of the week, around Friday or Saturday, ... my mom would get this big deposit bag. ... She would deposit the money at the bank, and if there was anything left over she would take me or me and my brother to the movies, like all the time. She loved them so much. ... It was a real experience for me because I remember that because she didn't speak English very well, she would always ask me to translate the movies for her. So we'd be sitting in some theater in the Bronx somewhere, ... there'd be an American movie playing and an actor or actress would say something and then she would lean over and ask [in Korean,] "What did that person say?" and I would try my best to explain what was on the screen or what the character had said. ...

But there were some that I didn't have to translate, and, honestly, the animated movies that we had seen were told so well visually that she didn't need any explanation. I remember clearly seeing Dumbo with her and there's that scene in the movie where Dumbo's mother was caged up and Timothy the mouse brings Dumbo over to kind of make contact — this beautiful animation of these two trunks trying to reach for each other, until finally the mother's trunk picks up Dumbo and swings her like it was a little bassinet. I remember my mom tearing up at this moment, and I didn't have to say anything.

On playing the older brother rat, Emile, in Ratatouille

I was a storyboard artist on that film and I remember [director] Brad Bird coming to me and saying, "Hey, you're perfect for the role." And I remember thinking, "OK. This is a rat that eats garbage and he's overweight," and going like, "Gee, thanks Brad. I don't know what you're quite saying there, but thank you so much." As we were kind of pitching boards, I would do the voice and the voice really isn't that different from what I'm doing right now, other than that I'd be a little more naive and more excited about what my brother, Remy, was doing. ...

Brad would always have me eating something, so I was talking with my mouth full. That was an interesting process because there are certain foods that sound good [on mic] and there are certain foods that sound absolutely disgusting when you're chewing it. The secret for me that Brad kept giving were Twizzlers or Red Vines. So I'd stuff my mouth with these Red Vines and try to go through the lines.

On inspiring the character of Russell in Up

I did a lot of the scratch voice for Russell in the early production of that film, and I was in early development with them doing storyboards and I remember that there are these sessions when you're sitting around a table and you are coming up with ideas [and] a lot of artists will draw each other all the time and caricature each other. We would call [it] "jacking each other" — where you would flip a drawing at someone and your nose is huge or something. They kept drawing me like a giant thumb with a hat and these kind of little Asian eyes, and somehow that shape kept recurring until it became Russell, this Asian-American kid. I got to tell you, I'm so proud that there's this Asian-American kid in an animated movie.