Accessibility links
'We, Robots' Takes Scholarly, Satirical Aim At Science Curtis White is no enemy of science, but his new book criticizes what he sees as today's overreliance on rigid thinking and social organization, and our unquestioning optimism about technology. 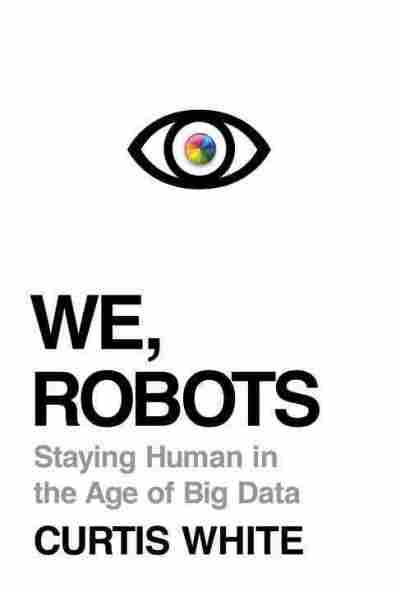 Staying Human in the Age of Big Data

In 1950, Isaac Asimov revolutionized how we think about robotics with his short story collection I, Robot. The world has changed a lot since then, a fact Curtis White points out — and points out, and points out — in his book We, Robots. Subtitled Staying Human in the Age of Big Data, White's book is something of a sequel to his last one, 2013's The Science Delusion, in which he stirred up controversy by using both philosophy and satire to help puncture what he sees as today's overreliance on rigid, systematic thinking and social organization. He sees it everywhere: In the way free wifi has become the new opiate of the masses; in the way we desperately rely on empty optimism about technology; and in the way we unquestioningly adopt the narratives — and even the glib neologisms — of the Silicon Valley technocracy.

Science isn't exactly White's archenemy — he's no climate-change denier or creationist — but according to him, it has been weaponized by those who have a vested interest in keeping people marching in a straight, mechanistic line.

That said, We, Robots is not a rehash of The Science Delusion. In some ways, it's a clarification. The title is obviously far less provocative than that of its predecessor, especially to those who tend to view science through more utopian lenses. And the meat of the book is a bit more seasoned, even as it scathingly takes on economics, politics, theology, neuroscience, education, environmentalism, the corporate elite, literary criticism, and pop culture. It's a meandering meditation — one that's not as tech-centric as its subtitle implies — that says as much about White's grounding in Romanticism, postmodernism, Marxism, and the '60s counterculture as it does the objects of his ire.

White hasn't changed his mind about how the cheerfully oppressive culture that surrounds science has insidiously insinuated itself into the way we eat, pray, and love, among other things. Still, We, Robots does a much better job of preaching to the choir; it's clearly not written to persuade those on the other side of the perceived aisle, whether they're libertarians, urban planners, or Silicon Valley execs. It occasionally lapses into straw-man arguments and excessive stretches of philosophical reverie, but even those are pulled off with a passion — or at least a wink — that wasn't as pronounced in The Science Delusion.

Science isn't exactly White's archenemy — he's no climate-change denier or creationist — but according to him, it has been weaponized by those who have a vested interest in keeping people marching in a straight, mechanistic line.

In particular, a chapter titled "The People of the Id" is a backhanded defense of white, rural, conservative Americans (or rather, in White's roundabout argument, a condemnation of the way they're stereotyped by liberals) that feels more like an excuse to gleefully air out those selfsame stereotypes. On the plus side, it is genuinely funny, and that humor helps the medicine go down. "Please excuse the levity. It's a necessary antidote to this junk," White says elsewhere after cracking a joke at the expense of biologist E. O. Wilson, whom White accuses of confusing the scientific method with morality. The book pops off the rails toward the end; it closes with a gushing, rambling ovation to avant-pop musician Sufjan Stevens that only barely saves itself by morphing into a heartfelt manifesto about the value of counterculture in today's technocratic, deterministic world.

Of course, White also takes on the inspiration for his book's title: Asimov himself. In a Swiftian critique of the legendary science fiction author, White faults Asimov for not fully exploring the negative ramifications and ethical paradoxes of robotics — and, by extension, technology as a whole. White's wit is sharp, and he's not afraid to wrangle with very definitions of freedom and humanity in his attempt to apply the brakes to runaway optimism — a breakneck, headlong plunge into tomorrow that isn't pausing enough to see what's being lost in the process.

Discursive, scholarly, and crackling with intensity, We, Robots works best as a jolt of self-awareness, a circuit breaker for the narratives that we often unconsciously allow our lives to follow — be they nationalistic, scientific, or simply the way we plug ourselves into our assigned slots each morning. Ultimately, he argues, a profound sense of playfulness may be our only hope. White walks it like he talks it; We, Robots is both erudite and irreverent, and humor is as much his method as it is his message.