Accessibility links
Some States Are Cutting Poor Dads A Deal On Unpaid Child Support In exchange for completing job training and parenting programs, Maryland is writing off some of parents' back child support. Similar efforts across the country are addressing the staggering debt.

When the state of Maryland wanted to reach dads who were behind on their child support payments, it started in the boarded-up blocks of West Baltimore, in neighborhoods marked by drugs, violence and unemployment.

In just four zip code areas, the state identified 4,642 people who owed more than $30 million in back child support. Most of that was "state-owed," meaning that rather than going to the child through the custodial parent, it's supposed to reimburse taxpayers for welfare paid to the child's mother.

This is a source of great resentment for many men, who say they want their money to go to their children. But most who owe it can't pay anyway, as they earn less than $10,000 a year.

How U.S. Parents Racked Up $113 Billion In Child Support Debt

"So even if we use taxpayer dollars to chase 'em down, and we catch 'em, right, and we go into their pockets, there's nothing in there," says Joe Jones of Baltimore's Center for Urban Families.

"We're talking about individuals that are economically challenged, they're underemployed, but they want to do the right thing," he says.

Unpaid child support in the U.S. has climbed to $113 billion, and enforcement agencies have given up on collecting much of it. They say too many men simply don't have the money.

What's more, research shows that high child-support debt can leave parents feeling so hopeless that they give up trying to pay it.

Breaking Through The Distrust

Like a growing number of state government officials, Maryland's DiPrimio wanted to make parents an offer. But he needed their trust, and that was a problem.

Research shows high child support debt can leave parents feeling so hopeless that they give up trying to pay it.

And sting operations to round up parents who owed child support have happened all over the country, including Baltimore. In a typical ruse, agencies have sent fake letters telling parents they won tickets to a football bowl game, for instance — but when they showed up to collect, they were arrested instead.

To break through years of distrust, Maryland sent letters to parents with the logo of the Center for Urban Families, a nonprofit in West Baltimore that provides job training and other help to poor families.

They made this offer: If the parent takes the center's month-long employment training course and lands a job, the state will forgive 10 percent of his or her child support debt. If they complete a Responsible Fatherhood program, the state will write off another 15 percent. One of the first persons to sign up was a mother, though the vast majority of noncustodial parents are men.

In a separate "debt compromise" program, Maryland will also write off 50 percent of a parent's child support debt if they maintain monthly payments for a year.

Response has been slow. In two years, slightly more than 100 parents have signed on. 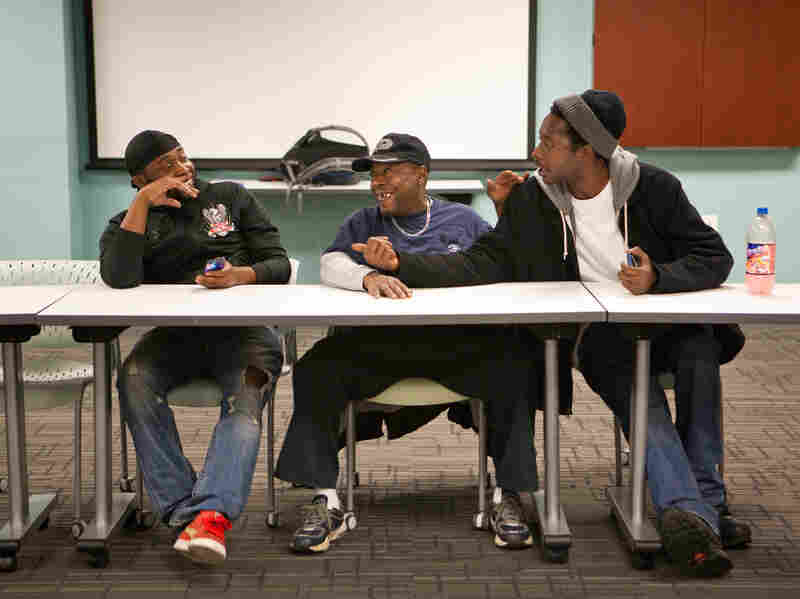 From left, Stephen Johnson, Harrelle Felipa and Cornelius Dixon attend a Responsible Fatherhood meeting at the Center for Urban Families on Nov. 11 in Baltimore. In exchange for participation in programs such as this, the state will reduce the men's child support debt. Jun Tsuboike/NPR hide caption 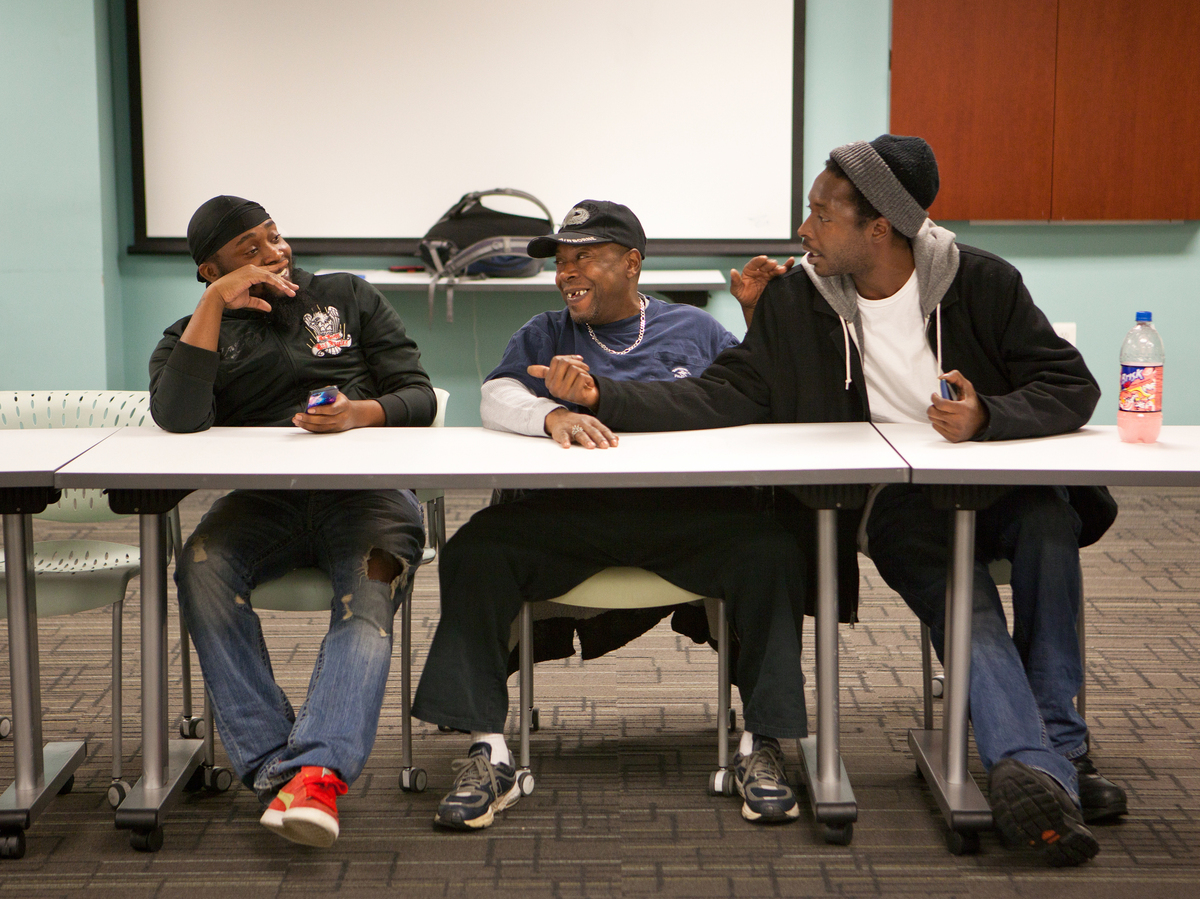 From left, Stephen Johnson, Harrelle Felipa and Cornelius Dixon attend a Responsible Fatherhood meeting at the Center for Urban Families on Nov. 11 in Baltimore. In exchange for participation in programs such as this, the state will reduce the men's child support debt.

Many of them attend fatherhood meetings like one held on a recent Wednesday night. Two dozen men — 20-something to middle age, in sweats and in suits — sit in a large square.

Some complain their exes won't let them see their child if they haven't paid child support. Others don't understand why it doesn't count as support when they take their kids out to eat, or buy them clothes — or say they would do those sorts of things for their kids if their child support obligation wasn't so heavy.

Mostly, like 30-year-old Lee Ford, they say it's so hard to find work

"You telling me no matter what, I gotta pay. But I can't get a job to work to save my soul," he says.

"If you know you got a criminal record, sure it's gonna be hard for you to get a job. But it don't mean you can't work," White says.

A big part of this class is also educational. White asks the men what a person who is paying child support should do if he gets laid off or loses his job.

"There you go, that's the word. Immediately," White says. "Immediately ask the court for an adjustment."

Other Approaches To Debt Relief

Maryland's program is part of a larger effort to keep impoverished parents from racking up child support debt in the first place.

Some states are trying to speed up the cumbersome process of adjusting an order when a parent loses a job. Ohio has experimented with sending simple reminders — by phone, mail or text — to parents who need to send in monthly payments. Texas has reached out to newly incarcerated parents, to let them know they can apply to have their payments reduced while in prison — something not all states allow.

"We sent out a teaser postcard trying to combat the ostrich effect," says Emily Schmidt, a research analyst with the U.S. Administration for Children and Families, who helped with the Texas effort.

Schmidt says there was concern that someone going through the emotional transition of incarceration wouldn't likely be thinking about child support, and may not even open a letter from the state. So they printed the postcard on blue paper to stand out, and, taking a cue from marketers, it said, "Four easy steps to lowering your child support."

After 100 days, the response rate among parents was up 11 percent, "a very low-cost intervention for a fairly dramatic effect," Schmidt says.

The Obama administration wants to "right size" child support orders from the start, and has proposed regulations to make sure they are set according to what parents actually earn. Officials say some jurisdictions base orders on a full-time minimum wage, even if a parent earns far less. They say this can backfire, leaving so little money after a parent's wages are garnished that he or she quits and works underground instead.

The White House's proposals also would provide more job training for parents with child support debt — something Ron Haskins of the Brookings Institution says is a good investment.

So far, that's what's happened in Baltimore. The numbers are small. But the amount of child support that's been paid is more than double the amount of debt written off.

Maryland wants to expand its child support debt forgiveness program, hoping to help more parents to pay what they can.