Accessibility links
Ta-Nehisi Coates On His Work And The Painful Process Of Getting Conscious The writer, whose Between The World And Me was the winner of this year's National Book Award in nonfiction, talks about his process and the classmate and friend to whom he dedicated the award. 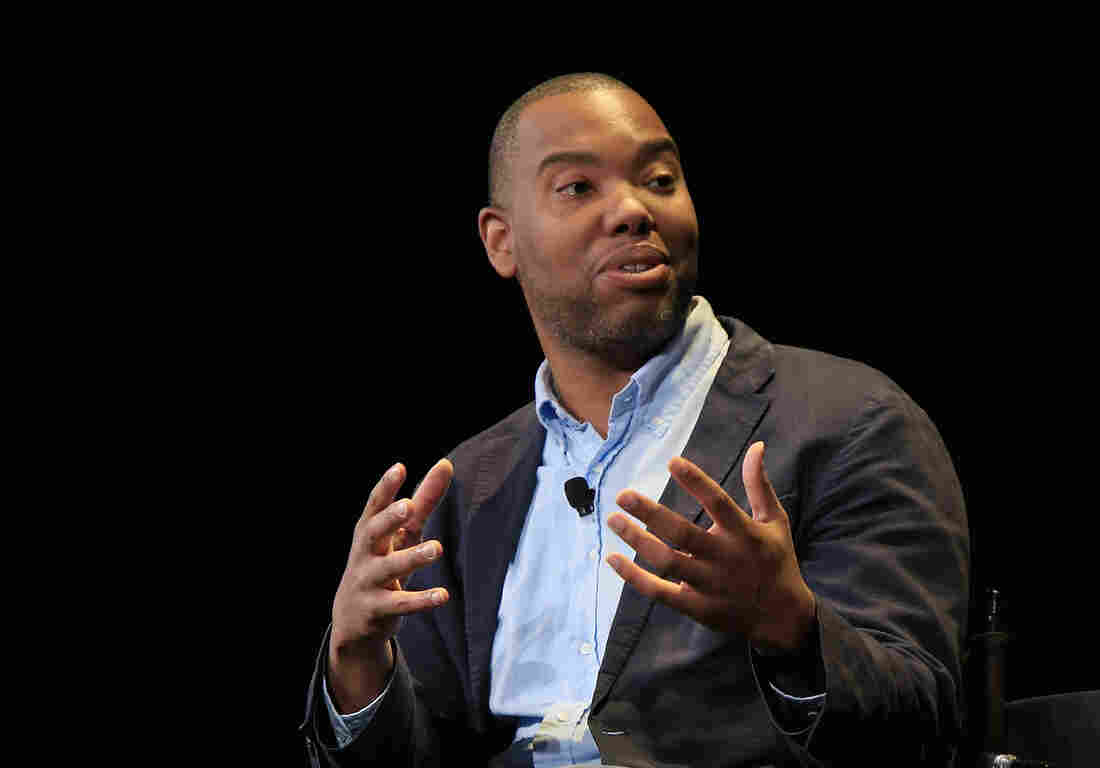 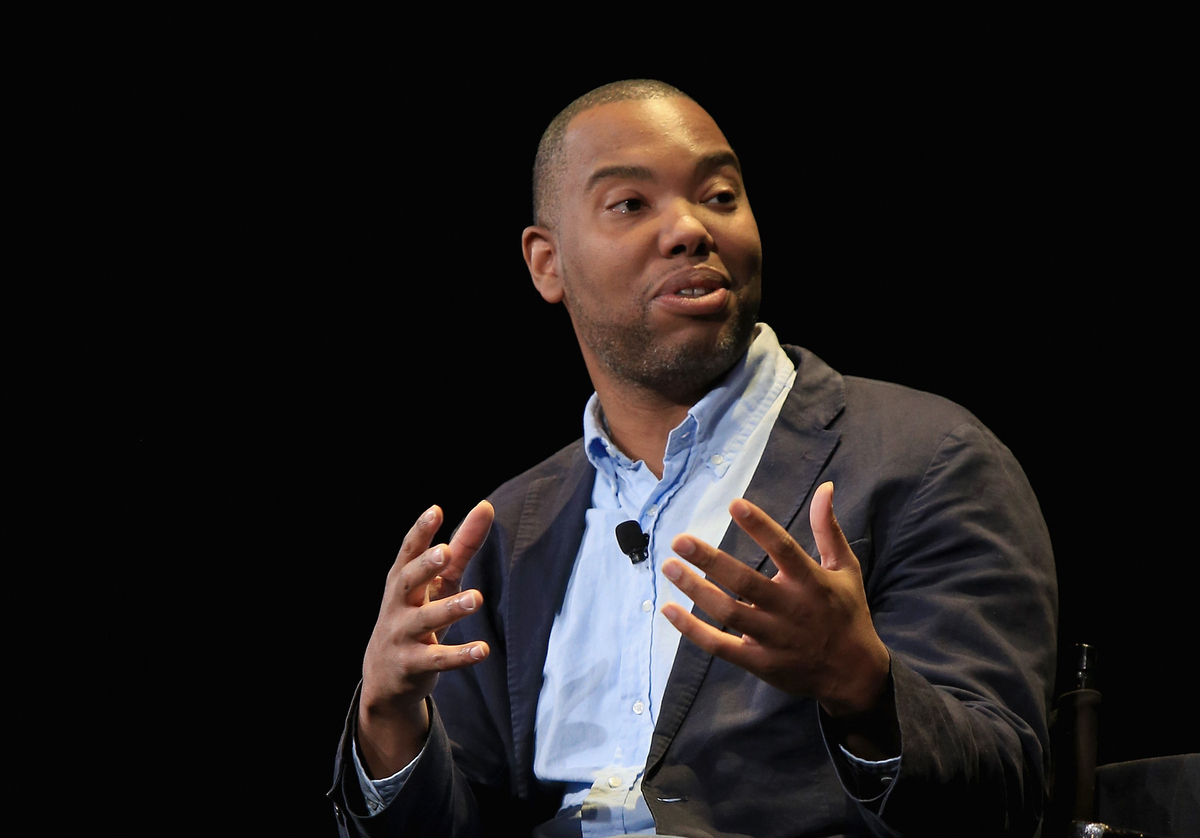 It has been quite a year for journalist and author Ta-Nehisi Coates:

All of which has taken place at a time when this country has been deeply engaged in questions about race.

Coates spoke with All Things Considered's Michel Martin by phone just as he was about to return to Paris, where he and his family have been living for the past few months.

About dedicating his National Book Award to Prince Jones

When Prince died, nothing happened. Nothing happened. The officer was not punished by his department, he wasn't prosecuted. ... And I had a young son at the time, and so it really, really bothered me — I'd always been aware about what could happen to me, but I was very, really very much worried about my son.

And so for 15 years I just stewed on this. And it really, really bothered me that people did not remember this young man's name. He just did not deserve to die the way he died, and it was completely forgotten....

There are two burdens of racism in this country. The first is the actual burden — you know, sort of socioeconomics that we see all the time, wealth gap, life expectancy, death rate, those sorts of things. But then there's another portion of this that folks ask you to accept, and that is the notion that somehow this is not really tied to our long history — really our 250-year, almost 400-year history — of policy directed toward African-Americans. That somehow this is our fault, or partly our fault....

Between The World And Me is my complete rejection of that idea. It may well be our responsibility, but it certainly is not our fault. Prince Jones bears no fault in how he was killed. None. Absolutely none.

He was not just killed by the officer, he was killed by the heritage of this country, which has for centuries dealt in the criminalization of black folks. And that allowed for the presumption that the son of a radiologist, a Howard University student with a daughter who had just been born, about to be married — that this man was somehow a criminal. It allowed for police officers to track him through three municipalities and kill him.

I just won't say that that was okay. I won't write that off as a mistake.

About the popularity and impact of his work

There is some group of Americans who are really, really curious to understand how we ended up at this point, where every week it seems like you can turn on your TV and see some sort of abuse being heaped on black people. But I don't draw the conclusion that it's, say, a critical mass of Americans who will go forth and create some sort of long-term policy.

I would like that to be true — that'd be beautiful — but I don't think one should confuse the book-buying audience, the audience that reads The Atlantic, with the entire country. It's a big country.

About how he writes

I try to be as direct as I possibly can. I don't attempt to make people uncomfortable; I think that my standards in terms of art and journalism always have necessitated my discomfort. The process of getting conscious for me was a very, very uncomfortable, disturbing and sometimes physically painful process. And so that's the standard to which I write, because it was what I've experienced over my time. ...

You take a work like, a book like Between The World And Me. As I said, I've been thinking about that for 15 years. Reparations and stuff I've done for The Atlantic mag, these are projects that I've really had — they come from living in the society and thinking and reading about things for a period of time. ...

I just went on this long thing about Prince, but see, I spent like years researching what happened in that case, you know what I mean? I talked to his mother, I met Prince's, his daughter, I've met his sister ... I knew Prince. Even as I sound strident in my rhetoric, it's actually rooted on having actually done some reporting around it.

I've been very, very careful to tell people what I am qualified to talk about and what I'm not qualified to talk about. And some of that has to do with black folks — black experience is big and it's nuanced and it's broad, and no one person should be the spokesperson for that experience, or no one person should be the oracle or be the articulator. And as I've told young people around the country, they should be skeptical of people who attempt to appoint themselves as that. I don't want that job at all.

I think you have a number of talented African-American writers — some young, some more experienced — who've done just brilliant work. Work that I've frankly depended on in my own writing. [Writers] who I think, taken together, can give us some sense of the nuance and the texture of the black experience. But you don't really want to get that from one person's work, and you certainly don't want to get it from one book.

On whether he still fasts on Thanksgiving

No! No, no! Although in recent years I've been thinking about bringing it back.

My dad, he preferred to use Thanksgiving as a day of reflection. And the main thing we had to reflect on was what had happened to the Native Americans, happened to the land that we live on now. And we would actually think about that. And I hated it when I was a kid — absolutely, absolutely hated it.

And then I stopped doing it as I got older. And then I had a family and I stopped doing it then, because I thought family traditions were very important. But as my son has gotten older — he's 15 now — and looking at my own work, and how important history and reflection and memory is in my own work, I don't know that it was such a bad idea. So I've often thought about going back to it.

On his father's reaction to his writing

This goes back to the first book — my rule has always been that he should understand what I'm doing before I do it. Because our relationship, to him and my mom, is way more important than any book. And so he's seen everything before it actually came out.

With the first book I told him what was going to be in there before I even wrote it, and asked him, was he cool with it? He said yeah, and I showed it to him. ... He read the second book too. He had changes, but none of the changes were about him. They were about things that he thought could make the book better. He's always been very, very firm in the notion that it's my story.