Accessibility links
'Black Dragon River' Charts History Along The Amur Dominic Ziegler's thrillingly thorough geo-history follows the Amur River from its origin on the Mongolian steppes, along the Trans-Siberian Railway and through centuries of Eurasian history. 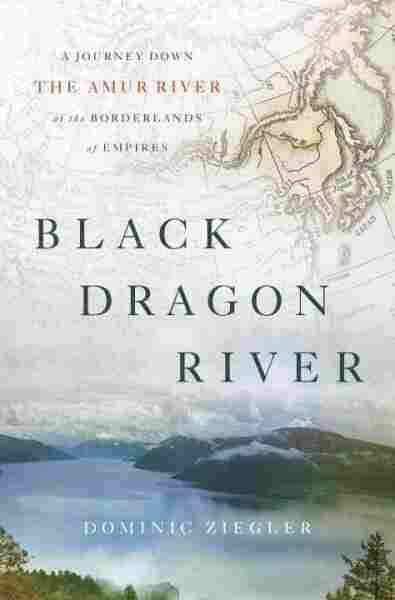 A Journey Down the Amur River at the Borderlands of Empires

"Here be dragons" warns a widely misunderstood inscription, originally in Latin, on a 16th century globe. The phrase has become a legendary reference to unknown pockets of the earth, where who knows what strange beasts lurk. But it turns out the globe in question probably wasn't warning against immense, fire-breathing winged creatures, but the Kingdom of Dagroian, described by Marco Polo as a place where "people feasted upon the dead and picked their bones." In other words, human beings are quite odd and ferocious enough. We need not go looking for mythic beasts.

The phrase comes to mind while plunging into the world author Dominic Ziegler explores in his thrillingly thorough geohistory, Black Dragon River: A Journey Down the Amur River at the Borderlands of Empires. No, there are no dragons here, unless they are carved on Buddhist temples. But that's all right, because the indigenous societies Ziegler turns up are absorbing on their own. The book is almost as sprawling as its title. Here be Genghis Kahn, here be Cossacks, here be "Evenki, Nivkh, Manchus, Daurians, Nanai, Solons, and Ulchi, to name a few; and then there were the Russians, the Chinese, the Japanese, and the Koreans."

If that quote from the book's prologue sounds like a mouthful, it is because proper nouns are the author's métier. A reader will wrestle with several capitalized constructs on any given page, whether they are place names, the names of historical figures, tribal nomenclature, or natural history terms coming along at a fast clip. Fight against the current and risk drowning. Flow with it, as the Amur flows, and there are countless enjoyable details to discover.

Ziegler, the former Tokyo bureau chief and Greater China correspondent for the Economist, set out to follow the entire course of the Amur. He begins on horseback, traversing the Mongolian steppe to the Amur's headlands at the Onon River, then boards the Trans-Siberian Railway through the villages and territories that have had such a complex and in many cases tortuous past. Black Dragon River presents Ziegler as both an amiable traveling companion and formidably erudite professor, serving up well-spiced anthropology.

The narrative relates the astonishing adventures of Genghis Kahn, whose Mongol soldiers in 1215 laid waste to the city that is now Beijing; Ziegler quotes a period source to tell us that the corpses of the slaughtered "formed whole mountains, and the soil was greasy with human fat." Cossacks followed, grabbing one-sixth of the world's land for Russia.

Fur drove Russia east along the Amur, in search of wolverines, weasels, foxes of red and blue, white and black coloring. (The czar demanded as a yearly tribute a sable pelt from every able-bodied male in Siberia.) Ziegler profiles the Decembrists, those romantic, upper-class revolutionaries who after a failed coup in 1825 were condemned by Czar Nicholas I to a Siberian settlement called Chita. Unlike the usual grueling penal colony, the exiles could bring their wives and live with their families.

The river's waters swarm with life. The Amur is home to a hundred-twenty fish specimens, "a primal soup, thick with wanton life and death. Myriad fish gorge on the tapioca pears of fish eggs caught up and down by the current. Ospreys and bears scavenge for dying fish in the shallows." Ziegler is at his best in such passages, when he leaves the dizzying flights of history to recount firsthand observations — like ending his 4,000-mile journey by taking an ancient Soviet hydrofoil toward the river's mouth on a freezing fall day, trading trinkets with a trio of inebriated helicopter pilots.

We might wish to follow in Ziegler's footsteps before the land he describes mutates beyond recognition. Currently the Russian Far East has seen environmental depredations on an unprecedented scale. The few remaining Siberian tigers, he writes, eat boar, and boar typically consume the mast that falls from the immense oak trees of the taiga, the deep Siberian forest. As an explosion of logging ravages the vast wilderness, boars starve and tigers disappear; Chinese takeout chopsticks, Ziegler tells us, are likely made from fallen Russian larch.

In this overexamined world, it's nice to know there are outer reaches that we can discover afresh. "As the long reel of the river's story turns," Ziegler writes, "many peoples flicker in and out of view as they move along the Amur's banks or float upon its waters." The Amur, in other words, means life.