Accessibility links
Before The Body Of A Child Saint, A Mother Struggles To Forgive Her Child The remains of St. Maria Goretti just finished a 54-city tour of the U.S. At the relic's final stop, in Oklahoma City, one widow went to seek the strength to forgive her husband's murderer — her son. 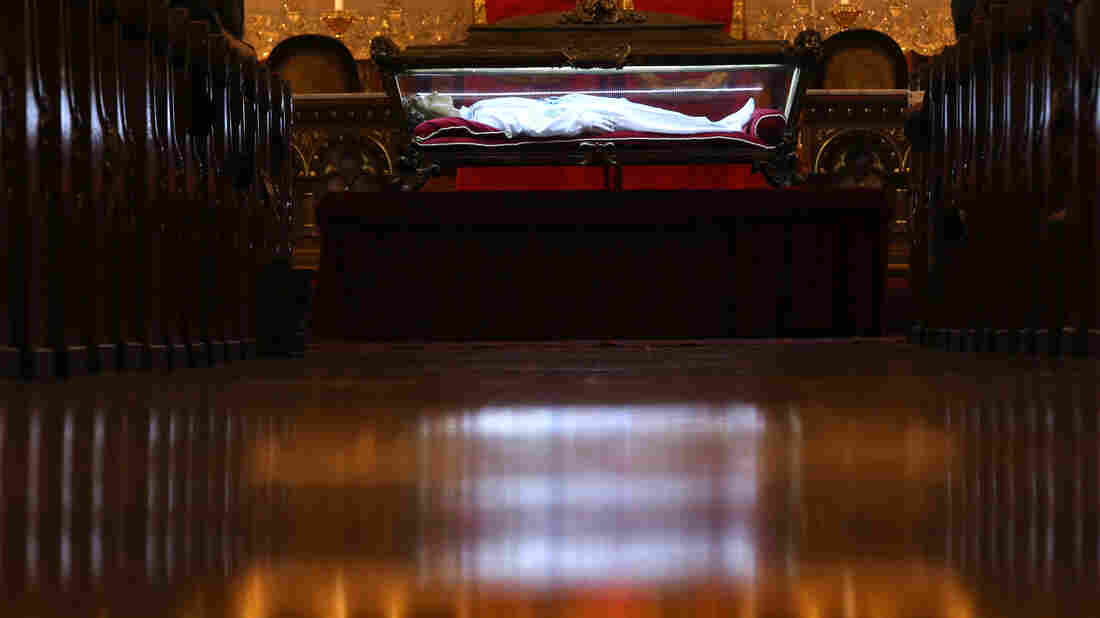 The remains of St. Maria Goretti lie near the altar during Mass at St. John Cantius Church in Chicago on Oct. 12. It was one of 54 churches where her body was exhibited during a U.S. tour. Antonio Perez/TNS/Landov hide caption 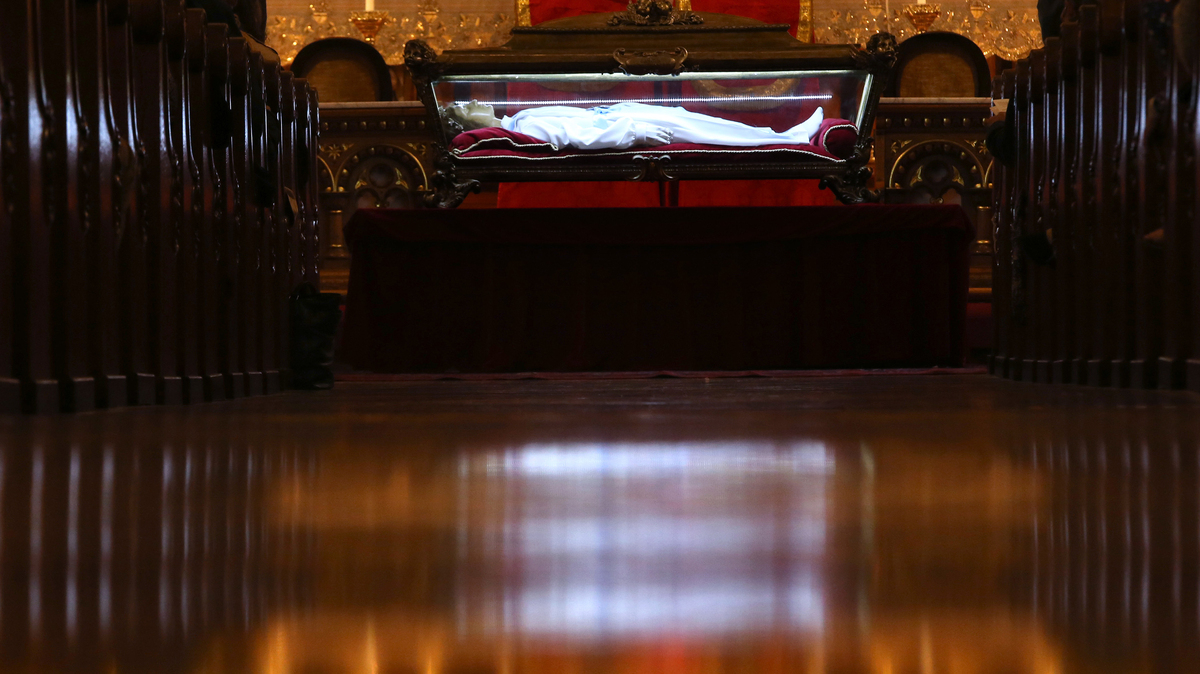 The remains of St. Maria Goretti lie near the altar during Mass at St. John Cantius Church in Chicago on Oct. 12. It was one of 54 churches where her body was exhibited during a U.S. tour.

The body of St. Maria Goretti, patron saint of purity and mercy, drew tens of thousands of the faithful to 54 American churches — from New Jersey to Illinois and Texas. It was the first time that the entire skeleton of a canonized saint — known in the Catholic Church as a relic — has come to the U.S.

Her bones, encased in a wax statue dressed in white, lay in a glass casket throughout the trip. People came to visit at each stop, standing in line, kneeling before the reliquary and holding prayer cards and rosaries against the glass.

In Oklahoma City, the saint was displayed in Christ the King Catholic Church, whose pastor is the Rev. Rick Stansberry, a priest who wears ostrich cowboy boots with his Roman collar.

"When I first thought about it, I must admit I thought, 'Well, that's a little bizarre, worshipping a body part,' " Stansberry says. "But then, the more I read about it, I realized we're not really worshipping the body part; we are venerating what that saint represents."

What Maria Goretti represents is forgiveness. The Italian peasant girl was murdered in 1902, when she was just 11 years old. Her assailant, a 19-year-old neighbor named Alessandro Serenelli, had tried to rape her. When she fought back, he stabbed her 14 times with a rusty file.

According to a film that played inside the church, she lived until the following day — and forgave Serenelli before she died. Serenelli later repented for the murder in prison and, when he was released, dedicated the remainder of his life to piety and service.

Maria Goretti was canonized as the church's youngest saint in 1950, joining a list of thousands of other saints.

For centuries, Catholics have turned to relics of the saints for intercessions and miracles. Note the bones of St. Peter, the head of St. Catherine, and the tongue of St. Anthony. Over time, some relics were discredited as fakes. The contemporary church, in general, doesn't pay them as much attention as did medieval Christians. But you wouldn't know that considering the 9,000 people who flocked to Christ the King church on Nov. 9 to venerate her remains. 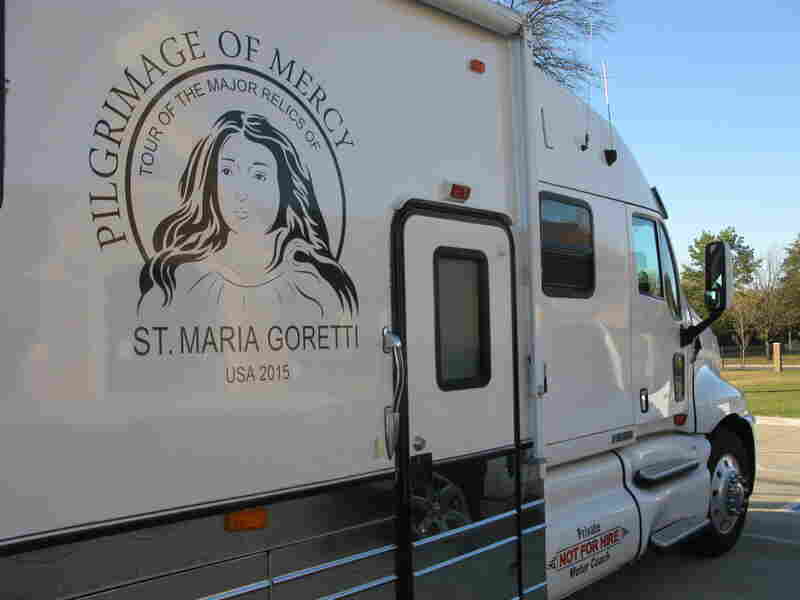 The remains of St. Maria Goretti were transported across the U.S. in this tractor-trailer. John Burnett hide caption 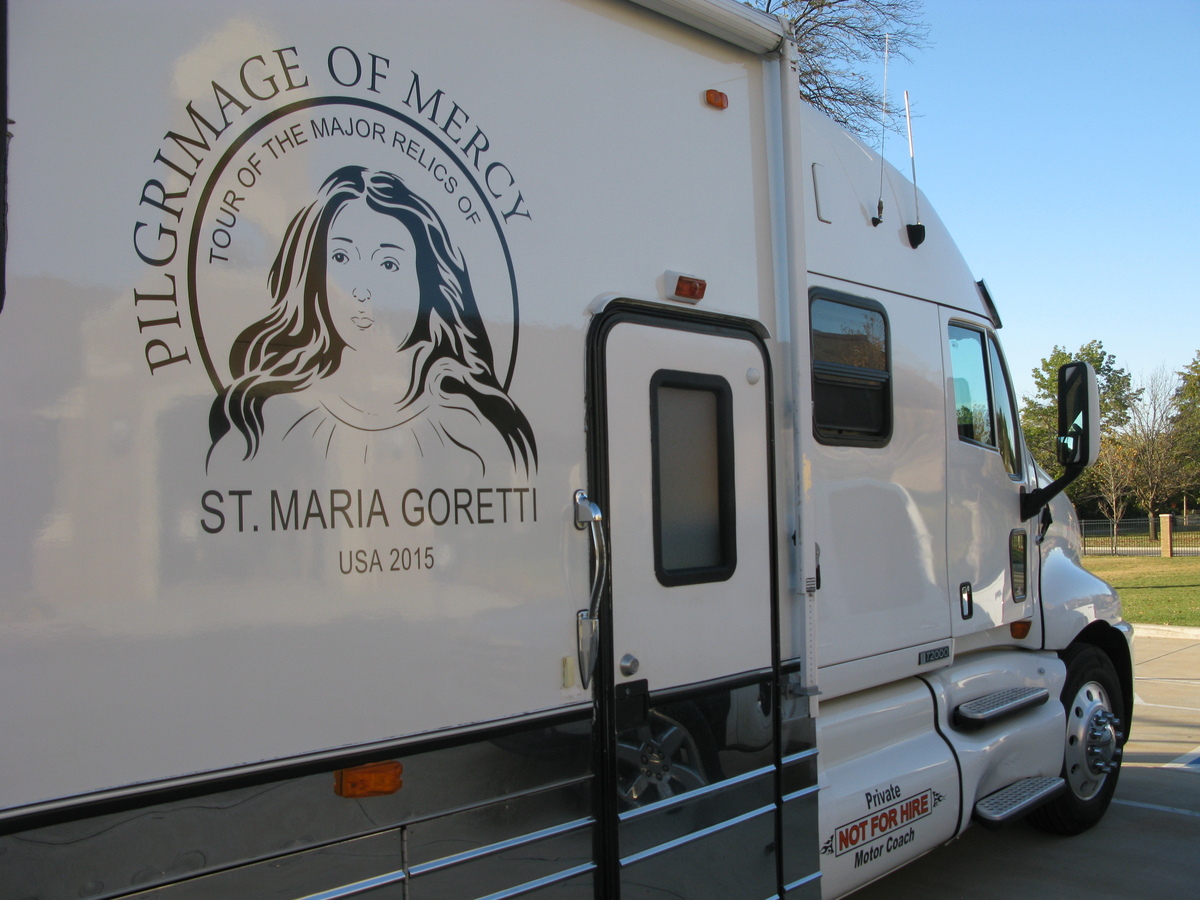 The remains of St. Maria Goretti were transported across the U.S. in this tractor-trailer.

"For the entire body of a saint to go on the road is something that only the Roman pontiff can authorize," says the Rev. Carlos Martins, a noted curator of relics for the Catholic Church. "It's very rare."

Martins put together the U.S. tour of St. Maria Goretti. He rode in the gleaming white tractor-trailer containing her remains as it lumbered across the heartland, to its final stop in Oklahoma.

"I like giving people an experience of God and certainly this is something that's out of the ordinary," Martins says.

Forgiveness is why Cathy Costello sought out Maria Goretti. A well-coiffed woman in her 50s, exuberantly friendly and deeply Catholic, Costello is the recent widow of Oklahoma Labor Commissioner Mark Costello. On Aug. 23, he was stabbed 17 times with a steak knife, killed at an ice cream parlor.

Cathy Costello witnessed the attack, and she held her dying husband. 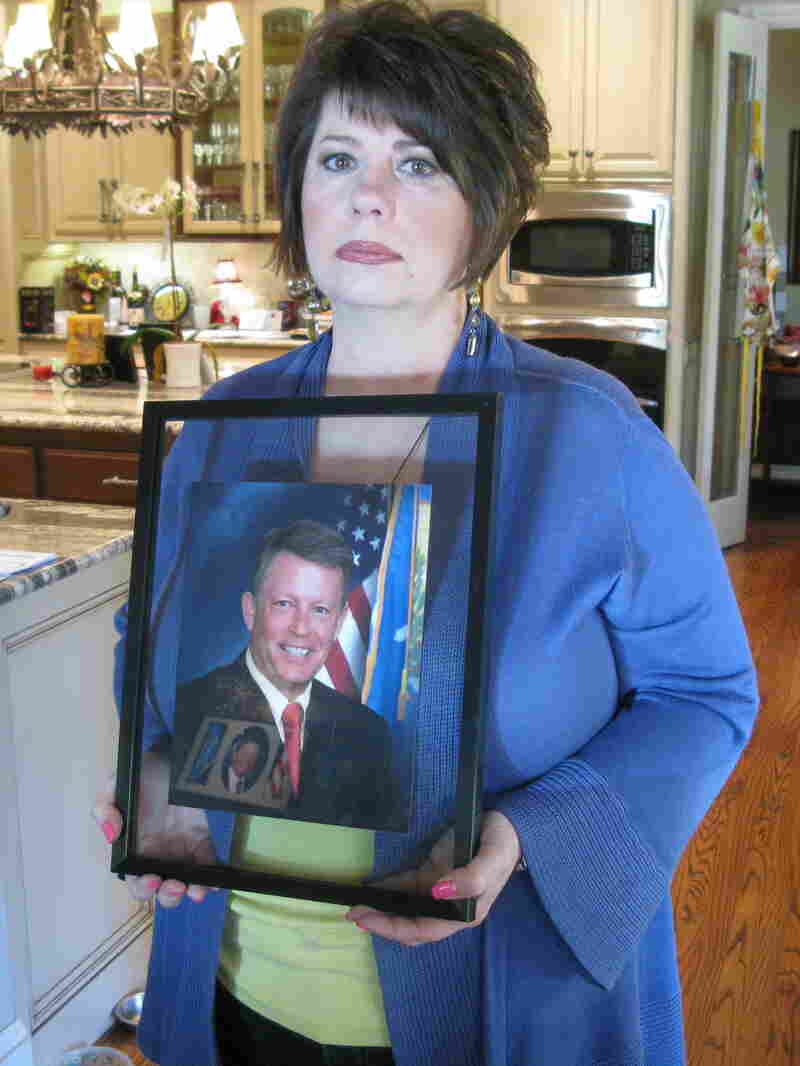 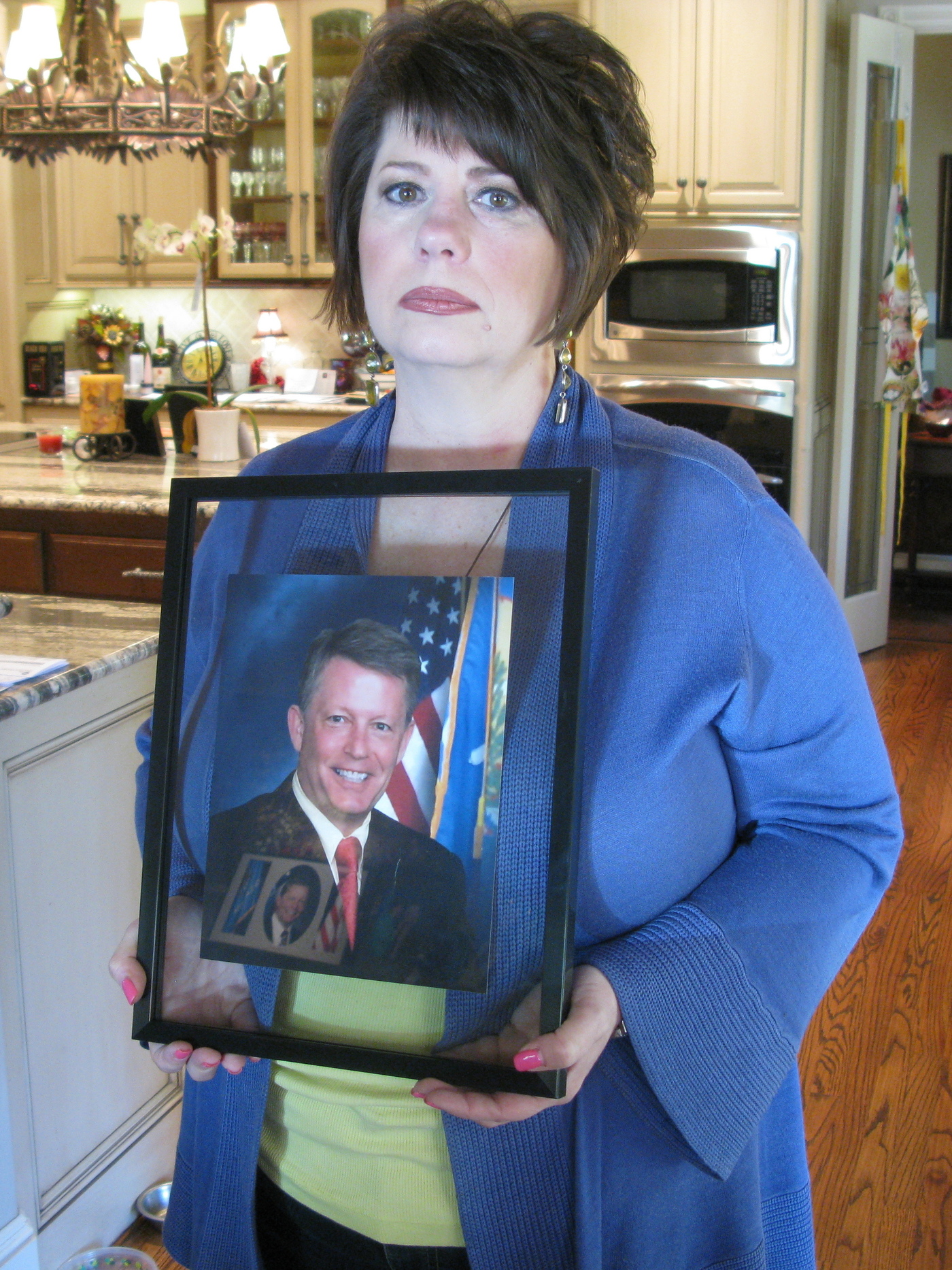 Cathy Costello, holding a picture of her late husband, Mark.

"I began to speak in his left ear, and I prayed the Hail Mary. 'Pray for us now and at the hour of our death,' " she says. "I asked God to forgive him of his sins. And I told him I loved him. And he died in my arms. It's an ugly death to see someone bleed out."

It's uglier still that the person arrested for the murder was her 26-year-old son, Christian. She says he has severe mental illness, that he had stopped taking his medication and had been having paranoid fantasies that his father was surveilling him.

She has been wrestling with her grief over losing her husband of 33 years, and with her feelings toward her son, who sits in the county jail charged with first-degree homicide.

"Why?" she asks, her voice cracking. "Why did you kill the one person that loved you more than no one else in the world? Why did you hurt our family like this? I know it's not logical because he has mental illness. But if I'm going to be honest with you, that's the internal struggle."

In the evening, after the interview, Costello and her other children planned to drive to their church to kneel before the child saint and pray.

"My family will be there with Maria Goretti," she says, "and I will ask her to help me forgive my son and to have some understanding about mental health."

Earlier this week, the mortal remains of St. Maria Goretti were returned to her crypt in Netunno, Italy.

Back in Oklahoma City, Cathy Costello is throwing her support behind legislation that would strengthen laws to get people with severe mental illness off the streets.