Accessibility links
'The Walking Dead' Makes Another Life-Or-Death Decision Sunday night's episode continued to explore when the show is and isn't willing to let characters go. 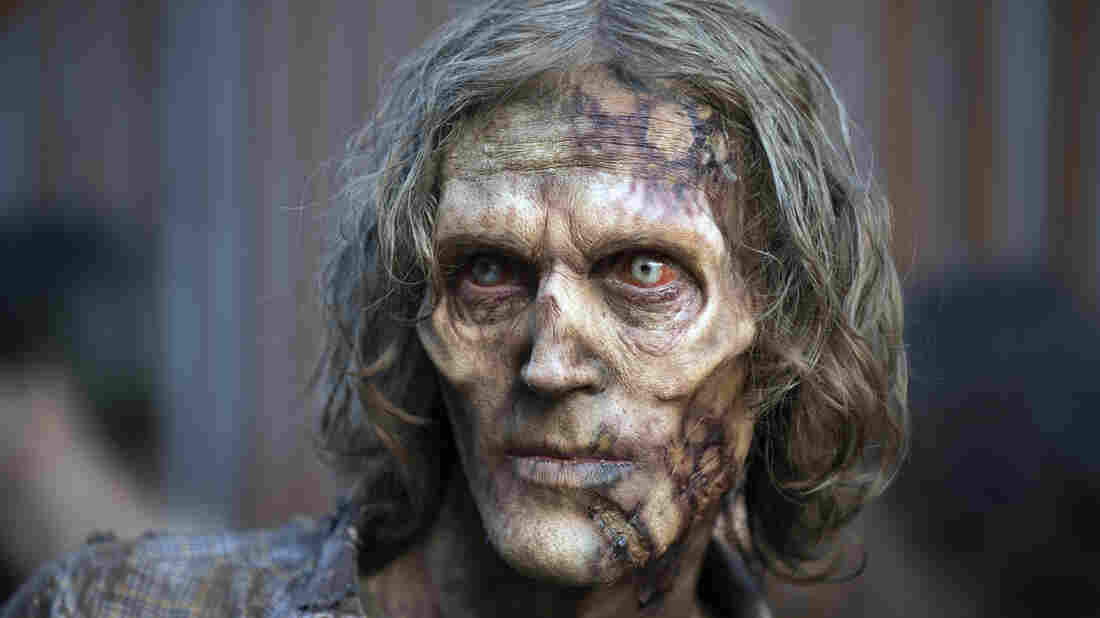 This walker is a spoiler-free representation of Sunday night's important episode of The Walking Dead on AMC. Gene Page/AMC hide caption 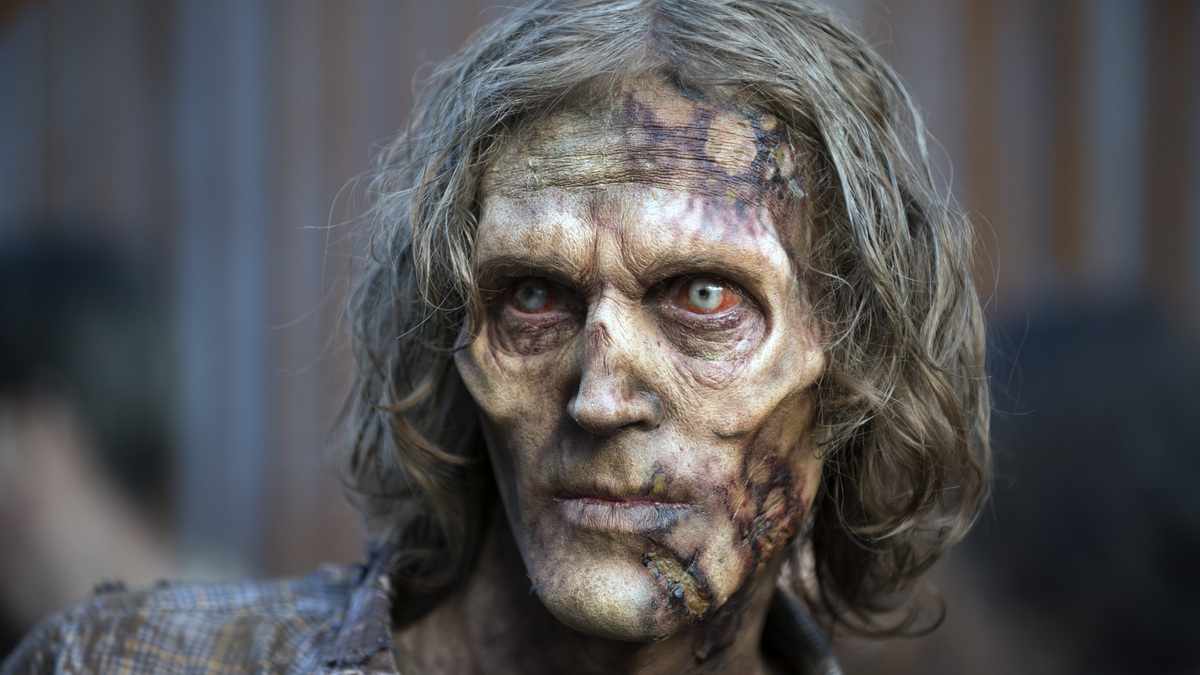 This walker is a spoiler-free representation of Sunday night's important episode of The Walking Dead on AMC.

It was the biggest head fake in recent television history.

Fans of The Walking Dead Sunday finally got an answer to the question that had been on their lips since late October, when long-running character Glenn Rhee was shown tumbling into a crowd of flesh-eating undead from the top of a dumpster with a hapless friend who had just shot himself.

What we saw last night was the simplest of explanations. As some sharp-eyed fans noted, Glenn was positioned under his suicidal buddy Nicholas when they hit the ground, so the "walkers" (Walking Dead never calls them zombies) tore Nick's body to shreds. Though the Oct. 25 episode made it seem Glenn could have been on the menu, too, it turns out that he simply pulled himself under the dumpster and waited until the crowd of walkers left, to emerge freaked out but largely unscathed.

This, of course, has freaked out some fans who have relished the show's ruthlessness in killing off major characters. Saving Glenn in such an obvious way makes the scene shown in October – and the weeks of "is he dead?" speculation the show encouraged – feel like the kind of desperate ploy a program might try in its sixth season to stay relevant.

The extent to which producers were nervous about faking out the show's devoted fan base was obvious during Sunday's post-episode analysis show Talking Dead. Host Chris Hardwick deftly avoided all but the briefest acknowledgement of fan anger during the show, focusing mostly on the joy that supporters of the character felt in seeing Glenn emerge alive.

That highlights a longstanding criticism of Talking Dead – that it's a vehicle for managing fan expectations and enthusiasm to benefit the series, rather than a real platform to dissect all the questions on viewers' minds.

"Sometimes good guys survive," said Steven Yeun, who plays Glenn, during Talking Dead. Showrunner Scott Gimple explained further: "The story we were telling is one of uncertainty...When they leave (their homebase), that could be the last time you see them. (His wife) Maggie didn't know what happened to Glenn, and I wanted the audience to be exactly where she was."

Mission accomplished. But at what cost?

On the Oct. 25 Talking Dead episode after Glenn's dumpster plunge, Lost executive producer Damon Lindelof noted how TV shows often have "unkillables" in their cast. These are characters whose storylines are so central to the series, they can't leave the program until the show is over.

The strength of the Walking Dead has always been the sense that very few characters are unkillable. Hero Rick Grimes, sword-wielding Michonne and arrow slinging hunter Darryl are surely among the toughest to remove.

But fans still had a sense, even if it was sometimes pretense, that the roster of unkillables on this show was smaller than many others. The reason: preserving the show's brutal sense of reality was more important.

Realistically, it's tough to imagine this head-fake harming Walking Dead's popularity in the short term. Many fans had already concluded that the character was alive. For my part, given how handily Glenn shatters stereotypes about Asian-American TV characters, I'm mostly just relieved to see he hadn't died in such a pointless way.

In the long term, however, the show has likely lost a little bit of credibility with fans. They now know how far the program will go to mislead them and avoid killing a favored character.

It's not the kind of move that sinks a series alone. But too many maneuvers like it will, especially if the thin line between masterful and manipulative storytelling is violated once too often.