Accessibility links
Vital And Tear-Jerking, 'Creed' Is The Best Rocky Movie Since 'Rocky' Terrific chemistry between Sylvester Stallone and Michael B. Jordan fuels the fine and stirring story of Apollo Creed's son, who takes after his dad. 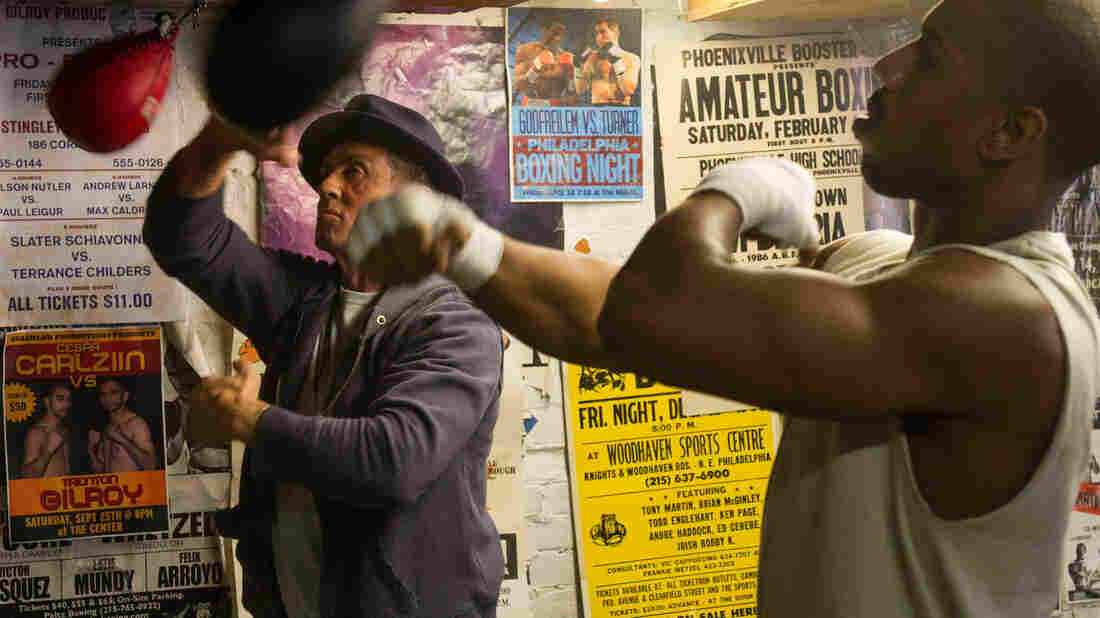 Sylvester Stallone as Rocky Balboa and Michael B. Jordan as Adonis Johnson in a scene from Creed. Barry Wetcher/Courtesy of Warner Bros. Pictures hide caption 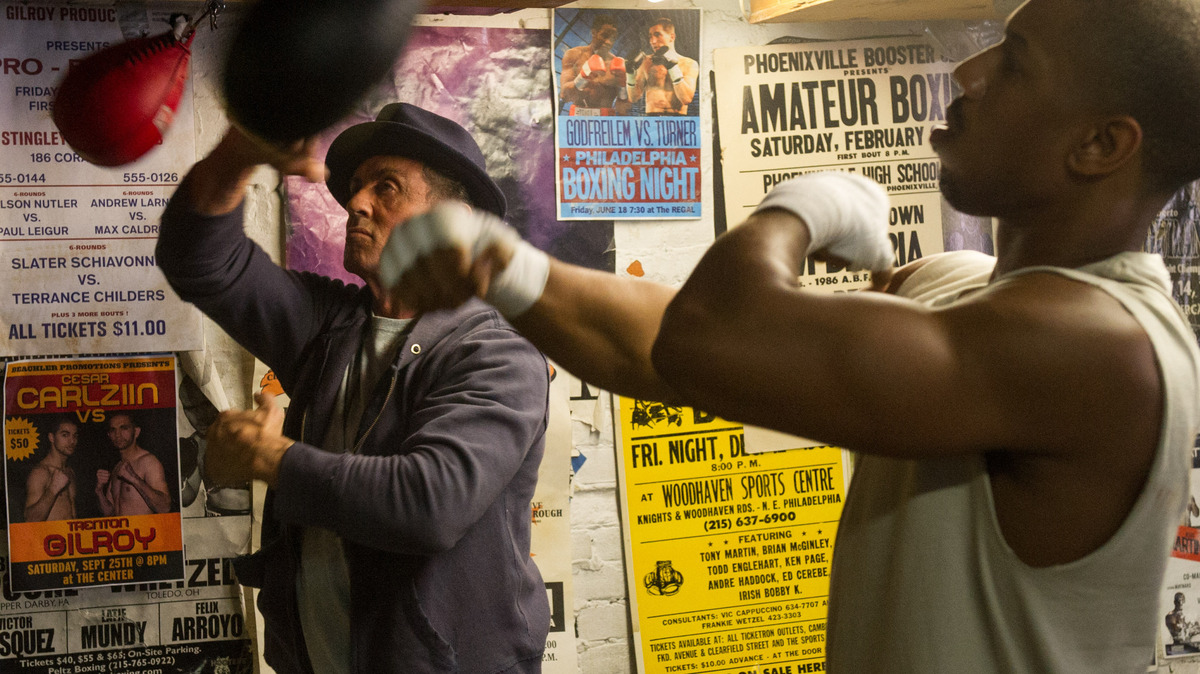 Sylvester Stallone as Rocky Balboa and Michael B. Jordan as Adonis Johnson in a scene from Creed.

Remember Rocky? That cornpone boxing movie from 40 years ago starring (and written by) that oiled-up, headband-wearing buffoon who talks funny? The one that stole Best Picture away from Network, All the President's Men, Taxi Driver, and Hal Ashby's rather more obscure Woody Guthrie biopic Bound for Glory?

Okay, on that last point, you're technically correct; on the rest, you're dead wrong. Rocky is one of those movies that's been retroactively devalued by its sequels. It's somber and observant, more about the day-to-day of a shy Philadelphia hood with a crush on the girl at the pet store than about boxing for the first hour of its 119 minutes. Here's the other thing you might not recall: Rocky loses his fight with Apollo Creed at the end. He "merely" survives the 15-round crucible, proving to himself he's not a coward or a quitter. Perhaps because of Bill Conti's intrepid score, Rocky's inspirational qualities have tended to overshadow its existential ones, but they're equally vital.

Of its sequels, only 2006's Rocky Balboa had humility and brio in something like the same proportions as the original. Arriving 30 years after we first saw Rocky huff his way up the steps of the Philadelphia Museum of Art, it was a meditation on loss and mortality and raging against the dying of the light (though writer-director-star Sylvester Stallone was kind enough to leave Dylan Thomas unmentioned). As Rocky puts it in the marvelous new Creed: "Time takes everybody out. Time's undefeated."

He's speaking to Adonis Johnson (Michael B. Jordan), the illegitimate son of his opponent-turned-pal Apollo Creed, who died in the early rounds of 1985's Rocky IV. (You're an educated person; surely you've seen these movies and read them in the original Greek.) In a prologue set in 1998, Creed's well-off widow (Phylicia Rashad) rescues the combative young Adonis from a Los Angeles juvenile detention center and adopts him. In the present day, "Donny" is a college-educated man with a good job and a bright future. But he is his absentee father's son, competing in unsanctioned fights in Mexico on the sly.

When he decides to go pro, he can't get anyone to train him. The last 15 years of his life have been luxe; no one, including his adopted mom, thinks he's hungry enough to survive in the ring. So he packs himself off to the City of Brotherly Love to look up Rocky. Donny never knew his old man, but so powerful is his craving for one that right away he's calling Rocky "Unc," as in Uncle—which feels about as natural as if he were addressing this old white dude he's just met as "Italian Stallion." (This is Creed's hardest-to-swallow turn. If you can get past it, you'll probably love the movie as much as I did.)

Rocky wants no part of this. When he's not at the little Italian restaurant he named for his wife Adrian, who succumbed to cancer sometime after Rocky V, he's at the cemetery where she and his brother-in-law Paulie are buried, reading the paper aloud to their headstones. He's at peace knowing his life will follow this humble pattern until it ends. But not completely at peace, because—surprise!—eventually he agrees to give Donny a few tips.

You wonder if a similar lobbying campaign took place off-screen. This is the first Rocky flick Stallone neither wrote nor directed. He's entrusted his beloved creation to Ryan Coogler, the 29-year-old black filmmaker whose sole, stunning prior feature was Fruitvale Station, a fact-based drama about the 2009 killing of an unarmed-and-handcuffed black man named Oscar Grant by a white police officer in Oakland, California. (Jordan played Grant.) At first glance, this looks like yet another case of a promising artist with a strong but still-developing voice getting drafted into the Franchise Wars...

...which I'd probably wring my hands over a whole lot more if Creed were not so against-all-odds wonderful. It's a warm-hearted, patient, unabashedly tear-jerking drama, one that gets its juice not from the training montages (though they're stirring) or the bouts (though they're convincingly performed and excitingly shot) but from the remarkable chemistry between Jordan and Stallone. Tessa Thompson is great, too, as a musician suffering from degenerative irony—sorry, I mean "gradual hearing loss." But her nicely slow-moving courtship with Jordan is only the movie's secondary love affair.

Jordan is already much more famous than Stallone was when Rocky snagged him a Best Actor nomination in 1976. His character, Donny, is handsome, educated, and brimming with confidence—Rocky's opposite in every respect save for his drive to prove himself.

The alter ego that gave Stallone a career has always been the one that most resembles him offscreen. Just like Rocky Balboa, Stallone became a huge, unlikely star, but handled his success poorly. He allowed his vanity to speak louder than his talent. For a long time, he kept trying, writing and directing ambitious clunkers in between Rocky and Rambo sequels. But audiences never embraced his more challenging stuff. Eventually he threw up his hands and made only films he must've known were garbage, for years on end.

While Creed is not exactly Stallone's Unforgiven, it certainly benefits from the weariness and regret in his face, which somehow seems at last to have wrinkled away the strange uncanny-valley aspect of his appearance that has fueled so much speculation about plastic surgery. Whether the credit goes to the director or the actor or both, this is the performance of Stallone's career, one in which that age-defying orange body stays covered up but his sadness is in full view.

While one hopes Coogler won't stay in franchiseville after Creed, he can feel good about having made an honorable, heart-tugging crowd-pleaser that should attract a more diverse crowd to the series while satisfying older fans with the best Rocky movie since Rocky. The last half-year has seen films like Jurassic World, Terminator: Genisys, and Spectre so busy paying homage to their forebears that any new tricks they might have get upstaged. Coogler perfectly threads the needle between innovation and reverence, keeping the familiar Rocky signposts—the Conti theme, the training montages, those museum steps—present, but recontextualized.

He puts his own stamp on the series' obligatory scenes with a training sequence that is almost a dance number, wherein neighborhood kids ride their motorbikes and four-wheelers alongside Donny as he's running. They form a circle around him as he leaps into the air, imagining his victory. There's a lot of movie left after this, but the emotional climax is right here. They've always peaked early, these Rocky pictures; with Creed, the series peaks again.