Accessibility links
India's Quandary: Climate Change And Coal Coal is king in India. Some say there's little alternative. So how can this country, the world's third-largest polluter, provide energy and lift millions from poverty while trying to become "greener"? 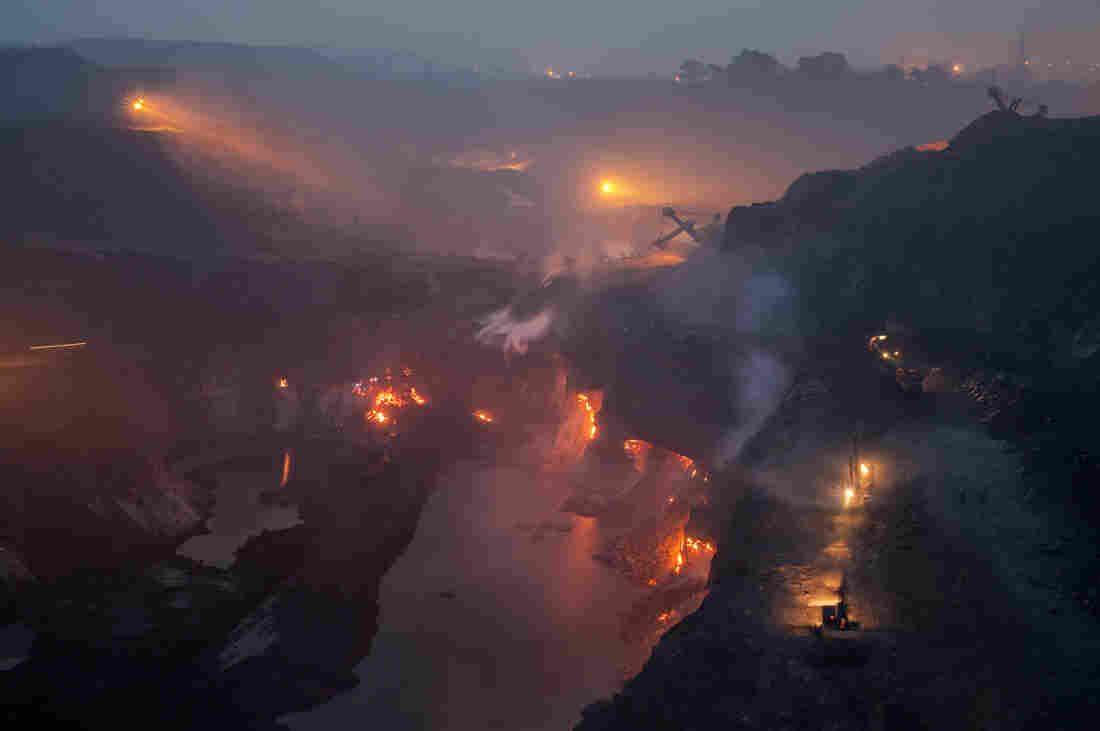 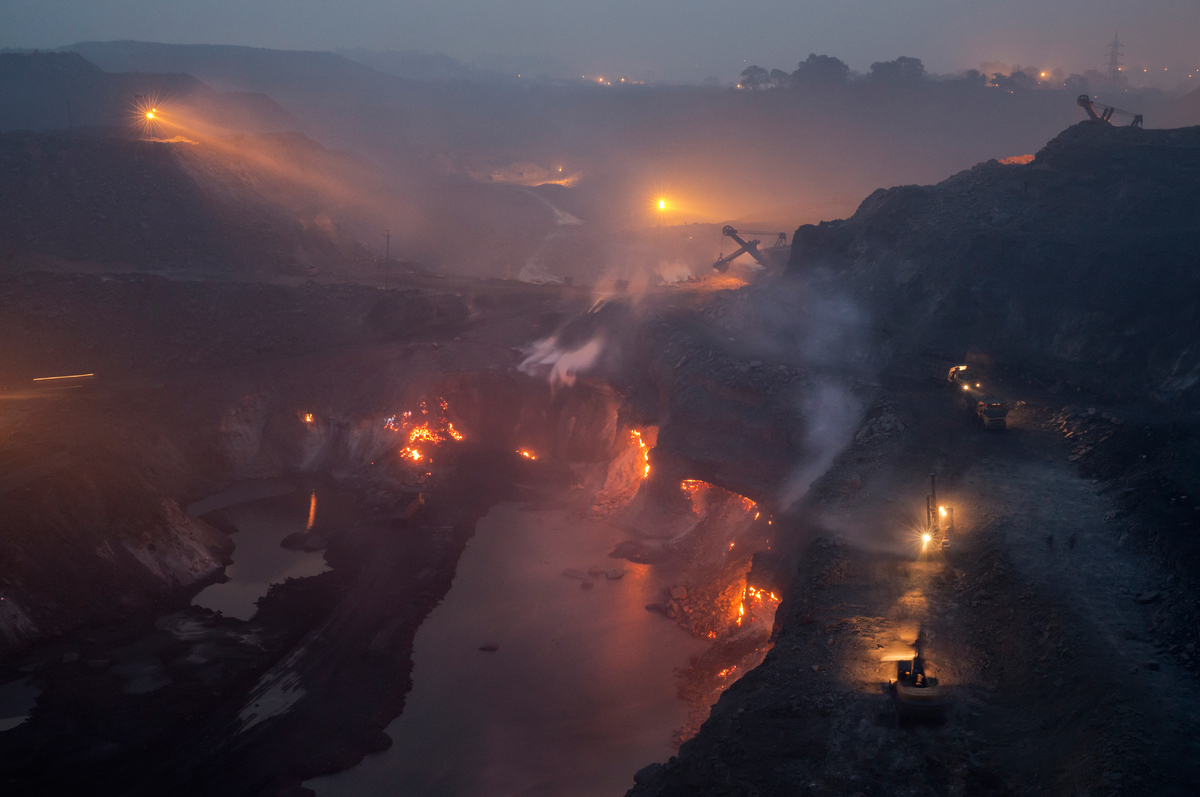 Coal fires burn early in the morning in January 2014 at a privately owned coal mine in India's Jharkand state, making the air dense with noxious smoke and dust. Forty percent of India's mineral wealth lies in Jharkhand.

Conjuring images of a dystopia, the shroud of bad air blanketing New Delhi in recent weeks has intensified global pressure on India to curb its greenhouse gas emissions.

India will arrive at the climate change summit in Paris next week as the third biggest generator of fossil fuel pollution blamed for warming the planet, after China and the U.S.

Half of India's emissions come from burning coal. A visit to the coal-rich northeastern Indian state of Jharkhand reveals how this stands to get even worse.

And yet India intends to triple its production of coal by 2030, extracting rich seams of "black gold" from cavernous open-cast pits. Coal-burning power plants supply 65 percent of India's energy today. The country has only limited reserves of natural gas, a cleaner fossil fuel. 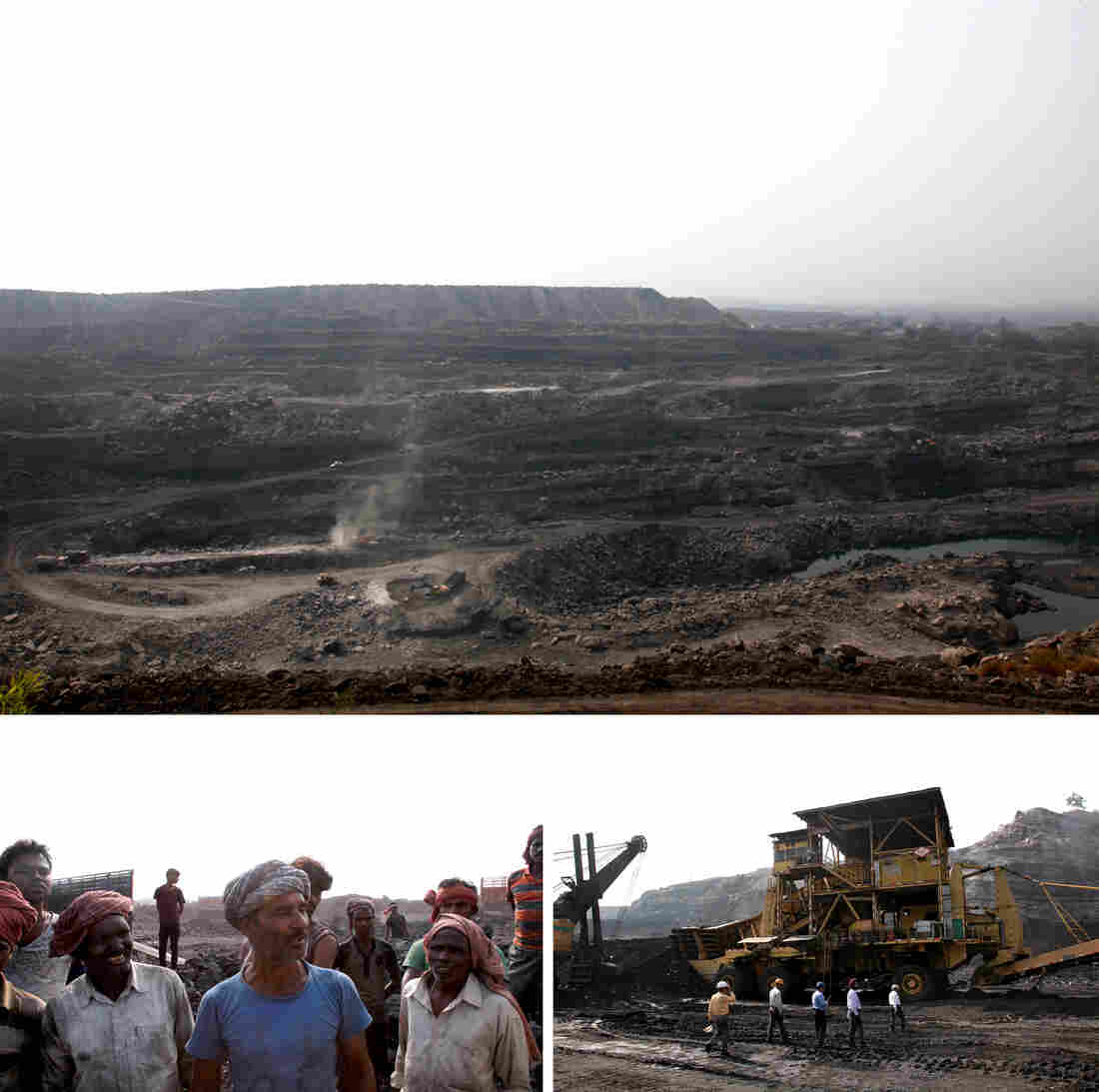 Indian law requires mines to reforest twice the land denuded by surface mining, top. Loaders, bottom left, are employed to lift heavy chunks of coal onto trucks, dangerous work that exposes many to toxins. At right, employees of Central Coalfields, Ltd., stand near an in-pit crusher used in open cast mining. Open pits cost a third of underground mining, but cause more damage to the environment. Julie McCarthy/NPR hide caption

A ramped-up reliance on the most carbon-intensive fossil fuel presents the country with a profound dilemma. A third of the world's poor live in India, and the country needs massive energy to fuel new industries and jobs to pull millions out of poverty. India also needs to extend electricity to 300 million of its citizens living without it.

But coal and its byproducts are hazardous to public health. Even a brief stay in the cities of the Jharia coal mining area takes a toll. Smoke from its many coal fires burns the eyes and stings the throat. Soot covers homes and clings to forlorn-looking cows grazing on land that backs up to the coal fields.

But to meet the power need, India is opening a new mine on average every month.

Coal India Limited, a government behemoth, mined 500 million tons of coal nationwide last year. We watch as operators at one of its open-pit coal projects dynamite the side of a terraced canyon that's so deep, the trucks below look like Tonka toys.

We crunch over row upon row of neatly piled deposits of coal that stretch across the land like a farm at harvest. Charan Singh, the general manager of this Central Coalfields, Ltd., project , steps over the ridges and proclaims, "We're cropping coal here. This is a coal field."

Singh explains how machines cut away surface rock to expose the coal seam that is then pummeled into compact chips. He says the crushing directly at the source saves steps, is more energy efficient and shrinks the operation's carbon footprint. In one year, Singh proudly says, he has reduced the footprint of two mines by 5 percent and 7 percent. 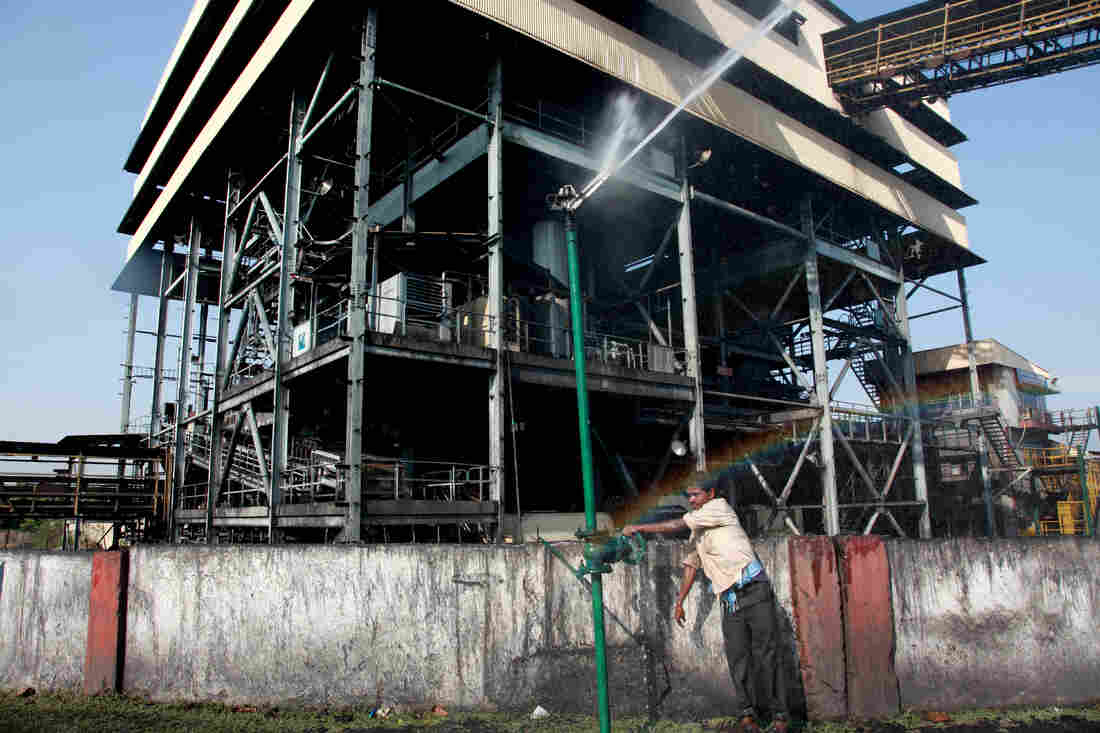 At the Piparwar Open Cast Project outside Jharkhand state's capital city, coal is watered down at a "washery" as an environmental measure. Indian coal has a high ash content, and washing the coal reduces pollutants that are released into the air during transport. Much of India's coal is transported unwashed. Julie McCarthy/NPR hide caption

But is that progress too modest?

"World," says Singh, "be patient, because you have progressed but we still require time. We're increasing the production and reducing the footprint. You cannot say we are not taking action. We are taking action."

One big test will be reforestation: By law, Indian mining companies, the bulk of which are state-owned, must replant twice the amount of land that is exploited for open-pit operations. Coal India says says it is reforesting 2 1/2 times the acreage it is has diverted for mining and planted more than 73 million trees. 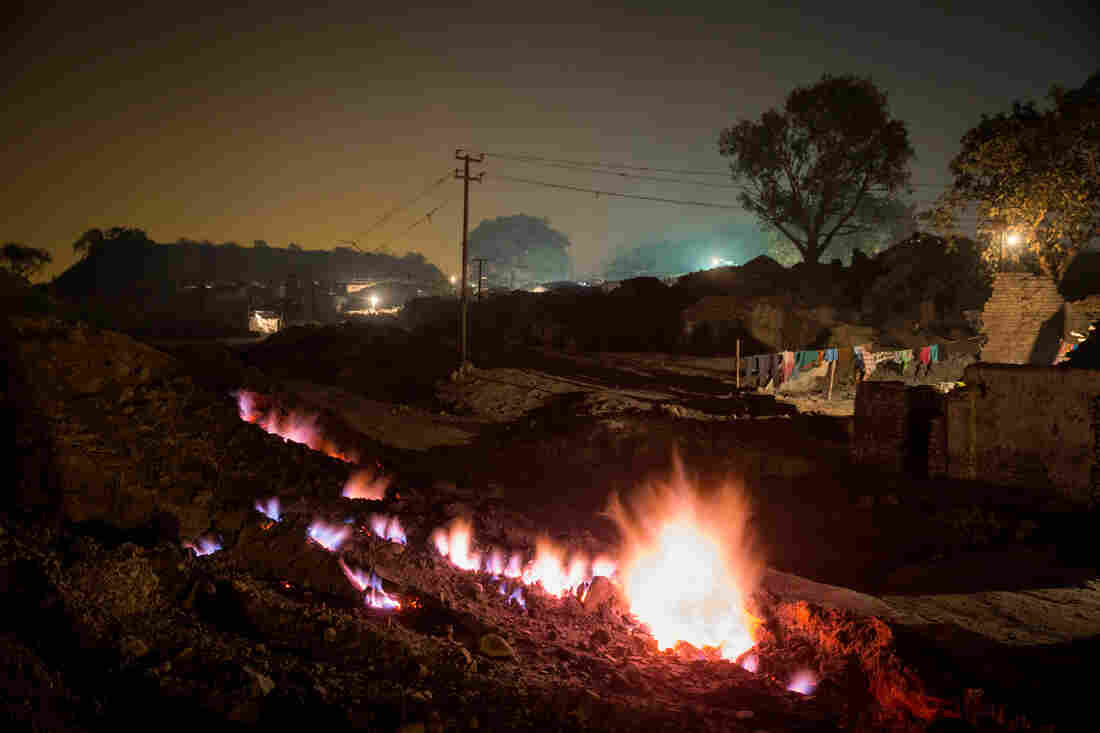 An underground fire has been burning for at least a century, according to villagers in Boka Pahari, on the outskirts of Jharia city. The fire, shown here in 2014, is some 200 yards from the village and is said to have started when abandoned coal mines were not properly closed. Johnny Haglund hide caption 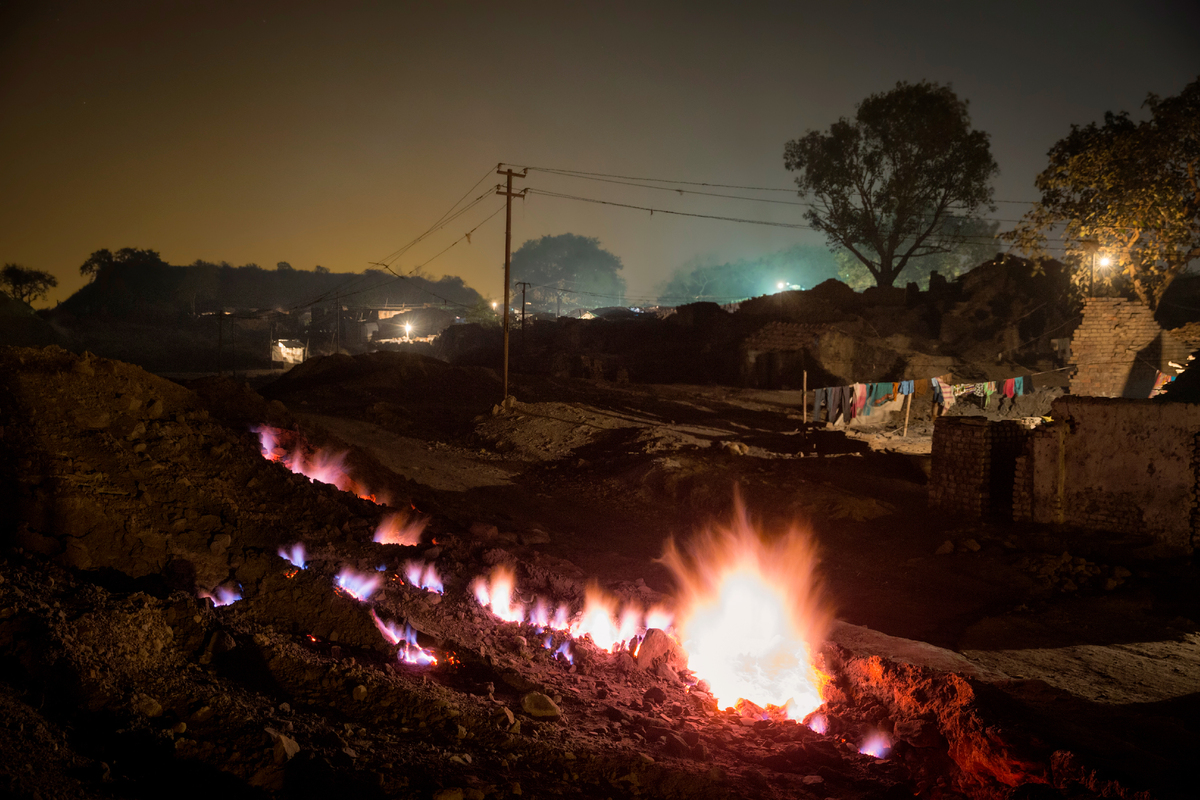 An underground fire has been burning for at least a century, according to villagers in Boka Pahari, on the outskirts of Jharia city. The fire, shown here in 2014, is some 200 yards from the village and is said to have started when abandoned coal mines were not properly closed.

Anil Swarup, Secretary of India's Coal Ministry, says the country is committed to switching to cleaner energy as part of its pledge to the U.N. Climate Convention. India set an ambitious target of 100 gigawatts of solar energy by 2022, a nearly 25-fold increase from its current solar capacity. Not even Germany, the world leader in solar energy, has built up its capacity that swiftly. Swarup says by 2030, coal will make up just 45 percent of India's power generation.

But until renewables are more widely available, coal will remain king, says Swarup.

"No one would want coal to happen," he concedes. "Coal is happening because that is the only alternative available with us at this point in time. Until there is an answer available, how do you suddenly stop mining coal? You can't."

Meanwhile, aging, inefficient thermal power plants only deepen India's predicament. Kameswara Rao, the lead energy, utilities and mining analyst with PricewaterhouseCoopers India, says in the last estimate, from three years ago, almost 25 percent to 30 percent of the plants "were of a vintage that needed to be shut and entirely retrofitted."

Rita Devi, 40, left, lives dangerously near coal fires in Boka Pahari village and says her son recently died of cancer. Her district suffers some of the highest incidence of chronic disease in the state. The government is evacuating residents but many fear losing their livelihoods. A woman, right, makes charcoal briquettes outside her home to sell as fuel for cooking and heating. Julie McCarthy/NPR hide caption

But, he says, there is "an active push to have all the new power plants [be] super-critical," meaning they'll produce more power with less coal and with lower emissions. India says funds and technology from the rich, developed countries would speed that transition.

The affirmed goal for negotiators in Paris is to keep global temperatures from rising 2 degrees Celsius (3.6 degrees Fahrenheit) through the end of the century. But India opposes efforts to obligate countries, especially developing economies, to reduce their greenhouse gas emissions.

Coal Secretary Swarup says that per capita, India releases 1/12 the heat-trapping gases the United States does, and forcing Indians to cut emissions would unfairly penalize them.

"Per capita consumption of energy of this country is [at] the levels of 19th century U.S.," Swarup argues. "And yet everyone is looking at India as if India is trying to not accept their responsibility. We are indeed accepting our responsibility. But what has to be understood very clearly is the requirement for the development of this country."

For now, the imperative to develop appears to have eclipsed the need to protect India's environment.

The air in many places is foul; the water undrinkable. The World Health Organization says air pollution is now the world's single largest environmental health risk, responsible for 7 million premature deaths a year. Thirteen of the world's 20 most polluted cities are in India. 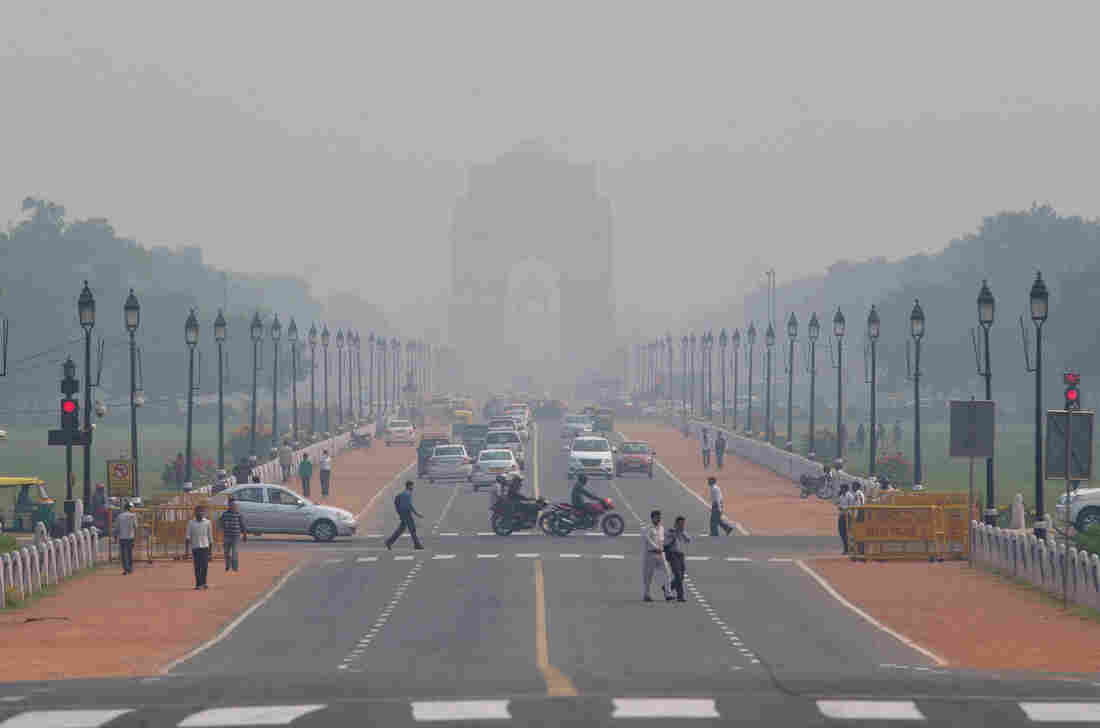 New Delhi's air is the worst in the world today, WHO says, with cars and trucks the heaviest polluters. In recent weeks, the potentially lethal "small particulate" air pollution that lodges deep in the lungs reached levels beyond anything seen in the city previously.

Meanwhile, rising temperatures mean India's Himalayan glaciers are melting and its farmland is becoming arid — all in the midst of unpredictable, often extreme weather.

"We're getting unseasonal rain, we're getting hailstorms, we're getting frightening developments which are impacting our farmers," says Sunita Narain of New Delhi's Centre for Science and Environment. "This is happening not even at [a temperature increase of] 2 degrees [Celsius]. It should scare us!"

In other words, climate change has already arrived in India and needs urgent attention. As Rao says, "It's not a question for 2030, it's a real and present question for today."