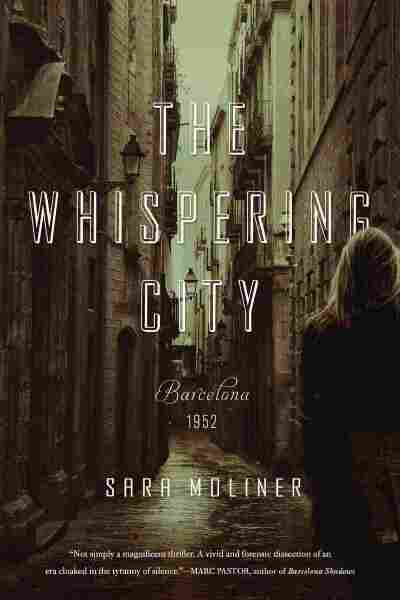 What do you get when two academics from Frankfurt collaborate on a mystery novel set in mid-20th century Spain?

You might think the answer is "one snoozer of a read," but you'd be dead wrong (apologies; it is a mystery, though). The Whispering City: Barcelona 1952, written under the pen name Sara Moliner, depicts a time and place so perfectly that the central mystery of who killed socialite Mariona Sobrerroca almost seems beside the point.

Rosa Ribas, who teaches at Frankfurt University and has published six novels in her native Spain, wrote The Whispering City with her former university colleague Sabine Hofmann, a philologist. Early on in the story, it was easy to tell that Ribas was probably responsible for the chapters featuring young journalist Ana Martí Noguer and Hofmann for those focused on Ana's older cousin Beatriz, a professor whose career has been stalled due to her leftist associations — the alternating chapters have different tones and pacing. However, as the women's stories intersect and intertwine, the writing grows tighter and more seamless.

Knowing about how the novel reads means something because once you've managed to map all of the characters and their complicated, gorgeous Catalan names ("Oleguer Pons," "Jaime Pla," and "Conchita Comamala," to list just a few), you'll be drawn into their rigid, Generalissimo Francisco Franco-led universe. The mental sepia tones evoked (and used on the cover — good job, Pegasus designers!) aren't just those of vintage photographs, but those of a city blanched of its color and vivacity by a right-wing regime.

Ana (or Aneta, as Beatriz and other family members call her) works at La Vanguardia, a newspaper valiantly attempting to stay one step within the limits the authorities impose. When her editor Mateo Sanvisens assigns her the task of investigating Sobrerroca's death, he's just trying to appease those authorities — the prosecutor hopes an article will reflect well on "the forces of order."

Unfortunately for him and happily for the reader, Ana smells a rat — literally, at the murder scene, and figuratively, in the person of nasty Inspector Isidro Castro of the Criminal Investigation Brigade. As she realizes that she needs help deciphering a piece of evidence, she happens to attend a family funeral and meet her cousin. The two women join forces and enlist Beatriz's brother Pablo to help them as well.

However, what gives this historical gem its shine is Ribas and Hofmann's quiet but insistent focus on the women of Barcelona, of every age and type. One of the most vibrant characters is Encarni (short for "Encarnacion"), Beatriz's loyal, stubborn housekeeper, who lives in hope of winning an electric refrigerator to replace the apartment's leaking wooden icebox. Ana and Beatriz's fervor to find the dead woman's killer is kept lit by an internal recognition of their cultural fate. When Ana's boss tells her, at one point during the investigation, "We aren't in a position to negotiate," she knows she isn't: "A woman, and a rookie. As soon as she was married, if she married, her husband could forbid her from working. No, she wasn't in a position to demand, or expect, anything. So she just asked 'What now?'"

Fortunately for demanding mystery readers, we can expect another Barcelona 1952 novel sometime in the next year or two. Will it feature Ana and Beatriz again? You'll have to finish The Whispering City in order to hazard a guess.