Accessibility links
Kyoto Treaty Fizzled, But Climate Talkers Insist Paris Is Different The 1997 Kyoto treaty set targets for cutting greenhouse gas emissions that many nations didn't meet. This time, stakes are higher and all countries will be asked to set and meet their own limits. 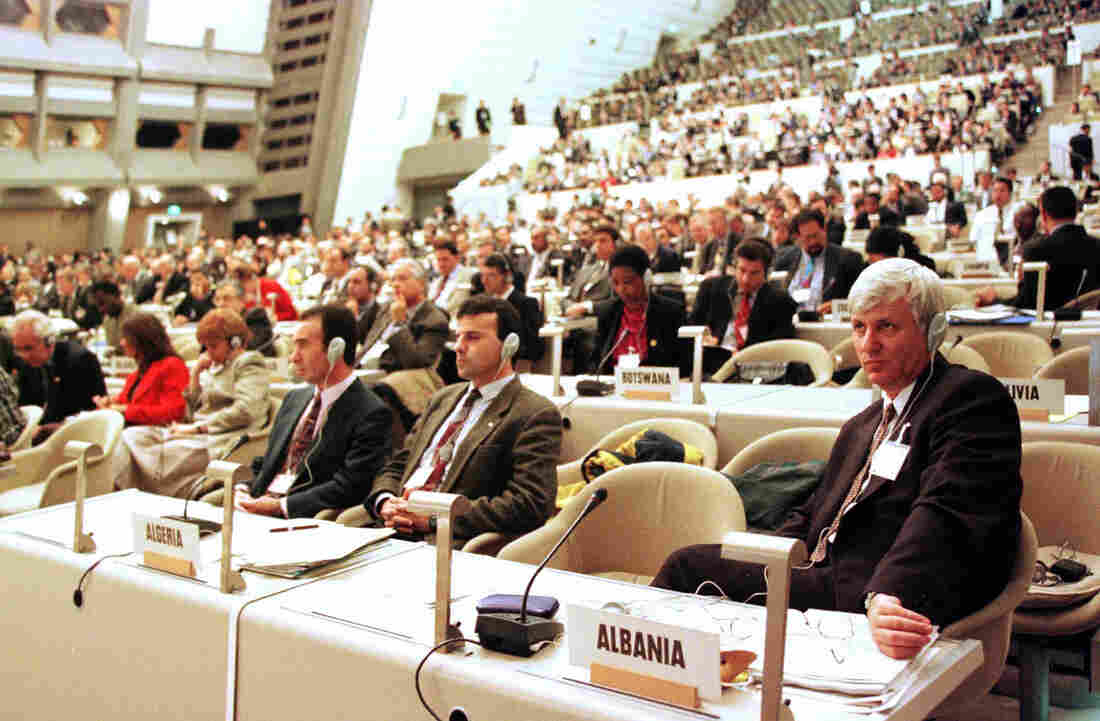 Delegates from about 170 countries gathered in Kyoto in December 1997 during the United Nations Framework Convention on Climate Change. This year in Paris, the stakes are even higher, negotiators say. AFP/Getty Images hide caption 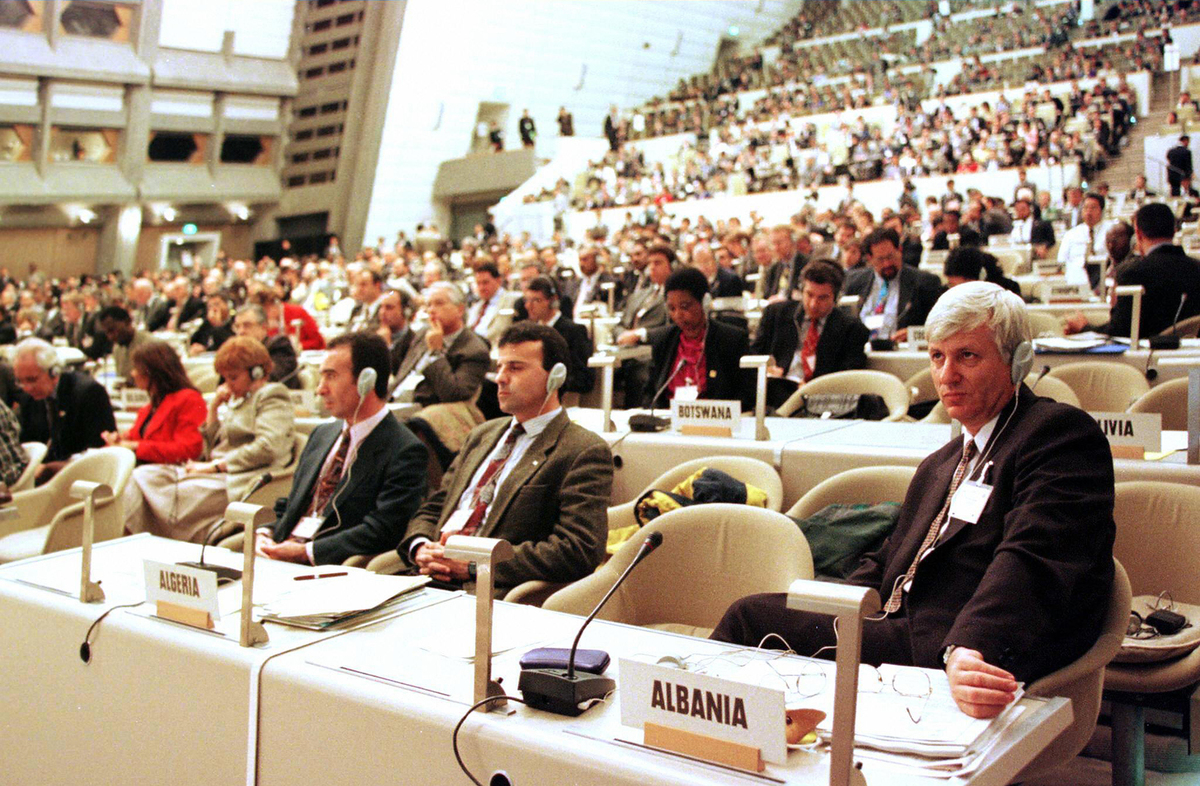 Delegates from about 170 countries gathered in Kyoto in December 1997 during the United Nations Framework Convention on Climate Change. This year in Paris, the stakes are even higher, negotiators say.

Delegates from nearly 200 nations are in Paris to negotiate a new agreement to curb global warming.

The first such meeting took place 18 years ago in Kyoto, Japan — a conference that produced the first international treaty aimed at slowing climate change. That attempt failed.

Scientists say the planet is closer than ever to a climate catastrophe. So this time, the climatocracy has devised a radically new approach, requesting all countries to come up with voluntary limits on greenhouse gasses. The new plan also offers poorer countries cash to help offset their costs.

When governments met in 1997 in Kyoto, Japan, the scientific evidence for a changing climate was still fairly fresh, though even then it was clear that more carbon dioxide was going up into the atmosphere than in previous eras. Scientists thought it likely that burning fossil fuel — coal, oil and natural gas — was the main source.

That brought governments to Kyoto to do something about it. Two weeks into the talks, a consensus looked hopeless. Some leaders feared their economies would tank without energy from fossil fuels. So Al Gore, then the U.S. vice president, flew to Kyoto to reassure everyone that cutting back on CO2 wouldn't break the bank. "The imperative here is to do what we promise," he told the thousands gathered there, "rather than to promise what we cannot do." 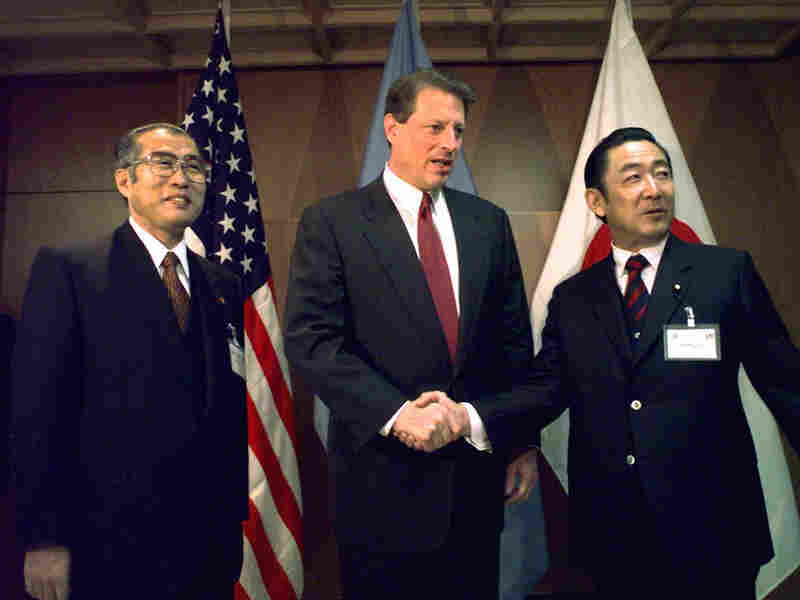 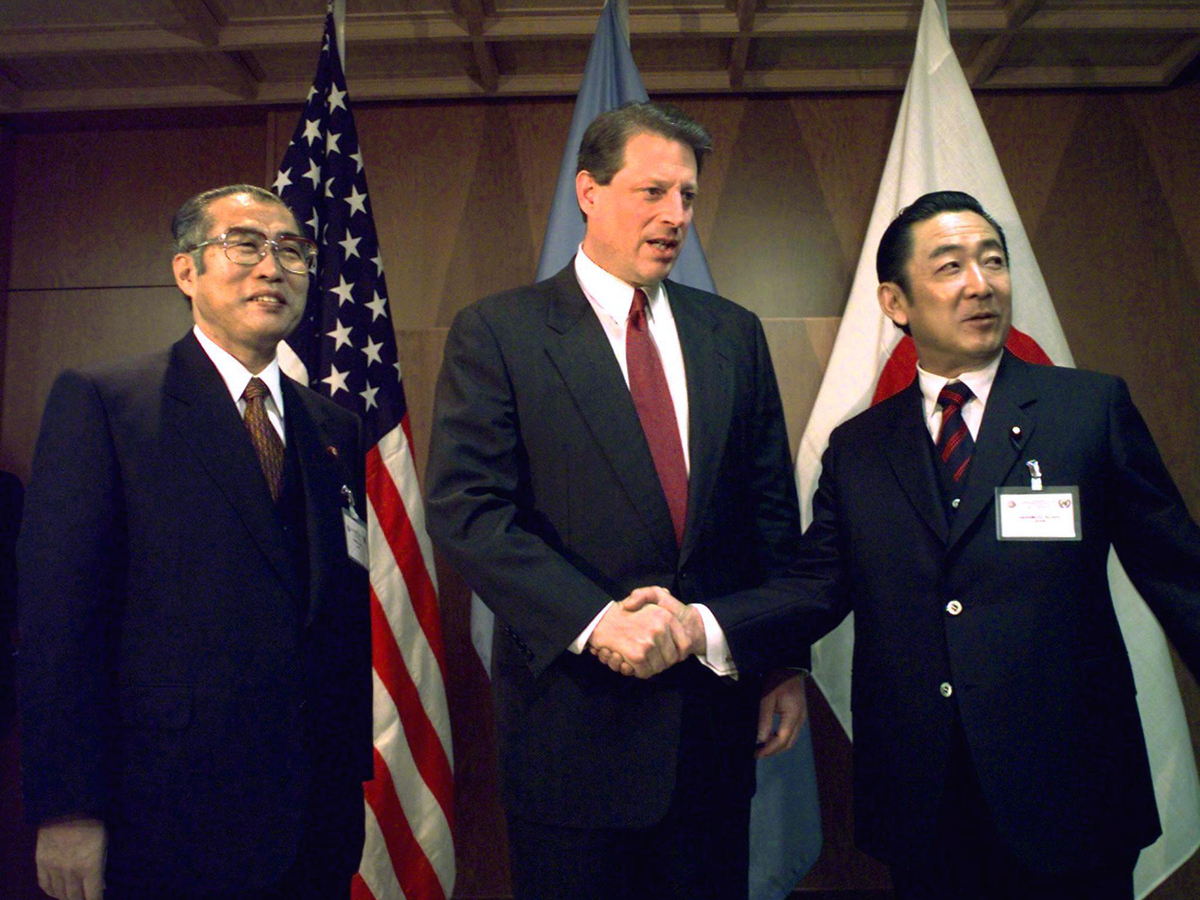 Eventually, a treaty emerged. It set targets for developed countries to reduce the greenhouse gases that cause warming. Gore reassured countries of the developing world, however, that they would be exempt.

"We understand that your first priority is to lift your citizens from the poverty so many of them endure," Gore said," and to build strong economies that will ensure your future. This is your right. It will not be denied."

Harald Dovland, now climate policy director for the consulting firm Carbon Limits, represented the Norwegian government in the Kyoto talks. He said it looked like a real breakthrough.

"We had the first commitments," Dovland remembers. "We had a process on strengthening commitments. [It] didn't work out."

Boom In China's Economy Pumped Up Their Emissions, Too

Why not? Well, these cuts in emissions were set to start 10 years later — in 2007 – so there was plenty of time to prepare to reduce emissions. But the U.S. never even signed on; Congress wouldn't approve the treaty. And during that same 10 years, China's economy took off. Greenhouse gas emissions from China soared, yet, under the terms of the Kyoto treaty, the country's leaders were not obligated to reduce emissions.

Valli Moosa, a South African delegate during the Kyoto sessions, says the treaty was undercut from the start.

"You actually cannot have a meaningful agreement without China and the United States being part of it," Moosa says. And many developed countries either dropped out of the treaty or didn't live up to their promised reductions in emissions.

By 2009, two years after the Kyoto agreement took effect, it was clear that the treaty wasn't going to slow the planet's fever. World governments met in a mood of desperation in Copenhagen to draft a new treaty to replace Kyoto. They, too, failed.

Developing Countries Tell Rich, 'You Broke The Climate, You Fix It'

Rich countries were worried about ruining their economies. And many wanted developing nations to pitch in. That set off a global spat. You made this mess, the developing countries said, and it's like the sign at the gift shop — 'You break it? You pay for it.' And by the way, they told the richer nations, we need a lot of money out here to deal with the mess you've made for us.

President Obama flew to Copenhagen in hopes of breaking up the fight. Afterward, back at the White House, he told a gathering of reporters, "One of the things that I think that is most valuable about sports is that you can play a great game and still not win."

Copenhagen was a devastating defeat for all who hoped to stop the globe's warming. It rattled members of the international climatocracy so much that they radically changed course.

So, for Paris, here's the new thinking: For one thing, says South Africa's Valli Moosa, international bureaucrats can't tell the world's biggest economies what to do.

"I don't believe," Moosa says, "that you're going to be able to make, through this process, a China or United States do something that it doesn't already want to."

So this time governments are volunteering the limits on their emissions. Moreover, all countries — not just the developed world — have to set limits.

And now there's lots of money pledged to help developing countries deal with climate change. There's an international fund that's ultimately to have $100 billion in it. The U.S. has promised $3 billion, China $3.1 billion. Some of that would pay for wind and solar energy, and for other methods of making electricity for countries that don't have enough.

French climate negotiator Laurence Tubiana says the message from Paris will be: You can get rich and still reduce emissions.

"Now, the Chinese, and even the Indians are really coming in," Tubiana says. "It's about a low-carbon economy."

This Paris conference, the climate community wants you to know, will be very different.

Valli Moosa, the former climate negotiator who is now a business man in South Africa, hopes that citizens around the world are still listening.

"You know, the eyes just glaze over," he says. "Even people in the environmental movement actually don't understand the details of the current negotiations," he says. "You just can't keep up your energy to follow all of this stuff for so many years."

But the details matter. Moosa and everyone else in the world of climate policy say this problem — one the entire Earth is facing — is way too big to have a simple solution.