Accessibility links
Facing Rising Waters, A Native Tribe Takes Its Plea To Paris Climate Talks As international leaders convene in Paris to talk about solutions for climate change, one tribe on the Washington coast reluctantly plans its retreat from the encroaching Pacific Ocean. 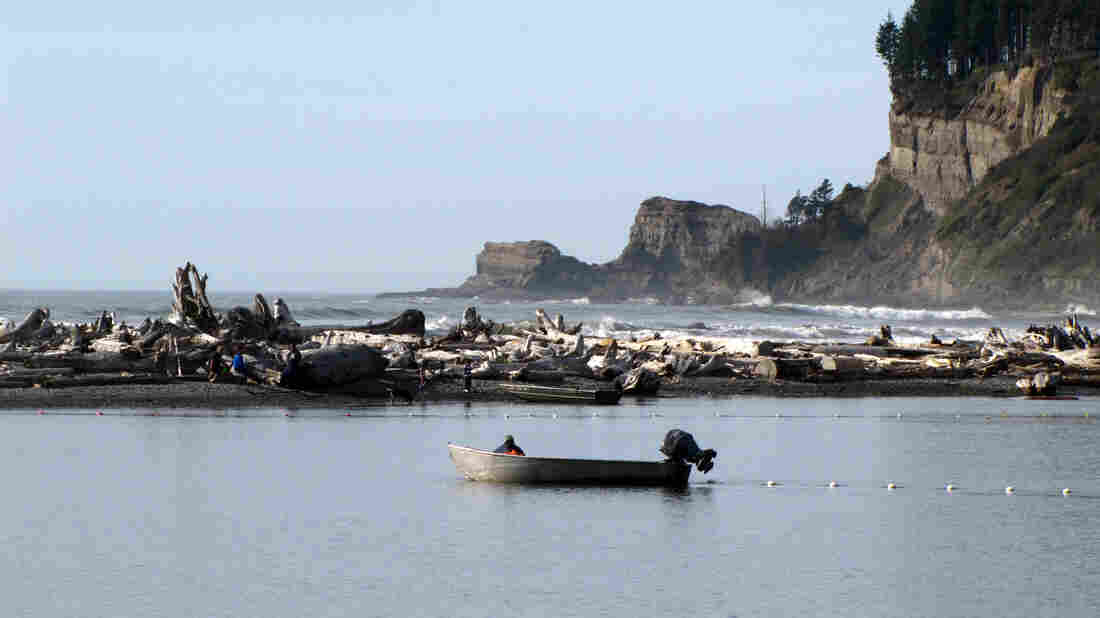 A tribal fisherman brings up his nets near the mouth of the Quinault River on the coast of Washington state. Climate change is threatening tribal families, who have worked the same fishing grounds along this river for generations. Ashley Ahearn/KUOW/EarthFix hide caption 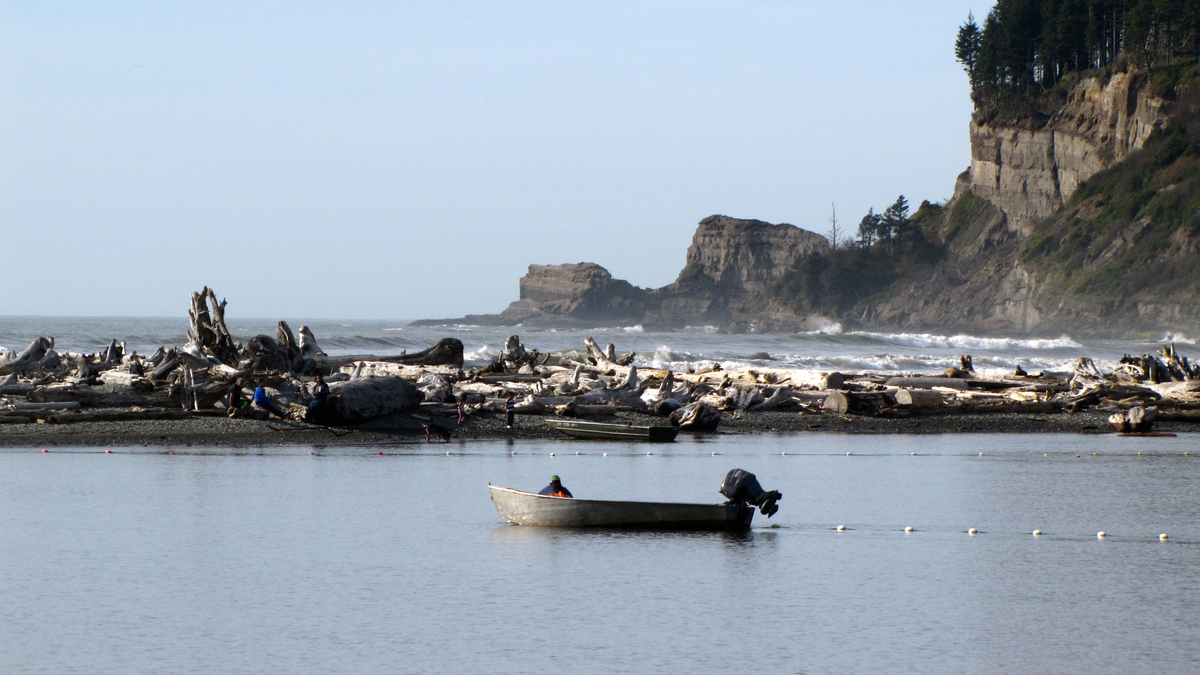 A tribal fisherman brings up his nets near the mouth of the Quinault River on the coast of Washington state. Climate change is threatening tribal families, who have worked the same fishing grounds along this river for generations.

International leaders gathering in Paris to address global warming face increasing pressure to tackle the issue of "climate refugees." Some island nations are already looking to move their people to higher ground, even purchasing land elsewhere in preparation.

In the U.S. Northwest, sea-level rise is forcing a Native American tribe to consider abandoning lands it has inhabited for thousands of years.

The Quinault Indian Nation, whose small village lies at the mouth of the Quinault River on the outer coast of Washington's Olympic Peninsula, now relies on a 2,000-foot-long sea wall to protect it from the encroaching Pacific Ocean.

Small, ramshackle homes back up to the modest wall of rock and gravel. Last March, Quinault Tribal Council President Fawn Sharp got a call in the middle of the night from an elder who lives in one of those homes.

"The ocean breached into his backyard and took out his smokehouse," Sharp says.

The U.S. Army Corps of Engineers repaired the sea wall, but it's a temporary fix. A more permanent solution is on the table — but it won't be cheap or easy.

The Quinault tribe has developed a $60 million plan to move the entire village of Taholah uphill and out of harm's way. That will mean relocating the school, the courthouse, the police station and the homes of 700 tribal members a safer distance from the encroaching Pacific.

This place, right here, where we are, is where my people have lived for thousands of years, and each and every member of this tribe, we're all proud Quinault tribal members, proud Native Americans. I don't ever want to leave this place, but if the ocean keeps rising, we're going to have to.

"It's a heavy price tag," Sharp acknowledged, adding that she and others with the Quinault will be turning to Congress, philanthropists and the tribe's own financial resources to pay for the project.

"When it comes to extreme measures taken to adapt to climate change, it does take an entire collaborative approach among agencies. It can't be done alone," she says.

The threat of climate change for the Quinault doesn't end with sea-level rise. Five years ago, the Anderson Glacier, which contributes cool water to the Quinault River at critical times of year, disappeared for good. It had been receding for as long as locals had been photographing it, but Sharp still remembers the day when she saw that it was completely gone.

"In that moment I could feel my heart sinking, thinking that the glacier that feeds the mighty Quinault River has now disappeared," she says.

The absence of the glacier is already being felt. Very little snow fell on the Olympic Mountains this past winter, leading to minimal snowmelt feeding into the Olympic Peninsula's rivers, including the Quinault. Normally, glacial melt supplements river flows late in the summer and early fall.

But without the glacier, the Quinault River was lower than ever recorded. So low that while walking through a newly exposed stretch of riverbed, one tribal member stubbed his toe on what turned out to be a mastodon jaw that may have been submerged since the last ice age.

For the salmon that migrate home to cool in glacially fed Northwest rivers like the Quinault, things were difficult this year.

Of the 700 people who live in the Quinault village of Taholah, almost half are directly dependent on salmon fishing.

"That fishing ground over there, that ground belongs to my dad," says Shane Underwood, pointing across the water to a man in a small skiff pulling up his net. "My brother fishes that ground, and he has a family of 10 people in his household that he has to support. His sole source of income is fishing."

He's standing at the Quinault fish-processing facility he manages, looking out over the mouth of the river. Lines of gill nets stretch across different spots along the banks, each one representing a tribal family that has been catching returning salmon there for generations.

Big Trouble Looms For California Salmon — And For Fishermen

The warm ocean waters and dry summer have made for a confusing and hostile environment for salmon, which rely on cool river flows to find their way home to spawning grounds above Lake Quinault.

Normally, at this time of year, the Quinault seafood plant processes 70,000 pounds of salmon per day. But Underwood said tribal fishers are catching half of that this season. The tribe has decided to limit fishing days to help more salmon live long enough to spawn.

Shane Underwood's son, David, has been fishing since he was 7. He's now 23.

"It's my favorite thing to do. I want my grandchildren to know what salmon are," he says. "The rivers are a lot warmer now. Climate change could take all our salmon away. Climate change really worries me a lot."

The average American will move 11 times in his or her lifetime, but Native American tribes are place-based. David Underwood says it's hard to explain what relocating would mean for his people.

"We'd pretty much be lost. This place, right here, where we are, is where my people have lived for thousands of years, and each and every member of this tribe, we're all proud Quinault tribal members, proud Native Americans. I don't ever want to leave this place, but if the ocean keeps rising, we're going to have to," he says.

In her role as tribal council president, Sharp has represented her Quinault people at international climate talks before. She traveled to Poznan, Poland, nine years ago for a previous round of climate negotiations.

The Quinault Indian Nation put together a climate adaptation and mitigation strategy at the time. It also had considered signing on to the 1997 Kyoto Protocol, which, as a sovereign nation, it was free to do — despite the fact that the U.S. did not ratify the agreement.

She says she's heartened by the increasing presence of representatives from island nations and other developing countries at the international climate gatherings in recent years. Indigenous peoples around the world are often on the front lines of climate change despite the fact that they contribute the smallest amount of greenhouse gases to the atmosphere.

Sharp says the international community should take note of that disparity. 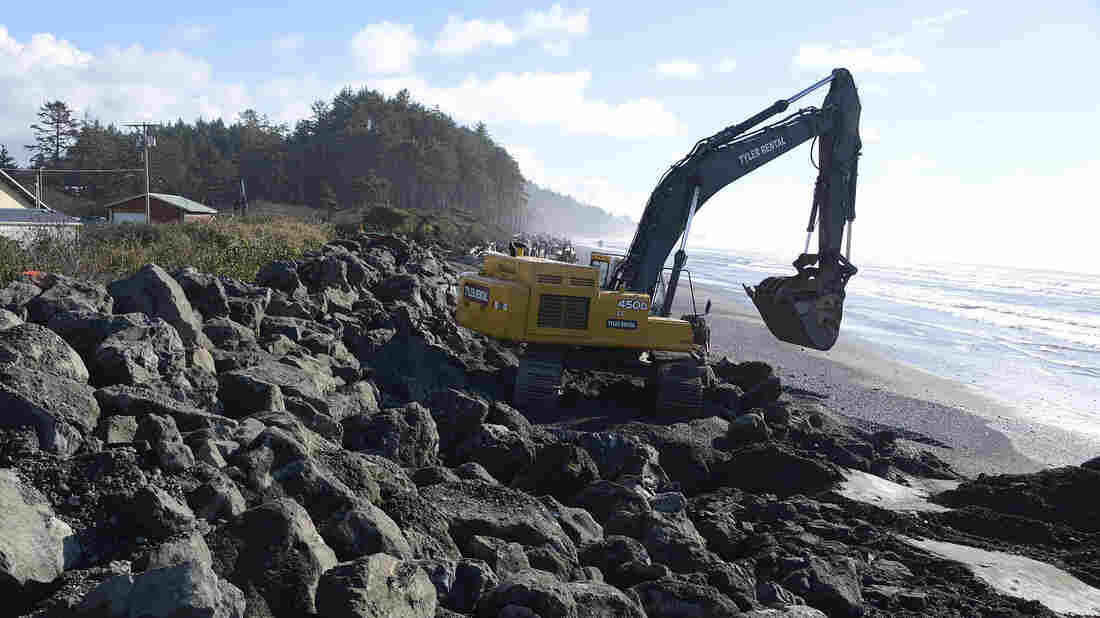 This sea wall protects the Quinault Indian Nation at the mouth of the Quinault River. In March, a state of emergency was declared by the tribe when waves crashed over the wall. Larry Workman/KUOW/EarthFix hide caption 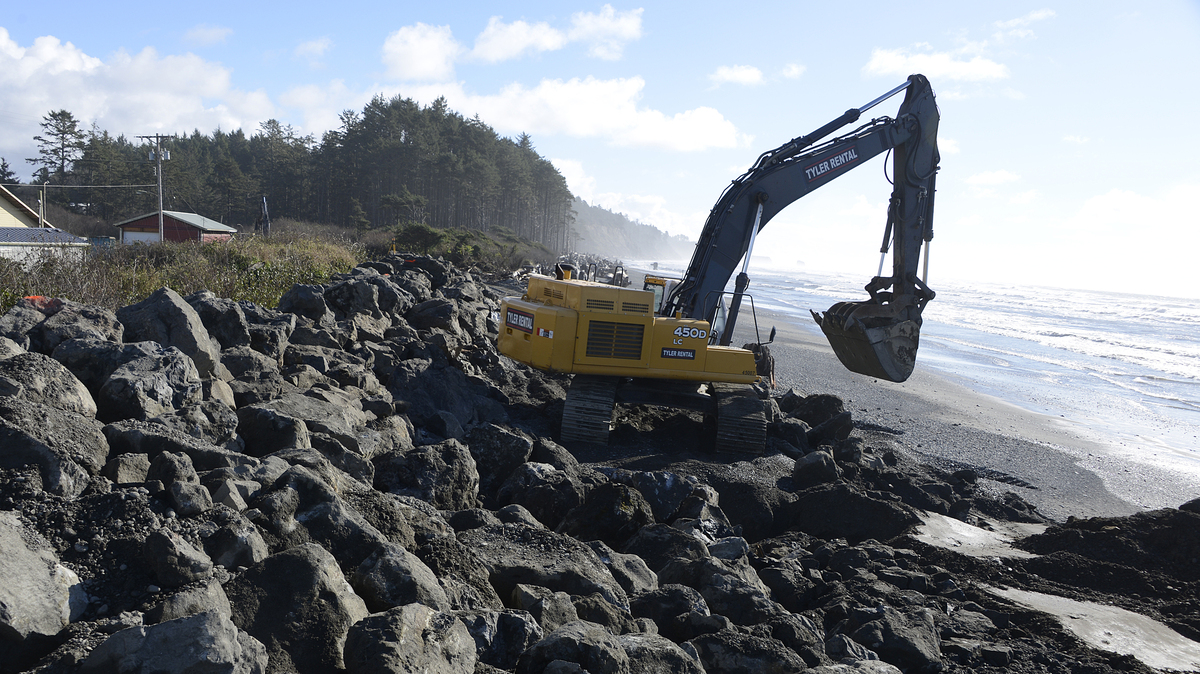 This sea wall protects the Quinault Indian Nation at the mouth of the Quinault River. In March, a state of emergency was declared by the tribe when waves crashed over the wall.

"And if there are areas where a jurisdiction or an entire nation of people don't have the capacity or financial wherewithal to contend with the issue, then there is a responsibility in other parts of the world to provide that aid and assistance," she says.

In the audio of this story, as in a previous Web version, we say that Quinault Tribal Council President Fawn Sharp will be attending the climate talks in Paris. It turns out that Sharp decided not to attend and that representatives from two other tribes in Washington state are going instead.