Accessibility links
From Pocket Lining To Jeans, A Niche Means Survival In LA Fashion The fashion industry in LA has been bleeding jobs for years. One bright spot has been high-end denim. Whereas $30 jeans are often made in China or Mexico, designer jeans are almost always made here. 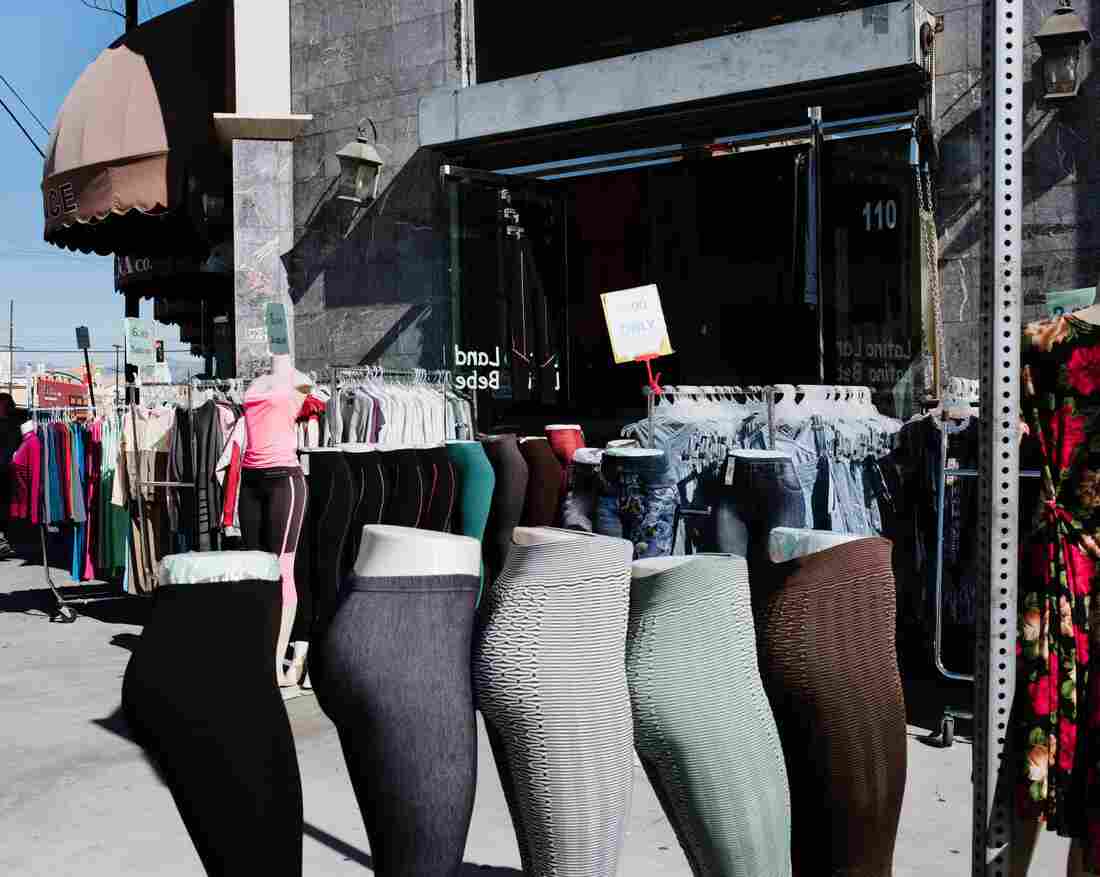 Los Angeles is a region better known for Hollywood, but it actually has more manufacturing jobs than any other metro area in the U.S. Of the more than half-million manufacturing jobs in the region, about 50,000 of them are in the garment industry.

Fashion is a big part of LA's identity, and you feel it in the Fashion District downtown. It has changed a lot since the late 1980s, when plain beige towers called California Mart bustled with all things related to the garment industry.

Brian Weitman grew up around the garment industry and remembers Cal Mart's heyday.

"It was first-generation migrant workers working their butts off all day long on a sewing machine or cutting tables, and these buildings were just humming. And there were racks rolling in and out all day long. These freight elevators, you'd have to wait to just load your garments in them to get them into a truck to get them to ship out to a store," Weitman says. "But everyone wanted to be around here because this was the hub. This was the only showroom center in LA."

He says back then, workers could spend all their time here. "It was amazing energy, and also, inside of this building, you could almost like live in there and never leave except for sleep," he says. "They had a barbershop, dry cleaner, 15 different restaurants you could eat in, a dentist."

Weitman owns a company that makes the things that go on the inside of a garment — waistbands, pocket lining, shirt collar lining, dress linings. When you reach into your jeans for your keys and rub your hand against the lining of the pocket — there's a chance Weitman's company made that material.

But times have changed in the fashion industry here in LA. Weitman, a board member of the California Fashion Association, says the Cal Mart building "is probably at 50 percent occupancy." 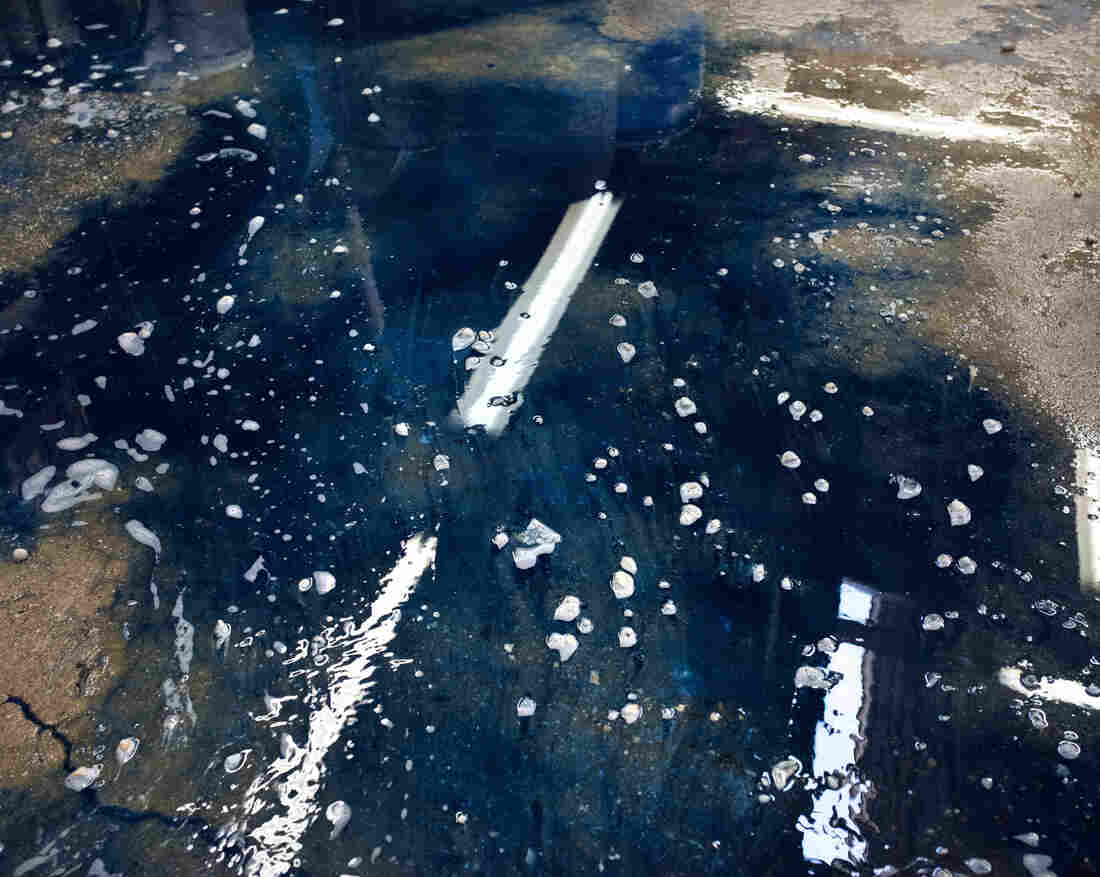 The fashion industry here has been bleeding jobs for years. A lot of low-end work has moved overseas. Decades ago, you could work here and raise a family — getting paid per garment — even though it was difficult work.

Back in the 1980s, when business was booming, Esperanza Monterrosa came to LA from El Salvador. She raised four kids on income she earned sewing pieces at home. She told NPR last year that her manager would drop off the material to sew along with diapers for her kids so that she wouldn't have to leave the house. 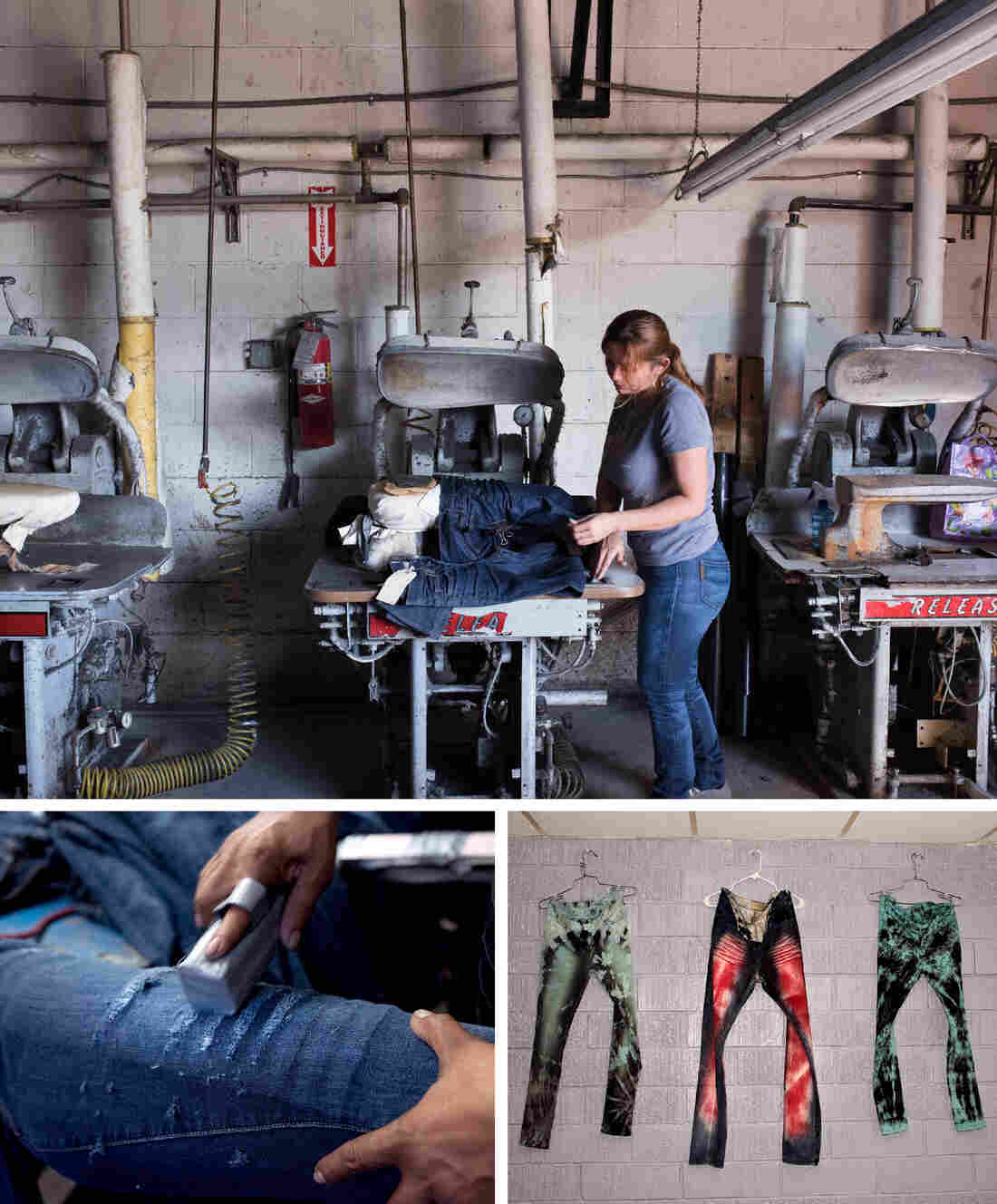 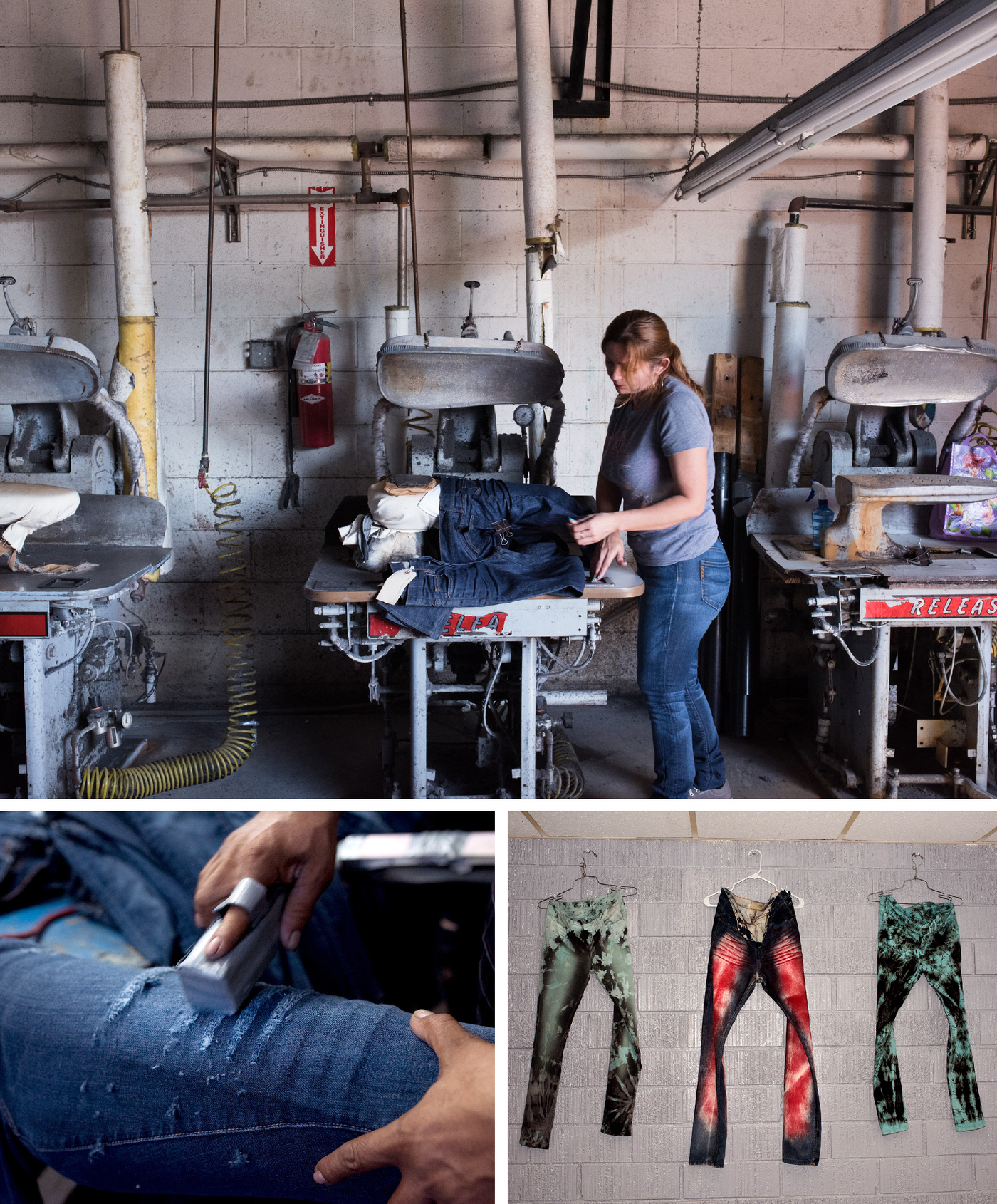 (Top) A worker at Blue Creations prepares a pair of blue jeans for a crinkle effect known as "3-D whiskers." (Bottom) Employees at Blue Creations apply the destruction/distressing process to jeans by sanding, ripping and tearing them on molds.

By the mid-'90s, the garment industry was changing, and some big factories closed and sent work overseas. Economists say that when factories go overseas, it forces wages for unskilled work down. While the garment industry has helped keep LA as a manufacturing city for longer than other American cities, economists agree this industry is not the way of the future.

One bright spot here has been high-end denim. A lot of $30 jeans are made in Mexico or China, but designer jeans almost always come from LA. That's because hot trends come and go — and designers can't really send stuff abroad and wait for it to come back. They're still using the talent and expertise here in LA.

They're doing it at places like Blue Creations, a wash house that puts finishing touches on designer jeans.

These are serious finishing touches. Designers send their instructions, and employees here cut those perfect designer rips, and they iron and sand. They load jeans into ozone machines to distress them, or they stuff them into massive dryers with a bunch of golf balls.

"Throw the golf balls in with the jeans, and it tumbles. It softens it up," says Oscar Quintero, whose family runs the wash house. With all those cheaper jeans being made overseas, Quintero deals with some fancy designer stuff. Jeans that cost $200 or $300 come through a wash house with really humble roots. 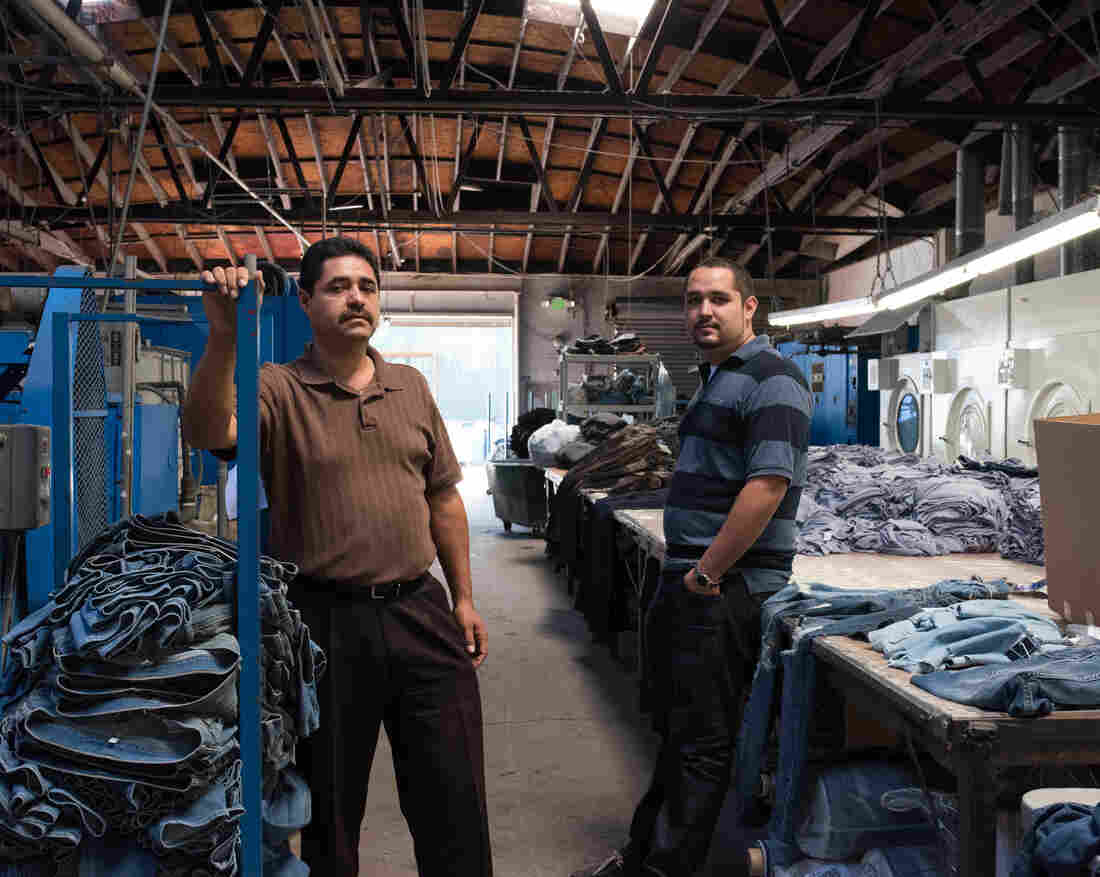 Raul Quintero and his son Oscar, owners of Blue Creations, at their factory. John Francis Peters for NPR hide caption

Quintero's dad, Raul, brought the family to the U.S. from Mexico in the '80s. He worked in this wash house and then bought it in 2004.

"In the beginning, when I take over the company, I [was] doing everything — sales, driving, answer the phone, everything," he says. "I [didn't] have money to bring somebody to help me."

Raul Quintero mortgaged the house to buy the company. The previous owners were selling, he says, because clients wanted to move production to China.

But he took a risk and is still in the game today.