Accessibility links
In Havana, Dance Rhythms Rule After a trip to Havana this month, our global music specialist has her ears full of Cuban sounds — classical and jazz, electronic and folkloric. Hear the wave that new relations will release. 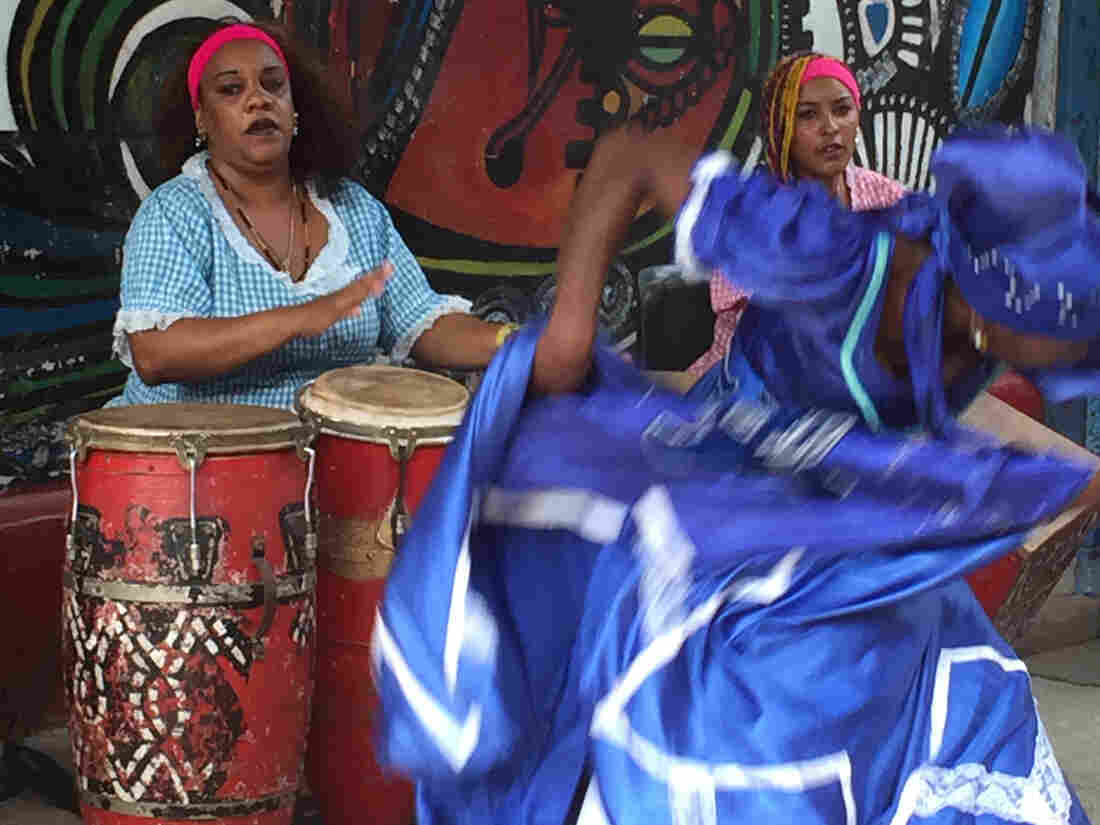 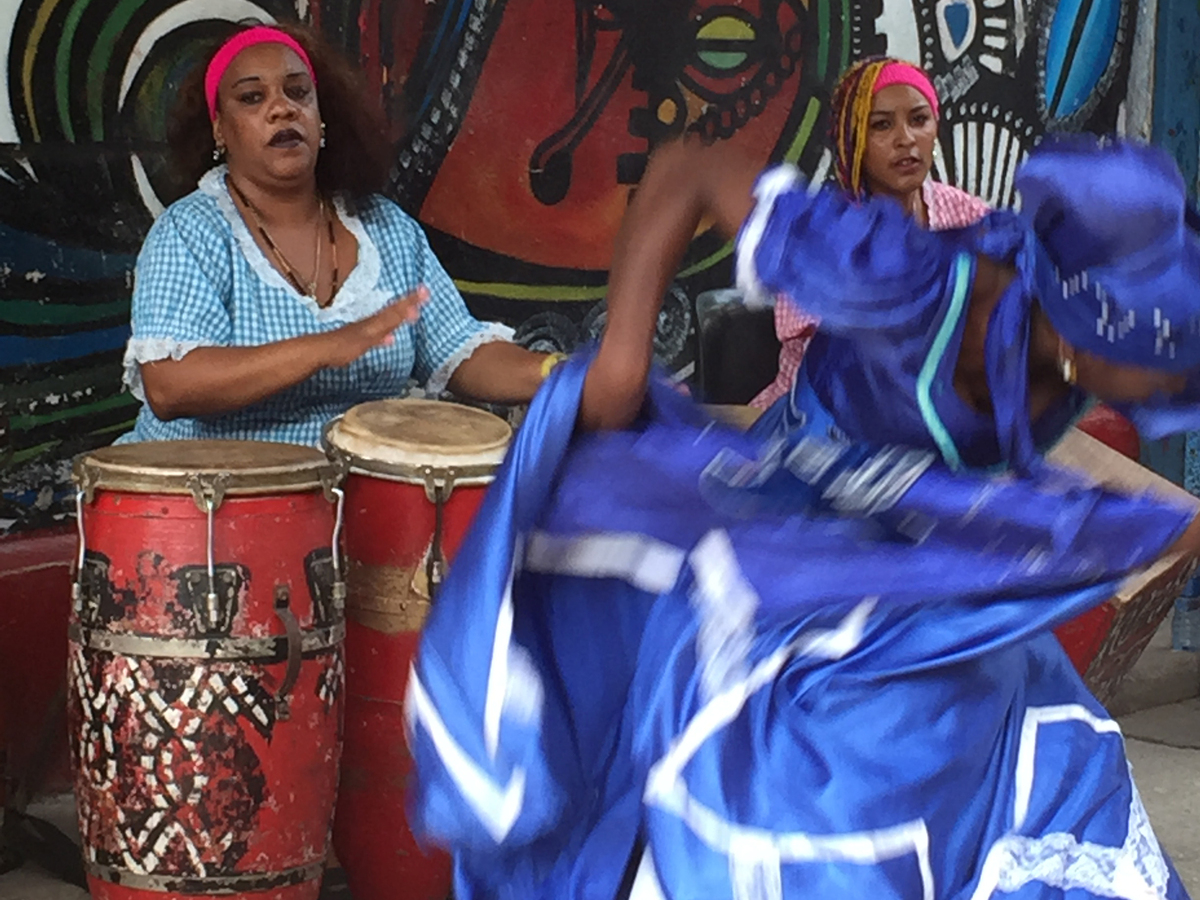 Members of the group Rumba Morena perform in Havana in November.

In mid-November, I was lucky enough to accompany a group of American composers and performers traveling to Cuba for the Havana Contemporary Music Festival.

Going to Cuba was a longtime dream for me, especially as it has been an incubator for incredible music and dance that draw upon its history as a crossroads — and crucible — for indigenous, West African, Spanish and other imported traditions. As Fernando Sáez Carvajal, the director of an independent contemporary dance company, Malpaso, pointed out to me, Cuba is not just an island. It is also a collection of ports, and historically, port cities are incredibly fertile grounds for creativity and innovation because different peoples come together.

In the weeks ahead, I'll have much more reporting and conversations from this trip, but Cuba is such sacred ground that I couldn't help but dedicate this month's edition of Latitudes entirely to its music.

The Havana Contemporary Music Festival is led by composer and conductor Guido López-Gavilán, who was a very enthusiastic and warm host to the 10 U.S.-based composers selected for this experience. I've now heard a few different versions of one of his works, the lively and polyrhythmic Camerata en Guaguancó.

The guaguancó is a kind of Cuban rumba. Though this piece now exists in several forms, I like the warmth and intimacy of this arrangement for string quartet and friends, featuring the Dalí Quartet. López-Gavilán's music is also a good example of how vitally important dance rhythms and traditional sonorities remain in Cuban contemporary classical music.

One night, I headed with a few American composer friends over to the basement bar of the Teatro Bertolt Brecht to hear a 12:30 a.m. weeknight set by the funky Havana musical collective Interactivo. We'd heard that this venue was the place to be — and, true to promise, the room was jammed full of young, music-loving Cubans who sang and danced along to every song the band pulled out.

Artistically, Interactivo is something of a moveable feast. The band's lineup, and musical priorities, shift with the comings and goings of its musicians, helmed by the pianist and musical director Robert Carcassés. On the night we heard them, the musicians drew heavily on timba, funk and 1970s-shaded jazz fusion.

Speaking of fusions: Several of my new Cuban friends asked me if I'd heard the Cuban-French duo Ibeyi yet — they're twins ("ibeji" in the Yoruba language) and daughters of renowned Cuban percussionist Miguel "Anga" Diaz. I've been a big fan of the luminous Ibeyi for a while now, but after visiting Cuba even briefly, I have an additional appreciation of how they intertwine electronic music and soul with the Yoruban chant and spirituality they've inherited. Their song "Oya" references the female warrior orisha spirit of the winds and storms, Oyá.

While in Havana, I spent a magical afternoon at the storied studios of EGREM, Cuba's national recording label. Tourists have gotten to know it as the place where the Buena Vista Social Club's happenstance recordings became a global phenomenon nearly 20 years ago. But EGREM is also the recording home to decades of the island's legends: Bebo Valdés. Orquesta Aragón. Irakere. Gonzalo Rubalcaba. Every great Cuban musician from the 1960s onwards, it seems, has stepped behind EGREM's microphones.

Despite an agreement inked this fall for Sony Music Entertainment to license tens of thousands of EGREM catalog tracks, the studio's facilities and equipment still have a huge amount of wear and tear, from a nonfunctioning mixing console in its main recording space to a floor so creaky that musicians must be directed exactly where to stand, lest arrhythmic squeaks invade their recordings. Even so, Cuban artists still flock to EGREM; just a few weeks before my visit, the great conguero Pedrito Martinez, who is now based in New York, was there to work on a new project.

The dialogue between the U.S. and Cuba — artistic, cultural, political and economic — is ever evolving. Not long before I left for Havana, my colleagues over at Jazz Night in America released a wonderful concert documentary of Cuban-American pianist-composer Arturo O'Farrill's incredibly timely cross-cultural project "Cuba: The Conversation Continues." It features a fantastic array of musicians, from the sparkling Cuban tres player Cotó to a gifted young Cuban trumpeter named Kalí Peña-Rodriguez to an old friend of mine, the blazing American saxophonist Rudresh Mahanthappa.