Accessibility links
Black Pastor Calls Trump Meeting A 'Get-Played Moment' Trump had said he'd be endorsed by 100 black religious leaders at a Monday press conference. Instead, there was a 2 1/2-hour meeting, with requests for apologies — and Trump gave none. 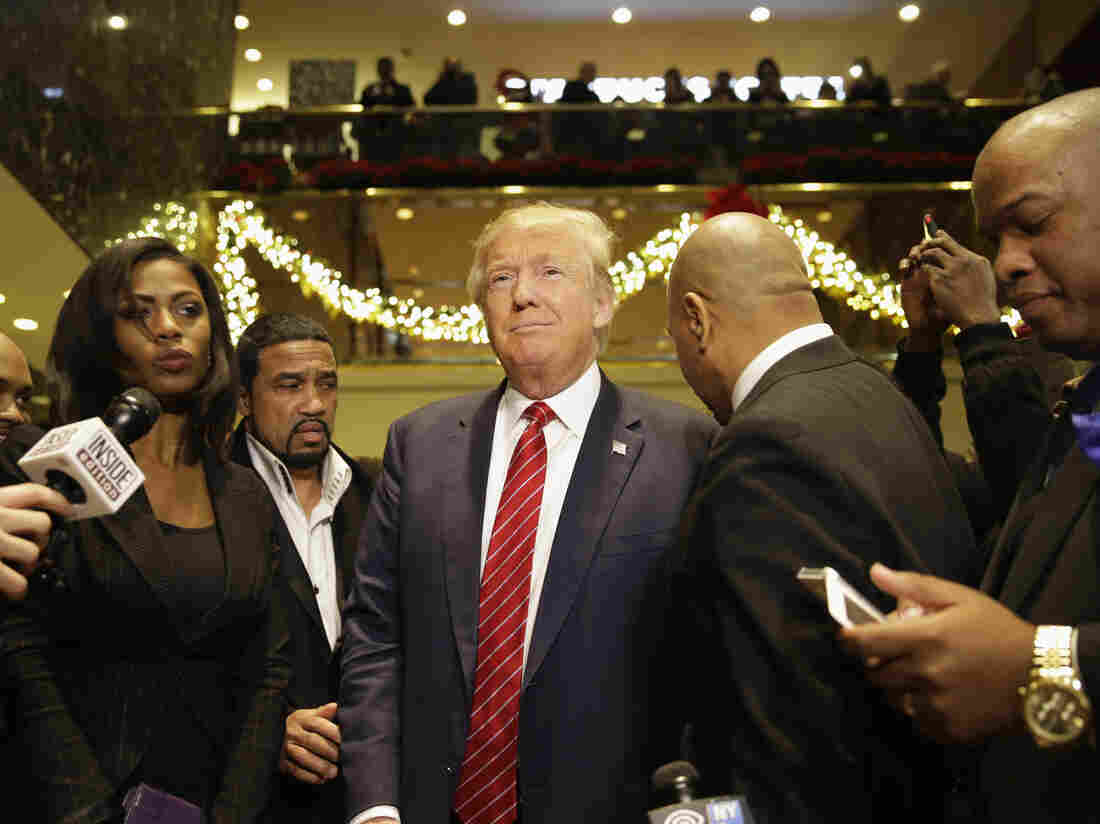 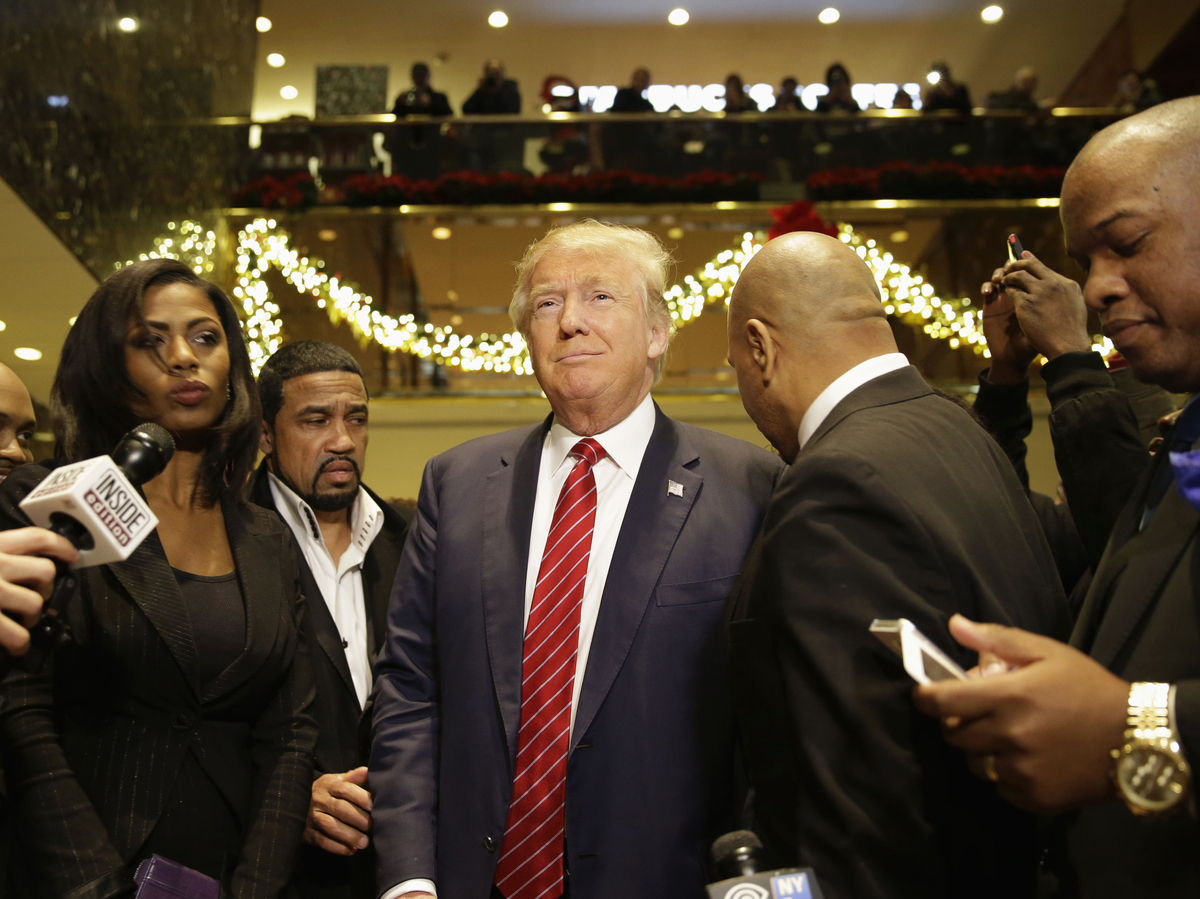 As soon as Donald Trump announced that he'd gained the endorsement of 100 black ministers from across the country on Monday, there were skeptics.

The claim came just days after the presidential candidate said of an African-American Black Lives Matter protester who was beaten up at a Trump event, "Maybe he deserved to be roughed up."

Once the list of the black ministers who were allegedly endorsing Trump was made public, there was even more skepticism — some from the ministers themselves.

Corletta Vaughn had declined an invitation earlier this month to attend a meeting in Manhattan and a press conference afterward. She said she was invited over multiple phone calls with Darrell Scott, a black minister from Ohio who previously endorsed Trump.

"I'm very uncomfortable [with the press conference]," Vaughn said she told Scott. "I'm already uncomfortable about coming to the meeting, and I don't think this is a spot that I need to be in."

Vaughn said she thought that was the end of it, but it wasn't. "I posted something on my Facebook page [last week] about Mr. Trump and my disdain for his campaign," she told NPR. "And I got a post in response that said, 'This is odd ... because I just saw your name on a flier going to the Trump Towers on Monday to endorse him.' "

"I've never seen a flier, I don't know anything about the flier," Vaughn said.

She was not alone. In the days after that flier was released, several ministers named in it have said they weren't endorsing Trump, and that if they met with him at all, it would be to air grievances with his campaign and his rhetoric.

At the meeting itself, Trump so badly wanted commitments that "endorsement cards" were passed around, according to Victor Couzens, a minister from Ohio who did attend.

"There were several persons that signed the endorsement cards," Couzens said. But, he continued, "I would be very hesitant to give a number."

Vaughn felt the event was, in a way, a setup. "This was a get-played moment," Vaughn said. "Just play the preachers. Put them in the same room, take pictures, and then you can put anything you want, in terms of content, with a picture."

In the lead-up to the event, several black ministers took to cable TV and black talk radio to denounce Trump, the event and many of his remarks on race. The event even led to some dust-ups on Twitter between ministers. Jamal Bryant, a Baltimore minister who was invited to the meeting with Trump but declined, had harsh words for those who did plan to attend:

It prompted a response from Scott, who was one of the event's key organizers.

If Trump called Black Preachers "Prostitutes on a Pole", the entire nation would be in an uproar! #BlackPreachersMatter

For respectable Preachers to be called "Prostitutes on a pole" is very insulting, demeaning, and mysogynistic, to say the least.

Couzens said he felt he had a responsibility to attend, even though he disagrees with Trump on a number of issues.

When the actual meeting began Monday, there were fewer people to confront than expected. Couzens says about 50 black ministers showed up to Trump Tower, not the 100 that had been promised — or touted afterward. But in spite of the lower numbers, Couzens said the event went well.

"[Trump] seemed to be in a good mood," Couzens said. "The mood in the room overall was very positive. No one was angry or upset or anything of that nature."

Couzens said the meeting lasted more than 2 1/2 hours and began with a Trump staffer sharing parts of Trump's life story, playing up his Presbyterian faith. Couzens said serious issues were discussed, including black unemployment, racial unrest in places like Baltimore and Ferguson, Mo., and demands from protesters in the Black Lives Matter movement.

And Couzens said he asked Trump, specifically, to apologize for some comments he had made about that Black Lives Matter protester who was roughed up at a Trump event.

"He says he was speaking and the person was heckling him and basically trying to overpower his voice in the arena," Couzens said. "He said that when he made his comments about the person needing to be roughed up, he was not aware at the time that it was an African-American that he was referring to."

Couzens also asked Trump to apologize for a Tweet that stated incorrectly that blacks commit most of the homicides with white victims. Couzens said Trump apologized for nothing.

"He did not offer an apology in our presence," Couzens said, "so I don't know if he plans to apologize in the future, if he will or if he will not. He did say at the conclusion of the meeting that he heard everything that we said."

In an impromptu news conference after the meeting, Trump was again unapologetic.

"The tone [of my campaign] has taken me to first position in every single poll, including state and including national polls," Trump said. "The beautiful thing about the meeting is that they really didn't ask me to change the tone."

Scott appeared with him, as did Omarosa Manigault, a former contestant on Trump's reality show The Apprentice.

A press release from Trump's campaign after the day's events read, "The meeting was considered a great success by all those in attendance and many of the attendees were impressed by Mr. Trump's honesty, leadership and vision."

But Vaughn, who skipped the meeting, said she'd only attend a future meeting with Trump under a few conditions.

"I would sit down with Trump on my terms," she said. "Probably not in his domain, [but] in a more neutral community — maybe possibly in a black church, maybe my church, where we can see how comfortable he is in our space, and whether or not he can relate to some of the concerns we raise."