Accessibility links
Businesses Awaken To The Opportunities Of Action On Climate Change Companies, once seen as an obstacle to or even an enemy of curbing emissions, now realize that tackling climate change can be good for their bottom line.

Listen · 4:34 4:34
Businesses Awaken To The Opportunities Of Action On Climate Change 4:34 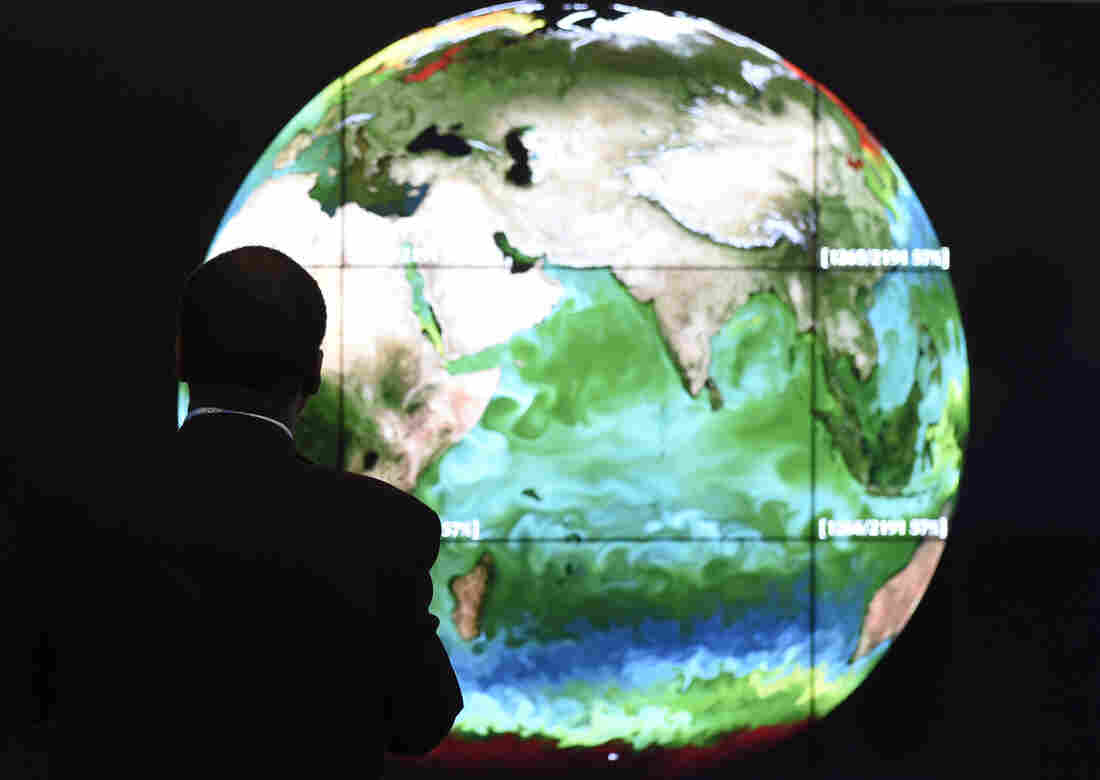 A conference attendee looks at a projection of the Earth on Monday, the opening day of the COP 21 United Nations conference on climate change, in Le Bourget, on the outskirts of Paris. Alain Jocard/AFP/Getty Images hide caption 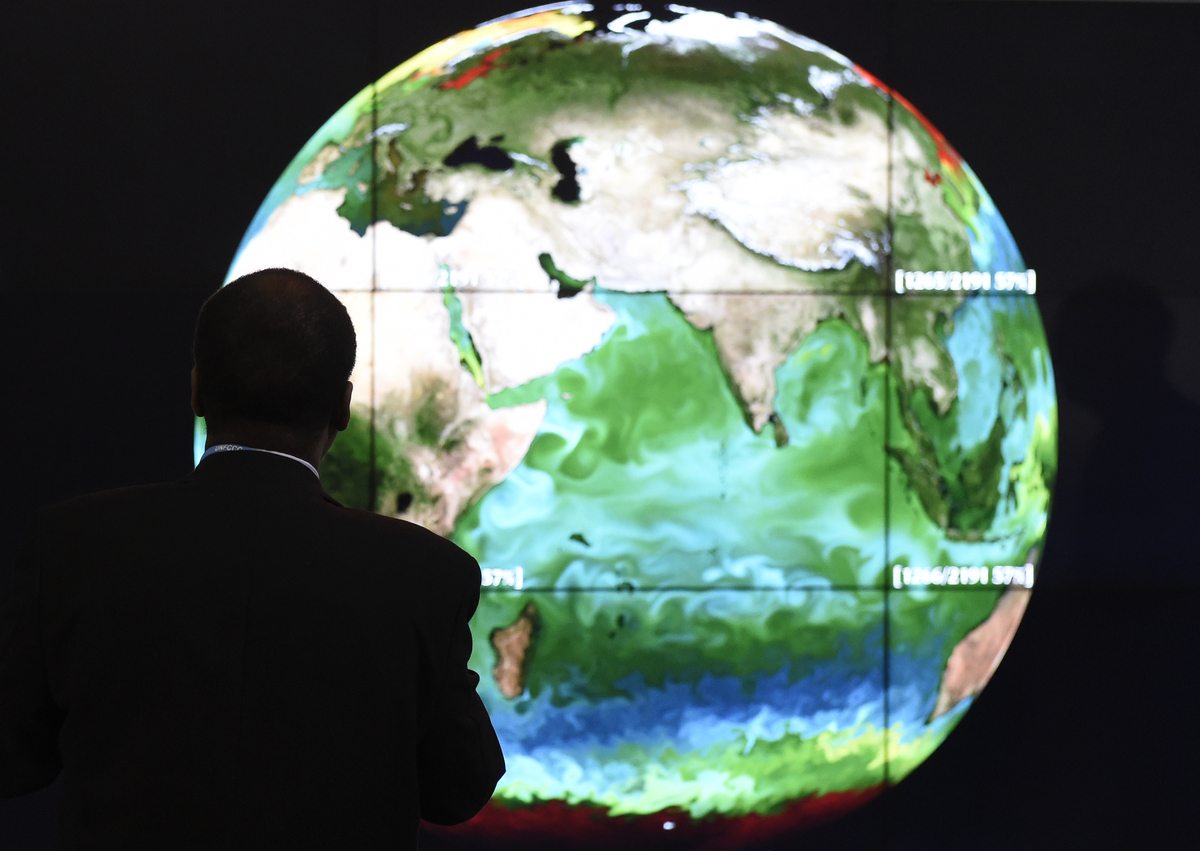 A conference attendee looks at a projection of the Earth on Monday, the opening day of the COP 21 United Nations conference on climate change, in Le Bourget, on the outskirts of Paris.

The business community is well-represented at the United Nations climate summit underway in Paris — and it will be much more engaged in finding positive solutions than ever before.

It's a far cry from the first large-scale U.N. conference to address climate change, which took place in Rio de Janeiro in 1992.

In the past, in fact, business often was an obstacle to action on climate change and seen more as an enemy than a partner.

That was clear in 1992, says Peter Bakker, president of the World Business Council for Sustainable Development.

Out of the some 5,500 delegates at the summit in Rio, Bakker says, "only a handful — to be precise, 13 people — were representing the business sector in that first meeting, and most other delegates thought that business was the cause of all evil."

Fast-forward to now: More than 1,000 business representatives will be in Paris and most will be supportive of climate action, says Edward Cameron, who represents We Mean Business, a nonprofit coalition that is working with companies on climate change.

"There are always going to be pockets of agreement and pockets of disagreement," Cameron says. "But what I think we see going into Paris is a far greater level of support from the business community writ large and far more willingness to speak out publicly about this."

One gauge of business support for curbing carbon emissions is that more than 150 large U.S. companies have signed a White House pledge to reduce their carbon footprint. The list includes firms like General Motors, General Electric and Wal-Mart.

10 Things To Know About The U.N. Climate Talks In Paris

What's changed, Bakker says, is that businesses now see that the cost of inaction is greater than the cost of acting to curb climate change. That's the case at General Mills, the big food company whose products include Cheerios, Lucky Charms and Yoplait yogurt.

"For us it's not theoretical," says Ken Powell, the company's CEO. "We depend on natural systems. And we depend on healthy environment for the crops and the ingredients that we use."

For that reason, businesses in the agriculture and food sector are among those most interested in curbing carbon emissions. General Mills started by reducing energy use in its facilities.

"We've eliminated about $250 million of energy cost over the last 10 years," Powell says. "So for people who worry that companies are misspending resources to address this issue, our experience has not been that; it's been very positive from a business standpoint."

That will be a big theme at the Paris conference: the idea that addressing climate change is good for business.

It's an idea that has gotten Wall Street's attention, too. Big banks and investment firms are beginning to change their approach to investing. They're looking out over the horizon and seeing a low carbon future.

That means limiting investments in carbon intensive businesses and putting more money into companies and sectors that will thrive in a low carbon environment.

Val Smith, director of sustainability at Citigroup, says while her bank wants to be seen as a good global citizen, this is really about good business.

"It is very much about looking at the business opportunity and profits that can be made in the environmental-finance and climate-finance space," Smith says.

Microsoft co-founder Bill Gates echoed that thought Monday in Paris. He was there unveiling the Breakthrough Energy Coalition, a group of nearly 30 wealthy investors, including Virgin's Richard Branson and Facebook's Mark Zuckerberg. They'll act as a vanguard of venture capitalists, moving new clean energy technologies from government research labs to the market.

Of course, there are major business sectors that are lagging. Oil and gas companies must come to terms with potentially leaving billions of dollars' worth of their assets in the ground. Auto companies, whose businesses are built around the internal combustion engine, remain conflicted — witness Volkswagen's emissions cheating scandal. And, if the price of oil remains low for a long period, investments in renewables will look less attractive.

But Cameron of the We Mean Business coalition is cautiously optimistic.

"Business and government need to work as partners in this process. Previously, they haven't. I think they now are, and I think that's one of the reasons why we're likely to see greater success coming out of Paris," he says.

Cameron says what businesses want governments to deliver in Paris are clear goals for curbing carbon emissions, and a price on carbon, in the form of taxes or other measures, that reflects its threat to the planet.