Accessibility links
Classic Sci-Fi Comic 'Eternaut' Fights The Power What should science fiction look like? That's a question that absorbed the creators of The Eternaut, an iconic comic about an alien invasion, first serialized in a Buenos Aires newspaper in the 1950s. 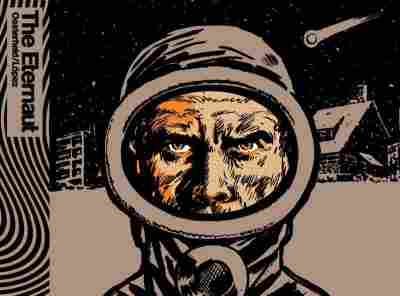 What's science fiction supposed to look like? It's a question that absorbed Argentine writer Héctor Germán Oesterheld, author of the epic comic strip The Eternaut. In the late 1950s, when The Eternaut was serialized in a Buenos Aires newspaper, science fiction was dominated by images of spaceships and faraway planets — and by authors living thousands of miles away. Oesterheld challenged all that. "My stories ... try to express something ... in a way that is ours, that is Argentine," he wrote at one point. "Neither that of [Ray] Bradbury, nor of Arthur C. Clarke, nor of Italo Calvino, nor of any of the other great sci-fi masters. Just that: Ours."

And so Oesterheld crafted an alien-invasion story that's set not in a superpower's capital, but in Buenos Aires. The heroes of The Eternaut wear spacesuits, but it's to protect themselves from harmless-looking but poisonous snow that sifts down onto their homely neighborhood streets. And those spacesuits are hardly high-tech: The characters craft them from leftover bits of hardware.

Most unusual of all is how the characters spend their time. The Eternaut is an alien invasion story, no question; the heroes do battle against death rays, terrifying hallucinations and giant monsters. Often, though, they're busy with prosaic matters such as constructing suits, securing buildings and rounding up — or, sometimes, defending themselves from — fellow survivors of the aliens' first attack.

As such, Oesterheld's tale is an obvious allegory for resistance struggles of all kinds. His characters benefit from having a full pantry and a lot of miscellaneous supplies — including guns. Technical know-how and ingenuity are key. Favalli, the portly physics professor, proves his value again and again, while Mosca, the self-declared historian, is a walking joke. The Eternaut himself, narrator Juan Salvo, represents the average man who relies on bravery, comradeship and a hefty dose of luck.

The characters are granted rich life by artist Francisco Solano López. Their faces are deeply lined and wracked by their feelings. When they're in motion, they're nimble. When they're still, their physicality is heavy and palpable. It's an unusually earthy effect for a '50s science-fiction tale. When depicting alien soldiers that possess bizarre appendages, López exceeds himself with extravagant detail. (The artist, whose prolific international career included the European political drama Ana and the British adventure series Kelly's Eye, died in 2011 at age 82.)

Gradually the characters figure out how to conduct urban guerilla warfare. The quest for information is crucial and constant. It's here that Oesterheld's allegory becomes most intriguing — and aggravating — for although the heroes find aliens to fight, the creatures they encounter aren't in charge of the invasion. They're prisoner-soldiers who refer to their overlords only as "Them." The worst weapon "They" wield is a device that turns the humans against themselves. It "transform[s] your minds," one prisoner-soldier explains, "to change your brain structure [and] make you think exactly like us."

That, Juan realizes, is the worst possible fate. "The hope I'd had a moment ago was shattered," he says. "We were going to be ... traitors, Judases to our species."

Oesterheld's conception of this horror anticipates 1959's The Manchurian Candidate. Such ingenuity helped make The Eternaut an iconic work in Argentina and around the world. It's been published in Mexico, Spain, Croatia, France, Greece and Italy, and Oesterheld and López collaborated on a sequel in the 1970s. But Oesterheld's fate was grim. In 1977 he was arrested and apparently killed by the military dictatorship that ruled Argentina from 1976-1983.

With this volume, translated by Erica Mena-Landry, his masterwork may attract the attention it deserves in North America. Fantagraphics has gone all-out with a multilayered, gleaming binding that emphasizes this book's significance and strangeness. It's hard to say whether The Eternaut is uniquely Argentine, as Oesterheld wanted, but it's definitely unique unto itself.