Accessibility links
Trump To Jewish Republicans: 'I'm A Negotiator Like You Folks' At the Republican Jewish Coalition's candidate forum Thursday, Trump spoke about his Jewish daughter as well as the threat of terrorism and U.S. policy in Israel.

Trump To Jewish Republicans: 'I'm A Negotiator Like You Folks'

Trump To Jewish Republicans: 'I'm A Negotiator Like You Folks' 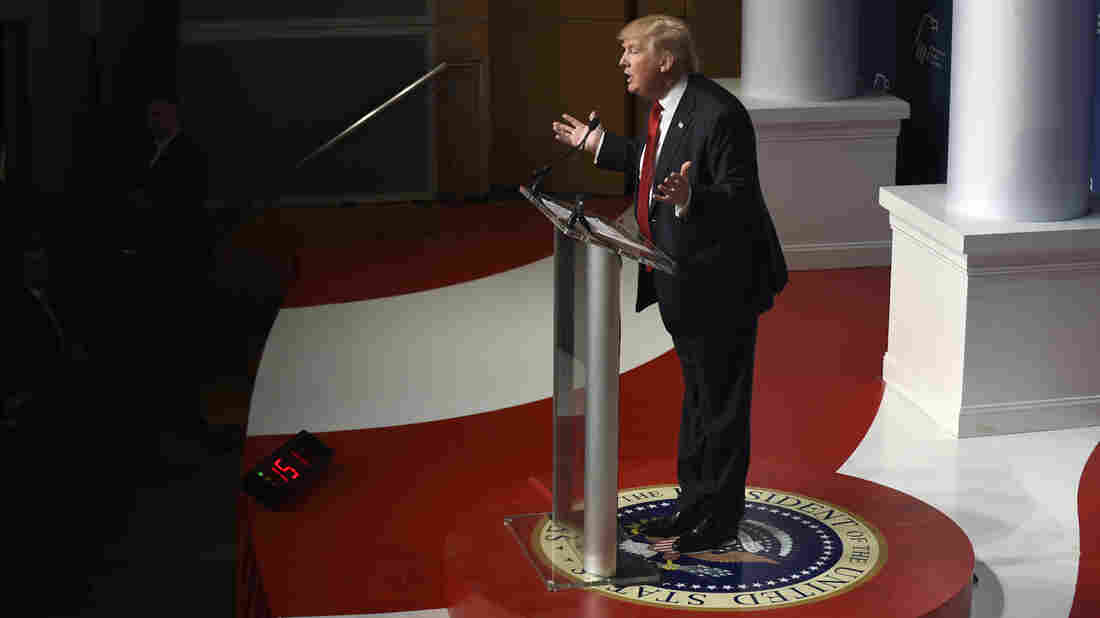 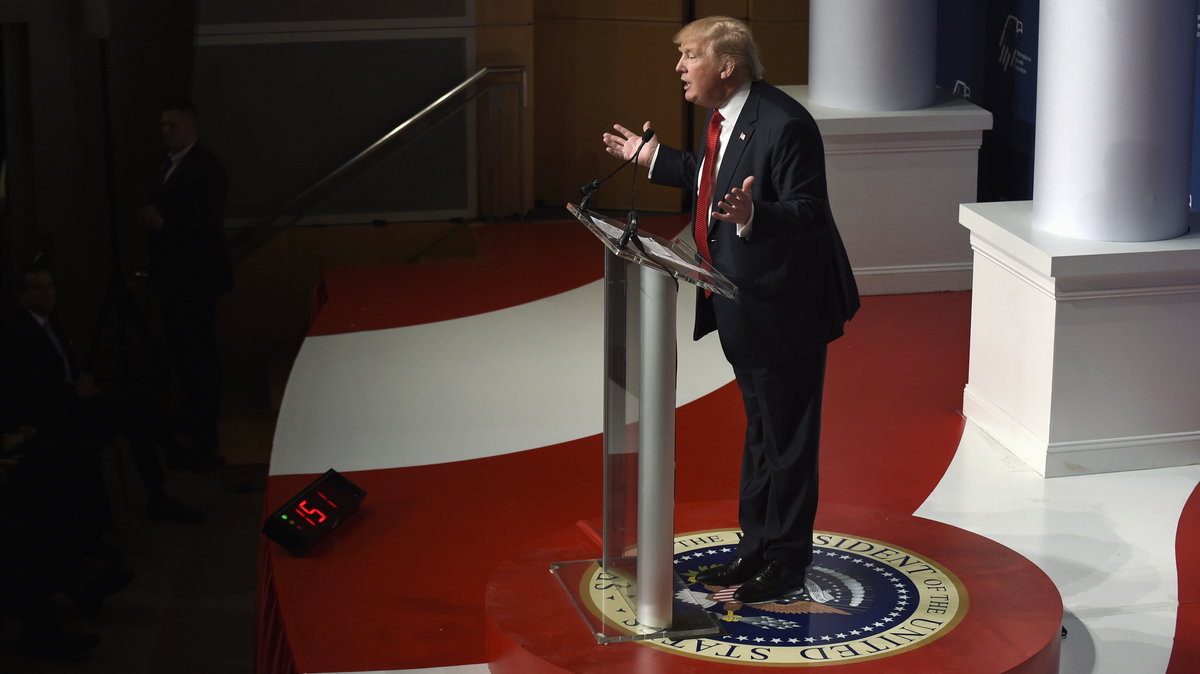 Fourteen Republican candidates are speaking Thursday at a forum hosted by the Republican Jewish Coalition in Washington, D.C. Comments made by front-runner Donald Trump are already garnering criticism on social media.

Trump spoke about Wednesday's shooting in San Bernardino, Calif., saying it "probably was related" to "radical Islamic terrorism." He criticized Obama for not using the term.

"I'll tell you what, we have a president that refuses to use the term. He refuses to say it. There's something going on with him that we don't know about," he said to applause.

As NPR's Carrie Johnson reported, the male suspect in the shooting is believed to have had some electronic contact with people overseas who were on the radar of U.S. national security officials. Authorities still aren't sure what that means, though, or whether it relates to motive in the attack.

Trump also tried to appeal to the Jewish audience, and his attempts have elicited strong reaction online — some criticize that he played right into stereotypes. "You just like me because my daughter happens to be Jewish," Trump said as he took the stage. He added that his daughter Ivanka has a great husband and is very happy, but "the only bad news is I can't get her on Saturday," referring to Shabbat, a Jewish day of rest.

He also spoke about Israel and Iran. "Obama is the worst thing that's ever happened to Israel," Trump said. "Look, I'm a negotiator like you folks; we're negotiators," he said, criticizing President Obama's Middle East policies and nuclear deal with Iran. "And by the way, did you ever see a negotiation take so long?"

"This room negotiates perhaps more than any room I've spoken to, maybe more," he said.

Asked about Israeli-Palestinian relations and Jerusalem, he said, "I believe I can put both sides together, but it'll take six months."

"By the way, Israel has given a lot ... but hasn't been given a lot of credit for what they've given." 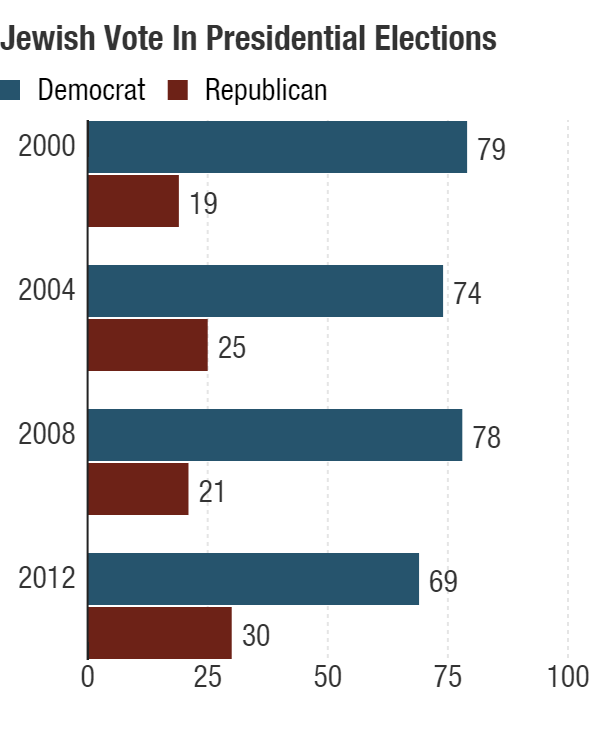 Pressed on whether he would state that Jerusalem is the "undivided capital of Israel," Trump was booed as he hesitated with his answer. "I want to wait until I meet with [Israeli Prime Minister Benjamin Netanyahu]."

The Republican Jewish Coalition isn't representative of Jewish voters nationally. Though the Republican Party has been making slight gains, Jewish voters overwhelmingly sided with the Democratic candidate in recent presidential elections. Obama won 78 percent of their vote in 2008, and 69 percent in 2012, according to the Pew Research Center.

After observing a moment of silence for victims of Wednesday's shooting, Ted Cruz, the first candidate onstage, acknowledged that the motive behind the shooting is still unclear. But he also took the opportunity to talk about the threat of terrorism. "All of us are deeply concerned that this is yet another manifestation of terrorism," he said, "radical Islamic terrorism here at home."

"This horrific murder underscores that we are at a time of war. Whether or not the current administration realizes it or is willing to acknowledge it, our enemies are at war with us." The nation, he added to applause, "needs a wartime president to defend it."

Cruz also repeated a call that's been echoed by several candidates on the right to refer to ISIS as "radical Islamic terrorism."

"When the president stands up and says the Islamic State isn't Islamic, that's just nutty," he said to some laughter.

Ben Carson tweeted ahead of the forum wishing the audience a "Happy Hanukkah coming up":

He is now facing criticism for mispronoucing "Hamas" (like "HA-mus," but you can listen for yourself at 03:38:43 here).

Trump to the Republican Jewish Coalition: "You're not going to support me because I don't want your money." What the hell does that mean?

And the Times of Israel went after Trump for "offensive stereotypes" in this headline:

A spokesman for the RJC told CNN that Trump was just playing to his audience. "Donald Trump is well aware of the composition of our board and our audience," Mark McNulty said, "one that includes many successful business men and women as well as deal-makers like him."

The Anti-Defamation League also defended Trump saying in a statement "we do not believe that it was Donald Trump's intention to evoke anti-Semitic stereotypes." The group's CEO, Jonathan Greenblatt, said Trump has made similar comments to other groups and that "in this case he is speaking to a group of Jewish Republicans, a significant portion of whom are business people."

"We do not believe he intended his comments regarding negotiations and money to relate specifically to their Jewishness, but we understand that they could be interpreted that way," Greenblatt continued. "We encourage him to clarify that this was not his intention, and that he rejects the traditional stereotypes about Jews and money."