Accessibility links
Dick Cheney's Bust Unveiled At The Capitol, As He's Lightly Roasted Former Vice President Dick Cheney returned to the U.S. Capitol on Thursday for a ceremony honoring his service as president of the Senate. Former President George W. Bush was among those honoring him. 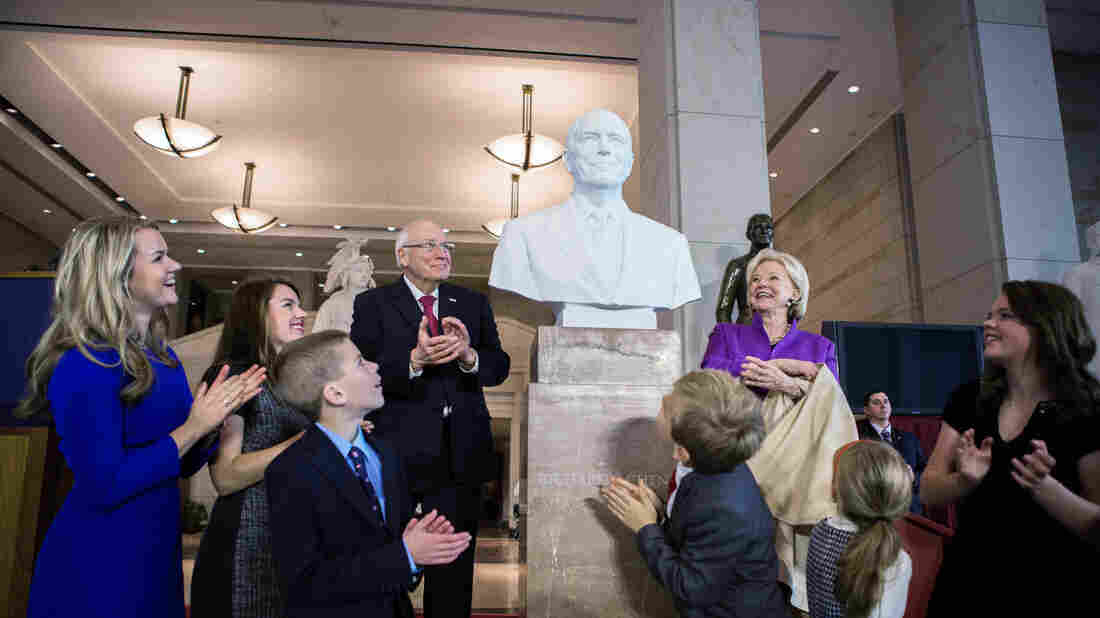 Former Vice President Dick Cheney, along with his wife and grandchildren, look on after Cheney's bust was unveiled at the U.S. Capitol on Thursday. Keith Lane/Getty Images hide caption 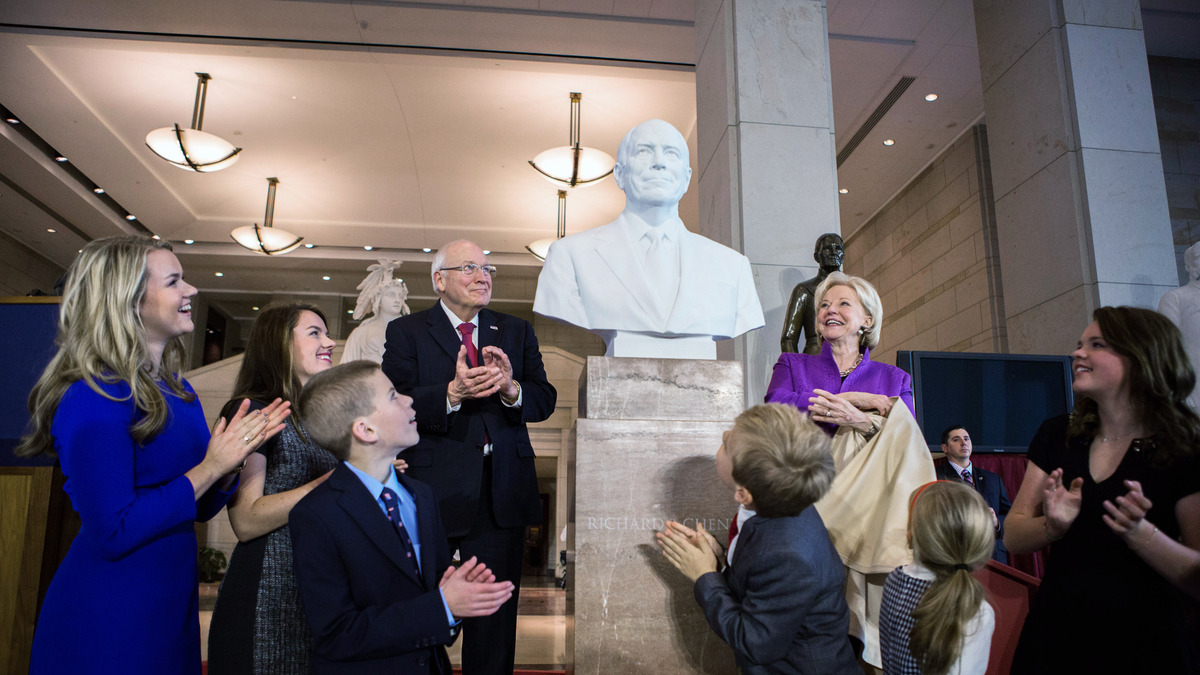 Former Vice President Dick Cheney, along with his wife and grandchildren, look on after Cheney's bust was unveiled at the U.S. Capitol on Thursday.

There's a new addition to the statue-lined hallways of the U.S. Capitol — a marble bust in the likeness of Dick Cheney.

It's a tradition — and a perk — afforded vice presidents since the late 1800s.

"Nobody could accuse Dick Cheney of living an inconsequential life," House Speaker Paul Ryan, R-Wis., said of the nation's 46th vice president, who played a strong role in the lead-up to the Iraq War.

He noted Cheney was in the White House on Sept. 11, that he'd been secretary of defense during the first Gulf War and that he was Gerald Ford's chief of staff after Watergate. 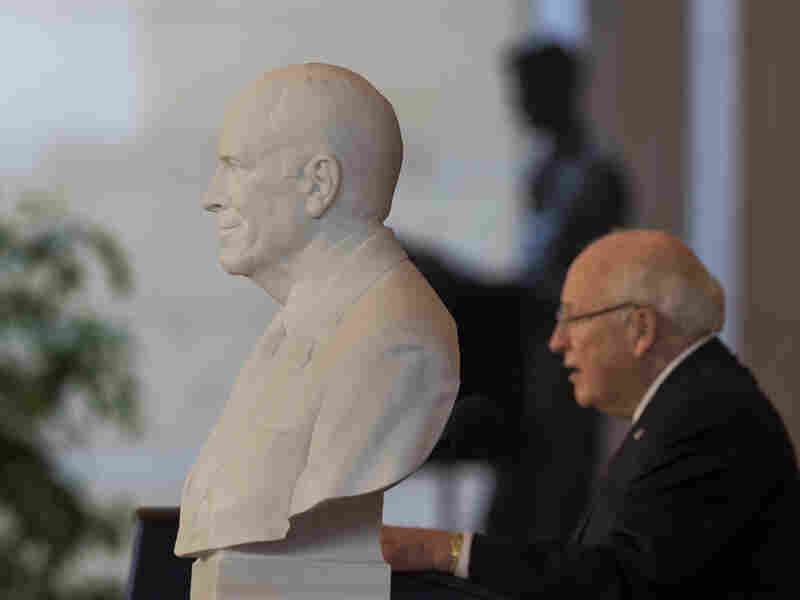 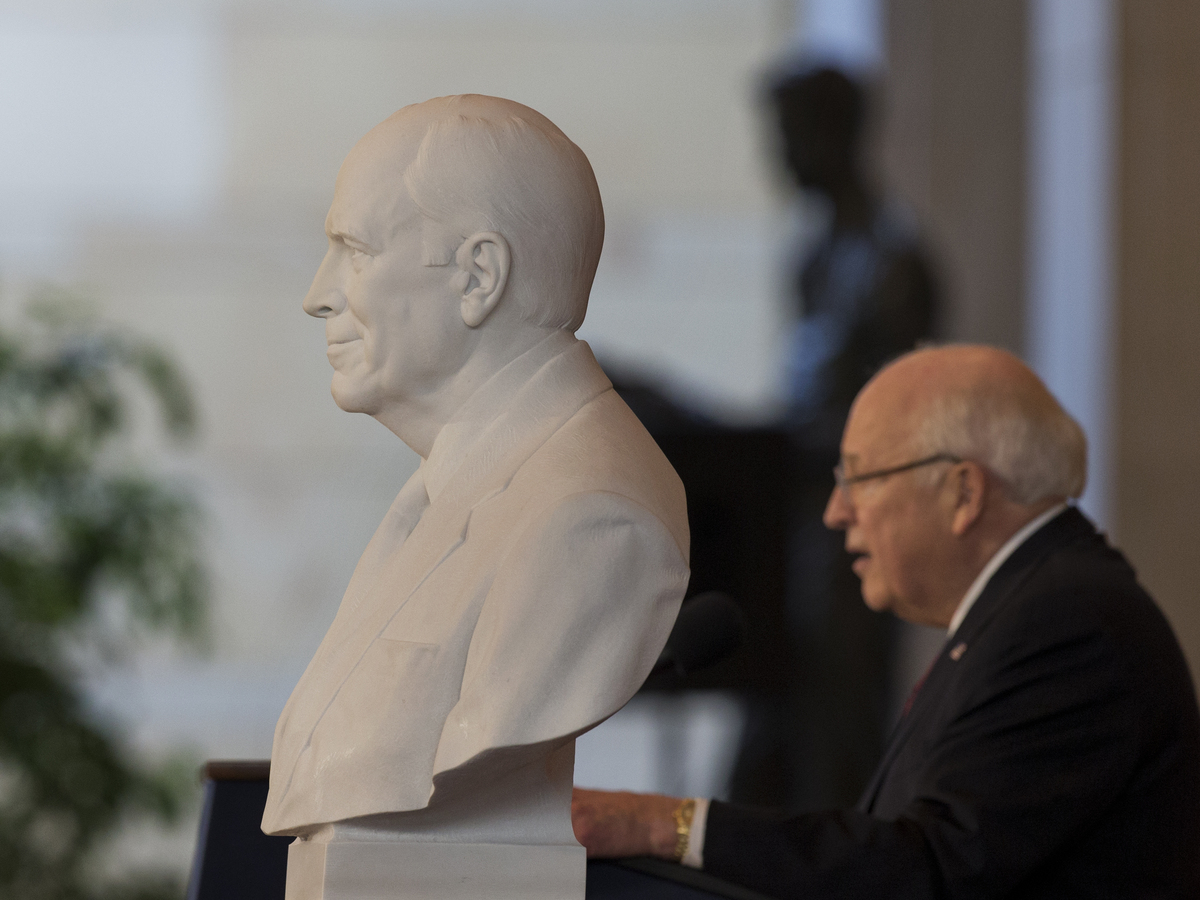 Bush made a rare Washington appearance to attend — and cracked, "He assured me that Dick's bust would be prominently displayed in an undisclosed location."

The "he" was Republican Senate leader Mitch McConnell.

There were jokes about Cheney as Darth Vader and about him once cursing at a Democratic U.S. senator on the Senate floor.

In a recent biography of George H.W. Bush, Bush criticizes Cheney — and his role in his son's White House. That was fodder for the younger Bush.

"I told Mother and Dad I was coming here for the bust unveiling," Bush began before delivering the punchline. "Dad perked up, and he said, 'Send my best regards to old iron ass.' "

"Iron ass" was the name the elder Bush used to describe Cheney in that biography.

The only Democrat onstage was Biden. He and Cheney have been political combatants for decades, but not on Thursday.

"I actually like Dick Cheney," he said to chuckles from the crowd.

This was not an event for Cheney critics — on the war or torture or related topics.

Biden instead pointed to the kindness Cheney and his family showed him after the death of Biden's son Beau earlier this year.

Finally, came time for the unveiling. The likeness, if not uncanny, is very good. The marble Cheney delivers a cold stare. And the sculpture also reveals just a hint of that thin, dry smile Cheney became so well known for.

Cheney has never been the sentimental type, nor was he Thursday.

"I reminded Lynne this morning that if the Cheney family had not moved to Casper, Wyo., in the early '50s, we never, never would have met," he said as his family and wife, Lynne, looked on from the front row. "And she said, 'Right, and today, we'd be dedicating his marble bust.' "

Then, Cheney did some reflection, imagining what he'd want a future visitor to the Capitol looking at his likeness to think.

"I would want them to know this much at least — here, was a believer in America," he said, "so fortunate in his life experiences, so blessed in his friends, so grateful in all his days to have served as vice president of the United States of America."

The audio of this story, as did a previous Web version, incorrectly states Dick Cheney was the nation's 45th vice president. He was the 46th.