Accessibility links
Why Aren't Ads Buying GOP Candidates Better Poll Numbers? Trump has spent a tiny fraction of what Jeb Bush has spent on TV ads, but the former reality TV star remains unshakably at the top of national polls. 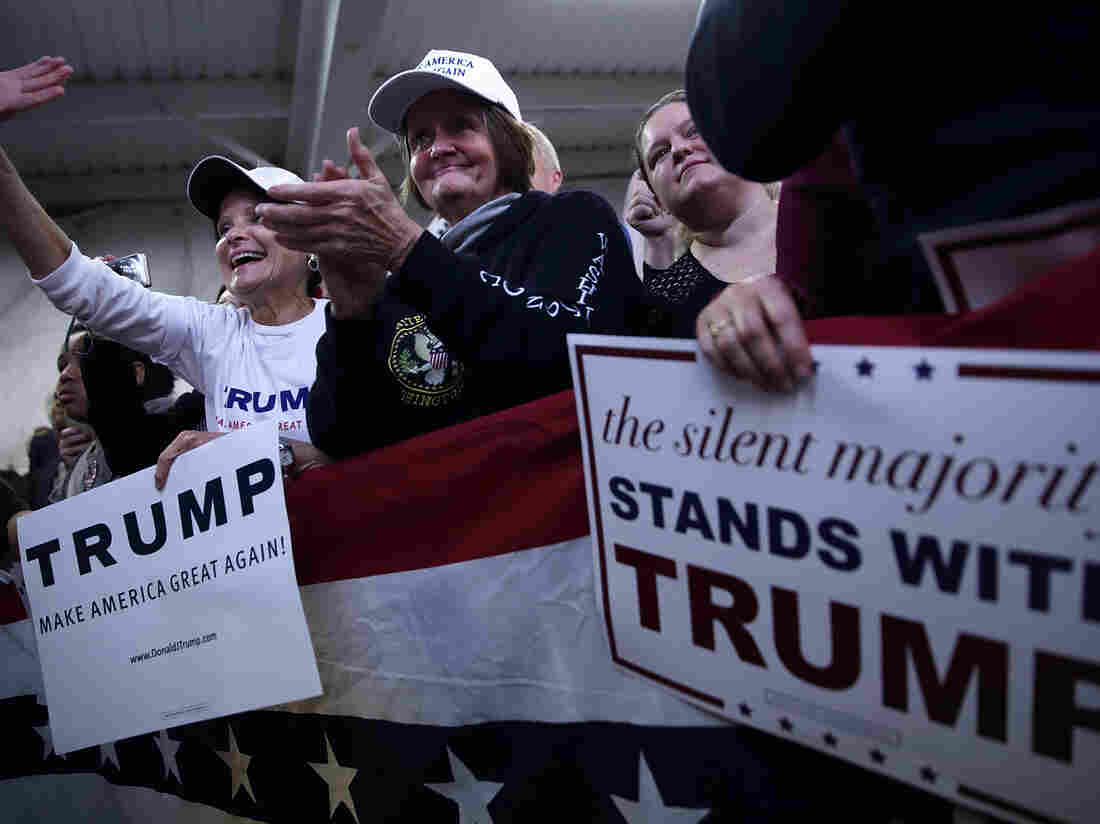 With supporters as fervent as these, Donald Trump has found he doesn't need TV ads to stay afloat in the packed GOP field. Alex Wong/Getty Images hide caption 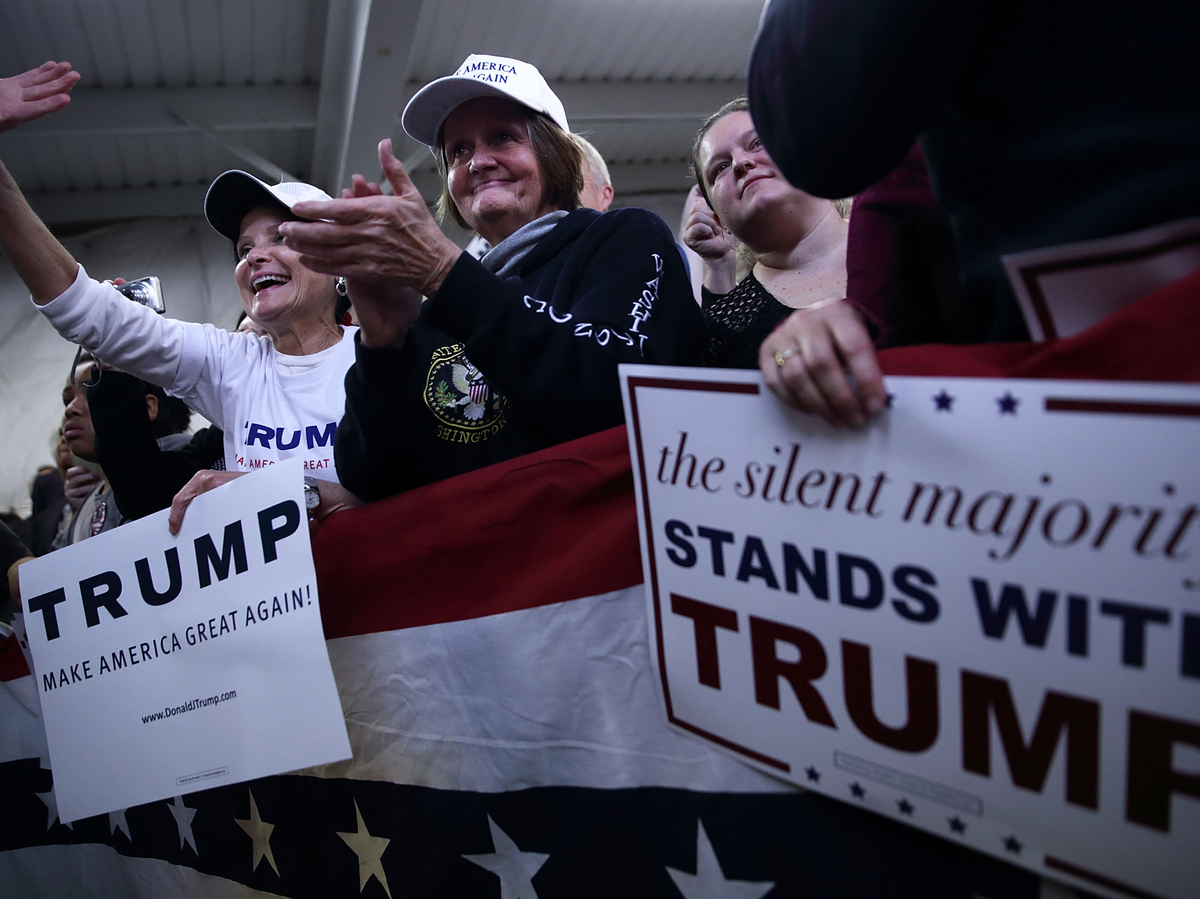 With supporters as fervent as these, Donald Trump has found he doesn't need TV ads to stay afloat in the packed GOP field.

TV ads are unavoidable during a presidential election campaign — just ask the Iowans and New Hampshirites being bombarded with advertisements right now. So why aren't those TV spots seeming to do much good for some Republican candidates?

The latest ad-spending data show the man who has almost constantly led the polls for four months now, Donald Trump, has spent virtually no money on television ads. Meanwhile, Jeb Bush and his allies have outspent the other Republicans and the superPACs supporting them, but Bush remains mired in the middle of the pack, according to the data from SMG Delta and reported by NBC News. (Note: The data cover spending on ads already aired, not spending on ads that have yet to go up.)

Lots of pundits have pointed out the strangeness of this phenomenon, but to get a better sense of just how that imbalance looks, we decided to visualize it. Here's a look at total TV and radio ad spending versus polling averages as of Dec. 1:

But ad spending is cumulative over time, whereas polling at any given point is a snapshot of where candidates stand. Past spending and today's poll numbers might be related, but probably not as much as the past few weeks of ad spending.

So here's an additional dimension: How has ad spending since September changed along with polling? We cut it down to the five top-polling candidates to see how that looks. Here's the result:

(True, these are national polls, and a lot of the ad spending is going on in Iowa and New Hampshire, but the polling trends in those states — especially among these top candidates — is similar to the national trends currently.)

This is one of the most startling truths of the GOP nomination race: Candidates like Trump and Ben Carson have managed to hold steady with remarkably little broadcast or cable spending, while Bush's polling average has slipped despite the onslaught of ad spending. As of Sept. 1, he and his superPAC had not aired any ads. But since then, they have surged to the lead of the spending pack.

So what's going on? Here are a few of the dynamics that might explain what's behind these eye-popping trends:

1. The superPAC-campaign divide. SuperPACs generally pay way more per ad than campaigns do. The superPAC supporting Bush, Right to Rise, is doing 98 percent of his TV ad buying, according to NBC, and that means Bush is getting less advertising for the money than, say, Ted Cruz, whose campaign is buying most of the ads airing on his behalf.

This is one of the big trade-offs of superPACs — while they can raise unlimited amounts, they also have to spend more for airtime, already one of the biggest expenses of running a presidential campaign.

2. Ad spending as a life preserver, rather than a rocket booster. Pardon the mixed metaphor here. The ad spending arms race is one reason a candidate can sometimes throw more and more money at advertising for little return. When one's opponents are themselves buying more visibility, it means having to spend all the more to keep up. Had his campaign and superPAC not shelled out tens of millions of dollars over the past three months, Bush might have slipped even further in the polls.

The flip side to that is the plenty of free publicity that some, like George Washington University political scientist John Sides, argue has bolstered Trump from the start. Media coverage helped launch Trump, Sides has written, and, as he rose in and remained atop the polls, it helped cement Trump's place there.

3. Or maybe ads just don't work. It may be silly to expect a relationship between ads and polling anymore, in part because of saturation. As GOP political strategist Mark McKinnon told NPR's Robert Siegel this week, "There's just very little return on media dollars anymore in politics, because people just don't believe political advertising. They're just demanding authenticity and something that they think is real, and they know that advertising is not real. So, you might as well just burn that money."

Consider that the two men atop the polls — Trump and Carson — are political "outsiders," a story that plays well among the many GOP primary voters who are frustrated with Washington. If a voter wants that kind of candidate above all things and views Marco Rubio or Bush as "the establishment," no number of ads will sway her to vote for either of those men.

Of course, broadcast ads aren't the only ads — for example, digital ad spending could grow by nearly 600 percent over the 2012 election, by one estimate, ultimately reaching nearly $1 billion (compared with TV's $4.4 billion). However, they do reach a huge majority of the voting-age population. That kind of access to millions of living rooms is understandably worth a lot of money. It's just not clear exactly how much support that money buys.

Above all, though, message matters. If what a candidate is trying to get across doesn't resonate with voters, no amount of money spent on ads will help convince them.