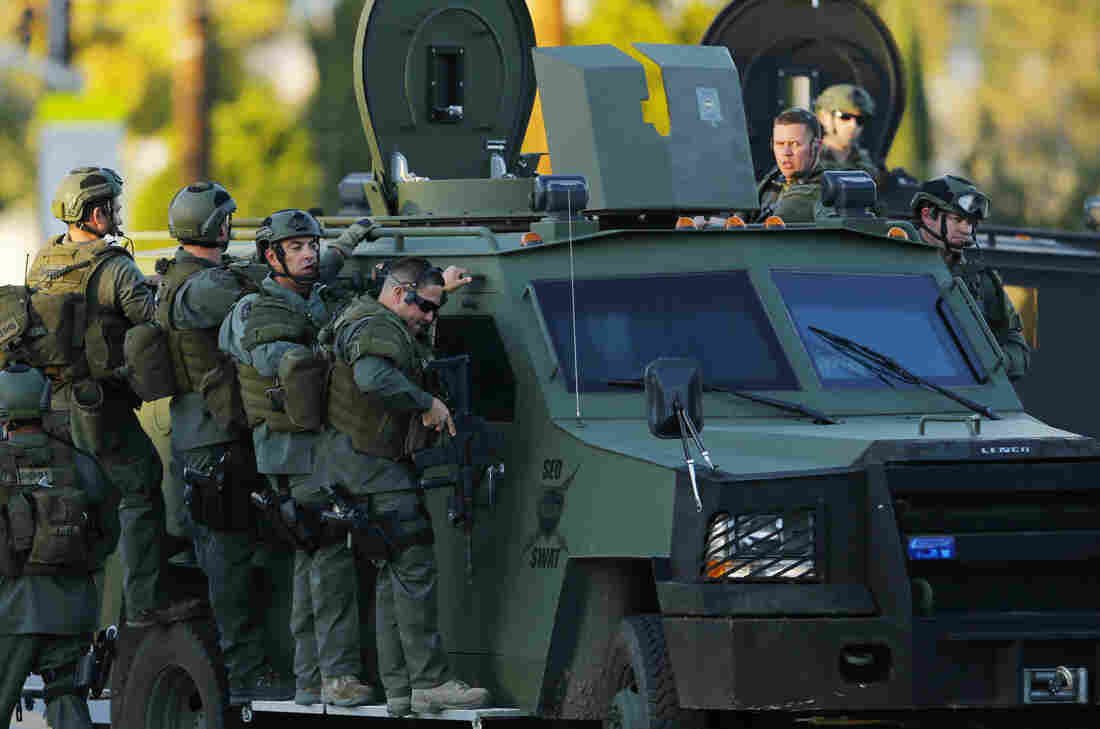 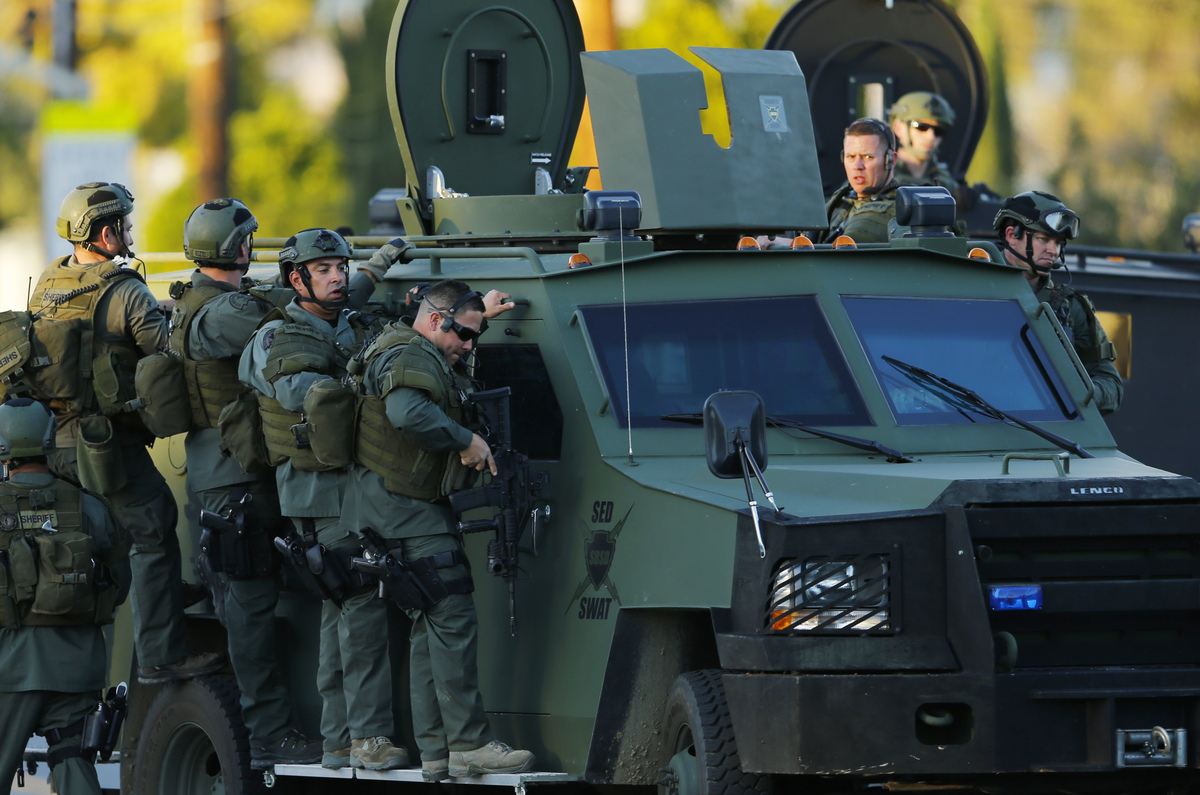 Police officers conduct a manhunt after a mass shooting in San Bernardino, Calif., on Dec. 2, 2015.

On the day of the mass shooting in San Bernardino, Calif., the city's SWAT team was training for an active shooter situation just minutes away from the scene of the massacre.

"We were just working through scenarios when this call went out," says Lt. Travis Walker, the SWAT team commander.

[I]t's not that we seek to militarize law enforcement. The goal is to try to make sure that we reduce the number of human casualties.

Walker says they'd decided to train on Wednesday in part to learn some lessons from the deadly shooting in Colorado Springs, Colo., last week. This response isn't unique to San Bernardino; in the weeks since the terrorist attacks in Paris, local law enforcement agencies around the country have been preparing for the possibility of more challenging attacks. In San Bernardino on Wednesday morning, Walker was running his officers through scenarios with volunteers playing the role of shooters.

"We'd just finished a training scenario that involved multiple shooters at multiple locations within a small confined area," he says.

And then they were off — to the scene of a real-life multiple-shooter attack. They didn't get there in time to stop it, but the suspects were killed in a shootout later in the day. Walker and his team were there for that, too, using armored vehicles to get close.

That scene was meaningful because those were the very same kind of armored vehicles that for the past year or so have become a symbol of what some people call police militarization, something that's gotten a bad rap since the Ferguson, Mo., protests last year.

Walker says now people can see why they have the heavy gear.

"Society has changed, weaponry has changed that individuals have access to," he says. "And it's not that we seek to militarize law enforcement. The goal is to try to make sure that we reduce the number of human casualties."

What went through my mind was the fear that people were going to jump to the conclusion that, oh, my gosh, we have to go back to just being warriors.

Along with the attacks in Paris, the San Bernardino massacre is being seen as vindication of the idea that American police have no choice but to train and gear up for military-style confrontations.

"I believe the equipment is necessary," says Mark Lomax, executive director of the National Tactical Officers Association. "Because we're one of the few countries in the world where our military doesn't have any legal authority inside the country," and he says police are simply the first line of defense for increasingly sophisticated shooting attacks.

Most policing experts agree this kind of gear is needed, but some of the more reform-minded experts are also apprehensive. They're watching for the fallout from attacks like this.

"What went through my mind was the fear that people were going to jump to the conclusion that, oh, my gosh, we have to go back to just being warriors," says Sue Rahr, who runs the police academy in Washington state. Rahr was part of President Obama's Task Force on 21st Century Policing, where she argued strongly for police to think of themselves less as warriors and more as "guardians."

"Frankly, the most important thing we can do is figure out ways to prevent or predict when these are going to happen so we can stop them before they happen," she says, "because there's no way — with the best training and equipment in the world, we [only] have about two or three minutes before the worst of it is usually over."

Rahr says even with military-style training and gear, police should think like guardians. And San Bernardino may be a case in point. Walker recalls the active-shooter safety classes his officers have been teaching in the community. He says they taught one of those classes at the Inland Regional Center last year, and on Wednesday his men saw people there using those techniques, something he believes saved lives.