Accessibility links
Presidential Candidates Still Like To Party House party, that is. Even as campaigns get larger, candidates who want to win in New Hampshire continue to meet voters one-on-one. Why does this curious tradition survive? 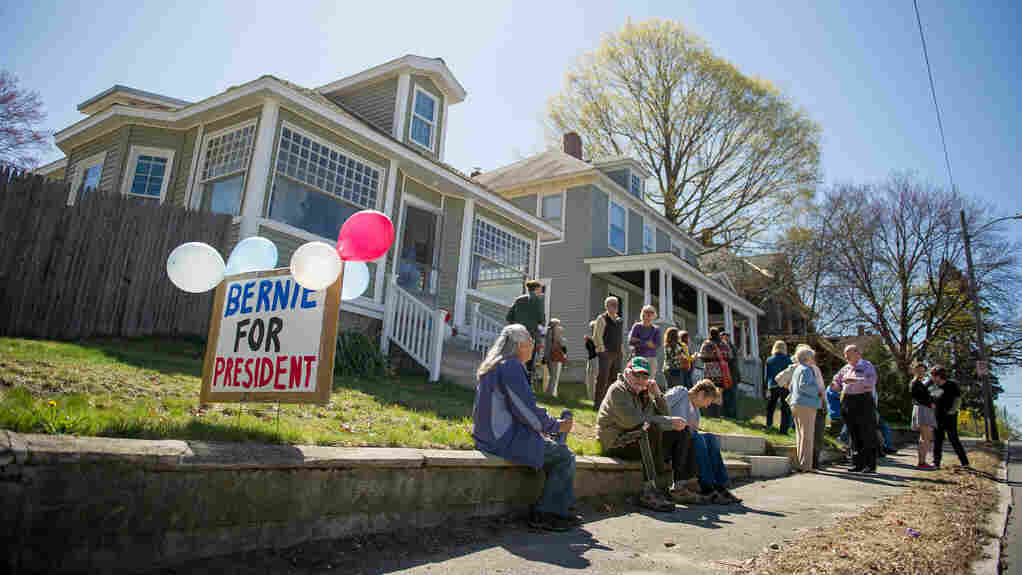 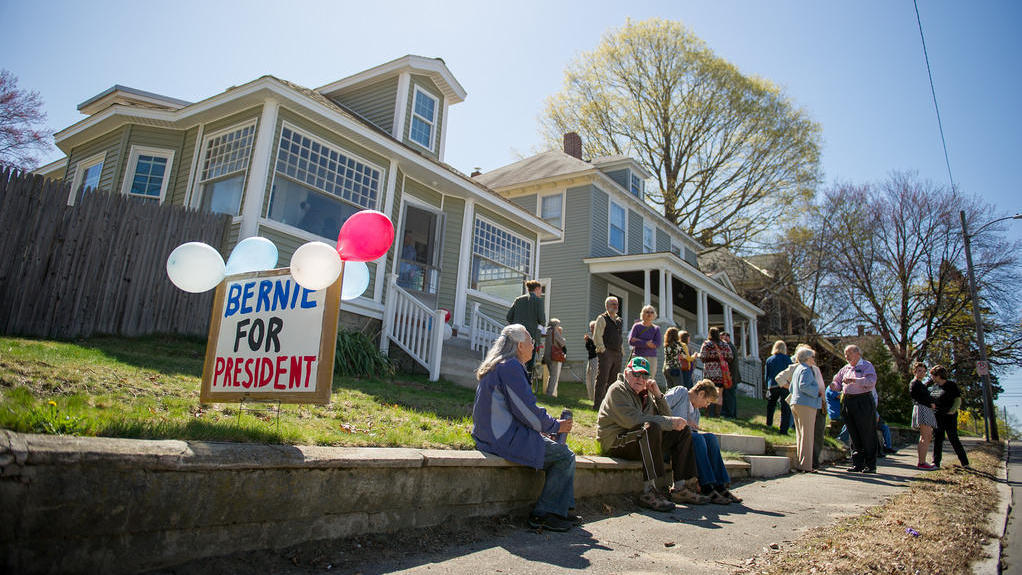 Supporters wait outside a house party for Bernie Sanders in Manchester, N.H.

Huge rallies with thousands of supporters. Ad buys that try to reach millions of voters. Those are the hallmarks of modern presidential campaigns.

But there's a good chance the next president will have also spent some time getting to know voters one on one in much smaller settings — like Rich Ashooh's living room.

For a man who's about to host 100 people, many of them strangers, Ashooh sounded pretty calm.

There was no last minute straightening up, no moving furniture, no running into the kitchen to set out more appetizers — after all, he said, "less is more with some of these house parties."

Ashooh and his wife, Lori, have been hosting presidential candidates going back to Bob Dole in the 1988 campaign. This day's event, for Carly Fiorina, is his fourth of 2015.

While some house parties can feel more like weddings, with lavish decorations and mountains of food, Ashooh kept it simple. "It's not our job to feed people — I'm Lebanese, we're going to put something out, because you have to be that way. But that's not why they're here."

It's clear why they're here — voters come to house parties to see presidential candidates up close. 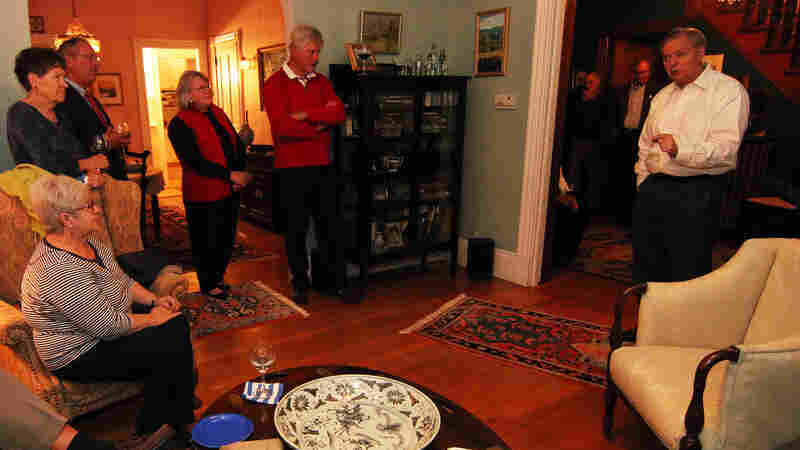 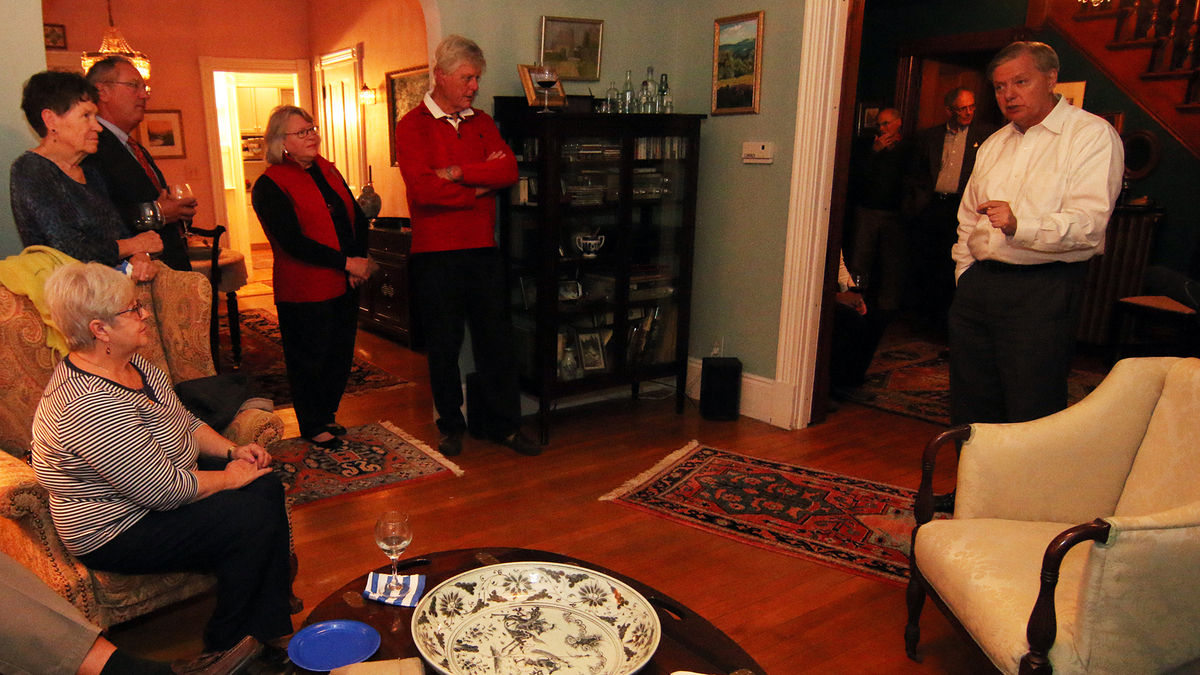 Ashooh is here because presidential campaigns in New Hampshire have, for decades, turned to politically connected locals like him to play host for an evening. Ashooh certainly fits the bill: a former executive with BAE Systems, a major Granite State employer, and a former GOP congressional candidate, he's a well-known and respected figure in state political circles.

But why is it, that in an era of big data and big money politics, candidates still see value in these smaller, more informal gatherings?

"You do, in New Hampshire, still pick up votes one at a time, by meeting people and answering their questions," said Drew Cline. He hosted his first house party this summer, after seeing them up close for years when he was the editorial writer for the New Hampshire Union Leader.

He says the host's real job is to serve as a political matchmaker, introducing candidates to potential supporters they might not otherwise meet.

"We wanted genuine undecided voters to come," Cline said of his house party for Florida Sen. Marco Rubio, "And that's what we got ... We only had a couple people who showed up because they were already supporters and they wanted to make that connection. Almost everyone there was still trying to make up their minds."

Cline said Rubio stayed so long guests had to use flashlights to find their cars. But as he learned at a different event weeks later, the Florida senator's efforts at the party paid off. "There was a woman behind me in the corridor who was talking to a friend, who said, I like Rubio, I got to see him at this house party in Bedford. I turned around and said, 'that was my house!' It shows you how much these things really matter."

House parties aren't the only way New Hampshire voters can get direct access to candidates. There are still town hall style events, meet and greets at local restaurants, and walks through downtown districts.

But the access at house parties is particularly special for voters and valuable for campaigns, said Ron Abramson, who hosted an event for Democratic hopeful Bernie Sanders this year. "If you show up at a large event and you hear a candidate speak and you have a good feeling about them, you may be more inclined to vote for them," Abramson said. "If you meet that candidate in a more intimate setting, you're probably more likely to work for them. It is a critical component of a grassroots movement or organization in a state where that still makes a difference." 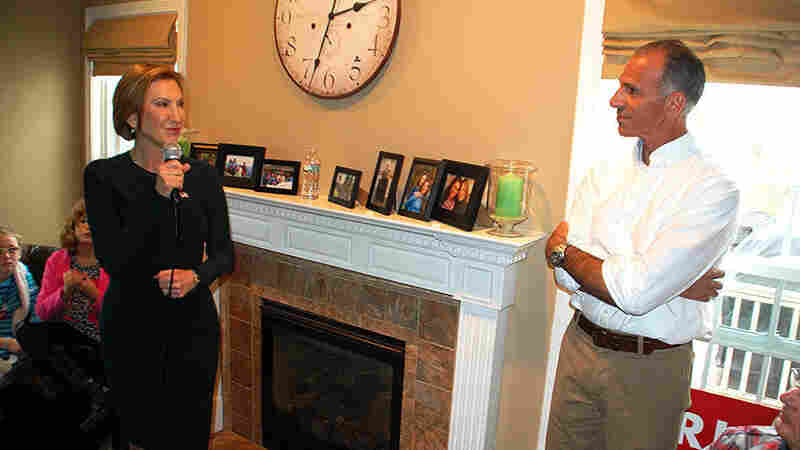 Carly Fiorina speaks at a house party event at the home of Rich Ashooh (right) in Bedford, N.H. in November. "Less is more with some of these house parties." Ashooh said. Brady Carlson/NHPR hide caption 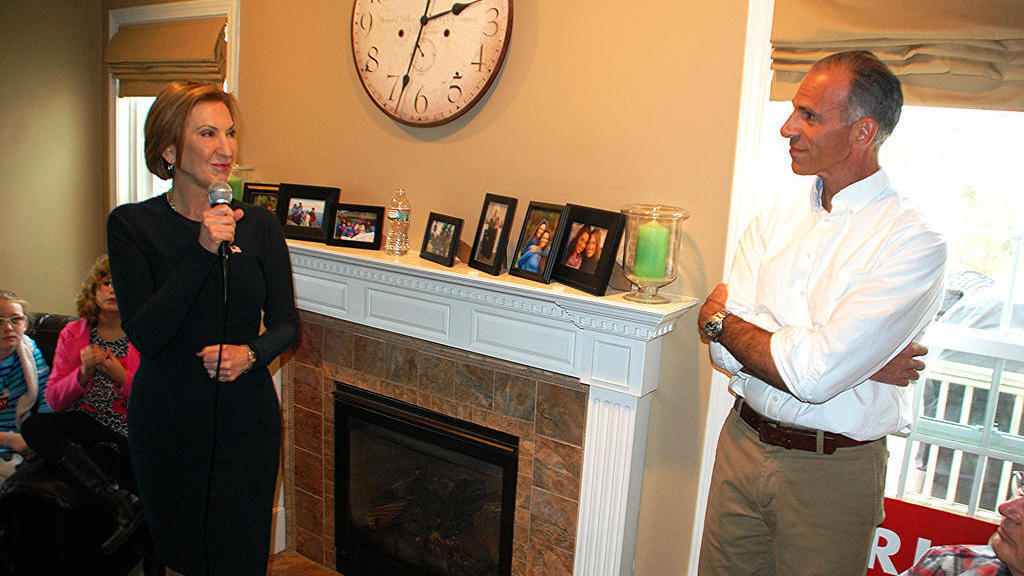 Carly Fiorina speaks at a house party event at the home of Rich Ashooh (right) in Bedford, N.H. in November. "Less is more with some of these house parties." Ashooh said.

A candidate can even pick up an insider tip or two at a house party. Debby Butler remembers hosting an event for Vermont Gov. Howard Dean in the 2004 campaign. "My son had this Live Free or Die plaque on the wall. Howard said something about 'that's just an awful slogan!' And my son, who was maybe 12 or 13 at the time, said 'Careful, Dr. Dean, my relative wrote that slogan!'" Butler laughed at the memory. "Only in New Hampshire could a little kid tell a presidential candidate to back off!"

At Rich Ashooh's house in Bedford, no one is told Carly Fiorina to back off. She was surrounded by people looking to ask questions, take pictures or just shake hands. After introducing Fiorina individually to each guest, Ashooh introduced her to the group.

"There are many friends of yours here," he said, "and friends you don't know you have. So without further adieu, we want to thank you for being here, welcome to our home, and we look forward to hearing what you have to say."

As he turned the microphone over to Fiorina, his job as house party host was complete.

The rest is up to the candidate.