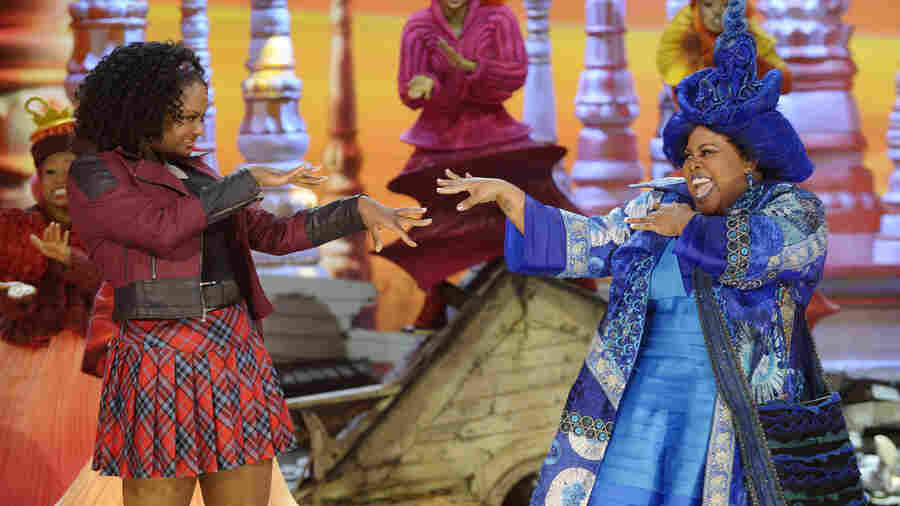 Shanice Williams and Amber Riley were two of the stars of NBC's The Wiz Live! Virginia Sherwood/NBC hide caption 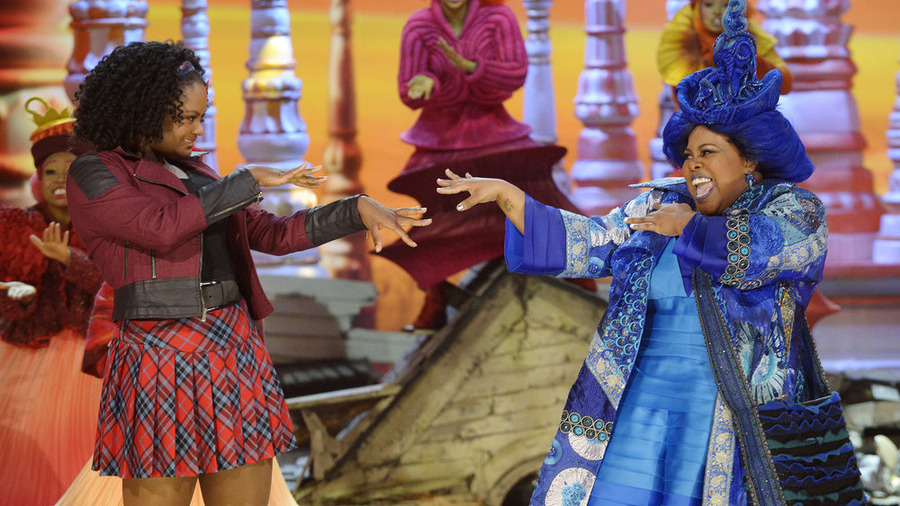 Shanice Williams and Amber Riley were two of the stars of NBC's The Wiz Live!

When NBC first considered bringing The Wiz Live! to television, the network couldn't have known how much America would need to see this.

At a time when the country is reeling from mass shootings, protests over police killing black teens, and presidential candidates railing against immigrants and refugees, there is no better time to experience a soothing, expertly executed celebration of family, friendship and black culture.

Because, make no mistake, The Wiz that NBC brought to the air Thursday night was fully and fearlessly filled with blackness – a truly African American-centered take on The Wizard of Oz. From the gospel touches Glee alum Amber Riley and R&B queen Mary J. Blige brought to their roles as Good Witch Addaperle and Bad Witch Evilene to the vogueing dance moves of folk in the Emerald City and Dorothy's lines about her "squad" of friends.

In fact, newcomer Shanice Williams emerged as a full-fledged star Thursday. The 19-year-old New Jersey native vaulted effortlessly from the gee-whiz enthusiasm of Dorothy's most earnest moments to the independent spirit a sister sometimes needs to keep some brothers in line.

The script, with new material penned by Harvey Fierstein, was based on the Tony-winning Broadway production and not the ill-fated 1978 film. This new Wiz crackled with updated references to iPads, sushi and shade.

The list of spine tingling performances was endless. Stephanie Mills, the original Dorothy in The Wiz's 1975 Broadway run, returned to prove she's still got pipes playing Auntie Em. Emmy-winner Uzo Aduba made viewers forget her turn as Crazy Eyes in Orange is the New Black with a powerhouse performance as Good Witch Glinda, belting out the signature tune "Believe in Yourself."

Singer/songwriter/producer Ne-Yo proved to be the breakout star as the Tin Man, with standout singing and a down-to-earth take on the metal man which was a charming callback to Nipsey Russell's performance in the movie.

Many times Thursday, it was the small touches which worked best. When Queen Latifah first emerged as The Wiz, Dorothy and her crew repeatedly treated the character as a man, sparking comments online about Latifah playing across gender.

But when the classic scene unfolded where they discover The Wiz is a fraud, they also discover he is a she – a skillful bit of gender bending that felt like a trademark nod from Kinky Boots author Fierstein.

In a sharp contrast to the insults that filled social media during NBC's last two live musicals – Peter Pan and the Sound of Music – love for The Wiz Live! exploded online as the show progressed. "THANK YOU NBC!" producer/actor Tyler Perry tweeted. "Thx for the courage to put this on the air. I feel like I'm 7 again watching this, only from a better neighborhood." Kristen Chenoweth, who starred in another Oz adaptation, Wicked, messaged, "Loving this one!!"

More importantly, a wide range of average viewers — some of whom might be considered members of that tastemaking group media likes to call Black Twitter — embraced the production, too. One account named @Beautifully_C tweeted: "#‎TheWizLive is serving natural hair, black vernacular, black gays, black non gender conforming ppl...it is LITTTT." And @dray noted: "#‎TheWizLive is a reminder that we are, and have always been, more than our pain. Black is joy, too."

The biggest problem with The Wiz Live! was clumsy camerawork. Shots often focused too tightly on performers during crucial moments – particularly when special effects such as fireworks or explosions were deployed around them.

Commercial breaks were too frequent and too intrusive; they felt like jarring interruptions instead of natural pauses in the action. Director Kenny Leon (A Raisin in the Sun) and the NBC crew get a few demerits for these issues.

And the lack of a studio audience, which also sucked the life out of the network's previous live outings of Peter Pan and Sound of Music, robbed some triumphant moments in The Wiz of a little sparkle.

It would have been wonderful to see the cast come out for a well-deserved post-show curtain call. But that would have been awkward without sustained applause. Time for NBC to consider bringing in a live crowd for the energy and pacing it provides.

But this feels like nitpicking. The production was easily the best of NBC's live musical events and one of the most inventive, eye-catching, expertly executed pieces of television this year.

Viewers seemed to agree. NBC says overnight ratings showed 11.5 million people watched the show Thursday night, beating the ratings for last year's Peter Pan by more than 2 million. Expect those totals to rise as delayed viewing by DVR is factored in over the next few days.

From its earliest beginnings, The Wiz has been a proud example of how the most traditional elements of American pop culture can be transformed and made even more enjoyable by blending with black culture and talented black performers.

Seeing a major broadcast network like NBC revive a show with that message at this time was a wondrous thing. Watching The Wiz Live! (you can catch it online if you missed it, or watch a rerun at 8 p.m. EST Dec. 19) confirmed the power of diversity to create compelling television.