Accessibility links
'The Blizzard' May Leave You Cold Vladimir Sorokin's surreal road trip novel follows a doctor rushing through a blizzard to deliver a vaccine to a zombie-plagued village — but that rich premise is let down by clunky, uneven prose.

'The Blizzard' May Leave You Cold

'The Blizzard' May Leave You Cold 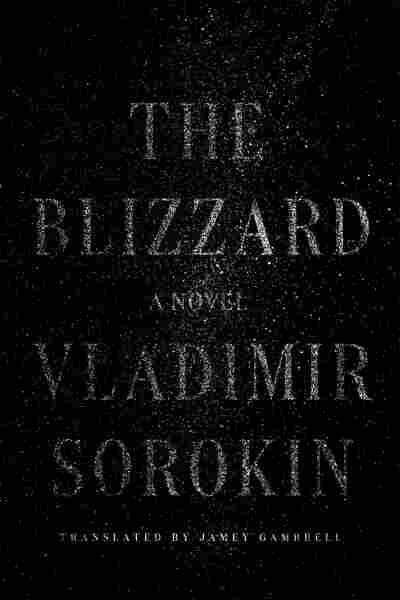 by Vladimir Sorokin and Jamey Gambrell

Doctor Platon Ilich Garin, the protagonist of Vladimir Sorokin's The Blizzard, needs a ride. He has in his possession a vaccine to end a zombie outbreak in a distant village, where the dead are rising from beneath the earth of the winter-frozen cemeteries. He is — so he thinks — single-minded in his pursuit; he absolutely must get there as soon as possible. After berating and threatening a stationmaster, he hires himself a driver, a man named Crouper who has a team of 50 chirping miniature horses, "each one no bigger than a partridge." They set out across the landscape together, feeling mutually optimistic. Soon, though, they've broken the sled's runner on some mysterious crystalline pyramids under the snow — and their journey goes completely sideways.

But there's more than just a ferocious blizzard, mangled sleds, wolves, and the Russian countryside in their way: there's everything from the doctor's lust for the buxom wife of a Thumbelina-sized miller, to his weakness for a new kind of hallucinogenic drug, to a frozen, dead giant. Crouper's unflagging optimism and his love for his tiny, dog-like horses serve as a steady contrast to the doctor's shifting emotional state, which goes from anger to shame ("He was ashamed of his weakness, and he was also ashamed of his shame, and then ashamed of this double shame. He became indignant and cursed himself abruptly and furiously.") to chemical-induced gratitude to anger again. Every step of their trip that isn't slowed down by circumstance is hindered by his indulgences: sex, sleep, drugs, drink.

The Blizzard is a chapterless, Odyssey-like journey, less about whether or not the doctor will arrive at his destination than the existential crises that plague him along the circuitous, artificially prolonged trip.

In the end, 'The Blizzard' left me wanting a better version of itself, and deeply sad that I didn't get it.

This setup is intriguing and rich with possibility. But mostly, The Blizzard left me cold. The prose is uneven: at its best moments, it's clear and straightforward, but at its worst it is positively cringe-worthy. (Whether or not this is Sorokin himself or Jamey Gambrell's translation is unclear.) The doctor's central problem — that he is unable to resist any kind of temptation, and continually curses at turns of events that are mostly his own fault — becomes boring and predictable after a stretch. His odiousness is interesting, but there's a lack of depth, a lack of engagement with his character that's frustrating in the extreme.

This seems particularly astonishing in the face of the novel's strange, engaging, surreal vision of Russia. The best part about The Blizzard is its worldbuilding: half-SF, half-fantasy, a kind of ecstatically-built universe whose details are, if nothing else, surprising — living, self-building felt structures, androids called Vitaminders who produce intoxicating drugs, bird-sized horses, samovar-sized men, literal giants. There is something delightful — you might call it steampunk — about holograms and pince-nezes existing side-by-side in the same text.

And a few scenes stand out, pleasurably, in their weirdness: like one in which the doctor takes a new kind of drug that immerses him in a vivid, terrible hallucination, meant to give him appreciation for his actual life, or Crouper's memory of a massive butterfly as both men huddle for warmth with the horses, or when they must chop away futilely at a frozen giant's massive nose to continue on their way, flecks of cartilage and frozen mucus littering the snow. Crouper is the novel's most compelling character; he is tender and funny and heartbreaking to the end.

In the end, The Blizzard left me wanting a better version of itself, and deeply sad that I didn't get it.